Across the country, people woke to the alarming news: police were breaking families apart, assigning fathers and mothers, sons and daughters to legal limbo as they prepared to deport them. Citizens rubbed their eyes, but should not have been surprised. Their newly installed government, led by an aged man with questionable morals, had won support by spinning stories of national decadence and decline. Parading its religious faith while demonizing those who did not share it, protecting the people by creating categories of “others,” the government had already issued a series of laws to realize their program. As for the people, they went about their lives, some thrilled by and others indifferent to the laws. Until, that is, the morning they awoke and saw, with their own eyes, the horrifying human consequences of government decrees.

In France, this year marks the 75th anniversary of les rafles: the round-ups in Paris and other cities across the country of tens of thousands of foreign and French Jews. Though France was under German occupation, French officials alone carried out the rafles. French police, knocking at doors and stopping people in the streets, bundled away those guilty of being Jewish. Dumped into empty stadiums or unfinished apartment complexes, these men, women and children — deemed threats to the nation — were eventually packed into French trains and shipped off to death camps.

These actions were the fruit of anti-Semitic legislation introduced two years earlier by Vichy, a regime led by Philippe Pétain. In 1940, quite suddenly and unexpectedly, this elderly WWI hero achieved control of a nation that, well, hoped to be great again. He adored being adored by big crowds, published books under his name that he had others (including Charles de Gaulle) write for him, and scandalized the Church when, at the age of 64, he married a divorced woman 22 years younger than he was. In public, he presented himself as a patriarch and savior of the nation; in private, he pressed for anti-Semitic laws and making deals with Nazi Germany.

Until 1942, Pétain had enjoyed widespread support, despite his regime’s inability to soften the great weight of the German occupation and improve the material lives of the French. But with the rafles, the spell was broken and public opinion turned against the regime. What had been abstract measures couched in bureaucratic language became suffering flesh and blood. In building stairwells and street corners, passers-by gazed as police herded entire families onto buses. At train stations, travelers witnessed fathers and mothers loaded onto trains, while their children were kept behind on the platforms. In the southern city of Nîmes — where I spent two years doing archival research — most residents expressed horror at these sights. In one typical letter, the writer reported what he saw at the local train station: “Jews were arrested all day and all night…It is terrible that men can be so evil.”

There are echoes of Vichy’s actions in President Trump’s executive order, dubbed “Protecting the Nation from Foreign Terrorist Entry into the United States,” that went into effect last Friday night and is now causing havoc across the globe and United States. There are, obviously, many crucial differences between the nature and actions of Trump’s government and Pétain’s regime. One was democratically elected by a nation at peace, while the other came to power in a country whose institutions had crumbled under the German onslaught; one retains three functioning and independent branches of government, while the other was slapdash, starved of funds and increasingly subservient to German authorities; one has a free and critical media, while the other exercised draconian censorship. And, of course, Houston’s football stadium will be used to host next Week’s Super Bowl, not to imprison men and women deemed dangerous and undesirable.

It happens that Houston is also host to the family of Haider Sameer Abdulkhaleq Alshawi. An accountant who has worked for American firms in his native Iraq, Alshawi had secured a refugee visa thanks to his work for the American military. Nevertheless, customs officials detained Alshawi last Saturday night at Kennedy Airport; it was only Sunday morning, after being held incommunicado, that he was released. Alshawi’s wife requested that her address not be identified from fear of reprisals; for all I know, she and her son live down the street from me.

Similar scenes are now unfolding at airports across the country. Like the train stations in Vichy France, our airports have become stages for the playing out of the flesh and blood consequences of our government’s policies. It is here that the historical comparison counts, if only by calling on our moral attention. It prevents us from going about our business, from pretending that orders handed down from President Trump are any more disembodied than the decrees handed down by Marshal Pétain. Yes, 75 years of history, culture, and circumstances separate us from Vichy France, but the inhumanity of our government’s laws, the insularity of its leader and insidiousness of his worldview are all too constant. 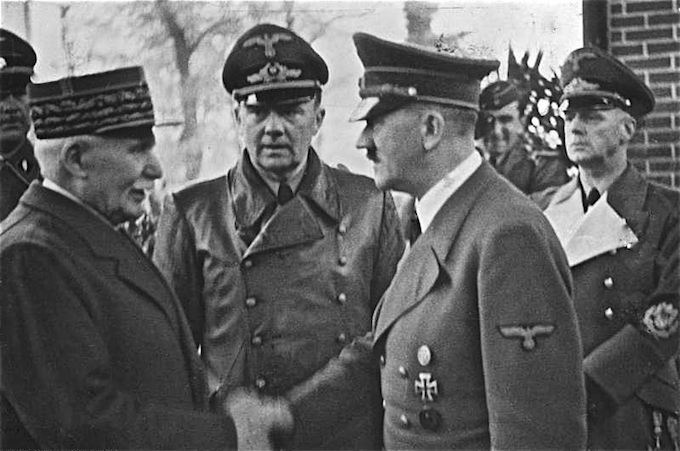