Given all Trump says that is either flat out wrong and/or offensive, it is easy to overlook when he sounds sensible. Trump’s remarks about urban homelessness in a July interview with Tucker Carlson offer a good case in point. After the interview, there was a flurry of news reports about all his “puzzling” declarations. Much more remarkable is what Trump got right. Being homeless is, as he put it, like “living in hell.” The same might be said of the life experiences that usually precede and propel the loss of housing. What creates this hell is poverty, discrimination, and systemic injustice. About this, the president — as well as a significant proportion of the American population — seems largely unaware.

Trump told Carlson that some of the people on the street have “mental problems.” According to the Mental Illness Policy Organization, this is true: “mental illness is a major contributor to homelessness.” But mental illness is not necessarily the cause of homelessness. In New York City, for instance, the vast majority of homeless people reside in shelters, not the street, and the largest percentage of this population consists of families who lack affordable housing. Moreover, as the sociologists Jason Wasserman and Jeffrey Clair note in their book At Home on the Street, “the homeless condition is a stressful and depressing one”; it “can, in fact, trigger mental illness,” not the other way around.

In the book I edited, Sacred Shelter, a collection of first-person life stories by formerly homeless people, Akira’s history offers a good case study. After bankruptcy cost him his home, family, and job, Akira had severe depression for the first time in his life. “I had no friends, no family, no money. It looked like I was dead. Some days I thought maybe that would be better. I felt I was not worthy to live anymore.” In another story, Lisa became homeless when her landlord, after illegally searching her apartment and discovering her bipolar medication, evicted her, shouting: “I don’t want anybody crazy living in my house.” Lisa did not become homeless because of mental illness. She became homeless because of discrimination against the mentally ill.

Trump told Carlson that the “phenomenon” of street homelessness started “about two years ago.” In fact, the rise of modern homelessness began in the mid-1970s when, for the first time since the Great Depression, the number of unhoused people across America began skyrocketing. The source and persistence of this catastrophe can be simply summarized: affordable housing has decreased and poverty levels have escalated. The people most vulnerable to becoming homeless are poor, which puts people of color at particular risk. According to the Los Angeles Homeless Services Authority, for instance, “black people represented only 9% of the general population in Los Angeles County [in 2017] yet comprised 40% of the population experiencing homelessness.” A recent study in the academic journal Demography finds that throughout America, non-Hispanic black Baby Boomers are “three times as likely” as non-Hispanic white Baby Boomers “to have experienced homelessness at some point during their lives.”

Most of the narrators in Sacred Shelter are people of color who were born poor and into the Baby Boomer generation, and who came of age during New York City’s 1970s fiscal crisis. Their neighborhoods were devastated by crime, violence, looting, drug addiction, drug dealing, and white flight. Dennis, for example, recalls witnessing the notorious burning of the South Bronx. “I watched it disintegrate from a vibrant community… to where it looked just like those pictures of bombed-out Germany.” Nelson remembers the horror of his family’s Harlem apartment: “We were poor, very poor and lived in a run-down tenement… There were… holes in the walls… I had a rat visit me often.” As a young child, Heidi spent Christmas morning in a condemned building on the Lower East Side without heat and electricity. “My mother was in bed, and we all cuddled up with her under the blankets. There were no presents. There was nothing.”

Trump is right that being homeless is like living in hell. On the streets, homeless people are harassed by the police and struggle to meet their basic needs. When memoirist Rodney spent cold winter nights on the subway, “the cops would come… and bang their sticks on the side of a seat. ‘Wake up! Get up!’ Even though you were dead tired, you had to wake up and switch trains.” Moving into a shelter doesn’t often make things better, since many are inhumane, degrading and violent. Edna hated her first shelter. “There were too many drugs and people fighting.” In Heidi’s first shelter, “the cops were there two or three times a week.” “I had never,” Sophia says, “seen so much police presence in my life.”

Trump was also right in his final words to Carlson. “It’s not our country,” he said about the “disgrace” of massive homelessness. “It’s not what our country is all about.” Nor should be the inequities, injustices, and suffering that create this hell in the first place. 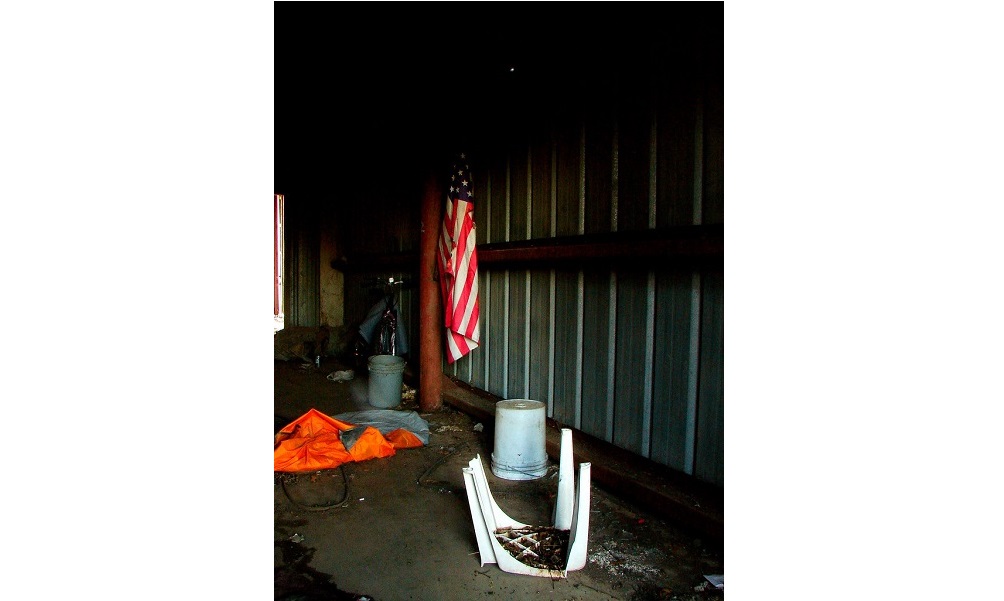