“You started this!” The shout came from a ruddy-faced woman in front of a heavy police barricade blocking hundreds of counter-protestors from a small group of gun-carrying alt-right fanatics who were looking increasingly marginal by the second.

When I learned an alt-right group called Patriot Movement AZ planned an armed march through Reid Park in Tucson, I knew I had to make sure my beloved adopted hometown wouldn’t be associated with racial prejudice. My goal was simple: block the view from the playground so park-goers wouldn’t be intimidated by a hate group with guns, in the same spirit of the “Angels” who blocked views of hateful anti-gay Westboro protectors with bedsheets and PVC pipe. Though I am barely 4’11”, and my outfits lean toward dresses and high heels, I wasn’t scared of a mob scene.

But my vision soon expanded. This had to be about more than protecting children in the playground or protesting hate speech — it was about changing the divisive way we protest. Because even though punching Nazis sounds satisfying, and marching through a playground with semi-automatic weapons gives PMAZ thrills, the spectacle is not going to change anyone’s mind and might provoke violence. Are you going to change the mind of the kid who’s being groomed by this group if you punch their leader in the face? You won’t. We should be trying to reach him, not disgust him. This is my goal.

Over Facebook, I asked their members: “who are you trying to reach? What is your goal in doing this?”

“IT’S OUR CONSTITUTIONAL RIGHT! WHY DO YOU HATE THE CONSTITUTION,” they would all-caps shout from their keyboards. No luck there. Maybe it would be different in person.

I’d never organized events before this, so I made phone calls to friends I thought would be sympathetic, left a bunch of voicemails, learned everything I could in a short amount of time about permits and park reservations. At my first event, eight people came. I was delighted. My group was small but dedicated, and even though I had no idea what I was doing, we got noticed.

Even though we had very few people, we still made the news, and so did Patriot Movement AZ. Images of them literally marching on a playground armed and carrying Trump flags enraged the people of Tucson into action.

When Patriot Movement AZ came back two weeks later, they got a bigger version of our welcome wagon. A group of 200 was waiting for them. This diverse group included clowns, performers on stilts, black-clad anarchists, a literal marching band, mariachis, and several independent protesters.

It was the coolest thing I’d ever helped do; it was also a huge time-suck. I spent the two weeks between events blowing up the phones at the parks department, special events office, and the city manager. I had to obtain special events permits and liability insurance. Then, I moved on to vendors. I wanted this event to represent the real Tucson. I wanted to have representatives from our quirky businesses and nonprofits; I wanted a voter registration table. So I made more phone calls to local businesses and outreach programs, grateful that cell phone services no longer had monthly limits on talk time.

Patriot Movement AZ trolled me hard the entire time. Every time I logged into my social media accounts, I knew it meant wading through a huge pile of notifications, all pretty much saying the same thing: “YOU STUPID LIBTARD CUCK! ARE YOU TRIGGERED?” This didn’t scare me, but I recognized a more benign trap.

After engaging them several times, I realized they weren’t the people I needed to be talking to while I was planning this. Though I was tempted to yell back, I knew it would go nowhere. I merely saved screenshots of some of their more threatening comments (one of them literally told me to stay home or get shot), and forwarded them to police.

I started getting flack from some on the left as well. Some didn’t like my cooperation with the police, some didn’t like my pleas for non-violence, and some didn’t think I was the right person to lead because I wasn’t a minority/experienced/old enough/young enough. This was a hard pill to swallow. I tried many different ways of explaining my views; I even adjusted the location of a separate event I was holding after a critic explained to me how it could be harmful. Some people were satisfied, and some people, I realized, never would be. Between the right and left, the insults where almost overwhelming. Some of them were completely absurd: “She’s had 14 abortions!”

At some point, I realized these insults and criticisms didn’t bother me. I tried to learn from the serious critiques, but when it came to being called a baby killer or a slut, I learned to let it roll off. After all, I’ve been getting slut-shamed from a very young age, before I could even understand the word. All these insults are designed to control me, to knock me back down into my “rightful” place. But they were suddenly just words. It felt like a new superpower.

By the time the second protest arrived, numerous groups were involved. One thing I’ve learned about protests, is they start with a spark, and they usually have a few key players, but they’re also amalgams. They’re difficult to unify in a singular purpose. Many of these groups, Veterans for Peace, Tucson Anarchists, and Cirque Roots came and participated, and I happily thanked them for coming and handed out bottled water, but ultimately, discussion with some of these groups can be just as difficult as it is with the white nationalists on the other side of the police barricade. Still, I viewed the event as a monumental success. Patriot Movement AZ was handily outnumbered at three to one, and needed a wall of police officers to surround them. The playground never saw a single one of them.

I went home and immediately made a Facebook page for our new movement: Arizona Progress Initiative. Through this group, I could include more than just myself in the planning of new events and ideas. Since then, we organized a third event when Patriot Movement AZ decided to hold yet another rally in Reid Park. Once again we drew a large response, and PMAZ was forced by the parks department to hold their rally in a gated garden where no one could see them.

During the runup to this event we suffered a huge loss when one of our event organizers died suddenly of a seizure. His name was Ben Clark. In one of his final acts, he arranged to have legal observers at the park. As a direct result of their presence, one of the founding members of Patriot Movement AZ was arrested for assault. The other founding members had an embarrassing meltdown over a Facebook Live feed. They likely will not return to Tucson. Ben’s actions successfully banished the alt-right from our town.

The United States of America was founded when people stood up to tyranny, and it is the duty of every American to do the same. But how we fight is just as important. Tactics like violence and intimidation only strengthen the divisive climate. If we want to change this, if we want to bring people together, we have to change minds, and we have to employ tactics that can do that in the tradition of Martin Luther King Jr., Gandhi, and Susan B. Anthony who promoted justice with nonviolence. We too can use positivity, kindness, inclusiveness, and empathy to demonstrate true American values. We can start conversations. We can find common ground.

At every turn, someone will say, “You can’t reason with these people; they’re Nazis/police/racists/rich/bigots,” and if one accepts that, then it becomes the truth. But it doesn’t need to be. At this final event, we displayed a shrine to our departed friend, so that he would still have a symbolic presence at the protest. A few “patriots” cursed him and us, but one of their number came up to me to offer condolences for the loss of Ben, and to see how I was doing. I almost cried; it was so unexpected.

Patriot Movement AZ is just an idea, and it’s a terrible one, but the people behind it are ultimately still people who can be reached. 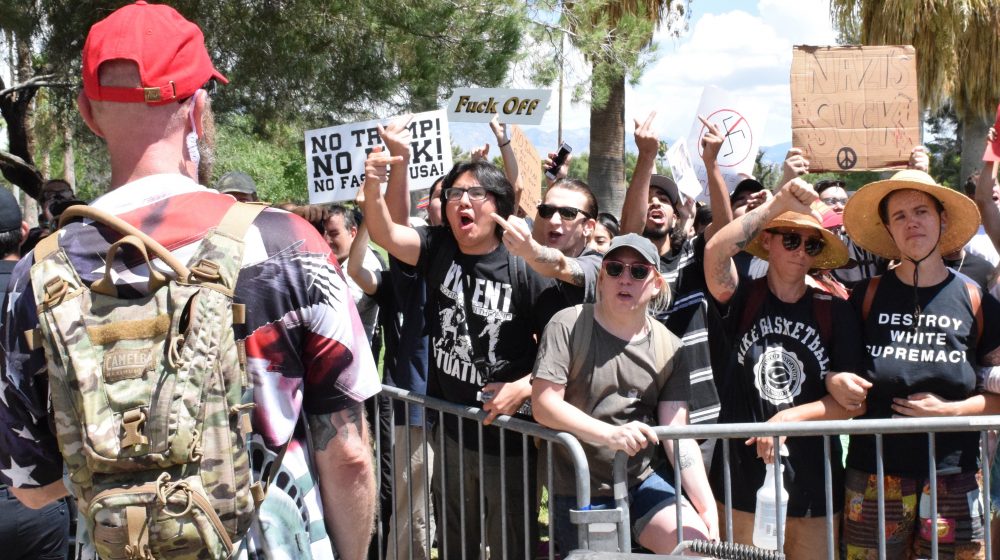