Trump won on November 8th. Then came our shock, our shame at getting this country so wrong, grief and despair. A few days later Leonard Cohen died. “You Want it Darker.” My wife, a cheerful person buoyed by hope, fought back. She saw web scuttlebutt on a Million Woman’s March and before it had a permit or a place or speakers, she booked her brother’s sofa in DC. Just another internet fantasy, but her own. Then she asked my opinion, knowing I’d boost her. Forty years on, we’re getting darker together.

The March was women’s work. I wasn’t invited. But as I age I’m ever more seduced by the buzz-saw thrill of free-floating anxiety. It’s more and more tempting to find the solace in playing victim, to gorge on the comfort food of impotent rage. I was staring at four bitter years as a grouchy geezer. I took the easy out: I’d piggy-back on her activism. I knew she wouldn’t say no, and she didn’t, but her yes said she wasn’t looking to partner up. Our life was a dance of consensus, but this was her personal act of defiance. So I was a fellow traveler, along for the ride.

Flights were already expensive and overbooked. She put us on the red-eye Inauguration eve and we changed in Chicago at 5 a.m. our time. Packed plane. All women, except myself and two muted men in neckties. Female energy filled the flight. Brief exchanges. Shared smiles. Expectant silence. Pregnant.

The subway from National Airport filled with fresh-faced frat folks, the lone black guy cheerfully chatting on white-voiced about binge drinking neck deep in a swimming pool. I made them for Marchers, but the hats in their pockets weren’t pink. Trump red. They debarked at L’Enfant Plaza for their celebration on the Mall, immediately replaced by a mob of pink hats.

Leni’s brother John is a stoic Washington lobbyist who’s been fighting nuclear manspread since Jimmy Carter. His wife Amy used to run Americans for Democratic Action. We sat tomb-faced on their couch while Trump described Factory Graveyards and American Carnage. They’d spent their working lives fighting for a stronger America, and now our new President was taking the torch. Would he burn it down? Amy was suitably outraged, but John was patient, judicious. What, precisely, had changed? Tomorrow he was hosting a reunion for colleagues who’d worked against Ronald Reagan’s MX missiles. The Silobusters.

March day. AccuWeather calls for chilly but not freezing. We debate the pros and cons of long underwear: for marching, an itchy annoyance; for just standing around, perhaps essential. We go bare. John reports on yesterday’s so-called anarchists who’d linked arms at Mall entrances to choke off the inauguration. Just enough violence for concern. Expect provocateurs. Don’t get in conversations that give away too much about yourself. Amy, veteran of many demonstrations, says she’ll carry only a driver’s license and a five-dollar bill. Ink a contact number on your arm. Leni and I cram into the Red Line down to Judiciary Square, then stream across the Mall toward the speakers rostrum. Speeches first, then March at 1:15. We aren’t Mall certified, so the crowd is compressed into Independence Avenue at 4th Street, before a small plaza at the Department of Education. Appropriate, impossible. It has already backfilled onto the Mall anyhow. We squirrel toward the Jumbotron. People are patient and cheerful. Pink hats peppered with rueful signs: “White lies matter,” “Why don’t you leave us for a younger prettier country?” The signs, like emails, sound angrier than the smiling faces they belong to. They’re saying we’re in this together. Protesting in advance, the message is hope. Stuck, we retreat to the Mall. Someone says there’s a second screen on 7th Street. We worm close to the toilets into sight of it. I’m average height, I claim 5’10”, so I’m used to being blindered by necks and heads, but among all the women I stand tall. The speaker’s words are swallowed by the crowd, but I don’t need to hear what they’re saying. I could write it. Crushed together, I watch a distant Gloria Steinem peer through tinted aviator glasses with elegant disdain. Michael Moore throttles the podium and glares, Ashley Judd fists the air and shakes her defiant butt. What I hear is the African American woman on a tree root behind me. She has seven daughters. She works in that Education building. Her boss is worried, and so is she. The daughter with her works for the CIA. Her boss is worried too. We all chime in cheering for the words we can’t hear. Crushed between lines for toilets and the speakers crowd, we retreat again. No march yet, we enjoy our neighbors. But working back to the Mall is tight and tough. The crowd is pressing toward the speakers, trying to hear, and it’s sliced by chains of folks with hands linked slipping sideways for a better angle. No order, no rhythm, packed tight. Two angry people, one shoving match and with all the force vectors anything can happen.

Leni doesn’t like crowds, and she certainly doesn’t want me bulling us through this. I wouldn’t be the first angry man, but if I meet the wrong guy I might be the second. She takes my hand and pushes off. She has a good feel for when to slip forward and when to bide her time. Slip and stop. Compression that should trigger tension and defensive hostility becomes an excuse for being friendly. Everyone wants to show that Trump can’t stop the world from being a nice place. She slides through a particularly tight spot, I fight to keep up and apologize to the people wall, “So sorry, so sorry, I’m losing my wife.” Gray haired lady: “I’ll take him!”

Half a dozen willowy-voiced women who weren’t born when it was written sing “Lean on Me,” and their neighbors know scraps of the chorus. I tear up. I’m pressed face to face with a hairy-moled cheek of a lady born in the late 60s. “Were you at Woodstock?” “Yes,” I say, “it was just like this.”

Nobody sang “Lean on Me” at Woodstock, but I wasn’t exactly lying. At the time I was begging quarters on the streets of New York, crashing on the floor of an Italian artist’s walk-up in the trash-strewn alphabet avenues of the decaying East Village. I’d read Abbie Hoffman’s Revolution for the Hell of It, and wanted to connect.

Alberto was a sweet cheerful gentle chap with droopy mustachios and a failing Afro. His art consisted of eggs carefully nested on a layer of sand in the womb of a terrarium. He survived by working leather, and he made me a fringe vest that I’ve never worn but still cherish. His wife would feed me. It’s a measure of the times that I don’t remember what else she did. She was eight months pregnant. I can’t recall anything I gave them besides my sterling company. I was comradely and committed, and made them laugh. Their hippie cocker spaniel. I was also a Harvard grad in Middle Eastern history who’d dropped out of architecture school to belong to the moment. Trying hard not to be Marie Antoinette playing shepherdess at my Petit Trianon on Avenue B.

Albert drove the three of us to Woodstock in his clunker. The roads were congealed so we parked by the turnpike and walked beside dead traffic with our bed rolls. We walked miles. We cut in from the highway and over muddy hills and finally found a clump of tents. We were welcomed with the same warm open trust of the Women’s March. We all belonged. We shared their plastic sheeting, shared their dope. It rained until it stopped, then we shared food around a campstove. We crashed. The next morning Alberto’s wife wasn’t feeling well, so we walked back. That was my Woodstock. Alberto’s heavy wife trudging miles through the rain. Wikipedia tells me there were two births at Woodstock, and four miscarriages.

I was a phony hippy and I never made it to the music, but I was at Woodstock.

I traipsed through the mud in a dense universe of young folks doing a damn good job of proving to themselves that the world was a nice place after all. We owned the moment. We owned the future. Who were these organizers anyhow? Thousands of us were tracking the route in parallel along Jefferson Drive on the Mall. Could 10 of us name a single organizer? Who organized Woodstock? Leni had come to take action, be heard. We keep moving west until we hit 14th Street, which would have been the march route, and then march north past the Washington Monument toward the Ellipse, shouting “This is what democracy looks like!” We’re supposed to stop there before the White House, but marching feels too good to stop and we pass the barricades, on up 15th into the city. Infinitely more varied than the Woodstock crowd, but united in the same way. Soon after my night on Max Yasgur’s farm I landed my first real job, maybe ever, sweeping floors for the cutting rooms at Wadleigh-Maurice Productions: Woodstock. I promoted myself to projecting their dailies while they checked sync, sometimes seven cameras tied together for a single act. Four hundred thousand feet of it. I saw the music from the seven best seats, all of it. The finest piece of film, Michael Wadleigh’s masterpiece, was his continuous 10-minute portrait of Meat Loaf ‘s band. He’d have me run it for him when things were tough, to cheer himself up. But Meat Loaf wasn’t big enough to make the movie.

When I went to Woodstock, few women went to law school or business school or medical school. Leni’s lawyer dad wanted her to use her quick mind and pleasure in people as a lawyer, but she’s spent her life helping run the LA Philharmonic. And I am, as they say, freelance. I write. Many of her women friends in arts management have husbands like myself, chasing arts of one sort or another from the other end. Role reversal, if you will: I thought my wife would be a poet while I helmed some creative enterprise, but I’ve been a professional spouse since Carlo Maria Giulini led the band, chatting traffic and children with trustees at three dozen Galas. Practice has made me pretty damn good. A difficult spouse can torpedo an executive. As they say over there, Leni is so lucky to be married to me.

Over 40 years, if you love each other you figure out what works. Our life is a dance of consensus, but yes, I do adopt the male prerogative. Leni feeds me and I do the dishes. When we eat out, I’m annoyed when she doesn’t let me handle the waiter. I lead on hikes. It was that way when her job was volunteering at KPFK and I called myself a film producer, and it hasn’t changed.

But the March was Leni’s. Now that I had to, I was amazed how easy it was for me to just let her do whatever the hell she wanted. How comfortable. Leni being Leni, warm and generous, I’d given up nothing but the bluster of bossing. We’ve always trusted each other, of course, but I saw that she trusted me more now. As Leni relaxed into it, she pepped up, and I saw how much energy she’d spent letting me play at pulling the cart. I might have seen this decades ago, but I did not. What a waste.

But there’s always tomorrow. “Welcome to the first day! We won’t go away!” 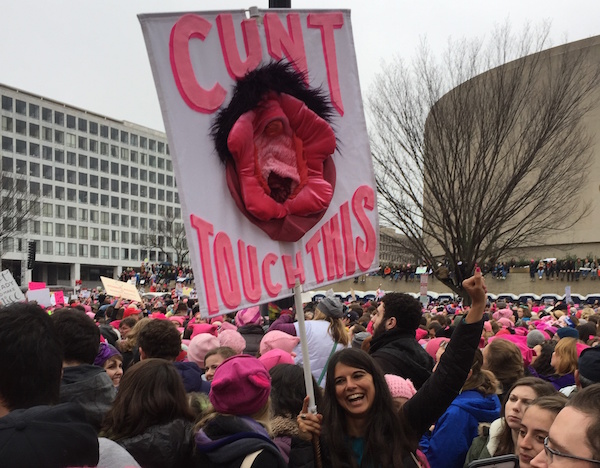