New York writers: They get it all wrong. That’s what we learned, anyway, growing up in La Jolla in the decades after Tom Wolfe published The Pump House Gang.

More than 50 years have passed since Wolfe reported the piece, but La Jollans have never stopped litigating the matter. The local paper rehashed the details just last month in a story about the notorious beach clique Wolfe had tried to profile, the Mac Meda Destruction Company.

The subject is addressed in a section titled “Crying Tom Wolfe.” Wolfe came to La Jolla in the summer of 1965, not long after the publication of his first book, The Kandy-Kolored Tangerine-Flake Streamline Baby, in search of feral beach characters he’d heard about through another writer. He first approached members of Mac Meda in the parking lot above Windansea, La Jolla’s storied surf spot, but they turned him away. So he spent a few days interviewing the kids who hung out at La Jolla Water System Pump House 21, a sewage pump station down the street.

The piece Wolfe produced, “The New Life Out There,” ran in two parts in the Sunday magazine section of the New York World Journal Tribune in 1966. It chronicled a group of surfers supposedly known as the Pump House Gang, an underground society whose members punched holes in walls at parties to see how big they could make them; painted red curbs white when they needed parking; and, when the riots broke out in Watts, drove 110 miles north to watch and laugh and make a tape recording called “Random Sounds from the Watts Riots.” Together they typified Southern California’s new Dionysian “era of age segregation,” Wolfe wrote, in which hordes of beach kids rode a magical post-war economy in pursuit of something called “the surfing life.”

The essay captured the imagination of Wolfe’s East Coast audience; renamed “The Pump House Gang,” it became the title piece of Wolfe’s 1968 collection. But if the intelligentsia celebrated Wolfe for explaining California to the rest of the country, his subjects in La Jolla did not. Wolfe had taken liberties; lots of them, depending on whom you ask. He exaggerated things to bolster his thesis, locals said, claiming teenagers slept in rented garages when they didn’t. He made up slang, like “panthus,” a term he said kids used for tourists who wore black socks and sandals, a reference to the Black Panthers. He described a toga party no one remembered.

Ending his piece with a description of a murder-suicide that went down near the pump house, Wolfe suggested that Leonard Anderson, 18, shot himself and his girlfriend, Donna Blanchard, 21, because of a dooming sense that they were aging out of the beach life. “Nobody knew what to think,” Wolfe wrote. “But one thing it seemed like — well, it seemed like Donna and Leonard thought they had lived The Life as far as it would go and now it was running out.” But that wasn’t it, locals said. Dirty Leonard, as Anderson was known, had been drafted into the Army and came back a changed man. He shot Donna soon after. “Something happened to him in the Army that really tweaked him,” one local recalled.

Most egregious, Wolfe conflated two distinct groups. The Mac Meda Destruction Company was a band of surfers who hung out in the parking lot above Windansea. The name started as a joke years earlier, when two locals, Jack “Mac” Macpherson and Bob “Meda” Rakestraw, made a pastime out of driving east to Sorrento Valley, where the I-5 was then being built, and wrecking old houses that were marked for demolition. “We’d drop-kick the chimneys off the house and we’d use the water heater as a batter ram to go through two-by studs,” Macpherson once told the local paper. The “company” had a mushroom cloud logo, which they printed on bumper stickers and T-shirts, and business cards that read: “If you need to destroy, then us please employ.” It also had a fake president: Albert, a gorilla at the San Diego Zoo whom they got listed in the phone book as Albert Mac Meda. “The police always wanted to find Albert,” one member remembered.

Then as now, the pump house, a roughly 15-foot-square concrete cube on Neptune Place, was a different scene. It’s a degree removed from the surf break, for one thing. And it tends to attract a younger crowd, in part because the street-level structure conceals the patch of beach below, allowing teenagers to drink or smoke out of view from passing police. Sure some of the pump house kids surfed, the way people in Montauk “surf” and a lot of other people “surf.” But there was a difference between that and the skill of the serious Windansea guys, who were, in the words of Steve Pezman, the former publisher of Surfer and current publisher of the Surfer’s Journal, “the heaviest surf crew ever.”

“They had world-famous surfers up there and did all sorts of wild things,” one of the pump house kids, Lindy Brower, told San Diego Magazine decades later, in an article titled “Forgiving Tom Wolfe.” “You had to graduate to the parking lot.” One of the other kids, Jackie Haddad, broke it down: “The pump house kids and the parking lot guys were definitely two separate groups, in age and interests,” she said. “Some kids may have ‘aspired’ to graduate to the Lot, but there was a gap between us that involved more than geography. Perhaps to Tom it didn’t seem that different, and may it really wasn’t. But at the time, at least to me, the Lot was another world entirely, and completely off limits.”

Or perhaps Wolfe recognized that Mac Meda was the better story and so grafted that group, whose members wouldn’t talk to him, onto a crowd that would. In any case, by combining the two, Wolfe cemented his reputation — in La Jolla, at least — as a grave misreader of social space, oblivious to the intricacies of that particular “statusphere.” Before he died in 2006, Macpherson, one of the two founders of Mac Meda, would often comment that it was fitting Wolfe named his anthology after a sewage pump, because, as he put it to San Diego Magazine: “The book was a bunch of bullshit.” The ultimate indictment was scrawled across the pump house itself, a couple of years after the collection was published: “Tom Wolfe is a dork!”

Over time, Wolfe’s reportage was folded into the lore of the place. The anti-Malibu, Windansea occupied a certain spot in surf culture for its formidable localism and iconoclastic surfers, which by then included Mike Hynson, who starred in The Endless Summer. The Pump House Gang amplified that reputation, maybe even fed it. It’s conceivable that Mac Meda T-shirts would not have been sought after throughout the ‘70s and ‘80s and ‘90s and even now had Wolfe not immortalized the group. Of course, rejecting Wolfe’s portrayal became part of the lore, too. It’s not for nothing that a local who wanted to register dissatisfaction with William Finnegan’s Barbarian Days did so by spray-painting on the pump house: “Finnegan is a KOOK.”

To read The Pump House Gang now, as I did over the weekend, is to notice how much more pronounced the distance between New York and a place like La Jolla once was; if Los Angeles felt remote to Wolfe, La Jolla must have seemed like Australia. The culture shock went both ways. Wolfe had by then adopted his “man from Mars” sartorial approach to reporting, turning out in three-piece suits on the premise that, if you don’t blend in, people would be more inclined to explain themselves to you. Hilariously, in La Jolla, most people thought he was a narc. “I thought he was a funky, greasyhaired detective or a pervert,” one local remembered later. “All of a sudden this scrawny guy comes down the street in a funky, black suit and flat black shoes. We thought everybody that wore flat black shoes was a cop.”

That safe distance may have emboldened Wolfe to take the liberties he took. And yet, to read his essay now is also to acknowledge that Wolfe wasn’t altogether off. In fact, the man from Mars clocked a striking amount of nuance. He saw the contempt for tourists, who “come from Tucson or Albuquerque or one of those hincty adobe towns,” with their “cars all full of thermos bottles and mayonnaisey sandwiches.” He understood the orientation to Hawaii; a trip to Hawaii, he wrote, was “the surfer’s version of a trip to Europe.” He logged the significance of Bob Simmons, the eccentric waterman who revolutionized surfboard design before dying one stormy day at Windansea in 1954, and for whom a nearby reef is named. “He was plugged into the whole pattern, he could feel the whole Oh Mighty Hulking Sea, he didn’t have to think it out step by step,” Wolfe wrote. “But he got wiped out and killed.”

Wolfe captured, in two sentences, the particular way that surfing would be marketed and monetized through movies and clothing for decades to come:

Above all, Wolfe recognized — as only a Depression-era Southerner could, perhaps — that it was an undercurrent of easy-breezy post-war affluence, the dumb luck of profound privilege, that afforded La Jolla’s beach kids their buoyancy. “They have this life all of their own,” he observed in a passage that describes generations of Windansea cliques. “It’s like a glass-bottom boat, and it floats over the ‘real’ world, or the square world or whatever one wants to call it. They are not exactly off in a world of their own, they are and they aren’t. What it is, they float right through the real world, but it can’t touch them.” They were, Wolfe wrote, “Immune! If one is in the Pump House Gang and really keyed in to this whole thing, it’s — well, one is…immune.”

And even as he spotted the magical economy keeping the whole thing afloat, even as he saw how surfing was being converted into so many saleable nylon trunks and flip-flops and Beach Boys songs, Wolfe somehow also picked up on the essential tension between “the surfing life” and that other Mighty Hulking Sea — capitalism — which was just as incomprehensible, ruthless and, he sensed correctly, encroaching. Recalling all the nights Bruce Brown slept out on the beach and woke up to some guy or another claiming the beach was his own private property, Wolfe knew to write that Brown would “prop his head up and out there would be the Pacific Ocean, a kind of shadowy magenta-mauve, and one thing, that was nobody’s private property —”

All this to say: If you squint and pretend The Pump House Gang is fiction, Wolfe got it exactly right. 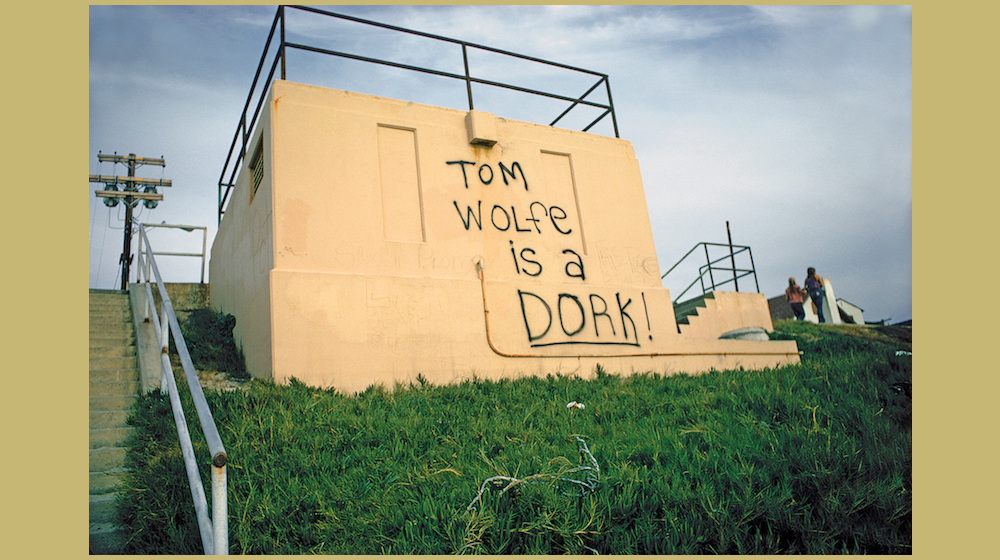