With two minutes remaining on the game clock in the surprisingly hard-fought Super Bowl LII, the Philadelphia Eagles — underdogs by five points according to the Vegas spread — were behind by one point. A touchdown and extra point would place them 6 points ahead. On 3rd down and 7, with the ball on the Patriot’s 12 yard-line, Philly quarterback Nick Foles completed a short pass to tight-end Zack Ertz, who ran it into the end-zone. Or did he?

As Ertz crossed into the plane of the end-zone, he hit the ground. As he was turning over, the football came loose from his hands. For a second, the ball was airborne above his body and, just as quickly, he grabbed it and pulled it back toward his chest, securing its possession as he came to a rest. Touchdown!

Of course the play would be reviewed. In 2016, out of some 40,000 plays, league-wide, 345 were reviewed. For TV audiences, the review means an endless loop of the play in question, with multiple camera angles provided while commentators dive into the hermeneutics of NFL rules and regulations, themselves a series of shifting codifications and contradictory interpretations. Did the ball cross the goal-line? Was the receiver in control of the ball? Were both feet in bounds as the receiver took and maintained control of the ball? These are questions one hears during most reviews. The commentators know the rules, of course, and are usually eager to dissect them, which dissection then becomes the sport on view.

Sunday’s Superbowl’s climatic ruling concerned what the Bleacher Report calls, “the worst rule in sports,” the NFL’s “catch rule:” Here one has to define at what point a receiver maintains his position as receiver and at what point he has become a runner, running with the ball. This question’s answer mattered in the Super Bowl because, as the ball momentarily floated above Ertz, it may have invalidated the touchdown. If he were a receiver, that is. But if he were a runner, then all that mattered was that he cleared the plane of the goal line with the ball.

How could the receiver not have been a runner? He got the ball and ran. At the same time, how could someone who received the ball not be a receiver? But football rules have their own hermeneutics, without a corpus of jurisprudence for guidance and consistency. As Socrates argues in the Phaedrus “you must learn how to define each thing in itself and, having defined it, you must divide it into kinds until you reach something indivisible.” The NFL fails at this Socratic imperative time and time again. But by failing at being Socratic, they do succeed in doing something else; they regularly produce micro-allegories of American liberal impossibility. In fact, the NFL’s hermeneutics of procedural unfolding give the sport its identity, as much its soaring passes and brutal hits.

What kind of a sport is this? We know about the concussions, the racist culture, the misogyny, and the politics of NFL owners, who overwhelmingly supported Trump. But what of the fetishization of rules — some of which might have been culled from Kafka’s The Castle or Pynchon’s The Crying of Lot 49 — how do viewers experience them? And why? Football dramatizes banal proceduralism like no other sport, with its obsessive time management and its series of obscure regulations always available to be introduced into the game’s diegesis. At the moment of maximum intensity in an NFL game, you can almost be guaranteed that the least dramatic, most procedural and legalistic of hermeneutics — when does one thing become another? — will take center stage. At the Super Bowl, the question became: was Ertz a runner running, or a receiver who had become a runner, or a receiver who was still a receiver and happened to be running?

Narrative time — what organizes any football game — quite literally stands still as the game clock is paused and a New York-based committee interprets the evidence; the league reports that the average replay lasts 2 minutes and 25 seconds. But time stands still often in football, as 60 minutes elapse over roughly 3.5 hours. Football is organized so that the most consequential plays are often reduced to their most inconsequential dimension; a touchdown hinges on the definition of a run vs. receive, with few if any participants understanding precisely the distinction — this according to the players themselves. The word is given from on high, from the NFL review committee. It’s a kind of police procedural without the police. Without the protagonists even: “a senior designated member of the officiating department will make the final review on the decision,” the league explains.

Compare this sport to, say, professional soccer, in which the game begins and runs mostly uninterrupted for 90 minutes; penalties and substitutions take the least amount of time possible; there is no official review. At the game’s end, all time lost, several minutes are usually added back to the game clock as overage. Fewer ads. Less time for commentary. No showcase for the interpretation of rules, within soccer’s temporal organization. One team wins by scoring goals, not by negotiating rules.

Sports contain within them the ideological marks of their historical moment. But what, precisely do NFL games offer? This season has brought news of both the NFL’s racism, and refusals of it, in the career of Colin Kaepernick. Each season has also brought more news about the effects of repeated head trauma to players’ bodies. We were already aware of the league’s violence and misogyny, and even its imbrication within the US Military state apparatus. Yet one of professional football’s most outstanding contributions to our liberal imagination is its ability to showcase organizational proceduralism as integral to sport.

What are people watching when they watch the NFL delve into its own rules, in secret, and then hand down rulings that can change the course of a game? The answer, of course, is the liberal imagination itself, the liberal imagination of American democracy in particular. Liberalism is a drama of procedure in which one rule might always be updated or reinterpreted in order to newly organize ever smaller sites of political power. The breadth and definition of the rule becomes a site of focus, as the rule’s very legitimacy fades from collective conversation and imagination.

Meanwhile the Socratic imperative to divide until something becomes indivisible goes awry when it trains its focus on the wrong object — as much a critique of Plato as of liberalism. Let’s think back to some of our more theatrical political moments: Hanging chads, remember those? The still-attached perforated paper that dangle off a paper ballot? They became one of the stars of the 2000 presidential election. How do we know a vote is a vote? If there’s an indentation? Partial perforation? ¾ Perforation? In impeachment news, questions that have required definition include whether oral sex is sex? Or is it a precursor to it? That matters if a president is to be tried by the congress for high crimes and misdemeanors.

I was at a conference in Europe two years ago talking with the late Mark Fisher. He was trying to understand how the voting worked in the democratic primaries. Would Bernie win, he was curious? It depends, of course. Voting districts, absentee ballots, voter identification laws, registration deadlines, party delegates, super delegates — these rules, not voting preference, inform the outcome. At our conversation’s end, his question — who will people vote for? — seemed utterly beside the point.

Now we have President Trump and an ongoing investigation into whether Russia interfered into the 2016 presidential election and, perhaps, whether Trump himself “obstructed justice” as he sought hide that fact. Trump has undoubtedly done some illegal things on his way to becoming real estate mogul and now politician. But certainly the real scandal is that most of them were perfectly legal, perhaps occupying that odd ontological space of “loophole.” Certain commentators — Glenn Greenwald comes to mind — have pointed out just how absurd the Democrats’ psychic investment in the Russia investigation has become. Last week The New York Times reported that Mueller has zeroed in on a meeting aboard Air Force One in which Trump, his son, and a spokeswoman crafted a response to a news story about a meeting with Russians in Trump Tower. The Times reports that “rather than acknowledge the meeting’s intended purpose — to obtain political dirt about Hillary Clinton from the Russian government — the statement instead described the meeting as being about an obscure Russian adoption policy.” Muller, the Times reports, has trained his focus on this instance because Trump himself was involved “in real time” and “without a lawyer present.”

This particular news story, in many senses, now operates as both political critique and possibility. It’s not just an example of liberalism getting the little things right and the big things wrong — it is that, too — but of the inability of public discourse to represent or respond to a structural problem. Here, NFL games provide a wonderful staging ground of procedural narrative and imagination: those who best interrupt little-understood rules win.

I’m not sure we’re able to locate here the utopian, Frankfurt-school like sports reporting that Dave Zirin regularly provides in The Nation, in which individual teams and players become sites of resistance against an all-powerful National Football League. Rather we seem more in an Althusserian moment of structural critique in which ideology “represents the imaginary relationship of individuals to their real conditions of existence.” The NFL represents and materializes the impossibility of democracy itself. Go team! 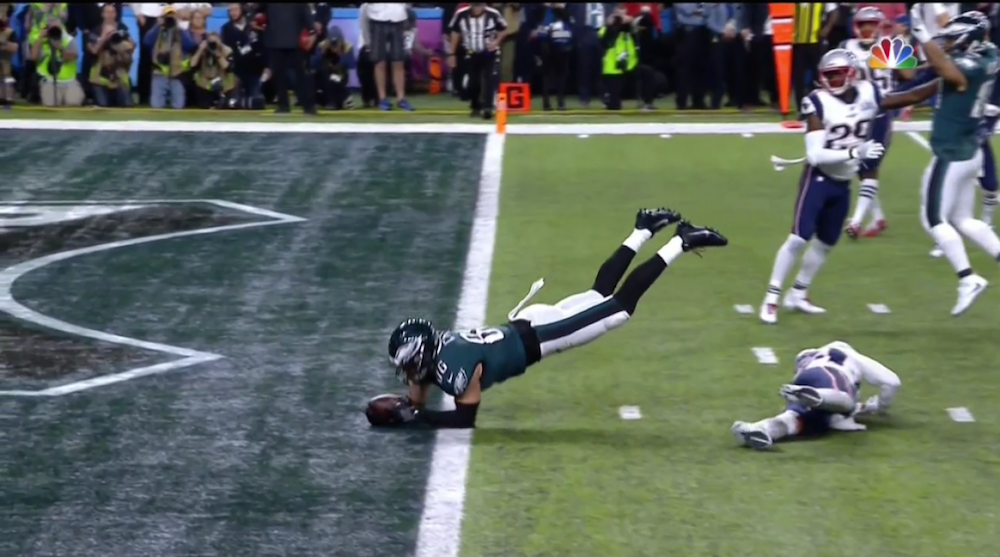