Grieving is such a strange arena of blind chance. “Being lost at sea” is a good metaphor — you think you are going one way, but the water takes you toward a different destination.

During last year’s storied summer, up near where the Appalachian trail drops off one thousand feet in New Jersey, before calmly crossing a field of cows into New York, I drove back alone to our vacation house after dropping my family by friends for the afternoon. I followed the windy road, in view of that declivity and the coffee-colored rock faces nestled in a green expanse, soon to be in New York for 30 seconds before re-entering New Jersey via an old road from covered wagon times, when the Spotify mix dialed up “I’m Not the Man I Used to Be” by the Fine Young Cannibals. With those first blue though beat-filled tones, I spontaneously began to cry.

The reasons are indirect but common-sensical enough. My father, who died a year before, had taken me to see Barry Levinson’s Tin Men in the summer of 1987. The Cannibals had three songs from their forthcoming best-selling album The Raw & the Cooked in that film, though not the somber tune that knocked the breath out of me. Over years of sporadically listening to the album, I shy away from the overheard hit “Good Thing,” but enjoy most of the others for their aural distance — I don’t want to ruin their good thing, so I monkishly keep listens to a minimum.

The summer of 1987 is a cornerstone in my life, beginning with my parent’s separation in June and ending just when I turned 13, with more belly fat to gird my start into hormonal eighth grade, and more fatherless than I could have imagined, though the man had only moved across the street to his mother’s house. A 12-year-old wants treats and spectacles — so during those hothouse months, aimless with no homework, he would take me to eat and then to movies I wanted to see (second-run for a dollar): Project X, Tin Men, Stakeout, and the long grown ignominious Adventures in Babysitting. I had seen it before with a friend and only dragged a nearly 50-year-old man to its badness for the selfish reason that I had some fledgling sexual attraction to Elizabeth Shue; her indolent yet inviting face and spritzed 80s hair, very like the pristine one of the girl I loved through seven grade school years (and kissed in our second) and who looked forward to the last only for the fact that she wouldn’t have to see me again after it. I enjoyed the naked thrill of hearing Shue say, “Don’t fuck with the babysitter,” in a PG film that the MPAA had eased up on.

Tin Men, the best and most adult (Full Metal Jacket would be in the fall), ended up leaving the most swirls in my brain pan with some delicious dirty-word phrasings, like “Hey, asshole! This is the ultimate ‘fuck you.’ I just poked your wife,” Richard Dreyfuss’s smarmy comedic inflections almost always spot-on. I’d forever hated the little pissant known as Danny Devito and rooted for Dreyfuss to eventually triumph and romance Devito’s wife (Barbara Hershey) who Dreyfuss pursues to get back at him for the car accident at the beginning. Revenge is the thrust of the film (and of most Western narrative art, according to Alexander Theroux), something understandable and even appealing to a 12-year-old boy who became hooked because of the TV trailers highlighting this impulse.

My father enjoyed it, too, and laughed about how these men get mad at each other and their scheming, something more a matter of honor for people of my father’s generation and before, but now incredibly awful, bloody, and almost sure to carry innocent victims in our time. I can only see now, being a few years shy of my father’s age then, another aspect to his viewing this; how he was on his way to getting divorced — the greatest failure of his life, he told me on his deathbed — something he couldn’t have talked to me about at the time even if he ached to. I wanted to be entertained, while he was meanwhile stewing at the lowest (and scariest) point of his existence. He was not an easy man (is any writer’s father, or parents?), but the combative and solitary side somehow caught up to him and the last 20 years of his life, beginning with the birth of his first grandchild, were undesignedly of much lighter spirit. Yes, my sister and I concurred, in the days after his death; how he did change and carried a quiet dignity, never blaming or complaining during his many hospitalizations, including one of nearly a half-year, three years before another spate of months culminated in death.

All I’ve recounted hit with metamorphic force in less than a second when driving the New Jersey road that would soon welcome me temporarily into New York with a glowering sign. I know long stretches of Tin Men‘s dialogue (even camera moves and cuts) by heart, as I know many other meaningless things, like baseball statistics from the 1980s and countless film and book trivia. Art takes us back to loved ones and even lets us live with them a little longer, which is probably one of the reasons why it is so vital. Tin Men is not 2001 but it is a gateway to my father; and the Fine Young Cannibals, long since disbanded, are not Bach, but they are closer to my soul in a magical way that even visions of the Star Child being reborn can’t touch — probably because it didn’t happen. Our family and friends are maybe the most important part of any work of art — they are both the ghosts that inhabit the characters, settings, and voice, and the people who shared the living space, who help us create who we are. 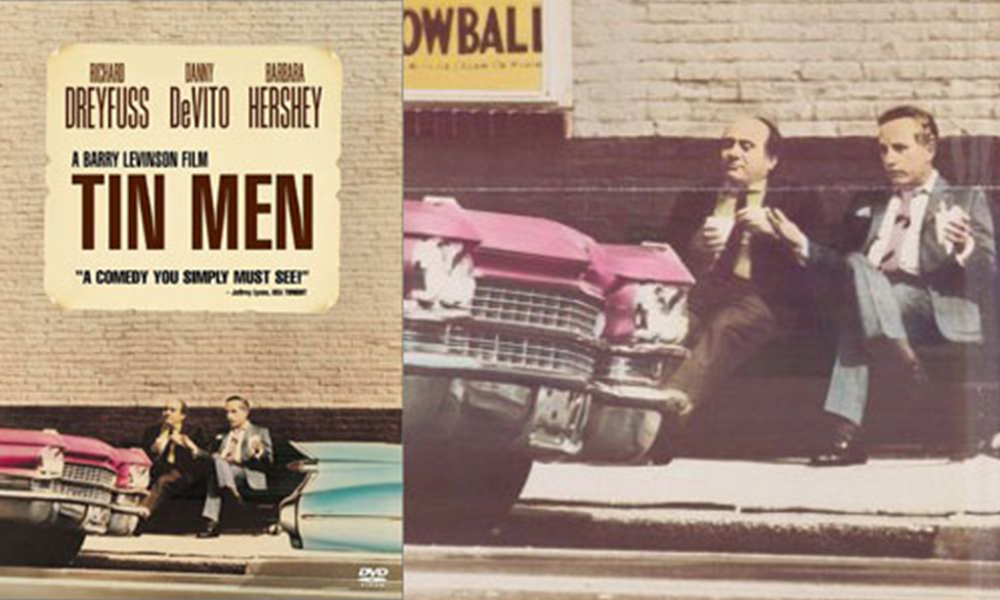