Earlier this month, indie darling Sufjan Stevens released two versions of “Tonya Harding,” an ode to the disgraced Olympic figure skater and recent subject of the Margot Robbie-starring I, Tonya. (The filmmakers reportedly passed on the song.)

Much has been made of Stevens’s recasting of the divisive Harding as a heroic underdog and American icon, but so far the two versions — which differ not only in key, but also in pace, orchestration, and emotional register — have largely been treated as one song. Below, Stevens fans Chris Stedman and Nathan Goldman debate the merits of each. Stedman has chosen D Major, Goldman Eb Major.

In Defense of D Major

Look, there really aren’t two versions of “Tonya Harding.” There’s one song — “Tonya Harding (In D Major)” — and an alternate take that follows it. Both are lovely, but only one of them is a fully-realized song worthy of its complicated subject.

It’s actually not all that fair to Eb Major to compare the two because D Major is perfect. This may sound like hyperbole, but it’s not. The song is that good. Released just a few weeks before the end of the year, D Major is a stirring last-minute bid for song of the year. Like the haunting “John Wayne Gacy, Jr.” before it, Stevens uses the song to humanize a notorious and oft-demonized public figure in the way only he can. It is lovingly honest and empathetic, turning a caricature into a queen. Last month, I had no opinion on Harding. Now, the tragedies and triumphs of her life are all I can think about.

The production of D Major is an inextricable part of why this song works so well. With assists from Helado Negro and Doveman, Stevens fashions an intricate web of piano, twinkling synths, and modulated drum machine beats. Throughout the song, both the tempo and Stevens’s layered, ethereal vocals are steady as a sea of oscillating synths and handclaps ebb and flow, the sound panning from left to right like Harding cutting across the ice. The beautifully busy production mirrors the chaos of Harding’s dynamic life, while Stevens’s voice and the percussion are stable forces guiding her on.

D Major builds into a gorgeous crescendo of intricate synths and wordless vocals before dropping out almost completely at the three and a half minute mark, leaving just a piano and Stevens’s hushed voice. The contrast between the swell of sound that precedes it and this quiet moment gives heft to Stevens’s words of consolation: “Tonya Harding, my friend / Well this world is a bitch, girl / Don’t end up in a ditch, girl / I’ll be watching you close to the end.” In this moment Harding is transformed from a villain or a star into a friend, someone you want to protect from a world that is so often cold and cruel.

If you still don’t believe me that this is the version of the song, watch how perfectly it is set to Harding’s 1991 U.S. National Championship program in the song’s official video. Frequently criticized as being overly mechanical — a robotic and technical skater who valued perfection over feeling — Harding and her routine are imbued with new emotion when set to D Major. The song also takes on an even greater weight with the visual; you can feel how much she wants to win, to prove her worth, and how much Stevens wants it for her, too. As she skates, Stevens is the compassionate voice of encouragement she didn’t seem to have in her husband or mother.

Harding has described herself as being surrounded by people who loved her because of how their proximity to her skill could benefit them, and in D Major’s cacophonous instrumentation you can almost feel them pulling at her as she tries to evade their exploitative grasps. Watching her twirl, spin, and victoriously raise her arms in the air in the video to D Major, it’s hard not to think that perhaps, if she’d had a champion like Stevens in her corner who loved her not in spite of but because of her humanness, things might have turned out differently. And it’s impossible to imagine her skating that program to anything else now.

The delicate Eb Major, on the other hand — while lovely in its sparseness — feels a bit underdeveloped, like Harding’s 1994 Winter Olympics routine, where she only attempted a single axel jump instead of the planned triple. The warm synth opening in Eb Major is a red herring, quickly giving way to a simple, waltzy piano ballad that sounds more like a demo than a finished product. On its own Eb Major is pretty and tender, but immediately following the emotional richness of D Major, it feels, well, flat.

Ultimately Eb Major is probably best enjoyed immediately following D Major (or, in my case, as a buffer between repeats), serving as a kind of extended outro for an emotionally wrenching and lavishly produced song that requires a less demanding cooldown.

In the early ‘90s you were either Team Harding or Team Kerrigan. Once again we’re being asked to pick a side, but this time the choice couldn’t be clearer: D Major, a song as complex, thorny, and convention-shattering as the rebel it reveres.

In Exultation of Eb Major

In a short essay released along with the two versions of “Harding,” Stevens describes Harding as “an unlikely skating star.” So it’s no surprise that, in the battle between the two songs chronicling the life of this underdog, the obvious victor is the B-side. But as with Harding herself, to see this clearly, you have to be willing to put aside some assumptions.

Like the “flamboyant outfits” that Stevens describes Harding as wearing — because, unlike her competitors, she “couldn’t afford Vera Wang” — Eb Major might seem unsophisticated on first listen. It’s understandable that Variety’s Chris Willman would describe it as “peppier” and “more palatable” than D Major and as “something you can imagine at, say, the end of a movie.” The pace is certainly accelerated — between the tempo change and the clipping of instrumental flourishes, it comes in at more than a minute under the runtime of D Major — and the arrangement is far more restrained. There’s also a seemingly naive brightness in Eb Major’s twinkling pianos that Stevens mirrors in his vocal performance. The austerity of the spare arrangement gives the song a kind of flatness, a feeling of safety or even coziness.

But just because Eb Major doesn’t wear its complexity on the surface doesn’t mean it isn’t there. Unlike an anesthetized Disney version of a once-grotesque fairy tale, the delicate simplicity of Eb Major stands in quiet tension with the lyrics’ straightforward retelling of Harding’s fraught life and career. It sounds like a lullaby compared to the languorous sprawl of D Major, but the nearly unchanged lyrics bring out a darkness that beautifully complicates Eb Major’s apparent plainness. When, in the second verse, Stevens sings, “Just some Portland white trash / You confronted your sorrow / Like there was no tomorrow / While the rest of the world only laughed,” pity mixes with admiration to create a devastating storm of emotion. In the last two lines, Stevens’s voice rushes ahead of the music, tripping over itself to deliver the first words of the final line over the last words of the preceding line. This move — which Stevens repeats in the third, 10th, and 11th verses — creates a wrenching sense of awkwardness fitting for his inscrutable star.

The song reaches its emotional apex in the desperate yearning of the melody Stevens sings in the first line of the fourth verse — “Are your laces untied?” — and repeats several more times, most devastatingly in the line, “Are you lonely at night?” Here the song achieves the most concentrated form of the melancholy that otherwise lurks beneath its surface.

Where D Major foregrounds the grandeur and desolation of Harding’s life, Eb Major more gracefully captures the lyrics’ mix of camp and gravity. The repetitive swirl of the piano melody recalls Harding herself spinning on the ice. But the arrangement’s simplicity and lightness don’t evoke Harding in the flesh so much as a snow-globe facsimile, skating in circles as swirls of faux-snow glitter to the tune of a tinny music box melody summoned by the turn of a key. This is appropriate for a song equally concerned with Harding the human being and Harding the icon. Stevens disrupts the looping verses only twice, with short, pleasantly feedback-filled interludes: just enough to briefly break the song’s charming spell and to gesture toward the darkness and despair of Harding’s tale that the song otherwise sublimates and holds at bay.

To the untrained ear, the songs’ final 20 seconds — in which Stevens repeats “You’re my shining American star” over a chord resolution that puts one in mind of a musical finale — close out the song on a note of cheesy triumph. But the attentive listener will hear the wry irony in Stevens’s voice as he bestows the title, as the song rises into the realm of self-parody. This is the magic that Eb Major offers: a subtle cynicism and charm laced with despair.

Every incredible B-side benefits from being paired with an excellent A-side. Eb Major is lucky to have D Major to grab listeners’ attention and to remind them of Stevens’s skills for maximalist production. And after the bombast of D Major has died down and the ringing has faded from your ears, Eb Major will be there to open your heart to the irreducible complexity of Tonya Harding. 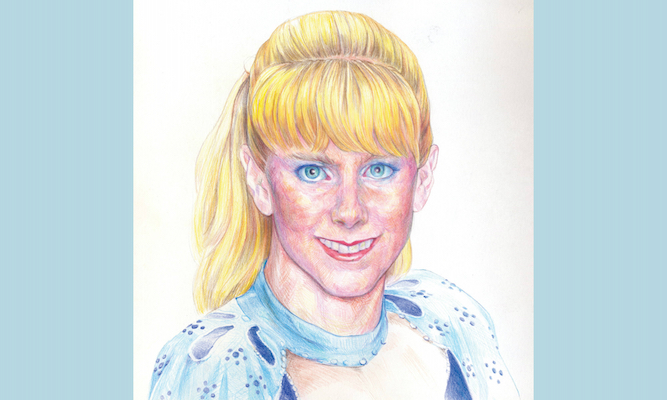