At the end of Tao Lin’s first nonfiction book, Trip, the author is happy and stoned in Northern California. The journalistic memoir documents Lin’s radical lifestyle change following the depression and pharmaceutical drug addiction fictionalized in his previous novel, Taipei. The journey began with Lin watching over 30 hours of plant-based drug guru Terence McKenna making “small mouth noises” (McKenna’s term for human speech) on YouTube. In these hours, Lin learned that McKenna was excited by topics Lin had expressed in Taipei as sources of despair — drugs, technology, humanity, and the future.

At his death in 2000, Terence McKenna was, in his daughter’s words, “still deciding who he would be.” In life, he was an ethnobotanist, mystic, psychonaut, lecturer, author, and psychedelic plant advocate. According to this New York Times obituary, he was deemed the “Timothy Leary of the 90’s” by Mr. Leary himself. He was also called the “intellectual voice of rave culture.” Lin was drawn to “McKenna’s triangulating deviations into stand-up comedy and, as [he] experienced it, ‘fiction;’” the Times described McKenna as combining “a leprechaun’s wit with a poet’s sensibility.” Lin relates to these descriptions. “I do try to be funny,” he tells me on the phone in his trademark monotone. “And I like dry humor.”

McKenna’s work helped Lin escape from what he calls “society-wide degeneration,” the effects of which include “pain, confusion, dark humor” and a “kind of restlessness.” He did this by empowering himself with knowledge. (Lin tells me he’s uniquely qualified to “recommend things,” which he does frequently on Twitter, because he’s read “more than 150 non-fiction books” and “hundreds of scientific papers.”) Trip explains that by “self-consciously, note-takingly exercising and stretching in a variety of physical and mental states in the past three years,” Lin learned his muscles had been “‘unconsciously tensed’ for some unknown amounts of time.” This is an inevitable symptom of being a “twenty-first-century degenerate.” Publicly-owned companies, Trip explains, corrupted aboriginal wisdom regarding nutrition. Before a DMT trip towards the middle of the book, Lin and a friend discuss a Canadian dentist who concluded that modern people can’t fit all 32 teeth into our mouths neatly due to multigenerational malnutrition. This finding comforts Lin, who had always felt that his teeth and tongue were too big for his mouth.

In Trip, Lin takes care to distinguish drugs from psychedelics. Drugs are “more-habit forming,” whereas psychedelics “dissolve habits.” Drugs don’t cause mystical experiences or “guarantee relief from boredom,” rather they stop “feeling amazing” after the first few times and typically cause a comedown, or “take from the future.” Psychedelics awaken compassion. Lin writes: “Peaking on large doses of Adderall alone in my room, I’ve never sobbed while thinking fondly and lovingly about my parents, as I have on cannabis and psilocybin.”

Psychedelics also helped Lin as a writer, as tells me on the phone, because they enabled him to access emotions he’d never before experienced, like awe and wonder. Faced with these feelings, Lin was required to invent “new arrangements of words” to describe what he was experiencing. It’s a ongoing test, he says, particularly because psychedelics underscore the limitations of language. (He enjoys the challenge.)

After recounting Terence McKenna’s life in chapters like “Mushrooms and Marriage” and “Books and Divorce,” Trip becomes more personal. Lin applies what McKenna taught him in four sections named for the following plant-based drugs: Psilocybin, DMT, Salvia, and Cannabis. On Psilocybin, Lin deletes his website and throws away his computer. On DMT, he experiences various degrees of paranoia and connection with his “internet friend Tracy,” who is visiting New York for a conference on psychedelics. During the trip, Lin becomes convinced Tracy is both a CIA agent and “a person who hated me.”

As evidenced in all of his books, Lin is skilled at documenting the unique discomforts of social interaction. I ask how he deals with the fact that plant-based drugs seem to magnify his discomfort, via things like inappropriate laughter and paranoia. Lin explains that while these drugs can intensify social anxiety, they only do so for brief moments, which he later finds amusing. In Trip’s epilogue, which he edited from first to third person in order to explore “Terence McKenna’s idea that the main thing people should realize is that we’re all imprisoned in some kind of work of art, ” Lin tells an inane lie to McKenna’s former wife Kathleen Harrison about turmeric while high on cannabis. He reflects:

[Lin] looked away and felt disappointed in himself and confused—he wouldn’t formulate a theory on why he’d suddenly lied until examining this situation later in prose—but then recovered almost instantly from the convoluted faux pas that now seemed okay and at least partially amusing. He reminded himself he lived in relative hermitude and that his brain and mind were broken in thousands to millions of ways, that his temporary malfunction wasn’t unexpected. It was expected and so could be meta-experienced and, in various ways, enjoyed.

On the phone, Lin tells me: “while I’m stoned I have access to more thoughts, so that can make social anxiety worse, but I’m also enjoying everything more and more interested in more things, and that takes me away from thoughts that give me anxiety.” He continues, “I’m more interested in the world. And that encourages me to talk more. And I can just enjoy it. And that reduces social anxiety.”

In a section entitled, “Why are Psychedelics Illegal?” Lin weaves the history of psychedelics and their criminality with his own personal experience serving on a federal grand jury. Here, Lin matter-of-factly pinpoints, without sensationalizing, the criminal justice system’s problematic underpinnings. At one point, Lin asks the prosecutor how the police “learned of the defendant,” afterwards thinking to himself, “Poor minorities seemed more likely to be targeted than, say, college students living in dorms.” Before the prosecutor’s response, Trip includes a quote from the Assistant to President for Domestic Affairs under Richard Nixon in 1994: “we knew we couldn’t make it illegal to be either against the war or black, but by getting the public to associate the hippies with marijuana and blacks with heroin, and then criminalizing both heavily, we could disrupt those communities.”

Then prosecutor responds, chillingly: “He isn’t going to be able to tell you that.”

I ask Lin on the phone about this experience. “Normally I wouldn’t ask that question,” he tells me. “But I felt motivated because I knew I was going to write about it, and because I was really stoned on an edible.”

The epilogue demonstrates how plant-based drugs have rendered Lin “happier and healthier” than he’s ever been, as he concludes in the book’s final pages. In San Francisco, he skips along the hills of North Beach, reflecting that society views skipping as childlike and feminine. But unlike the rest of us, Lin is unafraid of what has been labeled feminine. Through McKenna, Lin learned about the ancient goddess religion; from 40-12,000 years ago, societies worshipped only female deities. It wasn’t until 7,000 years ago, when what Riane Eisler called “dominator cultures” began, that societies began worshipping male deities. This knowledge positively altered Lin’s view of human history, which he’d previously thought “had always been male-dominated and war-obsessed.” Now, he believes humans are recovering from the dominator cultures, and trending back towards a more matriarchal and partnership-based organization. Accordingly, while visiting Harrison, Lin reflects that his book “would trend toward the feminine,” evolving “from yang to yin, dead to alive, Terence to Kathleen.” When reading this, I couldn’t help but find Lin a bit prophetic, as he ostensibly wrote this before the mass patriarchy-toppling of 2017. #TimesUp on dominator cultures.

In the epilogue, Terence McKenna’s son Finn says to the author: “you’re really into this quantitative thing, aren’t you?” It gives voice to the reader’s thoughts. For 189 pages, Lin has painstakingly measured everything from historical eras to his drug intake to his exercise routine. “The Mazatec shaman Maria Sabina,” Lin tells me at one point on the phone, “she lived until her 90s.” (I believe he was trying to prove a point about the health benefits of plant-based drugs.) I ask another, unrelated question, Lin tells me after a long pause: “Sorry, Maria Sabina actually only lived to 89.” Lin is nothing if not meticulous, but that’s not to say this book is devoid of feeling. Fellow author and Lin’s friend Sam Pink wrote in his Goodreads review that he believes Trip “will help shift our gloomy tides,” and I hope he’s right.

Image of author by Noah Kalina 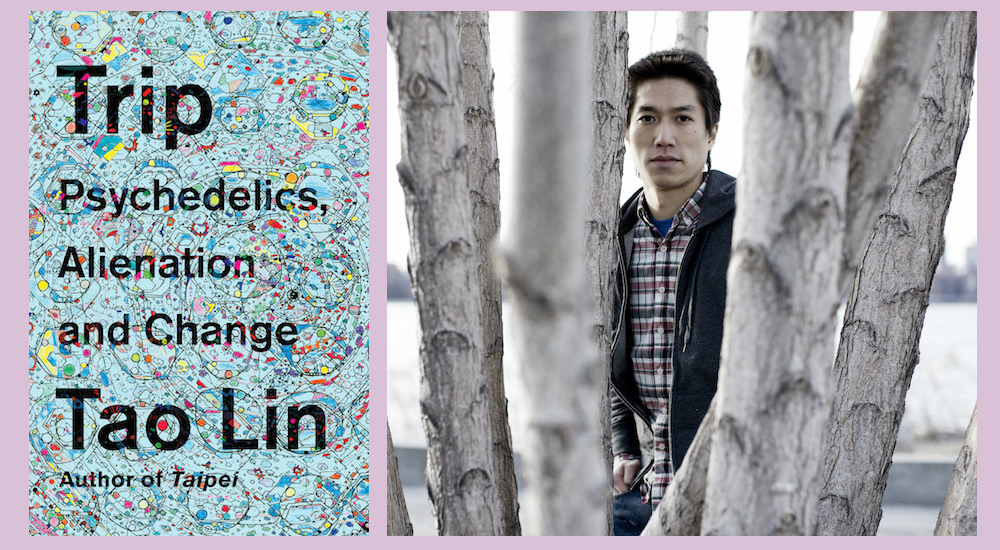