People loved rock and roll long before Joan Jett made an anthem about it in 1982. The genre was born through traditionally African American musical styles and adapted to suit a different audience — a whiter audience. Rock and roll as we know (and love) it drew influence from jazz, gospel, country, and R&B to popularize in the late 1940s and 1950s, and was set on fire by bands like The Beatles and The Rolling Stones. According to Yale-educated music historian Lorenzo Candelaria at the University of Texas at El Paso, audience is what initially distinguished rock and roll from rhythm and blues. Simply put, “rhythm and blues refers to music that was marketed to a black audience; rock and roll refers to music directed at a white audience.”

Hip hop has had an entangled and sometimes combative role in the evolution and consumption of rock and roll that began with racial divisions. The founding of Rolling Stone Magazine gave rise to the “rockstar,” and a culture that idolized elicit sex, heavy drug use, and a “f*ck you!” attitude fans were dying to latch onto. As genres have evolved and overlapped, contemporary hip hop artists like rappers Post Malone and Rae Sremurrd have adopted rock and roll culture in the same manner rock and roll appropriated rhythm and blues nearly 70 years ago.

Figures like Mick Jagger, David Bowie, and Jimi Hendrix were admired for their charisma on stage, and became the epitome of cool. It wasn’t long before the idea of being a rockstar was associated with an effortlessly cool guy who was dangerously charming, buried in beautiful women every night, and guaranteed any drug at any time. The idea is an extended Peter Pan fantasy that often champions misogyny, substance abuse, and a refusal to grow up that appealed to many young men.

Rock and roll, and more specifically the rockstar fantasy, has served to inspire many an angsty boy or girl to stray from tradition, turn up the volume, and escape whatever monotony and injustice may exist for them. It’s meant to be played loud in the same way it’s meant to be an escape. Someone once told me a rock show should feel as though the outside world is on fire and the impending doom doesn’t matter. That’s rock and roll: the ability to drown out the outside world, and set yourself on fire with the words, the sounds, the possibilities.

Today, rap artists dominate the charts in the same way rockers like Mick Jagger did during his heyday. The sex, drugs, and all-nighters that are so heavily glorified are tied to youth. To pursue such a fantasy takes youthful naiveté and fresh energy to pursue it, and today’s young and popular artists doing so are making hip hop music.

Post Malone, a white rapper, broke Apple Music’s streaming single record recently following the release of “Rockstar.” In the first seven days the song was available, it racked up over 25 million streams. This shatters single streaming records across other genres during the first week.

A rap song about being a rockstar is breaking records and being blasted across a multitude of platforms. The concept clearly has mass appeal.

In the song, Malone thrusts listeners into exactly what being a rockstar entails without the corniness of Nickleback’s attempt by the same name:

Ayy, I’ve been fuckin’ hoes and poppin’ pillies
Man, I feel just like a rockstar (star)
Ayy, ayy, all my brothers got that gas
And they always be smokin’ like a Rasta

And of course, a rockstar isn’t much unless trailed by a harem of groupies:

Cocaine on the table, liquor pourin’, don’t give a damn
Dude, your girlfriend is a groupie, she just tryna get in
Sayin’, “I’m with the band”
Ayy, ayy, now she actin’ outta pocket
Tryna grab up from my pants
Hundred bitches in my trailer say they ain’t got a man
And they all brought a friend
Yeah, ayy

Rockstars aren’t exclusive to rock music anymore, in large part due to the fact that hip hop has replaced rock as the most dominant genre of music in the country, which was reported late this summer by Forbes.

Hip hop and R&B, however, is undergoing a Renaissance of sorts as the genres are finally getting due attention after decades of existing on the sidelines. Rappers like N.W.A., Biggie Smalls, Kanye West, and Jay-Z paved the way for newer waves of artists like Lil’ Yachty, Migos, and 2 Chainz to be taken seriously. And they’re all reaping the benefits.

Festival season is also indicative of a shift in genre popularity. Coachella’s headliners this year were Radiohead, Kendrick Lamar, and Beyoncé, with Radiohead playing on the least desirable day, Friday. Chance the Rapper headlined 14 music festivals this year, and odds are this number will continue to increase.

In a cultural cycle of adaptation, rock and roll borrowed and appropriated music from African American genres, and the idealized concept of a “rockstar” has now been reclaimed and reappropriated by hip hop. Rappers flaunt private jets, Lean cocktails, and blow while wearing the freshest of clothes off the runway or hypebeast retailers. A celebrated culture of absurd excess and indulgence is dominating a genre that has often been vilified. The genre is reveling in recognition that it had never received before, and further celebrating success through grandiloquence online. Social media contributes rappers’ abilities to showcase their success in the form of multitudes of posts and stories across Instagram, Snapchat, Twitter, and Facebook. Fans want to emulate the lifestyle they see their favorite hip hop figures by sporting brands like Supreme to align themselves with similarly indulgent lifestyles. Part of the rockstar persona is looking the part, and ensuring that it is both seen and heard.

Rae Sremmurd’s song “Black Beatles” is another song that captures the rockstar lifestyle but is subtle whereas songs like Malone’s are boisterous:

I’m a fuckin black Beatle, cream seats in the Regal
Rockin John Lennon lenses like to see ‘em spread eagle
Took a bitch to the club and let her party on the table
Screamin’ “everybody’s famous”
Like clockwork, I blow it all
And get some more
Get you somebody that can do both
Black Beatles got the babes belly rolling
She think she love me

In many ways this new wave of hip hop artists are more like The Rolling Stones in that they’re reshaping and reclaiming a genre that is already leading to widespread success and flaunting it. In this sense rappers and rockers can both be considered rockstars. Maybe we’re all rock and roll. 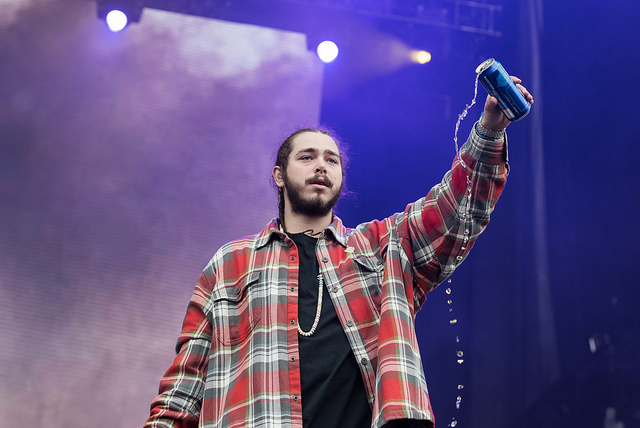