Today is the anniversary of the day, 134 years ago, when a “committee” of prominent businessmen, politicians, and cops stormed into the Chinese neighborhood of Tacoma, Washington, rounded up every family they could find and marched them to a railroad station to be deported to Oregon. Then they burnt and razed all the structures to erase every mark of the Chinese presence. Other cities looked admiringly at what came to be called “The Tacoma Method” of achieving racial harmony. The set of events has much to teach us in today’s era of Trumpian rhetoric and ICE raids — specifically about how the worst violence is often dealt out on a foundation of laws, and how white terrorism needs a patina of “respectability” in order to take root.

Chinese immigrants to the Western US were veterans of the California gold fields and the tracklaying of the Central Pacific Railroad, and they lived uneasily alongside their Anglo neighbors while the Civil War tore up the East. Many of them were invited to come live in Tacoma to help build the western side of the Northern Pacific Railroad. As the postwar economy declined, they became targets of blame by the Irish labor leader Dennis Kearney and his Workingmen’s Party, who chanted “The Chinese must go!” at their rallies. This simpleminded idea helped persuade Congress to pass the Chinese Exclusion Act in 1882, barring all new emigration from that country for 10 years.

Tacoma’s attitude took blunt form in The Tacoma Daily Ledger. Multiple political personas endorsed the idea of expelling their Chinese neighbors, primarily the mayor of Tacoma at the time, R. Jacob Weisbach, who convened an “Anti-Chinese Committee” on October 4, 1885. Weisbach was inspired by a prior expulsion in Eureka, California. There was “a large torchlight procession terminated in an enthusiastic meeting at the Alpha Opera house” in which multiple resolutions aimed at expelling the Chinese were put up for a vote. One John E. Burns “argued that the Chinese were not here under the Burlingame Treaty, but were here as invader.”

On November 3, 1885, at around 9:30 in the morning, a crowd of Tacoma citizens marched into Chinatown, knocked on doors and told all the Chinese that they were to leave by 1:30 in the afternoon. By the affidavit of Lum May:

They went to all the Chinese houses and establishment and notified the Chinese to leave. Where the doors were locked they broke forcibly into the houses, smashing in doors and breaking in windows. Some of the crowd were armed with pistols, some with clubs. They acted in a rude boisterous and threatening manner, dragging and kicking the Chinese out of their houses.

Some were allowed back for approximately 48 hours to gather any items they had left, then driven out again. Such was the case with one Kwok Sue, who recalled,

About half past 9 o’clock in the evening of the 3rd of November 30 or 40 white men came into the house and asked who was the boss. I told them I was. Four or five of them pulled their pistols out of their pockets and said, ‘You are a son of a bitch. You must get out of the house.’ I told them, ‘Gentlemen give me the time that the Sheriff has allowed me, the 48 hours.’ They said: ‘We have no time to give you. You should have gone about half past one to-day.’ I then became frightened, left went away and went out into the Country about a mile and a half from town to an Indian Agency, where I remained till the 5th when I saw the fire of the burning Chinatown.

The fire department made no attempt to extinguish it.

The purge was received with both cheers and protest across the country. Legal consequences at first seemed certain. The leaders Weisbach, Dolphus B. Hannah, William Christe and 24 others were summoned to testify before a grand jury in federal court, which handed down indictments of conspiracy, insurrection and inciting insurrection. The bail was $5000; the citizens of Tacoma donated and paid it. When the leaders returned to Tacoma, they were greeted with a band and hailed as heroes. All charges were dropped.

The effects rippled at a high level. President Grover Cleveland became convinced, thanks to the violence, that the cultural differences of the Chinese made it difficult for them to assimilate peacefully into society, and thus wanted to strengthen the Chinese Exclusion Act. The Bayard-Zhang Treaty banned the return or immigration of Chinese for 20 years. It was signed in March of 1888.

The Tacoma Method “worked” — it gave white citizens the purging they wanted and it helped push events in a dismal direction on a national level. If there is any lesson for today, it lies in the example of how local passions can spin out of control and how the coloring of legitimacy often hides actions that later become moral stains. 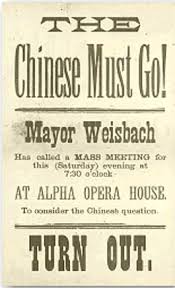