In May 2019, nearly one billion people in the world’s largest democracy cast their votes to give the ruling Bharatiya Janata Party (BJP) government under Prime Minister Narendra Modi a landslide victory. The Indian National Congress — India’s stalwart of secularism, now led by the inheritor of the Nehru-Gandhi dynasty Rahul Gandhi — was not even able to win enough seats within the Lok Sabha (India’s Parliament) to form an official opposition. This election became a contest of personalities — Modi versus Gandhi. Gandhi’s economic agenda and push to highlight the BJP’s poor economic policies failed to resonant among an electorate enthralled by Modi’s muscular nationalism and personal popularity.

Adulations from abroad quickly began, praising Modi’s strong leadership and highlighting his economic initiatives and promises. Steven Rattner, a former economic advisor in the Obama administration, argued in The New York Times that “India Needs Modi,” lauding the leader for his economic policies over the previous five years. Political scientist and Eurasia Group president Ian Bremmer earlier called Modi “India’s best hope for economic reform.” And countless world leaders, including Pakistani Prime Minister Imran Khan and US President Donald Trump, offered congratulations for the BJP’s electoral successes. Securing an even stronger majority and without an official opposition, Modi declared, “Elections divide and create a gulf but 2019 polls broke down the walls and connected hearts. They united the society. The people have started a new era and all of us are a witness to it.” While Modi may have spoken of a “united” India in the wake of his victory, his path to power rested upon sowing fear and division within Indian society, a consistent theme in his party’s electoral rhetoric. Though Modi won praise for economic policies, the BJP sidelined economic issues in its campaigns and prioritized nationalism and Islamophobia, goaded on by the recent tension with Pakistan over the Pulwama attack in Kashmir.

The BJP’s vilification of India’s many minority communities — in particular its sizable Muslim community— was less an instrumental electoral strategy to consolidate popular support, as many have argued, but reflective of the party’s core beliefs. Modi and his party are champions of Hindutva (“Hindu-ness”), an ideology arguing that Indian civilization rests upon the religion, history, and culture of Hinduism and in stark opposition to the secularism espoused by the Congress Party.

Quite distinct from the Hindu faith and its theological teachings, Hindutva is a modern political ideology that emerged in the early 20th century amidst India’s struggle for independence and the fierce political debates about how to define an Indian political identity. The ideology’s foundational ideas were first introduced in a 1923 political pamphlet — Hindutva: Who is a Hindu? — by Vinayak Damodar Savarkar, an anti-British activist writing during his imprisonment on the Andaman Islands and in Bombay’s Ratnagiri Jail. Savarkar developed a vision of Indian nation built upon the idea of Hinduism as not just a religion but an ethno-cultural identity that gives the majority Hindus a special claim to the land of the religion’s birth, a view strongly opposed to the secularism espoused by the leading Indian National Congress. “The Hindus,” he argued, “are not merely the citizens of the India state because they are united not only by the bonds of the love they bear to a common motherland but also by the bonds of a common blood … We Hindus, are all one and a nation, because chiefly of our common blood.” To be Indian is necessarily to be Hindu. In the defense of his conception of Hindu identity and its exclusive right to the land of India (or Bharat), he made explicit comparisons to Zionist arguments for the Jewish right to Palestine. Within this ideological frame, any aspect of India’s history or culture associated with non-Hindus is antithetical to Indian identity. M.S. Golwalkar, a former Rashtriya Swayamsevak Sangh (RSS) chief, a militia that has been a mobilizing force for Hindutva since its founding in 1925, wrote in 1938: “The non-Hindu people of Hindustan must either adopt Hindu culture and language, must learn and respect and hold in reverence the Hindu religion, must entertain no idea but of those of glorification of the Hindu race and culture … in a word they must cease to be foreigners, or may stay in the country, wholly subordinated to the Hindu nation, claiming nothing, deserving no privileges, far less any preferential treatment — not even citizens’ rights.” The message was clear — assimilate to Hindu culture or abrogate your rights.

The adherents of Hindutva, in particular, view Muslims, who comprise 15% of India’s total population today, as foreigners who invaded the Indian Subcontinent a millennium ago as conquerors, much like the British after them. For the majority Hindu population, according to Savarkar, the centuries of rule under Muslim kings and emperors, established “by hordes of barbarians, so inferior to them”, desecrated “the cherished ideals of their race.” Islamic rule within the Indian Subcontinent, within Hindutva’s historical reading, helped to create the oppositional idea of a Hindu nation. Therefore, any aspect of India’s history and culture associated with Islam, from cuisine to architecture to language, is considered an imposed and illegitimate part of Indian culture, with Modi referring to this period of history as “1,200 years of slavery.” The BJP government, for instance, has challenged the “Indian-ness” of India’s most famous historic site the Taj Mahal in Agra, built in the 17th century by Mughal Emperor Shah Jahan. One BJP politician referred to the monument as a “blot” on India constructed by “traitors” and “should have no place in Indian history.” Yogi Adityanath, a Hindu cleric perpetually clad in saffron robes appointed the BJP chief minister of India’s largest state Uttar Pradesh in 2017, argued that the Taj Mahal “did not reflect Indian culture” and praised Modi for gifting foreign dignitaries copies of the Hindu religious texts Bhagavad Gita and Ramayana instead of miniature replicas of the Taj. The government also began renaming cities and other public spaces bearing Urdu or Muslim names, such as changing the name of the city of Allahabad, founded in the 16th century by Mughal Emperor Akbar, to Prayagarj. BJP politician Sangeet Som even argued, “If these people are part of our history, then it is very sad, and we will change this history.”

The ideological foundation of Hindutva, however, is no mere historical revisionism. Much of the BJP’s hostility towards the Islamic past is directed at India’s Muslim population today, whom they argue have no claim to call India their own. Yogi Adityanath, a hardline promoter of Hindutva, stated in 2005, “I will not stop until I turn [Uttar Pradesh] and India into a Hindu rashtra [nation],” vowing that “if [Muslims] kill one Hindu man, then we will kill 100 Muslim men.” He proclaimed the 21st century the “century of Hindutva” and promised to cleanse the nation of other religions. Surendra Singh, a BJP Member of Uttar Pradesh’s Legislative Assembly, announced in January 2018 that India would become a purely Hindu nation by 2024 (the final year of Modi’s second term as prime minister) and all Muslims will need to either convert to Hinduism or leave the country. He argued, “There are a very few Muslims who are patriotic. Once India becomes a Hindu rashtra [nation], Muslims who assimilate into our culture will stay in India. Those who will not are free to take asylum in any other country.”

Since 2014, the BJP government has pursued a number of policies to fulfill their vision of creating a Hindu nation divorced from the secularism enshrined in India’s constitution. Critics have pointed to these policies as vehicles of discrimination against Muslims. Soon after gaining power in 2014, for instance, the BJP began to implement stricter laws across India against the slaughter of the cow, considered sacred in Hinduism. The government began closing down small-scale slaughterhouses, overwhelmingly owned and staffed by Muslims, under suspicion of illegally butchering cows. The new law banning cow slaughter nationwide was extreme enough for the Supreme Court to suspend it in July 2017. Ali Khan Mahmudabad, a professor of history at Ashoka University and the son of the Raja of Mahmudabad, explained to me that such policies are aimed at economically weakening and further marginalizing Muslims. He drew parallels to the Nazis in Germany during the 1930s first targeting the Jewish community’s economic livelihood. In recent months, the BJP government also has pushed for a National Registry of Citizens (NRC) throughout the country to help restrict immigration and, according to the BJP president and newly appointed Home Minister Amit Shah, “remove every single infiltrator from the country, except Buddha, Hindus, and Sikhs.” Shah singled out the largely Muslim Bengali immigrants as “termites,” promising “to throw them into the Bay of Bengal.” In northeastern Assam, where the NRC has already been implemented, there are fears that this measure could be used to strip Muslims of Indian citizenship to shift demographics in favor of the Hindu population.

Like lightning preceding thunder, the BJP’s rhetoric and policies have served as a catalyst in stoking communal violence, especially cow protection groups emboldened to attack Muslims under suspicion of slaughtering cows or transporting beef. In March 2017 in Latehar, for example, a cow protection group hanged to death Muhammad Majloom and Azad Khan after torturing them under suspicion of selling beef.  Shortly after, a Muslim teenager, Junaid Khan, was stabbed to death on a train in Haryana after being accused of carrying beef.  In July 2017, an “irate mob” in Jharkhand attacked Ainul Ansari as he headed to an Iftar party during Ramadan after mistaking the mutton he carried for beef.  Recently, in May 2018, a Muslim tailor, Siraj Khan, was beaten to death by a mob in Madhya Pradesh following accusations of slaughtering a bull. There have been 73 such cow lynchings since 2014. Critics of Modi, who himself was implicated in the 2002 anti-Muslim riots in Gujarat when he was chief minister, argue that he has done little to address the increase in violence against Muslims or rein in the incendiary rhetoric of senior BJP politicians. And, through his silence, he is creating a “climate of impunity.” The BJP leadership even endorsed the successful candidacy in the 2019 elections of Pragya Singh Thakur, who is currently facing terrorism charges for a bombing attack against Muslims in 2006 and praised Mahatma Gandhi’s assassin as a “patriot.”

During a visit to the Jama Masjid in Lucknow, its elderly muezzin showed me around the cavernous mosque. As we slowly strolled beneath the vaulted and intricately decorated ceilings and arches, we spoke of the mosque’s history and Persian-inspired architecture, constructed in the early 19th century with the intention of surpassing in beauty the Jama Masjid of Delhi. As our conversation turned to the current political situation under Uttar Pradesh’s BJP government, his warm and hospitable visage quickly shifted. With anger and fear coloring his voice, he said that it was not only Muslims’ economic well-being but their lives that were now in danger. He repeatedly called the BJP “mussulman ka dushman” — the Muslim’s enemy.

The “unity” of the Indian people envisioned by Modi is premised on a Hindu identity excluding minority communities and undermining the country’s secular foundations. In his victory speech, Modi declared that the election results showed that “not one political party has been able to deceive the people of India by wearing the label of secularism.” The results of the 2019 election further empower Modi and the BJP who see the outcome as a ringing endorsement of their Hindu nationalist policies. With the Hindu right increasingly dominating the political landscape on the shoulders of Modi, larger questions remain whether the very character of Indian democracy is fundamentally changing. Is this a definitive statement of India’s rejection of secularism and a long-term embrace of Hindu nationalism? Or can a new secular and united opposition emerge to challenge Modi and the BJP on a national level? Only time will tell. 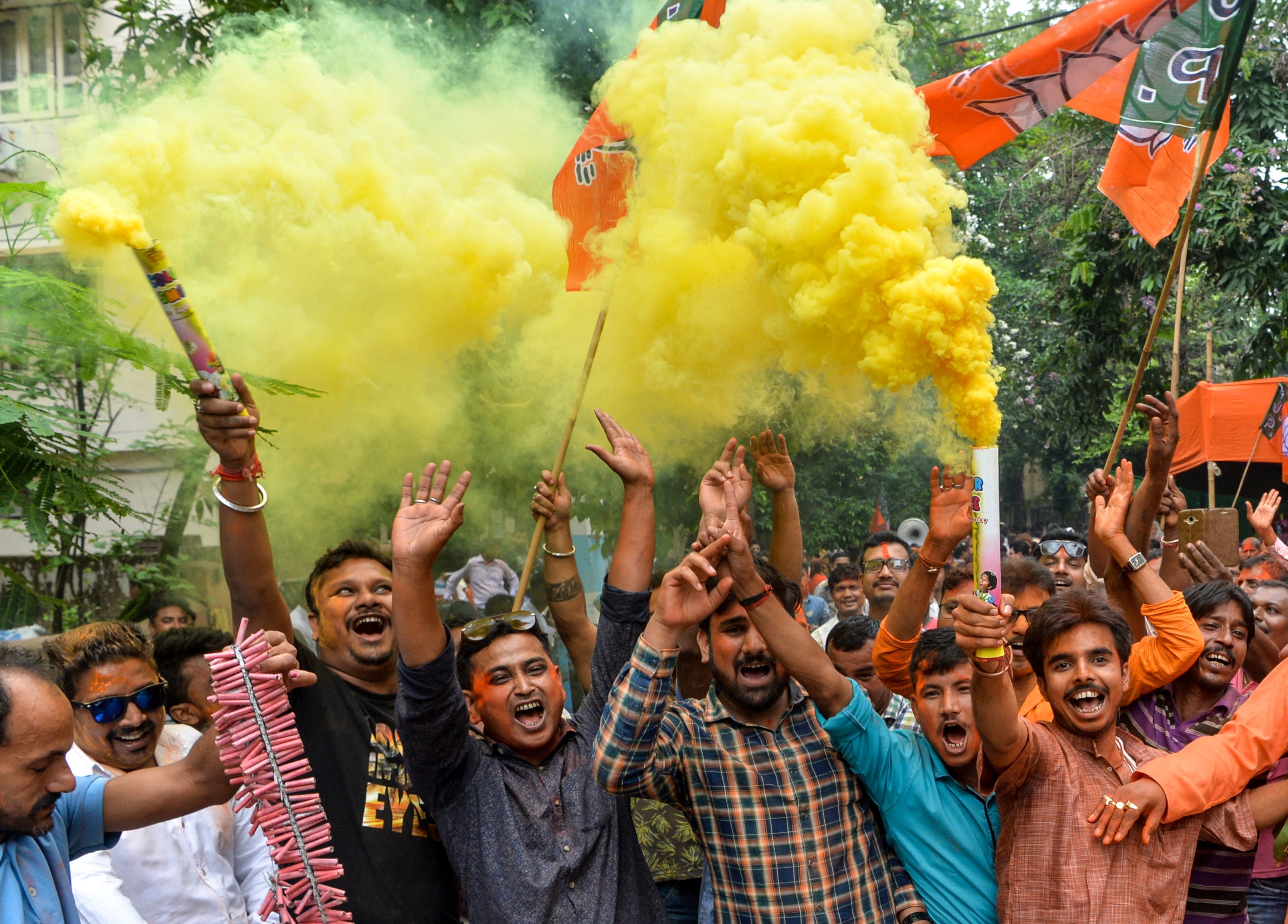