In 1983, Ronald Reagan declared May 25th “National Missing Children’s Day,” marking the four-year anniversary of Etan Patz’s disappearance in Manhattan. Six-year-old Etan was the first child to have his face printed on milk cartons nationwide, and his body was never found. He was declared dead in 2001. (Last April, a man named Pedro Hernandez was convicted of kidnapping and murdering Etan, but some doubt his guilt and mental stability.) Etan’s disappearance shocked the country, and in its wake, laissez-faire parenting gave way to paranoid cynicism. Contemporary childhood was thus born, complete with curfews, cautionary tales, and warnings against talking to strangers.

In a different 1983, the one imagined in the first season of Netflix’s Stranger Things, another child goes missing. The victim this time is middle-schooler Will Byers (Noah Schnapp), who, it turns out, is trapped by a monster — the Demogorgon — in a parallel dimension. Over the course of the season, Will is the subject of search parties, a premature funeral, and, ultimately, a successful rescue mission. In season two, dubbed Stranger Things 2, Will is again the target of nefarious forces: he becomes possessed by the Mind Flayer, a bigger and badder foe. But as imaginative and fantastical as the monster-flick premise may sound, it isn’t the most unbelievable aspect of life in Hawkins, Indiana.

Stranger Things 2 is set a year after season one, in 1984 — and Joyce Byers (Winona Ryder), the single mother of Will and his brother Jonathan (Charlie Heaton), is understandably still reeling from the Demogorgon ordeal. As a result, her protective instincts have kicked into overdrive: she keeps track of Will at all times, regularly calls his school to check on him, and insists on driving him around rather than letting him ride his bike. Having experienced the traumatic loss of a child, albeit temporarily, Joyce struggles to return to her previous way of life. And the fact that her unwavering commitment to keeping track of her son contributes significantly to the defeats of both the Demogorgon and the Mind Flayer is telling: she is a parent fit for her terrible time.

Stranger danger, meet Stranger Things. The two stories aren’t exactly the same, however: whereas Etan’s case lastingly shook the nation, the residents of Hawkins, Indiana seem to get over Will’s disappearance awfully quickly. Perhaps Will’s eventual rescue at the end of season one helps to restore Hawkins’ small-town tranquility, but Barbara Holland (Shannon Purser), a high-school student, remains missing throughout all of Stranger Things 2. (She was killed by the Demogorgon in season one, but, until the end of season two, her parents believe that she is still alive.) Nonetheless, life carries on as usual. Kids ride their bikes freely at all hours, and their parents ask few, if any, questions.

Nowadays, after Etan Patz, Amber Hagerman, and countless other cases of child abduction, Stranger Things 2’s safe and secure domesticity seems mythical. That domesticity — not the Mind Flayer — is the show’s true fantasy. And ultimately, the fantasy extends from the characters’ social realities to their economic ones; the Hawkins children’s sense of security mirrors their parents’ financial stability. Even the Byers, arguably the show’s most financially troubled family, manage to make ends meet. Joyce supports herself and two children on a store clerk’s wage, after all.

Stranger Things 2’s fantasy exists in a unique historical moment: an era of fearless liberation, untouched by Etan Patz’s disappearance but radically shaped by America’s post-bomb familial upheaval. Counterculture, the Sexual Revolution, and the Women’s Movement have prevailed. The atomization of the nuclear family is underway, and almost all of the families in Stranger Things 2 deviate from the traditional units of husband, wife, and kids. Police chief Jim Hopper (David Harbour), whose marriage couldn’t survive the death of a daughter, becomes a substitute father for Eleven (Millie Bobby Brown), a young, telekinetically gifted girl who has a difficult family history of her own — she was separated from her mother, raised in a lab, and refers to the man who oversaw the experiments performed on her as “Papa”; the Mayfields/Hargroves are a blended family; Kali Prasad (Linnea Berthelsen), another character with supernatural powers, lives with a band of outcasts that evokes modern understandings of chosen families; and more.

Even the seemingly conventional families in Stranger Things 2 appear to be on the verge of, or susceptible to, transformation. The season’s most charged sexual interaction, for instance, occurs when Karen Wheeler (Cara Buono) — a picturesque wife and mother — coyly reacts to the smooth talk of high-school-bad-boy Billy Hargrove (Dacre Montgomery). Billy looks way better than he has any right to — shout-out to that wig and those all-denim outfits — and in his conversation with Mrs. Wheeler, he embodies a primal sex appeal that the housewife seems quite drawn to. Viewers get to witness Mrs. Wheeler flirt not only with Billy, but also with the idea that sex could be more than a thing she does (or doesn’t do) with her uninspiring husband, who sleeps on the living room chair while Mrs. Wheeler reads romance novels in candle-lit baths. Given the context of her marriage, then, Mrs. Wheeler’s exchange with Billy is exceptionally compelling; there’s more sexual tension in the pair’s brief bout of flirtation than there is in the entirety of Nancy Wheeler (Natalia Dyer) and Jonathan Byers’ will-they-won’t-they plotline.

And why not? The 1970s and ’80s saw a veritable divorce boom linked to the feminist movement, and familial upheaval (and even relatively small self-emancipations like Mrs. Wheeler’s) was ever-present in the era, as it is throughout Stranger Things. Families ebb and flow, coalescing around circumstance more than DNA. The show’s young protagonists, by branding themselves a “party” à la Dungeons & Dragons, essentially form a family of their own, free of commandments except for the one: friends don’t lie. It’s as good an ethos as any.

It bears mentioning that Stranger Things 2’s treatment of families can also be reductive. Viewers learn that Billy is abused by his father, and that he takes that abuse out on his stepsister. There is a striking parallel between the transmission of rage to Billy from his father, and the Mind Flayer’s possession of Will, but the show forgoes the opportunity to use Billy’s character to more deeply consider the impact of parental separation and abuse on teenagers. Instead, with archetypal high-school drama in mind, Stranger Things 2 ends up mostly limiting Billy to his role as a bully. He’s bad, and in the end he loses. Justice prevails.

But a 21st-century audience knows that the bubble’s about to burst on Hawkins; that the fantasy can only sustain itself for so long. Reagan is about to trounce Walter Mondale, win reelection, and further cut regulations and government spending while increasing the national debt. Families will continue to shift and adapt to a changing world, and kids will no longer ride their bikes unsupervised.

It’s easy to forget that Stranger Things 2 is fantasy — wondrous, enthralling fantasy, but fantasy nonetheless. There’s genuine hurt beneath the show’s escapist sheen — the kind of hurt caused by real, not imaginary, monsters: parental negligence, deceptive governing, death — but Stranger Things 2, for the most part, keeps it at a distance. The show isn’t concerned with history’s uncompromising advance, with the ongoing disintegration of people and communities, save a shot of a Reagan/Bush lawn sign.

In a few decades, when the inevitable Stranger Things: Reboot airs, it will star a new party of adventurers — maybe the children of Will and his friends. Perhaps it’ll be set in 2017, and Will, after having been kidnapped and possessed by monsters, will have shipped off to Iraq. A rapid montage of his traumas will jump from the Demogorgon to the Mind Flayer to Fallujah. His kid will have a cellphone, and Will will call it regularly. There are some things that you just can’t forget. 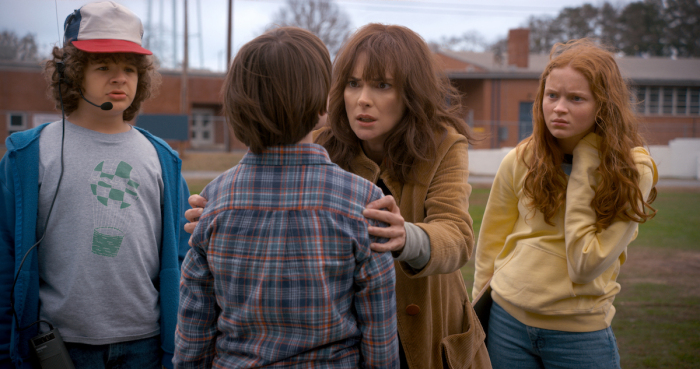