At the forefront of human endeavor come guinea pigs. Any time there’s a worthwhile innovation, these tiny rodents are on hand to test it. And now, to top off these numerous services to humanity, we have A Guinea Pig Romeo and Juliet. It’s a contribution that cannot easily be measured.

As author of the book and star of The Guinea Pig Diaries, A.J. Jacobs wrote to me by email, “I’ve always been grateful for what guinea pigs have done for science. It’s good to see they’re now making important contributions to literature as well.”

For those of us with our finger on the pulse of cavy culture, though, “Romeo and Juliet” comes as only mild surprise. Tess Newall and Alex Goodwin have been dressing up these purring tribbles in period clothing and making high quality children’s books out of the resulting photographs for three years now.

In Britain Bloomsbury are already deep into the Guinea Pig Classics series. The pioneering Guinea Pig Nativity led to Newall and Goodwin’s next project, Jane Austen for cavy. A Guinea Pig Pride and Prejudice (2105) met with acclaim, and was followed by the equally delightful A Guinea Pig Oliver Twist (2016). So what would famous author would the creators next choose for those lovable English rodents?

They went for a big one. The biggest. The Bard.

Like any excellent troupe — especially ones with a life span of more than 4-8 years — the core stays the same, just getting tighter with practice. Molly and Sherlock return from both the previous two installments to provide excellent tragicomic turns as Juliet’s Nurse and Friar Lawrence.

Here in Verona, though we welcome Marlin and Blair as Romeo and Juliet, it is Oscar who steals the show with a nose-in-the-air dominant role as the Prince. On the Facebook page of the series, @guineapigclassics, Oscar is pictured admiring himself on the opening page through classic thespian leisure glasses.

Two households, both alike in dignity,
In fair Verona, where we lay our scene…

On that same Facebook page, Salman Rushdie is quoted as saying: “This may be the definitive version of Pride and Prejudice. If they could get War and Peace down to this length, it would be a service to mankind.”

And he has a point.

Like a comfortable armchair upon which you might read one of these tiny masterpieces, the success of the series — and let there be no doubt that it is a triumph — rests on four points: the iconic but charming literature upon which each book is based; the unwavering cuteness of the guinea pigs; the delightful styling of each photograph with costumes by Newall; the sparse brevity of Goodwin’s adaptations that preserve the essence, the aesthetic, and the language of the original while winnowing, for example, Romeo and Juliet to about twenty postcard-size pages containing rarely more than a couplet.

Adding to the charm is the luxurious print job provided by the publisher. Except for size, the matte color small format hardback with gilt trim covers full of luscious color glossy pages wouldn’t be out of place on a serious bookshelf. Of course, these are gimmick gifts for lovers of literature or owners of guinea pigs — and among those latter you can count the late Princess Diana (Peanuts), soccer world cup winner Per Mertesacker (still sad about the loss of Spike decades ago), and President Teddy Roosevelt. But these are also, plainly, excellent children’s books. They are short enough and cute enough to get the parents through the classic story again, and they are accurate enough in plot and flavor to whet any child’s appetite for the full-length version, in due time.

During the past few years, Ecuadorians, Colombians, and Peruvians have also begun to bring guinea pigs to American attention. For them, though, the delicacy is less literary and more gastronomical. Incarnated as cuy and served roasted, guinea pigs use only half the resources that a cow would use to make the same meat. While I applaud the South American commitment to ecological improvement, I have to say that, for this reader — with a PhD in literature and two cute guinea pig pets — the mental refreshment of the Classics series is far preferable.

(For a story on my guinea pig’s bar mitzvah, see here.) 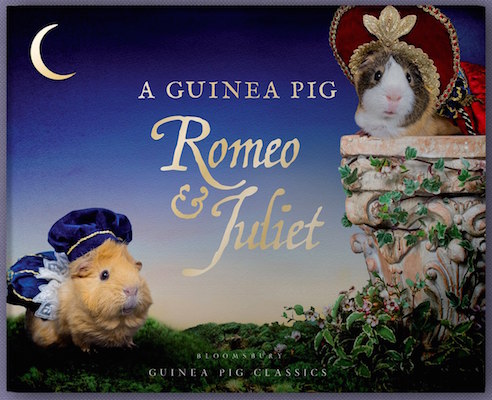