“Is that smoke from the fire?” A man yelled to his neighbor walking a dog. “Jesus.”

It was Monday morning in San Francisco, and every resident had learned of wine country’s wildfires by checking the Internet or first calling their local fire department to report the smell of a fire nearby. The smell was immediate, pervasive, and unmistakably close, like a late night campfire you awake to still burning.

One could be forgiven for thinking their neighbor’s home might be in flames. The sky didn’t help matters; a grey-white canopy hung over parts of the city, giving off a dim, sunless pallor.

I admittedly was less curious than my neighbors, and had waited a few minutes, maybe an hour, before looking for answers online. I had first sniffed the corners of my apartment, opened our oven and bathroom window to make sure it wasn’t our home or the apartment downstairs. I was struck by a feeling of guilt, when I discovered — to my great relief — that the fires were far away. Or, at least, far enough away. There is a complicity one feels through the comfort of distance — 50 miles is less than an hour’s drive when it’s somewhere you want to be; it’s a world away when a natural disaster hits.

So I drove toward the wildfires.

“California is a place in which a boom mentality and a sense of Chekhovian loss meet in uneasy suspension,” Joan Didion wrote, “in which the mind is troubled by some buried but ineradicable suspicion that things better work here, because here, beneath the immense bleached sky, is where we run out of continent.”

The state has inartfully suppressed much of this “ineradicable suspicion,” by pushing massive structures and suburbia up against nature’s edge. But occasionally California’s techno-utopian façade cracks, giving way to something unmistakably feral, that “secret source of malevolent and benevolent energy.” (Didion again.)

You don’t have to drive far.

On the drive up into Sonoma, it occurred to me I was not prepared in anyway to cope with the conditions, so I stopped off to find a mask and some extra bottles of water. Every hardware store I stopped in was out of masks. At the last one, my fourth before I gave up and drove on, I told the store clerk I was heading toward the fire on an assignment, hoping he might relinquish a few he might’ve saved for personnel.

“Sucks for you,” he said. Then he thought about it a second and recommended an old painter’s trick I’d known but forgotten about: “wrap a wet bandana around your mouth,” he said.

In Santa Rosa, sporadic fires tore through neighborhood developments with the speed and randomness of hopscotch — that street, and not the one over, their home, and not the one with which they share a fence. I watched one man scrub licks of black smoke off the lip of his garage door while his neighbor, bent over, sifted through the rubble and ash that remained of his home. There’s drone footage of the before and after variety. If you’re curious, CNN will scratch that itch. Web commenters upon seeing the photos could only liken it to something they’d seen on a videogame: Fallout 4, namely.

Wildfires have the quality of transforming the mundane into fantasy. Even the city’s fire station was claimed in the flames, its hulking garage doors charred and skeletal.

Last Tuesday, I watched families dig through their remains: A teenage boy dug a glass weed bowl from the rubble, and held it up over his head. “The bowl made it out,” he said.

I spoke to a woman who was running sprinklers on her roof and yard in case fires were to return. I watched a man fill a large plastic storage container with water, just in case.

There was no forewarning: wildfires do not give jovial weathermen and cable news anchors a chance to sow encroaching doom, they lack the operatic build-up of a hurricane, for example. And cities complicate fires, the sprawl of buildings and homes pushing up against the edges of nature, exaggerate their unpredictability. Wind can push a burning ember more than a mile in any direction. One fire can become 20 in the right conditions, and so they appear at your front step, in your home, across the street. Fires jump, they ignore rules and systems.

Still, fires can make heroes, and one man was anointed as such in his neighborhood because he’d awoken to the smell, saw a red blaze from his window and started running through the street, knocking on doors, ringing doorbells, and waking people one by one. A woman standing in a lot over said he saved her life. On Tuesday, he too was sifting through charred remains.

At least 40 people have died since these fires first appeared on the night of October 8, spurred on by dry heat and strong winds. Sixty-eight are still missing, as firefighters fight to contain the remaining wildfires that have charred over 240,000 acres of land and 5,700 homes and structures.

But even disaster cannot resist routine, and in Santa Rosa, a city of 175,000, residents were already taking their place in a new grind. Policeman wore masks and drank Gatorade, blocking homeowners from the edges of roads they gathered at waiting to hear a sliver of information about the home they were forced to flee days earlier. Fireman worked 24 hours shifts, carrying with them a 7000-calorie knapsack filled with PBJs, candy bars, granola, fruit and sandwiches. Teenagers eager to volunteer, idly circled the Sonoma County Fairgrounds where a crisis shelter had been created, picking up trash and handing out bottles of water to newcomers.

Even the news coverage has fallen into a rhythm now; the sobering statistics fill into prewritten paragraphs with alarming ease. Cable news b-roll of melted cars and roaring flames overlaid with shrill chyrons are cut in between commercials about impotency and weight loss.

Most Americans, with increasing dread for the familiar, will watch these fires on one screen or another the way they watched the hurricanes that battered Texas and Puerto Rico weeks earlier. Temporarily, they may feel the not-so-distant threat before closing the tab, or switching the channel, but the effect is the same. Fear and paranoia, urgent or abstract, pervade to the point of mundanity. As Don DeLillo once described drivers in Manhattan traffic, today we’re “slumped in the gloom like inmates watching daytime TV.”

On Friday in San Francisco, people could be seen walking the streets wearing masks; at cafes, friends could be overheard remarking that the air quality was on par with New Delhi and Beijing, major cities that have come to live with toxic air pollution.

These fires are not distant; but that’s no matter: They are not our fires, not today anyway. 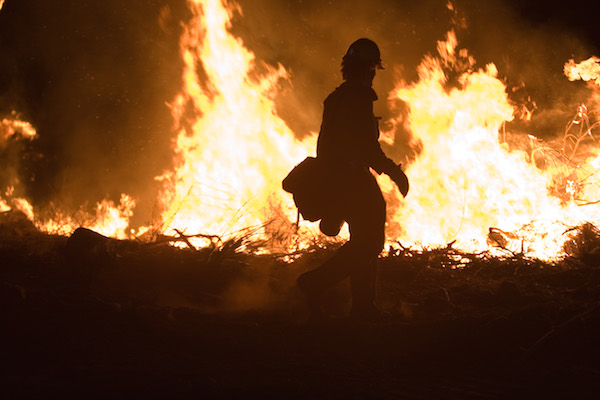