For quasi-religious Los Angeles Jews like me, Fairfax Avenue is a national heritage site. The best place, if not the only place, to get a decent pastrami sandwich without making the schlep downtown to Langer’s Delicatessen.

It was where I first heard the word schlep.

I grew up on Fairfax. A gooey Schwartz’s Bakery challah was a Friday-night tradition. My babysitter was next-of-kin in the prodigious Canter’s Deli dynasty.

Fairfax shaped my view of Los Angeles: a self-contained, three-block enclave butted up against the Korean high-rises of Wilshire Boulevard. Fairfax was also how I defined my Judaism: in the form of smoked fish rather than in a synagogue.

But the street began to change around 2005, and tangibly so. Deli men ceded to retail girls who ran flagship stores for emerging designers of a new generation, their clothes never meant for the average Jewish resident of Fairfax. Modern condominiums occupied lots adjacent to stand-alone craftsman houses. V-necked men joined Orthodox Jews at the bus stop. Large beards on both made it hard to tell which was which.

This visual tease only scratched the surface of the burgeoning tension between the two cultures that seeded Fairfax. Just as the street changed, my perspective of the city did too.

If 2005 was the precipice of a changing Fairfax, 2018 has proven the street virtually unrecognizable. I became nostalgic for the community I once knew: for the prickly old lady who sat behind the counter at the Jewish optical store; for the blasé fishmonger whose payois protruded from his cramped hairnet. Walking down Fairfax is now a pain, constantly having to navigate around the clouds of marijuana smoke and the sweeping doors of gaudy Lamborghinis.

One would think it’s the same old tale of an economic process happening throughout the United States.

But writing Fairfax off with the dreaded G-word minimizes the complexity of the street. These aren’t the techies of Silicon Beach, nor are they the yuppies of Echo Park. There is not a single juicery on Fairfax, nor is there an Equinox in sight. The streetwear brands that have moved in are young, of a multitude of backgrounds, and think differently from their hipster counterparts they are often mistaken for. Looking at Fairfax’s past is key to understanding its current form.

With its shining neon sign and enticing pastries lining the windows, Canter’s Deli is a recognizable Los Angeles landmark. The black and white tiled exterior of Canter’s has stood since 1939, but its history in Los Angeles stretches back to 1931 when Ben Canter and his two brothers moved out west after their Jersey City deli closed. They settled in then-Jewish Boyle Heights, opening Canter Brothers’s Delicatessen. Their website details the decision to move to Fairfax: “ When the character of the neighborhood changed ” — an apparent euphemism for the influx of Black and Brown people that soon came to their neighborhood — the Canters purchased a storefront at 439 North Fairfax Avenue, riding the wave of mass migration to Fairfax aided by the newly-constructed trolley car. Successful in the trade and banking sectors, a Jewish elite class emerged, moving to the Fairfax District as a status symbol; a tool to distance themselves from the Yiddishites still in Boyle Heights whom they believed poorly represented Judaism to WASP-y Angelenos.

By the early 1960s, only New York and Tel Aviv had more Jews than Los Angeles. The three-block stretch of Fairfax housed some 30 Jewish owned-and-operated businesses, providing the cultural infrastructure for a population so concentrated in the area. Newly built apartments and assisted-living facilities drew in those from multiple generations, classes, and national identities. Los Angeles Jews — some born here, others barely speaking English — constructed their own cultural lexicon. Its contours, refined by its consolidation on Fairfax, were different, still, from those of the Jewish Americans who lived in New York’s tenement buildings. Fairfax was practically a shtetl, easily mistaken for Warsaw. English wasn’t the lingua franca. Eventually, the Jewish Federation of Greater Los Angeles was established nearby on Wilshire Boulevard. More than religious guidance, the Federation encouraged the transmission and reinforcement of cultural artifacts to unify this community. It wasn’t just Judaism that bound them — it was Fairfax.

Ironically, it was this increased cultural acceptance and prosperity of Los Angeles Jews that led to their downfall on Fairfax. No longer inhibited by redlining that segregated their peers, Jews expanded westward to the Pico-Robertson area; others to the San Fernando Valley. Aided by FHA loans, 120,000 Jews lived in the Valley by 1980, more than in any region of the city. Fairfax, the insular shtetl it was, became a place to escape from; as residents left, its practices escaped from the mainstream into obscurity.

The diaspora of Jews from Fairfax into suburbia during the post-war years had complex implications for the community’s relationship to assimilation. Acculturated Jews, outwardly accepted by their gentile neighbors, were a success story for an idealized American Dream that often eluded other groups. But the Americanization of some Jews incidentally strengthened the cultural orthodoxy of those along Fairfax, defining themselves in opposition to Valley Jews. They were unwilling to give up their vernacular and deep-seeded notions of community for a modern lifestyle of tract-house living. Fairfax was the community its residents had known for so long. Why leave?

The Jews of Fairfax limped through the 1990s as the void left by their large scale dispersal was filled with the emergence of a “sneakerhead” community, a once-obscure band of aesthetes whose style was propelled into the mainstream when the fashion industry began to take notice. The sneaker became a fetishized and sellable commodity — a status symbol. Split between Fairfax and the Valley, this fragmented Jewish landscape presented the perfect space for hypebeasts to fill. Fairfax was gritty and depressed, rent was cheap.

The boutique, Brooklyn Projects, located on Melrose and Fairfax, was the first to open in Los Angeles in 2002. Supreme, a streetwear brand that began in New York in 1994, opened its doors down the block in 2004. The Hundreds, a synonymous brand, in 2007. By my last count, there are some 20 of these stores on the three blocks of Fairfax, While these hype brands have ruled the Avenue for over a decade, Fairfax is now considered “cooler” than ever. There are around five Jewish businesses left.

In recent years, Fairfax has been deemed the “Rodeo Drive of Streetwear.” But I think this pronouncement is limiting. Fairfax is the new Rodeo Drive. Clothing stores like Supreme are not to be underestimated: recently, the Carlyle Group invested $500 million for a stake in the company. Little over a month ago, its founder James Jebbia won a CFDA (Council of Fashion Designers of America) award for menswear, beating out traditional high fashion brands. This made a statement: they have to be taken seriously. What we’re seeing on Fairfax is not kitsch, nor is it a fad — it is the expression of a new generation of outfitters, many of them founded on the street. Sneakers have entered the realm of outright luxury, as shoe partnerships between Supreme and Louis Vuitton sell for upwards of 3000 dollars.

A walk down Fairfax reveals lines wrapped around the block at each store, where mostly young men wait for the newest “drops” of clothing. Jewish stores act, at best, as a backdrop for this privileged luxury. Equally so, commemorations of the “old” Fairfax have popped up on several clothing brand websites, as a sort of homage — or eulogy — to the past: “The history of the Fairfax District before the streetwear takeover,” a headline on The Hundreds’s website reads. By trivializing a past in this way, these stores are ultimately able to minimize their role in supplanting a former identity.

The displacement of this historic Jewish community, who can no longer afford the current landscape of Fairfax, has persisted. In 1980, 37 percent of residents were above 65 years old. By 2010, it was 10 percent. Government intervention, like the Ellis Act which allows landlords to evict tenants from rental units, has aided in this process. Even if they wanted to stay, many Jews are finding it increasingly difficult to do so. The community that I knew and loved growing up is disappearing.

But I am wary to simply call these people gentrifiers. They are, in a sense, selling $300 sneakers on a street that could historically not afford such prices. But they have carved out a culture in their own right. There is a certain air of community and respect that has developed on the street. Fairfax has what’s missing from most changing neighborhoods in Los Angeles: its new residents are in touch with the environment around them; customers as much they are owners.

A walk down the street reveals the pulsating energy at hand, where old Jews, young skaters, and artists share the street. Fairfax in 2018 is abuzz with the same foot-traffic I imagine it had in the 50s and 60s.

No longer does the street shut down for major Jewish holidays as it did before “takeover”, but the semblance of Jewish life is present. Many landlords are of the tribe, and new residents, however knowingly, pay homage to the Jewish society that once controlled the street. At Jon and Vinny’s, a restaurant on the strip, chefs use lentils and tahini sourced from Sami Makolet (an Israeli grocer), kaiser rolls from Schwartz Bakery. Even young Orthodox individuals are shopping at these skatewear shops, creating a generation wholly influenced by Fairfax’s transition. For Jewish businesses still in operation, the mixing of culture has been good for profits and in many cases has kept their business — and their history — alive.

It’s eclectic, to say the least. Canter’s Deli has adapted by offering fusions of traditional Jewish dishes (think avocado schmear). New development, retail, and dining has brought reinvigorated life to the street, creating a unique fissure of culture for an only-in-L.A. kind of identity. The loss of Jewish culture manifests explicitly — klezmer music replaced by Kendrick — but the terms of community still exists.

Those who now call Fairfax home are young, collectively diverse, and have an amalgam of identities stitched together by the street itself. Really, it’s not sneakers that bond them — it’s Fairfax.

I don’t think I see this is as the destruction of a once-vibrant shtetl. It is merely a transition for a new generation. A community is meant to grow and augment, as the Los Angeles Jews demonstrate throughout their history. There is nothing wrong with passing the baton on.

Maybe there’s no need to be so sentimental. Maybe Fairfax doesn’t need to be “saved” from anything. Dealing with city planning through a nostalgic lens is detrimental.To unabashedly paraphrase Proust, reality is filtered by memories. And Fairfax, realistically, was already a fractured space. Viewing this new generation as evildoers, only exacerbating gentrification, does not do any good. Who knows what Fairfax would be without this community?

This is all to say that I never really knew the Warsaw-copy shtetl I pictured in my mind. I am a product of the Avenue’s hodgepodge way; all of its oddities shape who I am. Sure, I’ve eaten many plates of Canter’s Deli chopped liver, but I have also eaten the immaculate paté at the Fairfax restaurant, Animal.

And maybe that’s the point. 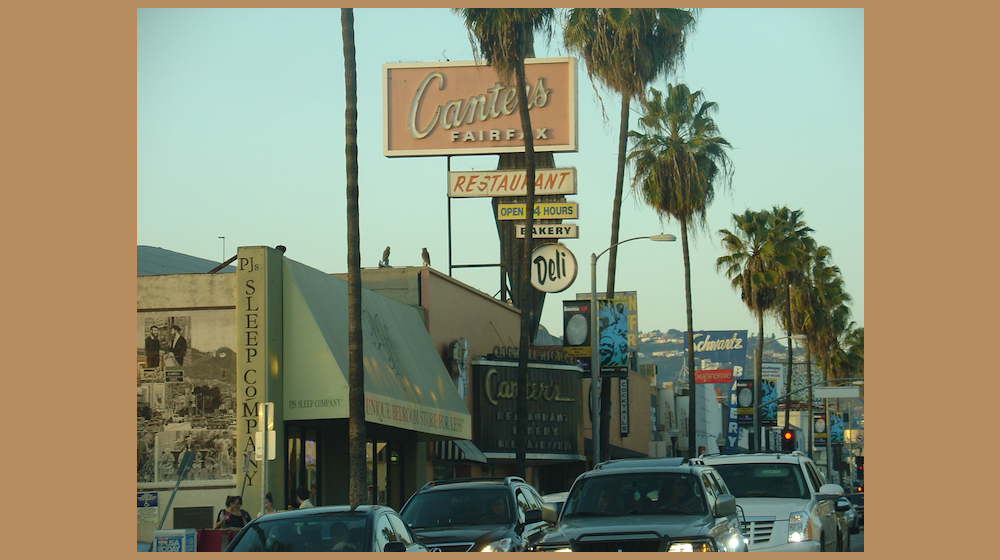