Edith Wharton’s Ethan Frome is a tragedy, almost unendurably poignant, about a thwarted double suicide, which ensures purgatory-like suffering for its participants. I first read the short novel as a junior in high school, and it scared me. It’s a grim New England horror show — puritanism, repression, and stoic endurance — more ghastly than that other high school English favorite, Nathaniel Hawthorne’s The Scarlet Letter.

What stayed with me since high school was the fateful sled ride in the anesthetic snowy landscape, a sneaky metaphor for dangerous, thrilling sex, alluded to in the beginning of the novel as the “smash-up.” The sled ride was foreshadowed throughout the story before its climactic (pun intended) reveal. (As a notable aside, according to Urban Dictionary, “smash” is now slang, meaning: “to f–ck someone really good.”)

A male engineer travels to the Dickensian-named Starkfield, recognizing in the limping Frome the “ruin of a man,” and unfolds the “smash-up” tale through his interactions with Frome via commentaries and stories.  As these tales are told, Wharton deftly demonstrates how culture and circumstances trap people.

What little we know or understand about Zenobia Frome and her young cousin, Mattie Silver, who revolve around Ethan, is vague, as the final stinging, ironic commentary from Mrs. Hale validates: “… I don’t see’s there’s much difference between the Fromes up at the farm and the Fromes down in the graveyard: ‘cept that down there they’re all quiet, and the women have got to hold their tongues.” It’s not like the women who are alive — Zeena and Mattie especially — get to be gregarious truth-tellers, either.

Zeena’s an income-sucking, hypochondriac killjoy, seven years older than her husband’s 28 years, though “she was already an old woman.” Ethan probably married her out of guilt: after all, she’d taken care of his dying mom. Zeena has “asthmatic breathing,” she wraps her hair in “yellow flannel,” and she keeps  her false teeth in a cup on the bedside table. Later, she’s reading a book (Ethan paid extra postage for its delivery) called Kidney Troubles and Their Cure.

Mattie sells her piano for 50 bucks to travel to Starkfield, so she can become Zeena’s caretaker, since there are no other viable options, now that her parents have died and left her destitute. What she lacks in domesticity skills, she makes up for by being Zeena’s opposite.

Ethan falls for Mattie almost instantaneously, and she him, their connection providing flickers of joy in an otherwise joyless existence, love the sole respite. Frome’s excitement comes in no small part from the magic of intimacy, how “he could show her things and tell her things, and taste the bliss of feeling that all he imparted left long reverberations and echoes he could wake at will.” He’s a caretaker, duty-bound: his parents, the farm, his ghoulish wife. He’d loved college, but: “His father’s death, and the misfortunes surrounding it, had put a premature end to Ethan’s studies; but though they had not gone far enough to be of practical use they had fed his fancy and made him aware of huge cloudy meanings behind the daily face of things.”

Marital duty is also a hard foe, personified by Zeena’s cat, Puss, who gets between Ethan and Mattie while Zeena’s away, as if her stand-in, sitting in her place at the dinner table, and finally, inevitably, breaking an irreplaceable pickle dish, a wedding gift, no less. I love that Wharton chose the unglamorous pickle dish, and that it echoes an earlier scene, where Zeena hands Mattie an empty medicine bottle, having sucked out its last dregs, stating, “‘If you can get the taste out it’ll do for pickles.’” (In the margin, I wrote: YUCK.)

I can’t help but wonder if Zeena, who is at times comically abhorrent, represents Wharton’s disgust for her own husband. It’s possible to imagine the misery of Wharton’s marriage, alongside the short-lived, but blissed-out affair she’d had with the caddish, bisexual American journalist, Morton Fullerton, whom she’d met in 1907. In many ways, Wharton was a traditionalist, who believed strongly in marital fidelity, and she wrote the novel at the heels of her short-lived relationship with Fullerton. Like Ethan and his women, she was suffering, trapped, and her situation must’ve felt impossible. By the time the novel was published in 1911, she and Fullerton had been broken up for three years. A few years later, after a 28-year slog, she finally divorced her husband. That fleeting, charged triangulation — one relationship duty-bound and relentlessly awful, the other passionate but emotionally treacherous — no doubt played into her telling of Ethan Frome. Fullerton was charismatic, menacing, and he came with all sorts of baggage: during his relationship with Wharton, his former mistress was blackmailing him over love letters sent to him by his friend, Lord Gower.

Wharton also claimed to have written the original version of the story in French as an exercise, and to have “talked the tale over page by page” with the lawyer and diplomat Walter Berry who was her lifelong friend and another unrequited love, though her relationship with Berry was more weighted and complicated. Berry, Wharton stated, “exacted a higher standard in economy of expression, in purity of language, in the avoidance of the hackneyed and precious.” The language and the theme of Ethan Frome needed to be treated “starkly and summarily.”

Fullerton was dangerous, and he didn’t reciprocate Wharton’s love, but he awakened her sexuality and uninhibited passions can be frightening. Ethan and Mattie’s fatefully doomed sled ride resembles passionate, reckless sex — the kind they had denied themselves previously. “Her breath in his neck sent him shuddering,” and he “leaned back and drew her mouth to his…” Then “her blood seemed to be in his veins.” But Zeena’s face flashes, “with twisted monstrous lineaments,” causing Ethan to flinch, the sled swerving. He rights it, driving down on the “black projecting mass. There was a last instant when the air shot past him like millions of fiery wires…”

It’s not until later that the startling revelation came: had Ethan not insisted on sitting in the front of the sled, most likely to take the brunt of the collision, duty-bound yet again, convincing Mattie by saying he wants to “‘feel you holding me,’” he might have been able to navigate more accurately, thus achieving their original intention, death being the luckier outcome — an escape from reality’s sharp trap. 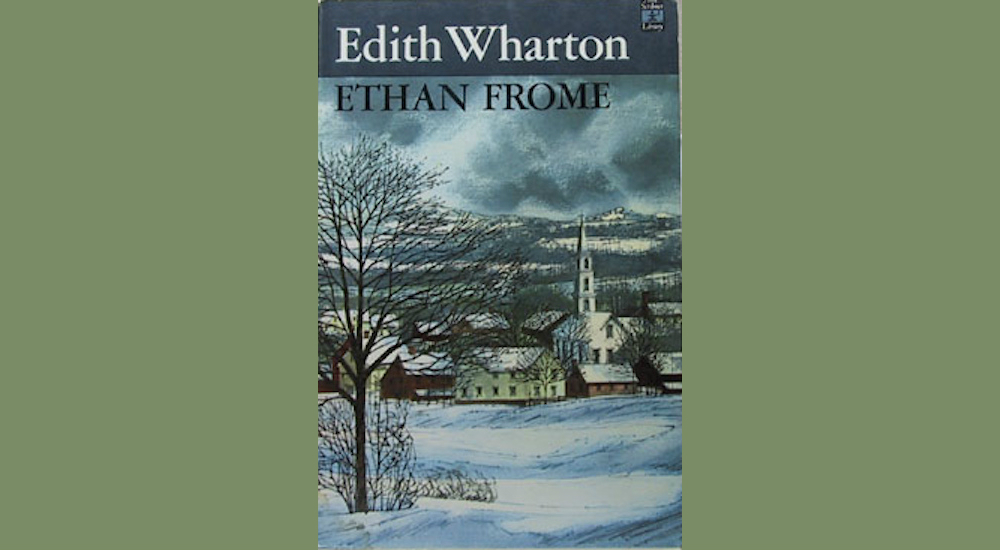