Know thyself. You would have read these two words as you entered the Temple of Apollo at Delphi, if you lived in Greece 2000 years ago. More recently you might have read or watched Alice in Wonderland, in which the Caterpillar asks Alice: “Who are you?” This question has been known to initiate young people on a lifelong journey of self-realization. It is the underlying factor of self-expression, teenage angst, and mid-life crises. This question, this pursuit of identity, is what perpetuates the institutions of religion, other spiritual practices, and all the methods individuals use to connect with an identity beyond temporary designations. In a similar systematic approach, Shadi Yousefian has undergone a journey of self-realization through the ritual of art by dismantling such designations in order to construct a truer form of identity.

Since 2002 Yousefian has produced eight multimedia art series that collectively piece together her identity in all its relevance and contradiction. To honor these past 15 years of extensive work, The Space by Advocartsy in Downtown Los Angeles officially opened its doors on October 8th with an inaugural exhibition that showcases a retrospective of the eight series in their entirety. Founded by Roshi Rahnama, The Space will serve as a platform to host a variety of cultural projects that bring visibility and accessibility to Iranian art and culture. This platform will in many ways communicate Iranian identity, which coincides with fundamental themes in Yousefian’s art. Yousefian further complements the spirit of The Space because she embodies a merger of Iranian and Western culture. She emigrated from Tehran to the United States as a teenager, and later she received formal training in photography at San Francisco State University; she can communicate the nuances of both cultures linguistically, intellectually, and artistically.

For Yousefian, the tumultuous teenage years, when establishing a sense of identity are perhaps most critical, were intensified by the transition into American culture, requiring an adaptation that split her sense of self in two. And though probably not appreciated or realized at the time, this pivotal moment of identity crisis evoked the elements that would later inspire and fuel her art.

Another foundational period was in 2002 when Yousefian created the Self Portraits 1 series that provided the content and techniques that she would repeat and develop for years to come. Yousefian created a technique she coins as “negative collages” that are composed of negative films that have been manipulated by scratching the surface, cutting up the images, reassembling the pieces into a new principle image, and then printing that image for the final product. Self Portraits 1 is comprised of 29 works, many of which deface her image and show the contrast between Yousefian’s Iranian and Western sides. The distortion, the appearance of lips sewn shut or eyes blocked out, the defacement, and the violence in the overall destruction of the images speak to the frustration one might feel when lacking the confidence to speak on the authority of their own voice. However, Yousefian did not just cut up the images, deface, and distort them — she reassembled them and created something complete. The finished artwork displays a newfound confidence and completion.

This series extends into the 2003 sequel Self Portraits 2, which contains the same elements of the first series, but in three large-scale composite sculptures — entitled The Talking Eye, Duality, and Social Identity respectively — that are each formed by multiple photographic prints mounted onto wood panels that collectively form a singular image. The Talking Eye features one face, arranged so there is a mouth in place of each eye and there is an eye in place of the mouth. One face, one eye — a singular vision of identity. In Duality, one body balances two heads in its hands, with one head fashioned in traditional Iranian style and the other in Western style, a dualism in which each party depends on the other. In Social Identity Yousefian’s identity splits into three forms, two of which similar to those in Duality, with an additional plastic Barbie doll-like form with a Yousefian head. This third central plastic persona is a false form, one that has been argued imposes a false standard of beauty on girls. It is yet another layer that divides not just Yousefian, but many women in society by, “Who am I?” versus, “Who am I supposed to be?”

In 2006 Yousefian received her Master’s of Fine Art in Photography. This mastership seems to have expanded her conversation of identity, as demonstrated in Universal Identity (2006). Building upon negative collages and large-scale photographic prints, she adds her viewer to the conversation, putting the spotlight on humanity. Not only do we have perceptions of ourselves, we have perceptions of other people’s identities, and often categorize people according to those identities. These categorical identities are registered with expectations, values, and judgments. Yousefian plays with these categories through the 12 mosaic individuals that compose the series. The pieces are manufactured by contrasting physical characteristics through a process of taking original images of people that ranged in sex, age, and ethnicity, and rearranging their parts into a complete human form. The negative collages were then printed onto canvases and individually hung from rods.

In these works Yousefian draws conclusions to some of the questions raised in her previous series. Whereas in Self Portraits she struggled with the duality of her own identity, her newest work assumes the position that identity is not fixed, nor divided; rather, identity is fluid, mutable, and evolving. In the same year Yousefian calibrated her lens through Examination by creating 16 lightboxes that illuminate images that are similarly constructed as they were in Universal Identity. The lightboxes serve as X-rays for each individual. Whereas the life-size hybrid images of Universal Identity hang like drapes, which symbolically can represent division or concealment, the smaller X-ray boxes allow us to see through the transparent constructs of identity. And unlike Universal Identity, these images are framed by their boxes. When we examine our identity, or another person’s identity, we might ask ourselves how we are framing them.

These concepts from Universal Identity and Examination are again revisited by Yousefian in her Identity Screening (2017) that paints these concepts on 12 two-color silkscreen prints. Aside from the philosophy embedded in the pigment of these works, this act of revisiting a series is subtle, but important, because her revisiting is actually the act of reflection and of remembering. The act of remembering is a creative process that reassembles information from the past that has been encoded and stored in various parts of the brain. The reconstruction of an event mirrors the perception of that event. Three series that reflect this neurological process are in Letters (2006-present), Memories (2012-2014), and Diaries (2017). These three series also continue with the underlying themes of the personal, social, and universal.

Letters is composed of hundreds of pieces from actual letters Yousefian received in correspondence with friends in Iran. Rather than preserving these precious relics of the past, she destroyed their sacred form and transformed them into pieces of art. As an act to preserve the past and her history and culture, she destroyed one form to gather the elements to construct a new form, undergoing an alchemical process of transformation. In an act of creative destruction, Yousefian breaks down these forms to better understand her origin.

In Memories, Yousefian took photos from her personal photo albums and cut out faces and people, removing them from their original context. She then placed them within fabric pouches or small plastic backs and mounted them on wood panels. In the end, she had restructured the order of her memories into a fluid and all-encompassing composition. Whereas before her past self was a collection of asymmetrical memories, they are now presently together with a sense of a whole being. The idea of a memory in regard to “Who I am now,” as opposed to, “Who I used to be,” also creates a sense of dualism. But the reality is our personal evolution does not have any major gaps. Our growth is a fluid line that we can catalogue with phases, but pinpointing exact moments of transformations is difficult, if possible at all.

Diaries (2017) is the third intimate set of works that uses Yousefian’s diary pages that reach back as far as 1995. Following similar techniques as in Letters and Memories, Yousefian deconstructed the pages of her diaries by cutting out the sentences and setting mirror film behind the spaces. The single page was then placed in a plastic sleeve that was mounted on a wood panel with rows of other sleeved pages. There is a subtle play between the artwork and the audience in Diaries. We find ourselves looking at our own reflection as we try to read her diary. Are we not trying to find ourselves in everyone we examine?

The layers of identity that Yousefian surgically cuts into reveals something deeper than surface level. Her process of self-realization is reminiscent of a quote by Nobel Prize Laurette Alexis Carell: “Man cannot remake himself without suffering, for he is both the marble and the sculptor.”

And like Michelangelo freeing the angel with every sharp strike of the chisel, what we see as destruction might very well just be the sculpting that is releasing our divinity. And as we observe from Shadi Yousefian’s 15-year retrospective, the journey of self-realization is both linear and cyclical. But unlike Michelangelo’s masterpieces, our identities are not fixed in forms. The forms that encase our identity transmute over time. And as Yousefian reveals, through examination and reflection one can maintain a constant state of identity. We the audience can use her art as stimuli that prompt similar introspection. Each series, each artwork, is a silent conversation with ourselves and humanity. 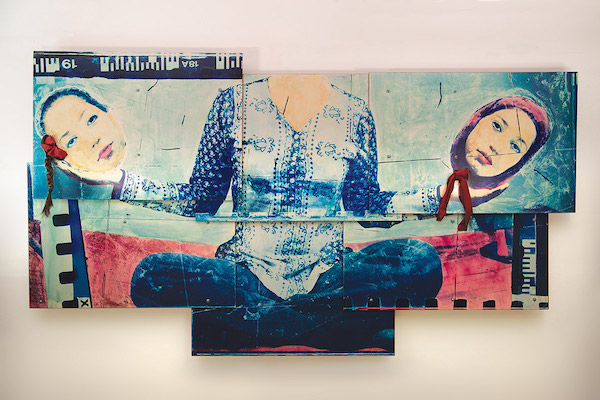