Ahmad Kaddour was born in Tartus, Syria in 1964. He spent most of his childhood with his grandparents in Jableh, a city on the Mediterranean. At the age of 17, he moved to Damascus, where he lived with his brother and went to art school. Later, while reading Walter Benjamin at the École des Beaux-Arts in Paris, he arrived at the guiding principle that masterpieces are fascist.

Ahmad set about creating large paintings he would never finish and silkscreens that, though painstaking to make, would resemble photocopies if it weren’t for their scale and the deep, liquid aspect of the blacks. The silkscreens are often headless bodies. They look abstract, almost topographical and have been hung outdoors in foreign cities like Chicago and Berlin. The pictures insist on the horror of violence by showing it obliquely, as if out of care. They are on display now at the BOA Art Gallery in Beverly Hills through July 30th.

Ahmad Kaddour prints images on war journalism, in hopes that they will improve on it. He first works directly on film, using black paint or India ink. The paint behaves strangely on plastic, pooling and forming the grain that he appreciates. As he scrapes and repaints, the film becomes fragile, so he often transfers the image onto another film to see it fresh. Sometimes, he likes the film so much that he keeps it and calls it art. What he likes about silkscreen is the opportunity to revise continuously, while retaining traces. While I was living in Paris, I often stayed with my friend Ahmad, and his paintings and silkscreens were architecture to me. I became accustomed to his motifs: simple machines, such as bathtubs, beds, wheels and an axis, columns, canoes, a funeral shroud, and figures with round heads, like babies. In the paintings, his figures perform absurd tasks with dignity, like withstand fire or push a wheelbarrow that contains a skull. Ahmad models many of his figures after himself or after images he clips from newspapers and collects. He prefers Le Monde’s broad pages; he finds Libération’s photos of war pruriently gory.

Ahmad lives in a section of Paris’s Fourteenth Arrondissement where history has been disregarded. In the ’60s, its neighborhoods were razed to make way for Montparnasse Tower. I used to make elaborate trips from the distant part of Paris where I lived, the Nineteenth Arrondissement, changing subway lines twice. The length of travel let me feel as though I’d really arrived. It was an act of devotion, or of blackmail. Ahmad, who calls his art works-in-progress, fixates on the distance that separates beginning from end. He talks about process as if it were unseemly to call one’s own job done. Likewise, I have heard him speak elliptically, invoking the emigrant’s right to abstraction. He left Syria in 1987 “because the return was very complicated, was impossible,” he told me recently.

In 2008, he went back. In practical terms, he had become what is called a draft-dodger or dissident, depending on the regime. Friends who had been imprisoned for their politics were now free. His grandmother had died. In 2009, he returned again and spent a few hours with his grandfather, who has since died as well. His parents still live in Tartus. Ahmad speaks carefully about his absence in case it may be taken as abandonment.

Syria has seen much destruction of images that, contrary to the principle in Islam, depict people. “They have destroyed statues of poets,” Ahmad says sadly. He renders bodies as gossamer shrouds as if out of propriety. We look at art about war and ask if prettiness is complicit. The distance he takes from the painful is a kind of politesse.

During the exhibit at BOA, Ahmad is staying with his brother Monzer, who is a doctor in Tarzana and triathlete. Ahmad lives in French, and his English is patchy, and Monzer lives in English, and his French is elementary; together, they speak Arabic. The catalogue includes a letter by Ahmad to Monzer, written bitterly in French, which he terms “the language of exile.” It is addressed to “Manny,” an American nickname that Ahmad never voices out loud, again as if bitterly, as if to chart the distance that has separated them. For a letter, the text is willfully dense, making wide-ranging references, indicating, I think, that it is perilously deeply felt.

I’ve been away from Paris for one year. In French, I might say I’ve “there absented myself.” A silkscreen of Ahmad’s hangs in my New York apartment. Like the others, it dissolves or resolves in the time it takes my eye to fall. 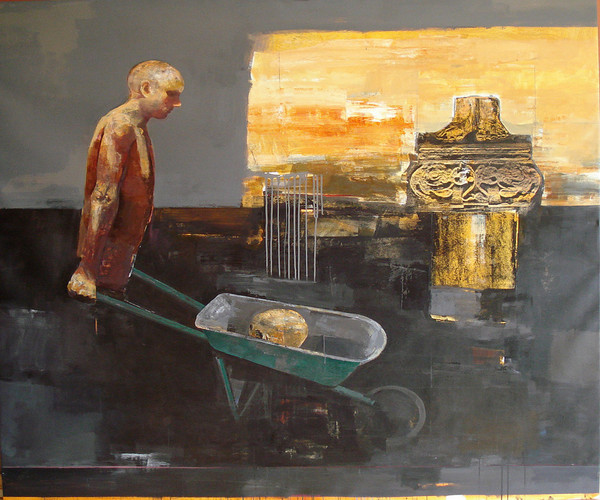