Fifty-two years ago this December, an obscure group of young activists, Students for a Democratic Society, held a national council meeting in New York to discuss the next year’s work.  As I recall there were about forty people present, some of them recent veterans of Freedom Summer, others peace and civil rights activists at campuses such as Swarthmore, Michigan, Chicago, Harvard and Tufts.

I was 18, recently expelled from Reed College in Portland, and a coolie in  the tiny SDS national office running a mimeograph machine and stuffing envelopes.  If it had put to vote, I undoubtedly would have won election from my peers as the most politically naïve and painfully inarticulate member of the fledgling New Left.

Although the intricacies of the National Council debate were largely beyond my grasp, the action agenda was breathtakingly audacious.  SDS was essentially proposing to declare war on LBJ’s war in Vietnam with a march on Washington the following April, while simultaneously recruiting students into long-term urban organizing projects with the hope of catalyzing an inter-racial movement of the poor in the North.   There was also a proposal to expose Wall Street’s role in financing the apartheid regime in South Africa with a sit-in at the Chase Manhattan Bank.

As NC members drifted into the city for the meeting, I asked one of the veterans – that is to say, a 22-year-old – what to expect.  She told me, ‘wait til Tom Hayden speaks.’  He was already a tribal legend: editor of the Michigan Daily,  the principal author of the Port Huron Statement, the victim of a infamous beating in broad daylight in Mississippi, and so on.  I expected a brilliant orator, fire coming out of his nostrils.

In the event he was gruff and dog-tired.  When he finally spoke I was embarrassed because I missed the point he was making, if indeed he was even trying to make a point.  It was more like a long haiku. I had no idea what to make of him.  He was only 26 but struck me as having the manner of a world-weary city desk editor or father confessor twice his age.

There were many leadership styles to emulate in the civil rights movement but it was quiet anti-charisma of Bob Moses — the architect of SNCC’s seemingly suicidal Mississippi project — that most influenced SDS in those last days before its uncontrolled explosion as the biggest radical student movement in American history.  Tom’s charisma was also anti-charismatic, an unrhetorical gravitas tinctured by Irish melancholy and authenticated by his willingness to repeatedly step into the line of fire.

Although he often shared the stage with clowns and bullshit artists, he was always the most serious person on deck and usually the smartest.  He had an acute, almost painful sense of what was at stake in the struggles he fought, of the costs to ordinary lives, of the ever present shadow of homegrown fascism.  Despite the caricatures that will undoubtedly appear in today’s obituaries, he was a sui generis radical, not a liberal, not a social democrat, not a Marxist.

His celebrity and career in the Legislature once upon a time incited much backbiting and calumny amongst the left.  But if anyone has any doubts about the consistent course he steered or his moral toughness and personal courage, they should reflect not just on the Port Huron Statement and the Chicago Seven Trial, but the IndoChina Peace Campaign which kept alive the struggle against American genocide when the rest of the antiwar movement had collapsed.  His crusade to direct American attention and financial aid to the grassroots participants in the Northern Ireland peace process.  His tireless support for the gang truce and an LA peace process when other politicians would not touch the issue.  The list is long and remarkable.

He was a complex, difficult, impassioned person whom we should honor as one of our great champions of peace and justice.  May the circle be unbroken. 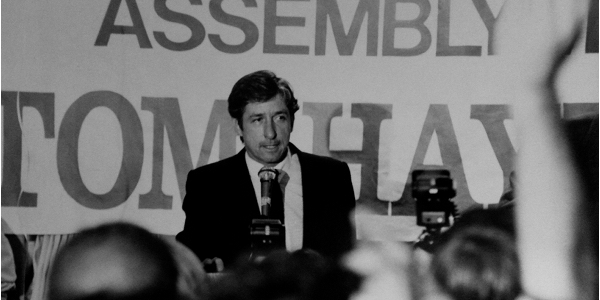