We started Red Hen Press in 1994 with the idea of transforming Los Angeles into a literary city. The City of Angels was the city of movies, the city of movie stars. When I moved here for graduate school, I imagined reading and writing by the beach and swimming in pools and the ocean. I soon realized that, given how hard you have to work just to live in Los Angeles, I would never be rich enough to own a swimming pool, and visiting the ocean is something most of us in Los Angeles do once or twice a year. Instead, I focused on my true passion, to live in a world of books.

Bookstores were the womb of Red Hen Press. When I met Mark, we had four children between us, so every date was at a bookstore. There, we would talk about Kafka, Ray Carver, Lorca, Atwood, Toni Morrison, and Jamaica Kincaid and the dream of starting our own publishing company. We wanted stories about people who lived on fault lines, worked in oil fields and on military bases, the working class, the unknown, the stories we weren’t seeing anywhere else. So, we made a pact to see if we could make Los Angeles more literary by starting a press that would publish work that the big New York publishing houses were ignoring.

I grew up in a cult in Southern New Hampshire that my mother had joined in the early sixties. I lived there for fifteen years and finally escaped at 18 with two dollars, a dog on a baling twine string, and a sleeping bag. Mark had lived on his own since he was 14. We’d both slept in cars and were willing to drink adrenaline for breakfast. We were willing to work seven days a week, 52 weeks a year. And work we did, raising our kids with no television, no video games, and chickens in the backyard. There were always books to read, card games to play, and chickens to chase. We were idealistic indie publishers, willing to take a walk on the wild side.

When we fell in love and started the press, we had no money; Mark sold his car and his furniture to fund our first printings. In the early years, we started with poetry, and three years in we decided to publish prose as well. At first, most of the prose we took was risky, but Mark and I were hard-wired for risk. Other publishers might have created a carefully designed business plan, might have had a focus group for each book, but doing that would have given us the same books everyone else was publishing. We were looking for the next Kafka, the next Toni Morrison. In 2003, when we published Chris Abani’s first American book, we felt we were on our way.

Soon, the little red hen grew too big for our backyard, and six years after we published Abani, we moved the office to Pasadena where we were in a small brown house in the Vroman’s parking lot. We had a board, staff, and a space, and all the overhead costs that keep such operations going. The two biggest expenses for a nonprofit literary press are printing and payroll, and only about half of the income for a literary nonprofit comes from sales. The rest is up to fundraising and grant writing. Seven years into the press, Mark quit his full-time engineering job to be a full-time publisher. Until two years ago, in my “spare time” around full-time teaching undergraduate students at Cal State Dominguez Hills, I also worked full-time hours at Red Hen, cultivated donors, did the editing, dropped the galleys in New York, and worked international foreign rights fairs, burning through my health points like a child blowing the candles out on a birthday cake. 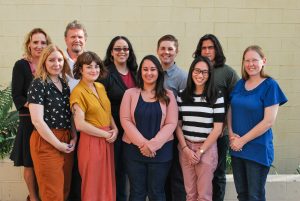 I used to say that Red Hen was for people like us with dirty boots, people who worked hard to build community. Los Angeles is a sprawling city divided by freeways and distance. To make change in the city, we felt that we needed to do more than just publish books: we needed to have awards, events, and community building opportunities in different parts of the city for different audiences.

In 1998, we started the Benjamin Saltman Poetry Award, which started as a $1,000 award and has since become a $3,000 award with a four-week residency. Red Hen has expanded to 10 annual contests awarding a total of $12,000 and 6 book publications per year. For many years, we had events at the Ruskin Art Club in the mid-Wilshire area. Now, we curate events internationally, including Los Angeles, San Francisco, New York, and the UK. In LA, we have readings in Pasadena and Santa Monica at Boston Court, The Broad Stage, The Annenberg Community Beach House as well as at our own new event space, The Hen House Literary Center. Bookstores — a literary community’s lifeblood — give us a third place, somewhere to go and find ideas all around us. We frequent independent bookstores around the country, and locally focus on Vroman’s Bookstore, Book Soup, Skylight Books, Diesel Bookstore, and Flintridge Bookstore & Coffeehouse — all bookstores beloved by the literary community. We tell our authors to start the promotion of their book by planning their book tour at the best indie bookstores they can find, because if the tastemaker bookstores fall in love with your book, it’s like having the gods smile on you. In 2003, Red Hen started our Writing in the Schools Program, teaching poetry to over four-thousand underserved students in Los Angeles schools and providing them with poetry textbooks and their own anthologies at no cost to the students or the schools.

This year, we are celebrating 25 years of publishing. We have published three books by Chris Abani, five by Percival Everett. We’ve published Erica Jong, Douglas Kearney, Camille Dungy, Peggy Shumaker, and Ellen Meeropol. In the spring, we have novels by Kristen Millares Young, Aimee Liu, and Donna Hemans, and a nonfiction book by Rebecca McClanahan. We have a new book coming out with Martha Cooley. Our authors are engaged with events throughout the country. The quality and caliber of books we receive every day is staggering, and we are honored by the authors who entrust us with their work. We strive to make each book a work of art.

Red Hen Press is now in a splendid permanent space in Pasadena thanks to the generosity of Joe Usibelli and Peggy Shumaker. Our space was formerly a church, so it has a full community space, and in that space, we have had poetry readings, chamber opera, jazz performances, community theatre, and revolving art shows. Our offices are flexible, with private spaces for people who like to work alone and collective spaces for those who enjoy working in groups.

Red Hen continues to publish work and authors being ignored by larger presses. We are still looking for slanted, strange stories through general submissions and our eight imprints and publishing series. I started with my own excitement for lesbian authors, publishing writers like Judy Grahn and Eloise Klein Healy (editor of our lesbian imprint, Arktoi Books), but once we hired Tobi Harper, our queer editor and curator, we started an LGBTQ series, Quill, that publishes one title a year through an award. Since then, the number of LGBTQ titles sent to the press through general submissions has increased, just as they did when we started the Letras Latinas/Red Hen poetry series curated in partnership with Francisco Aragón of the University of Notre Dame. Through Letras Latinas, we publish a second or third book of poetry by a Latinx author every other year.

Red Hen has a fantastic staff and board, and we are honored by the support of the Pasadena and Los Angeles community who attend our annual literary Benefit. This year’s Benefit is at Noor in Pasadena on October 27th from 11 a.m. to 2 p.m. where we are celebrating thriving for twenty-five years in Los Angeles. The four keynote speakers for this year’s Benefit are all Red Hen authors: Steve Almond, Elizabeth Bradfield, Percival Everett, and Erica Jong.

According to The New York Times, books are making the “comeback of the century.” People who come home from a day of staring at their computer screens want to switch gears to the leisure activity of the page rather than continuing to stare at a screen, and they’re looking for stories they haven’t read before. Book sales are on the rise because independent book publishing is thriving. We are publishing new stories by and for those who are underrepresented by mainstream publishing. The artifact of the book has thrived, and bookstores are thriving with it. It’s a good time to be an indie publisher.

Red Hen started with hard work and moved toward a great story. Eva Saulitis, a whale scientist and Red Hen author, wrote in Becoming Earth, “I felt myself move out from my body, expand out of my personal story.” As readers, we yearn to feel that, and as publishers, we seek to make it happen. We live in perilous times, in times when we need to be awakened more than ever. Books wake us to ideas, to new ways of thinking, to stories that move us out of our comfort zones. Books allow us to dream differently, to act differently, to change the world we live in.

Red Hen Press is proud to be part of transforming Los Angeles into a literary city. We are no longer just a city of movies; we are a city of books. Our story felt small, but our dreams were big. Now, our readers are many, our space is large, and the Western sky is full of possibilities. 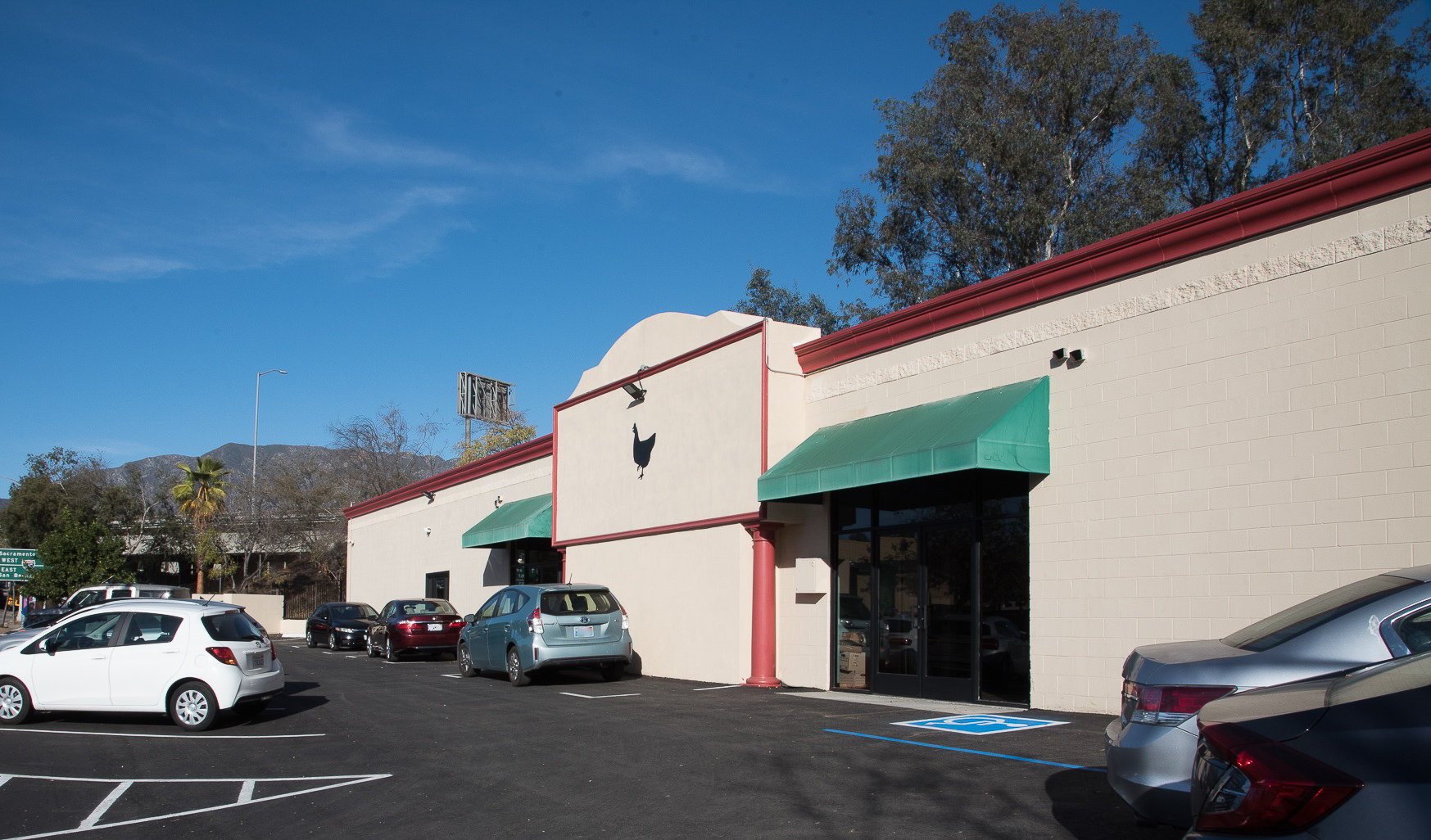