Like many, I spent part of the last weekend in January at an airport. Across the country thousands protested detainments in the wake of Donald Trump’s executive order, signed on Friday, January 27th, banning refugees from seven countries. Being at an airport without travel plans, in an atmosphere of kindness and community distantly removed from the usual airport experience, brought to mind another airport I went to — not through — not long ago that has been transformed into its opposite. Tempelhof, once the world’s most noble aerodrome, then a Nazi stronghold, now a public park, was also slated two weeks ago to become the largest refugee camp in Germany. So I wondered, surrounded at LAX by supportive sign-bearers chanting welcome slogans, contemplating Tempelhof: how do places change and heal, and can people — individuals and populations — follow suit?

Travel is important to me. Travel — making and sustaining contact with all kinds of different people and places — likely saved my life. In 2008, when I learned Tempelhof would be shut down, I felt a genuine sense of loss: it was the only airport I had ever truly loved.

Modern airports resemble modern jails and modern hospitals. Their founding claims of efficiency and safety obliterate local and historical particularities, leaving airports soulless, homes only to intervals to be endured prior to boarding. Unlike hospitals and jails, no one “ends up” in an airport. Not destinations, LAX and DFW and JFK are purposeless in themselves as well as separate from what surrounds them in both space and time. They are the quintessential non-places, what the philosopher Marc Augé terms the “immense parentheses” that seem if anything to loom larger by the day.

To kill the intervals we spend at airports, we pace or wander, or sit and disconnect by putting in our headphones. This is a double disconnection, since already in airports we, too, are cut off from our surroundings, cast out of our routines and preferences, consuming foods we wouldn’t normally, paying prices we would never pay. We drink at hours likely to embarrass us in real life, linger over magazines that offer us advice on cars and skin concerns and hobbies we don’t have, updates on celebrities we haven’t heard of and can’t care about.

Absolutely artificial, airports can be conducive to fictions as we hypothesize about where other people might be going and what they might be doing there. The moral of these stories tends to be that other people’s lives and travels are more interesting or more fulfilling than our own. The airport’s isolation, meanwhile, creates an illusion of release from the constraints of citizenship, compounded by our anticipation of flights that will soar over—rendering invisible—the boundaries between states and nations.

All sorts of therapy have now been introduced at different airports to help us cope with the strangeness and estrangedness of our experience while there. Heathrow has gradually expanded its program of soothing scents that now permeate multiple terminals. Many airports play soothing music; rare is the major airport that does not offer massage. In December, San Francisco International acquired a therapy pig.

Some people don’t need airport therapy. But I do find being inside airports similar to suffering from mild depression, a faint but noticeable echo of the roar that deafened me in college. Except for Tempelhof.

When I was 16 I tried to kill myself. I started college early, at 15, and by my suicide attempt I had been living on my own for just over a year in a dorm in the middle of fraternity row. My dorm, known as the Honors House, had also been a frat house, but when a pledge was killed during a hazing rite, the university rebaptized it, and students on academic scholarships, like me, moved in.

It was a strange and dangerous place for me to be: having been homeschooled, I had little idea how to interact with my new neighbors, who seemed eager to interact with me. They tried opening me up with alcohol that came in cascades. I had never tasted alcohol before; now I drank whatever I was offered in an effort to overcome my shyness. I had never talked to boys before; now I was harassed, and eventually assaulted.

Although I was aware of the existence of services like counseling, I would have been ashamed to seek them out. In the middle of my freshman year, my mother got a new job, and my family moved without me to a different state. Too timid to discuss my mental health with the few friends I’d made, even after drinking, I turned further inward. I tried to find my way back to the intellectual shelters I’d carved out for myself in the past — in the flux and soundness of language, in foreign words I’d learned — but by now these refuges were inaccessible. Depression, combined with alcohol, had subsumed my brain.

Hard-working and hard on myself, I came to feel I served no purpose: I couldn’t even think. I had dwindled into nothing — into a non-thing, a non-person — and could no longer imagine anything outside of me. There was no other time. There was no world. So I took what I believed to be the sole remaining course of action: pills I’d stolen, vodka I’d been given, the box cutter I had borrowed from the photo lab.

I nearly died. But then I didn’t. And as time passed, I began to discover the world.

Like so many places — and unlike non-places — Tempelhof has lived a lot of different lives. It stands on land that once belonged to the Knights Templar (hence its name); it became a Prussian parade ground. There is scant record of its adventures in the six centuries that intervened between these human uses; I imagine bison, spruce bark beetles, hedgehogs, storks. Storms that split the sky with light and tiny yellow flowers that popped up from softened soil.

It became an airport. When at last I got a Fulbright for translation and began to travel, my earliest itineraries took me in and out of Tempelhof, which to me, an Oklahoman with no more exposure to the world than a handful of family vacations to Kansas and Nebraska, was Wonderland. I would arrive early on purpose and be dazzled every time. People’s shadows flickered on the polished floors; these gliding silhouettes would sometimes intermingle like the languages I didn’t know or didn’t know completely yet, which rose and fell in flurries. In all of this activity, in all these intersections, in all these mysteries, I sensed the nearness of the world’s quickening pulse.

I was not the only one to form a strong attachment. The announcement of its closure met with dismay on the part of many Berliners, as well as visitors like me. Yet with the expansion of competing city airports Schönefeld and Tegel, authorities could hardly help but question the wisdom of continuing to dedicate so much valuable, central space to a crumbling terminal with a conflicted past.

Redesigned as Nazi stronghold in 1937, Tempelhof had also hosted the life-saving American airlifts to Berlin during the Soviet blockade after the war, when aid planes bringing desperately needed food and supplies landed up to every ninety seconds. To some Tempelhof felt like a safe haven, a harbinger of plenty; to others, Tempelhof was a decaying SS artifact, a headache, an eyesore and a waste of 950 urban acres. To me, it was both, but it was also neither, in the sense that it was already becoming something else.

Languages are precise about different things. In some languages the words for “scar” and “heal” are one, as in Spanish (a language already under siege by the new administration, although an estimated 40 million native Spanish-speakers currently live in the United States): “cicatrizar.” According to the Real Academia Española, cicatrizar means “for a wound to finish healing so that it’s fully closed.” No mention is made in this definition of the mark that may remain after this process of closure is completed, though “cicatriz” is the name in Spanish for that mark.

Yet there are also lots of unmarked camps and killing fields in Central Europe. Overgrown with weeds and trees, inhabited by owls and doves, these sites may or may not reveal the traces of their traumas. This poses a challenge to the human residents of nearby towns and cities. As Polish scholar Roma Sendyka asks: “What are we to do, here in this part of Europe, as we enter onto ‘non-sites of memory,’ theoretically unlivable, but in practice so shamelessly alive?”

The debates over what to do with Tempelhof have been intricate and drawn-out. Reopened as a park called Tempelhofer Freheit — Tempelhof Freedom — in 2010, its runways were quickly overtaken by bicycles with brimming baskets, the asphalt itself burst through by stalks and blossoms, the once-white lines that guided planes now green, glittering when struck by sunshine. On my recent visit I lounged in the obliging grass between the former runways and watched kites and picnic blankets flutter, butterflies flicker in patches of shade cast by the fluffy clouds. Snippets of a play being rehearsed off in the distance reached me intermittently with the slight breeze that also brought me wafts of bread and cheese from a family’s wicker basket.

My college dorm remained for me a haunted frat house, site of the accidental murder of a kid who could just as easily have been me. But I experienced Tempelhof Freedom as pure happiness, its shameless vitality a source of unadulterated joy. Nonetheless I know that before being rebuilt as fascist emblem in 1938, Tempelhof housed one of Germany’s first concentration camps, where hundreds of political activists and suspected homosexuals were held and tortured.

Sendyka asks instead of positing. I go back to my initial question: how do places change and heal, and can people — individuals and populations — follow suit?

When I think now — 20 years later — of my depression, it feels unreal, or as though it happened to another person whose memories I overheard. Like anyone, I’ve changed. I hope I’ve grown. Through travel, through therapy in Spanish while I lived in Buenos Aires and thanks to the unflagging support of friends and mentors and boyfriends and even sympathy from strangers sometimes, I have come a very long way. But who knows if we as people ever fully heal? If you look close enough, you can still see scars on the insides of my wrists.

Andrew Solomon has called depression the absence of vitality. For me, it was vitality with no outlet. Depression was a non-place, vacuum packed to seal out space and time. Like the long layover that gets extended and extended by conditions or mechanical problems never satisfyingly explained, until after a while you can’t even remember why you’re going where you’re going. Until finally your very destination slips your mind.

Conditions for the refugees at Tempelhof will not be ideal. They will be cramped, and there will be no privacy. It will stink inside the former terminal. But Germany, with a quarter of our population and a twenty-eighth of our land, has accepted 360,000 refugees from Syria alone, while we admitted 14,000 under Obama and are now committed to welcoming zero going forward.

The United States is not a non-place. We are not depressed — we’re outraged. We must all fight now to remember where we want to go. We have to head towards sanity and decency. We must recover love and logic.

It will be hard to stay a course of action. The routes we’ll take will likely change repeatedly before we get there. There can be no doubt that vast chasms, difficult to navigate, divide our country now like so many open wounds. The question that remains for me is: will these wounds — can these wounds — cicatrizar? 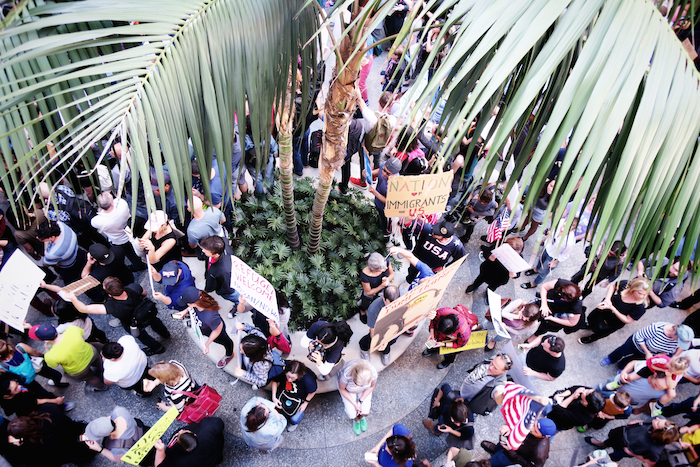