When Donald Trump designated the Iranian Revolutionary Guard a terrorist organization this spring, a move that has led to talk of a new war in the Middle East, he described Iran as an “outlaw” regime that endangered American lives. When he declared a national emergency on the southern border, he imagined an “invasion” of drugs, human traffickers, criminals, and gang members from Mexico and Central America. When he signed the first of his travel bans, he warned that Muslim immigrant and refugee communities harbored “the very threats our soldiers are fighting overseas.” When a federal judge blocked the second, the president bemoaned that political correctness had “left our people defenseless.”

I am not a racist, Trump insists. I am defending the nation.

The 45th president has broken precedent after precedent in his short time in office. This is not one of them.

Since the Truman administration dissolved the Department of War and replaced it with a Department of Defense in the early years of the Cold War, our presidents — Republican and Democrat, conservative and liberal — have used the idea of defense to mask a hard-to-ignore fact: the United States has looked to black, brown, and Asian countries to imagine invasions and define enemies. It has fought wars in East Asia, Southeast Asia, Central America, East Africa, and the Middle East. It has declared none, because the United States no longer wages war against people; it defends itself against communism, crime, totalitarianism, and terrorism. Or so we’re told.

Trump may be less subtle than his predecessors, but he is far from the first president to turn war against dark-skinned people into defense against beliefs and behaviors. The idea of defense came with the office.

In his 1947 State of the Union address, the first broadcast on television, Harry Truman announced his plan to form “a single Department of National Defense.” He wanted to cut costs and coordinate the branches of the armed forces, but he also wanted to win influence in decolonizing Asia and Africa. So did the Soviet Union. “National security does not consist only of an army, a navy, and an air force,” the president told Congress. The nation cannot be safe until “our cherished ideals” are “spread over the whole earth.” Later that year, Truman signed the National Security Act, establishing the National Military Establishment. Two years later, his government renamed it the Department of Defense. It didn’t cut costs.

In 1950, after sending tens of thousands of soldiers, marines, sailors, and airmen to the Korean Peninsula without a declaration of war, Truman addressed the American people on the “situation in Korea.” The president avoided calling it a war and avoided referring to the people living in the north as Koreans. He used the word “defense” fourteen times and “communist” thirteen. Truman’s logic ran in a circle. The conflict in Korea couldn’t be a war because North Korea had committed an act of “lawless aggression,” attacking the US-backed South across the thirty-eighth parallel, and the act couldn’t be lawful because the conflict in Korea wasn’t a war.

The president’s obfuscation hid his real conclusion: North Korea could never engage in war because it wasn’t a nation comprised of people but a vessel for a wrongheaded belief. It didn’t deserve to defend itself. The president cast North Koreans as less than human, and he did it without reference to skin color. He did it with the idea of defense.

President Lyndon Johnson declared a “war on poverty” in 1964 and a “war against crime” in 1965 but continued to describe the Vietnam War as a “bitter defense of freedom,” a non-war. His successor, Richard Nixon, took presidential doublespeak to a whole new level, telling a reporter in 1969 that he considered “the Department of Defense to be a ‘Department of Peace.’” The language of defense allowed Johnson and Nixon to duck Congress, from which a constitutional declaration of war must originate, but it also gave them the means to delegitimize their enemies in Vietnam, to treat them as unlawful, outside the “human” of human rights. Their administrations couldn’t have done the same in a European war.

The racial politics of defense divide Americans, too. Few understood this better than Huey Newton. He and Bobby Seale founded the Black Panther Party for Self-Defense — the full, original name — in 1966, with Newton serving as the Panthers’ minister of defense. He and Seale included “self-defense” in the name, Newton explained in 1970, because defense belonged not to the government but to oppressed people: “When we used the words ‘self-defense,’ it also meant defending ourselves against poor medical care, against unemployment, against poor housing and all the other things that poor and oppressed people of the world suffer.”

Our government has too often used the idea of defense to create and reinforce racial divisions within and outside the United States. But perhaps, as Newton suggested, defense could mean something else. It could mean accessible medical care, good jobs, and safe housing.

There is violence worth defending against, of course. But our unwillingness to reflect on the racial politics of national defense has left us vulnerable to overlooking threats from people we deem white, including, most of all, our own.

When a new president moves into the White House and tells us we must act in the name of defense, we should first ask what we’re asking now: Who are we defending? And from whom?

Joseph Darda is an assistant professor of English and comparative race and ethnic studies at Texas Christian University and the author of Empire of Defense: Race and the Cultural Politics of Permanent War (University of Chicago Press, 2019). 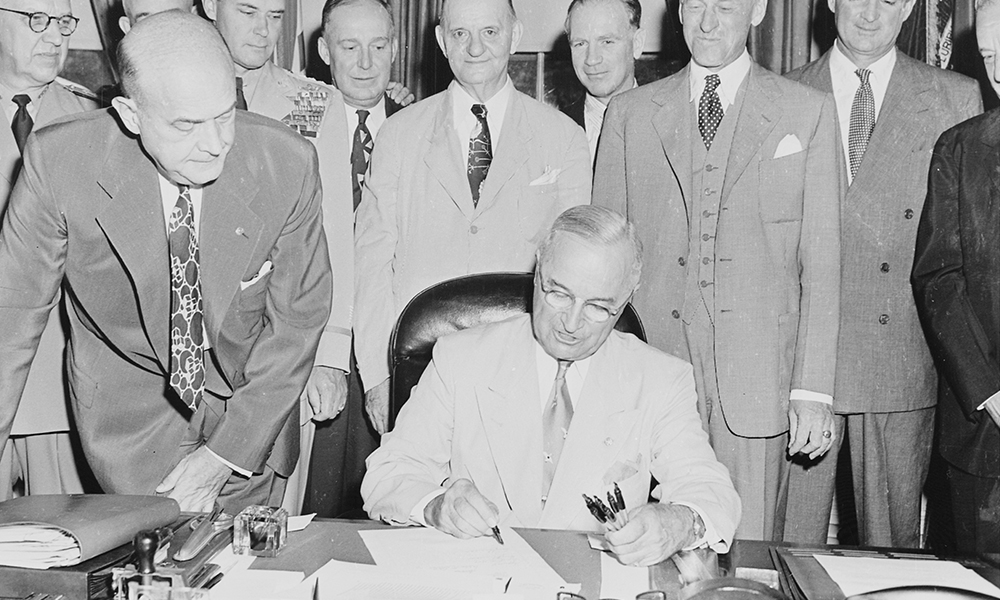