“The past is never dead,” Faulkner reminded us. “It’s not even past.” The old man might have been writing of World War II; after all, it’s been eight long decades since the Allies crushed the Axis, but the conflict’s heroes and villains — Churchill, FDR, Hitler, Stalin; MacArthur, Tojo, Zhukov, Göring; Blackshirts, La Résistance, and all the rest — still fire our collective imagination. Maybe that helps explain why a US Senator tweeting a head-scratching quote from a fascist numskull like Mussolini so readily sparked thoughts of another WWII-era crap-weasel: Vidkun Quisling.

For those who might not recall, or perhaps have never heard of him, Quisling was a Norwegian politician who headed the collaborationist government in Nazi-occupied Norway in the 1940s. After the war, he was tried, found guilty of treason, and executed.

Rather than reliably fading into d-bag oblivion, however, Quisling lived on — in ignominy. Today, the word “quisling” denotes a politician who serves an occupying power at the expense of his or her own country’s interests, and as the Times of London pointed out in the early days of that long-ago war, for those who love charting the course of languages the term is “a gift from the gods.”

“If [writers] had been ordered to invent a new word for traitor,” the Times noted in April 1940, “they could hardly have hit upon a more brilliant combination of letters. Aurally it contrives to suggest something at once slippery and tortuous. Visually it has the supreme merit of beginning with a Q … a crooked, uncertain, slightly disreputable letter, suggestive of the questionable, the querulous, the quavering of quaking quagmires, of quibbles and quarrels, of queasiness, quackery, qualms…”

You get the drift.

Flash forward 80 years, to the nauseating spectacle of Republicans in both houses of Congress — public servants who swore an oath to “support and defend the Constitution of the United States against all enemies, foreign and domestic” — ignoring an American president’s pathological duplicity, his fondness for dictators, and his open disdain for the rule of law.

Witness grown men and women zigzag, simper, and dither as a demagogue tightens his hold on their party; as he lies, every day, about issues great and small; as he obstructs justice in plain sight; as he undercuts America’s prestige in the eyes of our allies and, more perilously, in the eyes of those who would do us harm; as he professes his admiration for the heads of avowedly hostile foreign states; and as he illustrates, again and again, that he is not a president of all the people, but a megalomaniac who revels in the adoration of conspiracy peddlers, white supremacists, the ultra-rich, and an angry, aggrieved base that feels threatened by pretty much every aspect of 21st-century American life.

Even taking into account the inept toadies, accomplished kleptocrats, and fringe-right creeps that fill his White House, Donald Trump remains, in essence, an occupying force of one: a pretender whose presidency will always be tainted by Kremlin meddling, on his behalf, in the 2016 election.

Now, in the most blatant instance yet of his contempt for — or, to be fair, perhaps just his ignorance of — the laws governing the world’s oldest democracy, Trump has falsely declared an emergency on America’s southern border, and has stated plans to pay for his asinine, long-promised wall with funds that Congress has appropriated for other purposes. Meanwhile, scores of national security experts have observed that “under no plausible assessment of the evidence is there a national emergency today … at the southern border.”

In other words, Trump is again lying. But this time, his bone-deep dishonesty is doing violence to the Constitution itself.

Republicans have a chance here to show their quality, and by and large they are doing just that — by rolling over, waving their manicured paws in the air, and letting Trump have his way. Despite the political, legal, and constitutional stakes involved in the border-emergency declaration, few Republicans have voiced their intention to fight the president’s outrageous power grab. Even for a party as craven as today’s GOP, this abdication of its duty to serve as a check on executive-branch overreach is breathtaking.

Of course, plenty of Republicans have turned a blind eye to (and even occasionally cheered on) Trump’s vilification of the press, his twitter rants against “rats” who cooperate with law enforcement, and his repeated attacks on the justice system itself. But now Republicans appear willing to relinquish Congress’ singular constitutional perk, the power of the purse, because … well, because Trump says so.

No one who has been paying attention to the president’s dark circus for the past two years will be astonished by any of this. Winking at Trump’s divisive language and waving off his unhinged narcissism, the GOP has only emboldened a silver-spoon reprobate who has always lived by a simple creed: Rules are for suckers.

And yes, okay, some Republicans in the House and the Senate do seem to have managed to retain vestiges of both their spines and their principles in the Trump Age. And yes, absolutely, Democrats have problems of their own, ranging from first-time House members wallowing in anti-Semitic tropes to an enormous field of 2020 presidential candidates that, at this point — despite the quality and experience of so many of the potential nominees — has something of a clown-car vibe.

But even in the face of those and other caveats, the central questions remain. Why do so many in the GOP remain in lock-step with a bullying, race-baiting Mussolini wannabe? And when will most Republicans stand up and acknowledge what a significant majority of men, women, and children, and quite a few of America’s smarter pets, have long known: namely, that Donald Trump is a con man, a thug, a cheat, and — as a weak-kneed BFF to murderous autocrats everywhere — a clear and enduring threat to America’s national security.

I don’t have answers. But in the words of Trump’s sad-eyed lawyer of the lowlifes, Michael Cohen, I have my suspicions. While many Republicans are privately uncomfortable with the incompetence and corruption that define Trump’s administration, they’re terrified of speaking out and drawing his ire. Others seem to genuinely share Trump’s xenophobic, isolationist, Know Nothing sensibility and are energized, rather than appalled, by his hateful rhetoric and his demonizing of the weakest among us.

But no matter the reasons for their acquiescence, it’s clear that the GOP is in thrall to a man manifestly unworthy of loyalty.

In light of all this, and with particular elected officials and far-right media gasbags in mind, I propose that a new collective noun, “a quiver of quislings,” be added to the language, where it might join other playfully descriptive phrases — a leap of leopards; a skulk of foxes; an exaltation of larks.

I realize there’s no guarantee that a quiver of quislings will catch on. But I like to think it has a certain querulous, quavering, quaking ring to it. Know what I mean?

Photo of Vidkun Quisling via Wikimedia 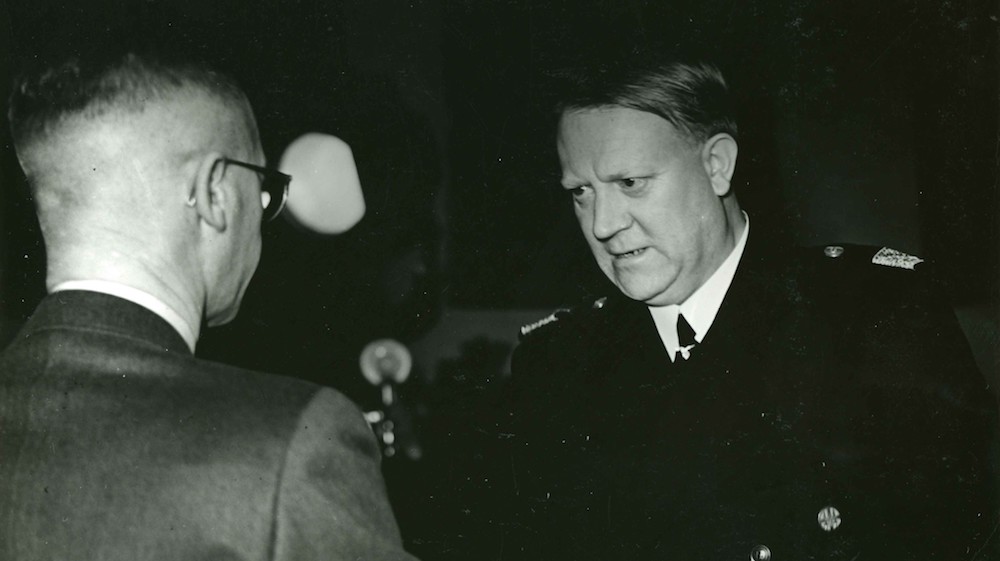