indifference to a famous library. Venerable and calm, with all its

treasures safe locked within its breast, it sleeps complacently and

will, so far as I am concerned, so sleep for ever.

The building has reawoken. The lights are switched on. In an upstairs room lined from floor to ceiling with crammed bookcases, things are anything but calm. Three display cases are rapidly filling up with books and manuscripts — all of them works by women. Two colleagues and I anxiously measure their dimensions to make sure they’ll accommodate an immense vellum contract with a wax seal depicting Elizabeth I and a Gwendolyn Brooks broadside. We debate the most strategic placement of an iPad loaded with biographies of even more women and their works, a message that our exhibit is just the tip of the iceberg.

That’s how I imagined it happening several months ago, when I approached two fellow PhD students — both, like me, women who specialize in female writers — with the idea of co-curating an exhibition on “500 Years of Women Authors, Self-Authorizing” at Harvard’s rare books and manuscripts repository at the Houghton Library. Stepping over the threshold that Woolf rejected in disillusionment was exactly what I had in mind. But now, as the COVID-19 pandemic compels museums to shut down their onsite operations indefinitely, the project of giving women a room of their own has, quite literally, got to be done while we are unable to access the exhibition room.

We, at least, have been locked out only temporarily and for a good reason. But, somewhat ironically, the emergency closure of the Houghton has transferred the labor of curating and designing a room for women to the same space in which Woolf herself experienced it: the imagination. From our respective rooms in three different locations along the east coast, we have overcome the physical impossibilities the quarantine presents by stealing into our coveted exhibit room in our minds’ eyes. Endless Zoom meetings are devoted to walking through the space in words. The locked library is haunted by our hopes. Ghosts can come from the future too.

When curating women writers under quarantine, one’s present is intensely haunted by both the future and the past. One morning, I laid three sheets of blank paper across my breakfast table and spent several hours arranging and re-arranging grainy black-and-white thumbnails of books on these makeshift, two-dimensional display cases. I carefully laid down a photo I took several months ago of a late-15th-century edition of Saint Jerome’s Vitas Patrum recently acquired by the Houghton. This book — a hagiographical work written by a man, printed by another man, and quite literally about the “fathers” of monasticism — bears an owner’s signature on its title page in scarlet ink: “Johanna”. I squinted down at the woman’s name, printed in grayscale and shrunk down to a size small enough to fit easily into my palm. Who were you? I silently demanded.

“One knows nothing detailed, nothing perfectly true and substantial about her. History scarcely mentions her,” Woolf replied.

That’s not entirely true. History is a series of conscious choices, but even if people choose — as they have for so long — to forget women’s achievements, that doesn’t make those achievements unknowable. The fact that Woolf lived in a world where the unavailability of women’s histories was so complete that it gave rise her conviction of their nonexistence means that these histories must be vigorously excavated if we are to change the world. And, more than that, we have to redefine what exists. Nearly a century later, that work is still just beginning. As three female literary historians curating an exhibit on women, the library as an institution — as an engine of historical decision-making — can no longer be impassive to our existence. We are creating the world Woolf dreamed of, but couldn’t believe in.

But the quarantine has also intensified and ironized Woolf’s demand. While so many museums and libraries have adroitly transitioned to virtual exhibits, the stakes of having a physical room for this particular exhibit have risen. If the Houghton reopens by next spring, the “room of our own” will be the library’s Amy Lowell Room, an exhibition space named after a poet few would recognize, and with whose work even fewer would be familiar today. Lowell, who was awarded a Pulitzer Prize posthumously in 1926, also made a generous bequest of money, as well as the largest private collection of books and manuscripts related to John Keats, to the Harvard Library upon her death in 1925. It was her philanthropy, not the almost simultaneous recognition of her own literary merit, which ultimately carved out a space for her at Harvard.

But can we say that it’s her own, this room populated by Lowell’s personal collection of books and manuscripts — many of them by women — and volumes purchased with her monetary gift? Has a woman really earned a room of her own simply because it has been named after her and filled with her possessions when history has largely shut its door to her? Under these circumstances, a room of one’s own is a memorial which embodies forgetfulness.

It is also an opportunity to remember.

Like Lowell, the women who will feature in the exhibit have done the work of self-authorization, only to fall through the gaps in collective memory. They were often famous, even infamous, in their own times. Still, how many readers today know about the scandalous splash Lady Mary Wroth made at the court of James I with her autobiographical prose fiction, or Agnes and Maria Catlow’s nineteenth-century contributions to botany and zoology, or Edna St. Vincent Millay’s sonnets, called “the best of the century” by Poet Laureate Richard Wilbur? With the margin for discovery so wide, the status of “unknown” has an ironic power to reverse itself when cast as a tangible reality, a physical space a viewer can walk into. When so many of history’s scarce mentions get together, it’s pretty astonishing how memorable a roomful of forgotten women can be.

Still, the overwhelming grain of history makes one point eminently clear: three women curating an exhibit about women at one of the world’s foremost research libraries doesn’t mean that our culture has suddenly decided to get woke after a multi-millennial slumber. On its own, it’s just a blink. Curating women at a distance is, in part, a lesson in the ways that the men who once monopolized the power to choose how history was told distanced it from these very women — the same men who, in the past, shut fast the library door, excluding women from those decisions while subjecting them to their effects. This is no longer the case. Now, we are playing out the sequel to Woolf’s words. What happens after women get a room of their own? If we quarantine them within it, temporarily safeguarding them from a culture which pathologically excludes them, only to release them back into this same culture, we are only fooling ourselves that things are changing. Something more has to happen. The cure lies in our own patterns of thinking.

The goal of programs like our exhibit on women’s authorship should be for visitors to walk away with a new hunger as well as new knowledge. And we have to make a concerted effort to feed that hunger by filling in the female-shaped gaps in history. My greatest ambition for this exhibit is that it will catalyze and contribute to this movement. When, if all goes to plan, we return to our very own room in the Houghton and I glance at the first edition of A Room of One’s Own carefully positioned in its display case, I hope it will be with the knowledge that this book is now bearing witness to the opening of a new door. 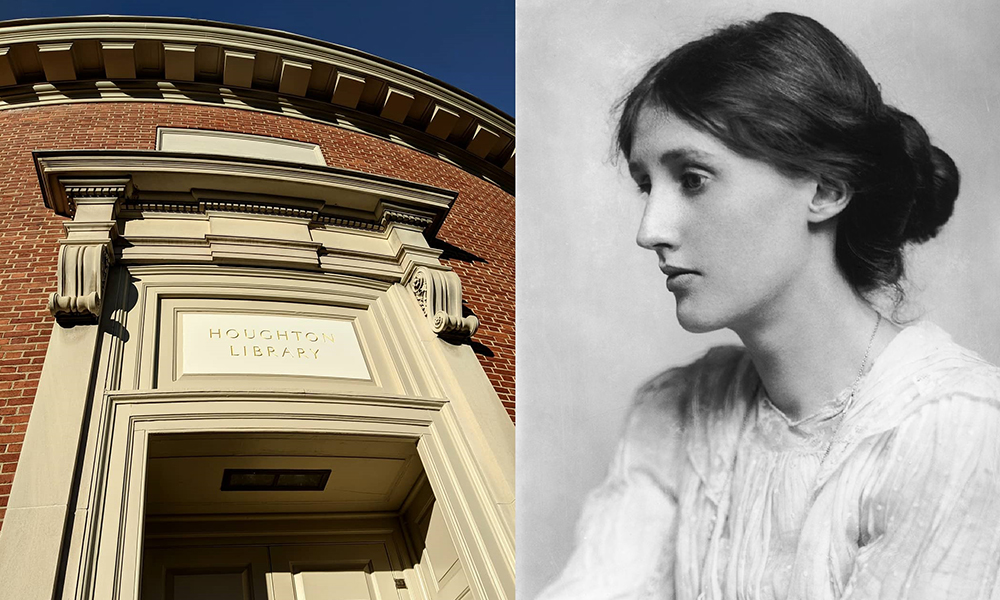