By Ani Kokobobo and Emma Lieber

Putin has all the best words! You might want to learn Russian, or you can listen to Donald Trump, who sounds like Putin lite, with all the bluster, but none of the polysyllabic words, or actual power (not yet, anyway). Although he has thankfully spared the American public the shirtless parading of masculine bravado, whenever not chained to a teleprompter by his handlers, Mr. Trump seems to be aping authoritarian language, crafting an image of himself as a strong authoritarian leader, a doer who will build walls and destroy ISIS, someone who should be in charge simply because he says so. In this sense Trump’s dismissal of his own vulgarity, the testimonies of the women accusing him of sexual assault, or Hillary Clinton’s entire political career as “just words” is (like most of his claims) perfectly disingenuous, since Trump knows the power of words better than anyone.  And though Trump may be running for president of the United States, he hardly ever sounds like someone seeking to be the leader of a constitutional democracy with checks and balances. Of all the authoritarian figures that he has praised in the course of his campaign (including, yes, Saddam Hussein), the smooth talking Mr. Putin is the favorite.

Language has played a fundamental role in the construction of both Trump’s and Putin’s political careers, and in fact, a basic cross-comparison of their respective uses of language provides important insights about the linguistic arrangement of authoritarianism. But though some similarities arise, Trump’s rhetoric is more aggressive in its claim to be the speech of power. Living in a democracy, Trump’s authoritarianism can only be a linguistic construct, and it takes on a level of hysteria and urgency that is perhaps absent in Putin’s language. In this sense, Mr. Trump’s aggressive rhetoric makes him sound like an authoritarian manqué.

Russia has a long history of vesting language with the power to change the face of social reality by fiat, as Russian leaders have manipulated its potential as a political tool. As Mikhail Epstein has written about the Soviet propaganda machine, “ideology did not lie, but simply recreated the world in its own image and likeness.”[1] When the Bolsheviks came to power, just as during the French Revolution centuries earlier, they transformed language, developing an authoritative state discourse that wielded the power, among other things, to diminish the humanity of certain politically undesirable characters, practically reducing them “to a zoological state.”[2] This animalization of political enemies was begun by Lenin himself, who frequently referred to such people as “harmful insects,” “lice,” “scorpions,” or “bloodsuckers”[3]; and the practices continued during Stalin’s show trials, when political enemies were referred to as “rabid,” “mad dogs,” or “miserable hybrids of foxes and pigs.”[4] And this insulting language was, of course, just one of the ways in which rhetoric was used to confer political status and create social reality in the Soviet Union, in which access to the power of language was simultaneously centralized and limited to those already in power—since certainly, lice and pigs don’t speak.

Having come into power after the collapse of the Soviet Union, and at a time when Russians were tired of empty ideological jargon, Putin’s manipulation of language is more subtle than but ultimately as insistent as that of his predecessors. As Michael Gorham argues, Putin’s speech is versatile and operates on many registers. Putin often sounds like an eloquent, knowledgeable technocrat; at other times, he privileges deeds over words by either touting his accomplishments or promising violent retribution to terrorists;[5] at times he woos his audience by playing the part of the charming suitor, such as in his recent letter for International Women’s Day, in which he declared women to be the incarnation of Russia’s true soul. Both because his words are supported by the might of the Russian military arsenal, and as a result of his control of all media outlets, it is hard to envision a competing discourse that could challenge Mr. Putin’s claims.

It is perhaps no surprise that one of the tools in Mr. Putin’s versatile linguistic arsenal is a type of speech that overtly seeks to be larger than speech itself. British philosopher J. L. Austin, who has discussed the power of language to change social reality, calls this kind of utterance “performative speech.”  In simplest terms, unlike descriptive language, performative speech “does things with words”: it carries out an action by speaking.[6] Performative speech often (though not always) assumes that the speaker holds a particular social position that enables her words to act immediately on the world. A justice of the peace can pronounce two people married; a captain can christen a boat; congress can declare war. Whether it is in the form of special professional status or a governmental or executive role, in these instances a certain infrastructure must be in place to ensure the performativity of language. Otherwise, the speech acts at one’s disposal are on the order of a promise, which is created at the very moment of its uttering but which guarantees nothing—and elections can only traffic in promises.

In his speeches, though, Putin can often do a great deal more than promise because he can capitalize on his extensive executive power. For instance, following his invasion of Crimea in 2014, he referred to the people of Crimea and Sevastopol as “citizens of Russia,” thus seemingly instantaneously integrating them into the Russian Federation.[7] Of course, everyone knew that it would require organizational efforts to actually naturalize these people.  But Putin had already done the work of annexing those areas, and his performative speech then followed through on his controversial acts. Unlike in Mr. Trump’s case, it was the power that sanctioned the language and not the other way around.

In some respects, Trump had tremendous illocutionary power before his run for president, while serving as the star of his reality television show “The Apprentice.”  His famous one-liner on that show (“You’re fired!”), which instantiated in its utterance the removal of a contestant from the show, is a perfect example of performative speech. Donald Trump’s presidential campaign similarly bears the mark of the ambition, brought to fruition in “you’re fired,” of wedding words to deeds. In a way, all of his statements, including his campaign slogan, “Make America Great Again!”, aspire to this register.  His wildly unfounded claims; his declaration that he will “knock the h*ll out of ISIS” without any particular plan to do so; his bleak portraits of urban America; his superlative language (everything is the “biggest,” the “most,” or is done, in an odd neologism, “bigly”) — all of these uses of speech seek to shape or recast reality with very few and only very vague plans for action behind them.

Yet all of these utterances belie their foundational premise, since ultimately, outside of his reality TV fiefdom, there are rather few truly illocutionary utterances at Trump’s disposal.  “Make America Great Again!” does not, logically, hold the power of “You’re fired.” Rather than enacting something at the moment of utterance, it merely doles out future responsibility. In fact, it seems unclear in the slogan who will be doing the work of making America great over the next four or eight years—surely not Mr. Trump himself.  (This in fact is the irony of Trump’s position, since for all of his rhetoric, it is perfectly unclear whether he has any interest in actually doing the work of holding office.) The same is true of the subject-less “Lock Her Up!” and “Execute Her!,” phrases bandied around by Mr. Trump and his supporters alike that ultimately betray, linguistically and otherwise, only their own impotence (who exactly will be enacting these deeds?).

As one scholar has argued, by gaining control of Russia’s mass media, Putin has essentially turned the public discourse and public life in Russia into a garden-variety reality TV show, of which he is the director and star.[8]  Given the nature of American media coverage, this election has certainly become a reality television show in its own right, in part as a result of Trump’s activities. But to Trump’s apparent frustration, the nature of our democracy and the “rigged” media means that political leaders cannot do things with words in the same way – or, rather, that others can always come in to modify, moderate, or reshape speech acts.  In other words, “US Elections 2016” is not a show that Mr. Trump is ultimately in control of, or that affords his speech the same level of performative power. For instance, by questioning the legitimacy of the US elections system (in other words, in attempting to deny Americans their own potential speech act, in the form of the vote), Trump only raised more doubts about himself. Certainly, he could not, with one word, naturalize all the Mexican Americans of this country as Mr. Putin was able to do in his Crimea speech (nor of course would he ever dream of doing such a thing). And talking about it, does not, in fact, build a wall. The President of Mexico can talk back and say that he won’t be paying for anything at all.  “Star” may be an anagram for “tsar,” but the similarities remain on the linguistic level.

Nor for that matter is Trump even as well-spoken as Putin.  As Putin knows all too well, authoritarianism takes both the best words and a lot of work.  Perhaps this is why Trump wants to create Trump TV, in which his words and his perspective have the ultimate authority: authoritarianism without the hassle. Currently a small-scale operation running out of Facebook Live, Trump’s dabbling in television could grow into the next Fox News, but bigger, the biggest.  But it will never be as big as Russia.

Ultimately, this use of language seeks to require no other support beyond itself, without its speaker having created the scaffolding that would promote his speech to the status of actually “doing things with words.” And, in American democracy, the one at the top is not the only one who can exercise his voice.  Ultimately, in this arena, all Trump is left with in terms of performative power are insults, which can be hurtful, but which require the agreement of their target audience to take effect as speech acts. To Austin, a speech act in which something goes awry (a promise that I have uttered but that I don’t follow through on, for example), is not “untrue” — since this status would be reserved for descriptive language — but is rather “infelicitous.”[9]  In other words if the object of an insult refuses to be insulted, that speech act is rendered infelicitous.  Nicknames like “Lying Ted,” “Crooked Hillary,” or “Miss Piggy” may aspire to reduce opponents to a sort of zoological state, but in America, they are also, to quote Hamlet, just “words, words, words.”

Ani Kokobobo is Assistant Professor and Director of Graduate Studies in the Department of Slavic Languages and Literatures at the University of Kansas where she teaches Russian literature and culture. Last summer, she published an edited volume: Russian Writers and the Fin de Siècle – The Twilight of Realism (Cambridge University Press, 2015). She has a monograph forthcoming, Russian Grotesque Realism: The Great Reforms and Gentry Decline (Ohio State University Press, 2017), as well as another edited volume, Beyond Moscow: Reading Russia’s Regional Identities and Initiatives (Routledge, 2017). 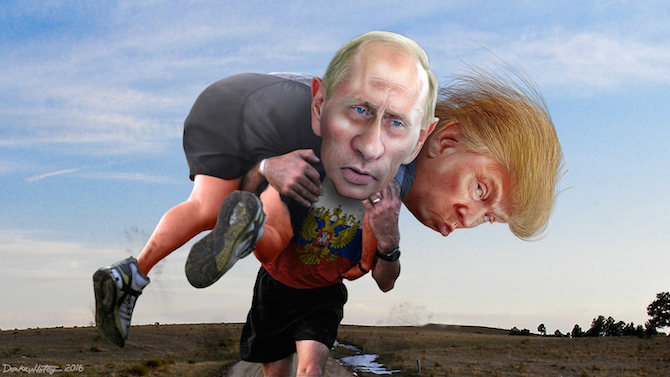