Our astute new President got his priorities absolutely right on his first day in office, even before he John Hancocked his first executive order. He hung gold drapes behind his desk in the Oval Office. They matched his tremendous hair. To a T.

The scene was really really beautiful. The cameras rolled and proved how in a single, inaugural image he fit right into the office, camera-ready. Gold on gold, yellow on yellow, it was fabulous, contrary to what all the nasty people had said about his unsuitability for the office. He matched, even as hundreds of thousands of chanting Women’s March protesters thronged the city on Saturday — whom he could have seen out the back on the Ellipse if he just parted the golden curtains. He didn’t. Too much reality can spoil your hair. Nasty, politically correct people anyway, none any prettier than a 3 or 4, tops. As for the suit itself, President Trump was already on it (i.e., the suit he was wearing, not his lawsuits): dark blue works bigly against gold, with the added plus that the depthless color disappears pork belly, even rolling wads of it. How presidential!

Not to be bragadocious about it, but he slam-dunked the whole day, so just forget about the 2s and 3s outside. Didn’t happen. No Tweet, no event. The important thing is that the room flattered him like an obsequious adjective sucking up to a big, fat noun. Hail to our new decorator in chief!

That overrated so-called painter Andy Warhol once knocked the future President Trump (so unfair) for not liking the silkscreens he did of Trump Tower: the colors didn’t match. True. They didn’t, and above all the President likes things to match.  His two sons match, what with their Wall Street power hair do’s and identical glassy stares (they’re unfairly called Tweedle Dum and Tweedle Dumber by the nasty, stupid press, the opposition). And the women in the family who circle around him on stage match too, identical wives and daughters, Barbie Xeroxes all, maybe because of a family Botox discount at their shared plastic surgeon. It was actually the country’s first Botox Inauguration. Amazing! All 10s, except for the augumented Ivanka: 12. Is the plastic surgeon suing for nonpayment like all those stiffed contractors? Doesn’t he know that it’s a privilege to work for the Trumps?

The most-watched-ever Inauguration was all the more terrific because Melania matched Jackie Kennedy in understated elegance, or tried to, even if you couldn’t quite erase from your mind’s eye, or the internet, those classy “art” shots of Melania wearing only a balloon, if that. Funny how those photos gave everybody x-ray vision so you could see right through the tasteful clothes. But whatever she’s wearing, or not, she’ll make a lovely First Lady (just don’t bring up those dishonest photographs), especially when she’s wearing those spray-on dresses while escorting frumpy first ladies around the golf clubs. Of course Melania had already paid Michelle, another class act like Jackie, the ultimate compliment during her speech at the Republican Convention by matching Michelle’s own convention address word for word. Beautiful!

Trump made his reputation in real estate in serial bankruptcies, so for those boring losers like Elizabeth Warren who worry that the White House is now at risk, that it’s in the hands of a low-life, crooked money grubber, get over it: he has plenty of experience as a decorator. That’s his expertise: decoration. Surfaces. Terrific shiny things, like his foreign-made ties. From the very beginning he figured it all out. He punctuated his real estate product with shiny metal built-in accessories — brass door trim, brass door knobs, brass plaques — and carpeted his lobbies every which way in flesh-toned, skin-flattering marble: it’s what Louis XIV would have built had he had the loans. Doesn’t matter that Trump skimped on the rest of the building: only boring critics who aren’t rich anyway and write fake news for failing publications notice the cheap, stress-warped glass facades. Morons. Sad.

After the shiny brass, Trump soon outdid himself, graduating to gold-plated faucets and fixtures on the bidets and toilets  (not real gold, of course). He spent his splash where it counted, in the foreground, something you could grab if your hands weren’t already otherwise occupied, gleaming things that polished his own reputation to a T. He was branding himself into a walking, talking Ritz, only glitzy.  $=T.

Trump’s penthouse would make that hugely overrated king Louis XIV blush in his dumpy palace. The penthouse has got so much gold you can tan yourself off the reflected rays just by sitting in the living room. On the ceilings, on the furniture, in the powder room, every square inch is gilded. Never mind that the ceilings are squat and the rooms have the proportions of a motel. Only losers would notice that.

But if the decor isn’t overpowering enough, if it doesn’t make you whimper, there’s the blinding Melania herself, so often photographed as a drape, on the piano, on the couch, and on the bed of course, waiting with that subtle I’m-sooo-ready pucker on her lips and a squint in her eyes, probably because she needs sunglasses in all the glare.

Human drapery:  how very clever! How fabulous! But how do you pour that into a T-shaped bottle and market it? And given Trump’s art of the pre-nuptial, the human drapery probably isn’t costing all that much, as we know from the previous on-his-arm wife-drape, Marla Maples, who got only $2 million out of the deal when he wanted to change the décor and close the curtains on the marriage. Trump is tough and women are weak — it’s a zero sum game — especially when he buys them and parks them as trophies in the splendor of his ego. You would think they’re Muslim since they never talk much when he’s around, and are always walking a respectful three paces behind him.

Unfortunately, even as he was decorating his towers, the golden boy from Queens was losing his hair and going gray to boot. He maxed out his triplex, piling it on according to his first and last rule of decorating — “More is more” — but was having to make do with less and less hair. So sad. He took matters into his own stubby fingers and designed himself himself, and in a magic trick as least as good as pulling a wig out of a hat, a flap of hair suddenly appeared on his thinning scalp, at the front. Each strand mattered, so he grew it long to maximize coverage with an innovative comb-over thrusting forward, then suddenly back at the last moment. Not a strand wasted. How very original! Blow-drying it into a nimbus helped. Volume. So did Elvis’s ducktail, a great model for a haircut, sides swooshing back to a fin like a ’55 Chevy. No doubt about it, Trump’s hair is his best architectural construction; tacky, of course, but the least tacky.

Now he might just issue an executive order to reverse the ban on aerosol hairspray. It would be really helpful to allow canned lacquer to hold the golden fleece in place because it tends to fall of its own weight, or blow away in an updraft on the tarmac (unless he’s wearing a baseball cap). Who cares if aerosol depletes the ozone levels? Morons care. The scientists always get it wrong anyway.

Of course, when you dye your hair, it can be any color you want, especially if you’re going to be a winner power president. So Trump’s new hair color could be different from the mousy brownish hair he was wearing when he was escorting around town his first drapely wife, Ivanna. He went for an upgrade to gold  (just don’t call it orange: he’s very sensitive). He didn’t want to go all the way and do finger extensions as part of a full-body make-over, but decided only to emulate that crooked Andy Warhol himself, even if that tremendously overrated artists was totally out of control: Warhol wore an outrageous flyaway platinum-colored wig to change the subject from the fact that he was bald. Brilliant! A faked fake! With Trump, now you don’t really look at the fingers, not even for a sneak peak, because you can’t stop staring at the hair, trying to figure out how he manages that cantilever in the front and the back, coming and going, without aerosol.

That might be good diversionary political strategy, too: do something really, really stupid over here, while you slip something even more stupid but important by over there. TV-addled Americans don’t have the attention span to notice. BTW, if that investigation into the Russian connection ever gets going, watch out: his hair might fall like a soufflé.

If anyone says that all that gold is sad and only hides the insecurities of a weak man with remarkably short toes, don’t worry. Much better that interpretation than those nasty, unfounded rumors carried over from his golden showers in Moscow, news that we all know is fake because the lying opposition press made such a big deal out of it. Besides the statute of limitations on golden showers is up by now anyway. So long ago (but still pretty memorable, you have to admit). The accusation that he was compensating for his insecurities is really much better than thinking, every time you look at Trump in the Oval Office, that those are actually golden shower curtains keeping him dry.

But as a decorator, Trump doesn’t only do brass and gold. No. He’s not so limited. Anything goes when you have that terrific Midas decorating touch. Flare. Flame. Maybe because of the short finger thing, he wants to be associated with big, thick, long columns and likes to be photographed on the portico of his stately golf clubhouse in New Jersey, where he vetted cabinet candidates. The rub-up rubs off on his body image bigly. And now, of course, he’s in the White House, with massive columns galore. More power to him!

His true gift as a decorator is designing for the camera, especially the TV camera, using reality itself as a prop. So when he isn’t tanning himself orange in the sunny glow of his apartment or holding some press thing in the skin-flattering marbled penumbra of Trump atrium (did you ever finally pay the architects, Donald?), he is standing erect next to the Herculean columns of whatever manly portico is handy. No doubt about it, columns are an aphrodisiac. It’s not about architecture: it’s about performance. Never mind that this is plantation architecture that reminds African Americans of the Big House of slavery days. Because those folks didn’t vote for him in the first place anyway. Porticos with Trump in front are huge. They’ve never looked better. Black lives don’t matter so much when the  blue suit looks tremendous, silhouetting and slenderizing our Michelin-Man president against the lily white. Huge.

From the correct angle, and with the right color coordination, the world is his adjective.  Words don’t really matter, they’re more for sissy intellectuals who read the Constitution and the New York Times and the other failing outlets of the chattering classes. TV is the new Constitution: image is what really matters now. And his image is out there more than any Democrat’s. Bigly. Image über alles, as the Nazis used to say and do. TV suits Trump to a T, and besides, he can watch himself later, instead of listening to stupid so-called intelligence briefings. Amazing! Trump is golden! Da! 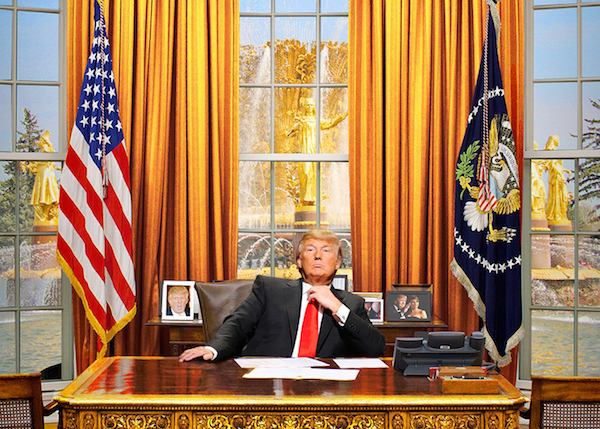