One afternoon in 1884, an elderly one-legged stranger was hired by a general store in Corsicana, Texas to walk a tightrope with an iron stove strapped to his back. The store was new. They sold everything, stoves included, and they wanted to draw all of Corsicana to their grand opening. They promised the afternoon would include an “astounding, astonishing, amazing, unbelievable, never seen before or ever again act of strength, gravity and defiance of common sense.” School was dismissed for the afternoon, crowds swarmed the main street, a band played, and the mayor made a proud speech. Corsicana watched, transfixed, as the Rope Walker inched confidently across the wire. He was practiced and skillful, with a notch carved in his peg leg so the wire fit neatly within.

The problem was that whoever strung the rope didn’t do it properly. For half the walk, it held fine. But it didn’t stay taut. The crowd — schoolchildren, mayor, cheerfully-tooting band — all watched in horror as the wire slackened and sagged. The Rope Walker plummeted, his chest and heart crushed under the massive iron heap. In his last breaths, he asked for a rabbi. If you visit Corsicana, you can see a grave marked simply “Rope Walker” in the Hebrew cemetery.

In the 21st century, we often lament how we are hamstrung by spectacle, trapped in an endless cycle of reality television, Facebook Live, or Tweets du jour. Even objective news events — the James Comey hearings, for example — clog bars and restaurants with viewing parties.

Yet a craving for spectacle has always been a part of the human experience. Romans mobbed the Coliseum to gawk at gladiators. Elizabeth I paraded through palaces with a pet dwarf named Thomasina. At some point, spectacle also became intertwined with punishment, with public displays of guillotines and pillories and heads on stakes. Today, millions of dollars in highway safety grants have been designated to curb rubbernecking, a commonplace example of our relentless impulse to leer at the lives of others.

While our instinct to ogle seems timeless, what has changed is the form of the spectacle. In today’s world, spectacles tend to be bloated by the internet, less likely to be witnessed in person, able — by virtue of technology — to be viewed repeatedly, shared instantaneously, or watched after they occur.

Last February, a model named Viktoria Odintsova Instagrammed herself dangling one-handed from a 73-story skyscraper in Dubai. Odintsova has nearly four million followers — roughly 50 times the capacity of the Coliseum. But her brand of daredevilry is a rare throwback. In contrast to historic spectacle, spectacle today is rarely about physical audacity. More often than not, it comprises social uniqueness, or small putatively private experiences that explode.

Despite these differences, the core elements of spectacle have held constant. Spectacles are public, implausible, attention-capturing, and emotionally evocative. We feel differently when we witness them, even if it is from our iPhones rather than the streets of Corsicana.

We are often conflicted about our voyeuristic itch; conversations about spectacle tend to be tinged with distaste, and a hefty dose of moralizing. The assumption is that collectively gaping at others is a social ill. Yet spectacles have persisted through centuries, in so many different forms, precisely because they fulfill a needed role. Spectacles connect and divide people with each other, reinforcing the essential — and likely evolutionary — need to form groups and to identify ourselves as members of those groups. Because spectacles capture both our attention and emotions, they are exceptionally effective at achieving this goal.

When a celebrity is arrested, or a young child is mauled by a gorilla, or the president Tweets “covfefe” after we have gone to sleep, our hunger for spectacle is awakened. Our reactions draw on a deep conviction of “otherness,” the belief that the person in the arena is different and unlike us in some fundamental way. By reinforcing how we are distinct — from gladiators, conjoined twins, Octomoms, YouTube sensations, celebrities, or politicians — our response to spectacle also tells us as much about the sort of person we are as the sort we aren’t. When we voice disbelief, admiration, grief, or revulsion at a spectacle, we join a broader community, becoming more firmly glued to those who also share our responses.

Without these sorts of group memberships, life would be harder. Thriving hinges on humans bonding with each other, to fulfill basic needs of protection, nurturance, and security. These group memberships are also important for our own identity. Man’s search for meaning doesn’t lie in a Harambe meme — but reactions to spectacle actually play a key role in confirming our sense of self. Observing others spotlights the qualities of our own personalities that are most salient or important. The irony of spectacle, then, is that it is never about the objects of the spectacle. It is always about the viewers. Their needs — not the exhibitionism of the performer — are what make a spectacle tick.

Two millennia ago, the poet Juvenal bluntly stated the people of Rome had exchanged liberty for “bread and circuses.” The same could be said of us in 2017 — or of any people at any time. The desire to observe, to hurl ourselves into the world of another, to understand what connects and separates us, to yield to our curiosity, and to indulge in disbelief: these are intrinsic qualities of humanity. The circus is our bread.

We feed on spectacle, and are surprised, again and again, when it takes us places we may not want to go: when blood from the guillotine soaks Parisian cobblestones; when a comedian poses with a faux severed Trump head; when an elderly man is crushed to death so his employer can sell a spool of thread and a sack of flour. Part of the enchantment of spectacle is the security of being a watcher, and the ease with which we may judge other watchers. But spectacle will inevitably remind us of our humanity — and that by falling prey to its seduction, we are merely being ourselves. 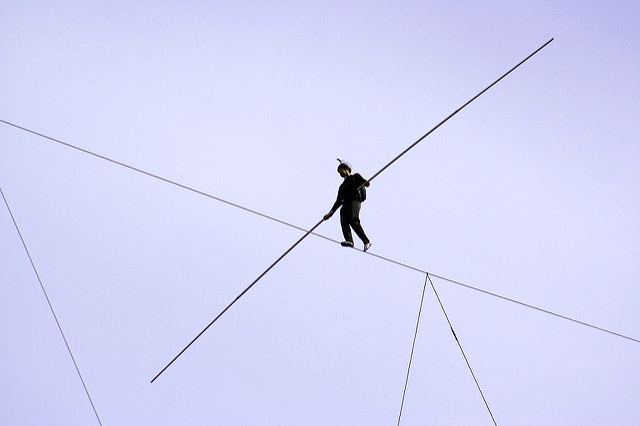