My grandfather was a Rockefeller Republican for most of his life. He served in the Eisenhower administration and was a state representative in Massachusetts for eight years. However, by the time I was old enough to know him, he had retired to New Hampshire, mostly because of the state’s allergies to taxes, and had become an increasingly crankish capital-C conservative. Though he never attended, he started giving to Hillsdale College because it didn’t accept federal funding. He mailed me ridiculous anti-Clinton literature. Something of a proto-Fox News dad, but without the unpleasant bigotry or resentment.

What I remember best about his later years was the multiple sclerosis that bound him to his huge recliner in the bright living room of my grandparents’ condo. Next to him the TV blared cable news, what our grandmother called this his “screaming heads,” which he would watch late into the night. His love of politics was little more than entertainment to him, removed of its urgency and newly able to narcotize him. His last political act was to have his absentee ballot notarized several weeks before the 2000 election. Mercifully, he died before its fiasco.

I was reminded of my grandfather as I wandered the bland, insipid halls of the Pasadena Convention Center in late July. I was there to take in the scene that is Politicon, described by its organizers as the “unconventional political convention” where thousands of people flocked for the same kinds of reasons my grandfather kept cable news on: politics neutered, de-natured, turned into WWE-style sports entertainment and presented for consumption, a kind of passive participation, and reassurance that your side is right.

In the giant entry room, mostly empty by the time I arrived to get my press pass, a table greeted convention-goers with collectible Decision 2016 political trading cards. The woman manning the table encouraged me to look at them and gave me a tired spiel about how each pack was unique, that you never know what each one might hold. An open pack gave you a good guess, though. Duds like Libby Pataki’s “Spouses” card or the “Future Stars 2020” Scott Walker card, in which he looks like a Midwestern Elon Musk, were arrayed. I dutifully snapped a picture and headed in.

Anyone who has been to a convention can attest to its enervating nature: climate controlled, stupefyingly boring spaces where people wander aimlessly or rush quickly, all staring into the middle distance for recognizable or famous faces moving amid the throng. Politicon, especially, made for a strange kind of people watching. It was like being in the concourse of a sports arena. Kids who probably weren’t alive for 9/11 wore throwback “Reagan/Bush ‘84” t-shirts; attention seekers like glam pop star Ricky Rebel struck poses and talked about “pop-politics”; a startlingly large number of bespoke brown and black men were made conspicuous beneath red MAGA hats; tote-carrying NPR types abounded; there were enough press passes and equipment to start a thriving production studio. The political merch business must be thriving.

None of this is shocking of course. Press releases and marketing for Politcon, as well as every sound bite and local TV station, pushed a similar line: entertainment. Many of those to whom I spoke readily admitted they were here for the spectacle. A trio of grad students and self-described political junkies down from Carmel also drew on the wrestling analogy. They noted the need for big names and opined that events like this would do little in the way of real political change. Another attendee, Cheylynda, admitted she was here mostly just to see the event, while noting it had little substance, particularly any focus on regional issues.

While I sat in one of the big bay windows in the carpeted hallway, the line for the bathroom became confused with the line to get into the panel discussion on campus censorship, featuring living lightning rod Ann Coulter. A man wearing a red, white, and blue flannel and jeans sat down next to me. His piercing blue eyes shone from below the brim of his immaculate MAGA hat. He was there with his girlfriend, whom he was turning on to politics, which he said he had been into forever. He gestured to someone standing close by also wearing a red MAGA hat, only mesh. “Do you think he was into politics two years ago?” I said I didn’t know. He half-scoffed at the man’s back. His girlfriend reappeared from the scrum of the bathroom line. Somehow even politics could be something to claim as being into before it got played out, like a band or a bar.

Later on Saturday afternoon, in a packed Civic Auditorium, Chelsea Handler interviewed right-wing wunderkind Tomi Lahren. Handler began the session with requisite listen-to-the-other-side lip service and professed a belief that her young subject was sincere and should be heard. As the discussion progressed, she was taken aback, horrified even, by the crowd’s reactions. Boos and cheers rang out whenever their woman scored what they thought was an undeniable rhetorical victory. “This isn’t a football game,” Handler admonished. She seemed clueless that Politicon was entertainment and that the crowd were mere fans. Lahren, meanwhile, basked in it, at one point proudly admitting she, at 24, was still covered by her parent’s health insurance, thanks to the ACA. “For shame!” bayed the good Democrats in the crowd, and Handler looked exasperated. After 20 minutes I’d had enough and walked out.

Politicon is a media event tailor-made for our time. It takes the early successes of cable news, which got people like my grandfather to consume reporting on politics as an entertainment and wed it to the low stakes of sports. It plays on an ossifying us-and-them standard. Red Sox vs. Yankees; Lakers vs. Celtics; Red vs. Blue. The other side is tolerated in order to confirm one’s own already-held beliefs. By pushing this narrative, the mediation of politics through bloodless competition masks something far deeper and more unsettling.

In the second episode of their podcast History Matters, the Los Angeles-based historians Keith Pluymers and Patrick Wyman discuss concepts of political breakdown and crisis. Drawing on examples of Stuart England and the late Roman Republic, they forward a fascinating thesis for our current moment. Much like the Roman Republic, political order in the US is based on a set of unspoken conventions and ideologies about how politicians and people must behave, particularly in terms of compromise or bipartisanship. Washington “worked” so long as politicians of all stripes agreed to follow these rules.

However, instability and dynamism are facts of history, and when actors begin to transgress those conventions we find slow-burning changes or historic ruptures. For Romans of the late Republic this meant a major increase in political violence and assassinations, something unthinkable a century prior. In 2017, this means a type of politics that has been brewing for some time in the US, is personified by Trump, and represents a group “engaging in the naked exercise of power” while the other is still trying to craft consensus.

Thus, Handler’s and Lahren’s differing reactions to the unspoken aims of Politicon is telling. One represents a group that, as Emmett Rensin wrote in these pages, is “standing beside a smoldering ruin… attempting to reassert control over a world they no longer recognize.” While they pine for the veneer of wonkish civility that masked the unpleasantness of double-tap drones strikes, mass deportations and means testing for welfare, the other side has shed formerly “shared fictions” of our politics for naked power wrapped in the accusatory language of illegitimacy, fakeness, and white victimhood. If he wasn’t one of those who spent his life believing those national political fictions, my grandfather might have even appreciated the sheer audacity of it. However, I’m not sure he would have bought a ticket to Politicon.

Image via Getty on behalf of Politicon 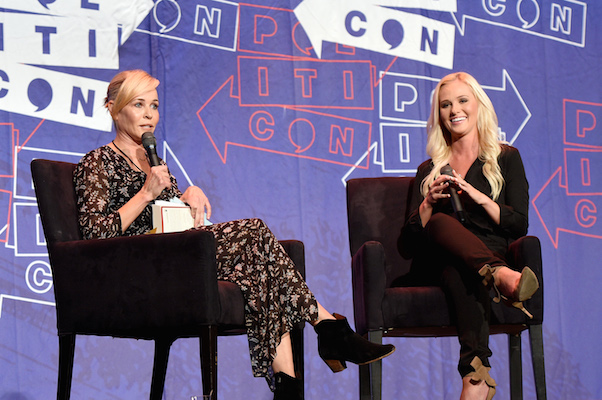