In David Shields’ 2015 photobook War is Beautiful, the photographs are stunning, often heroic, but the moments are dreadful. There is the frame of a young boy, bathed in harsh light — mimicry of studio lighting — and placed against a raging flame and burnt-out car. Other images, practically pornographic, portray the bodies of the deceased, non-Americans fallen on reddish clay, and set against the backdrop of an American service member or convoy — allegories for the American war machine as it discards local life.

Over many years, Shields became disillusioned with “the parade of beautiful images” he witnessed on A1 of The New York Times. So, he compiled and published the frames into War is Beautiful, which enlightens, with brutal irony and malice, our collective and manicured gaze of war. War is horrific, he says, but America’s fights are made glorious and just through memorable tropes in well-framed photographs.

His photographs are recent, but the critique, itself, is old. “The argument that modern life consists of a menu of horrors by which we are corrupted and to which we gradually become habituated is a founding idea of the critique of modernity — a tradition almost as old as modernity itself,” wrote Susan Sontag. And yet, the American acclimation to suffering in war, which is made slightly less horrific when seen daily during a morning coffee, has given way to a particularly fervent dramatization and glorification of war.

There is one particular American tragedy that the passage of time and the American penchant for romance has rendered particularly heroic: Pearl Harbor. It is a date of infamy, of treacherous surprise. “Remember Pearl Harbor!” cheered Americans in wartime. The attack caused American involvement in the Second World War to be arranged in a noble frame, construed as right and just: intervention was a righteous response to Japanese treachery. And after the war ended, the narrative of December 7, 1941 endured. (Of course, in victory, all of a victor’s acts are remembered as good and justified.) Pearl Harbor has remained unscathed even through national reckonings of the representation and misrepresentation of war, even during American involvement in unpopular wars, as in Vietnam. And so, John Gregory Dunne wrote in 2001, “Through the perspective of history, 1941’s day of infamy might now be seen as a propaganda victory of incalculable value.”

No medium has been more central to the continued perpetuation of the American story of Pearl Harbor, and all that it signifies and forgets, than film. Roland Emmerich’s “Midway” (2019), for instance, is a familiar and recent cinematic example. In it, Pearl Harbor is a traumatic prologue, clad in classic tropes of intelligence failure and innocence, to a grander heroic display of American military might. The special effects are dramatic, and the American tide-changing victory at Midway Island is climactic. But this is an old format, an echo of when cinema, as reportage, was enveloped in webs of censorship and patriotism. Film directors, just as correspondents, were beholden to what John Steinbeck — himself a war correspondent for a stint — called “a huge gassy thing called the War Effort.”

And so, we find one of the earliest cinematic renderings of Pearl Harbor in 1943, during the war itself: “December 7th.”  The work of John Ford and Gregg Toland, the film was a masterful failure of wartime propaganda, combining staged shots with a smattering of real documentary footage. The version shown in wartime was not the first, but the second edit, the original not shown until after the war’s end. Both versions open with a sailor’s hat and splattered blood on concrete: a still-life of death. It is overlain by a shadow in the shape of “V for victory,” as if to say the American blood spilled at Pearl Harbor is horrid but patriotic. Ford and Toland make ample use of sailors shooting from the ground, wrought in close-ups, with eyes trained on the sights and faces covered in dirt. The tight shots show the grit and mettle on their faces: ordinary men took the call, heroic and beautiful.

After the war ended, and Allied victory affirmed, Pearl Harbor was fixed as the origins of an American epic, of what we have come to know as “the good war.” And it was in postwar mass culture, as in wartime film and reportage, that a myth took shape, which glossed over trauma and displaced pain with the splendor of victory. “The real war was tragic and ironic, beyond the power of any literary or philosophic analysis to suggest, but in unbombed America especially, the meaning of the war seemed inaccessible,” wrote Paul Fussell, the scholar and World War II veteran, in Wartime: Understanding and Behavior in the Second World. When the war ended in 1945, it was film, as literature, that helped perpetuate Pearl Harbor’s remembrance and set the attack in a longer historical trajectory.

Take the narrative wrought by Delmer Daves in “Task Force” (1949), a story of a single American naval aviator (Gary Cooper), as he heralds the importance of air power from the interwar to the postwar. Pearl Harbor is rendered through the gaze of civilians in what is perhaps one of the best allegories of national innocence. Adorned in all white, civilians play tennis but are strafed by Japanese planes. The innocence is so raw, and thought of war so remote, that those on the tennis court first mistake the planes for returning American aircraft. A woman falls on the court, held in the arms of tennis partners. Though most of the film is black and white, the final sequences — including beautiful spectacles of aircraft carriers and planes bathed in the light of dawn — are in color. And so, Pearl Harbor is a momentary tragedy, overshadowed by later and beautiful military heroism, out at sea and in the air.

To trace the portrayals of Pearl Harbor in the decades that followed “Task Force” would be to traverse a memory landscape of romantic successes, action flops, sci-fi features, and comedy oddities. There was “From Here to Eternity” in 1953, which sets romance and the darker side of military life to the backdrop of the impending attack — the film’s penultimate act. In 1970, a joint American and Japanese production team crafted “Tora! Tora! Tora!,” released to negative reviews, which reconstructed the lead-up to the attack in both America and Japan. In 1979, Steven Spielberg tried his hand with “1941.” The focus was not on the attack itself, nor the time before, but the hysteria after. Next, “The Final Countdown,” more a naval advertisement than a historical feature, asked, in 1980, what would happen if an American nuclear carrier, from the height of the Cold War, was sent back to December of 1941.

And then we arrive at Michal Bay’s 2001 film “Pearl Harbor.” In A Date Which Will Live: Pearl Harbor in American Memory, the historian Emily S. Rosenberg wrote that the film had “turned Pearl Harbor into a veritable cultural industry,” and spurred mass cultural products and a Washington gala. The film was epic in proportion, but the reviews were bad. A.O Scott’s review in The New York Times ran with the headline “War Is Hell, but Very Pretty.” He writes, “the violence has no emotional resonance,” for the action is grand, and grand alone. Ben Affleck and Josh Hartnett make for ideal American heroes — white and ordinary, thrust into greatness. But this beauty and glorification came at another cost­: a process of brutalization and racialization.

In the moments before the Japanese fleet attacks Pearl Harbor, Bay brings us onboard to the Japanese fleet, offering a rare glimpse of an ordinary enemy. A young Japanese pilot, or maybe sailor, writes, at sea, on the eve of Pearl Harbor. He is set against an orientalizing tableau set in miniature — shrine, nationalist flag, sake bottle. A voice-over, in English, though with a slight unplaceable accent, begins, “Revered father, I go now to fulfill my mission and my destiny,” before he extolls virtues of “sacrifice,” “honor,” and “nation.” We know his name­ is Kazuyoshi, and we soon see him adorned in aviation dress. But just as quickly as he appears, he disappears. Does he live? Does he die? Does it matter? He is the enemy, a “Yellow Peril,” not our heroic American aviators.

But this story, of racism and brutalization, embedded in the narrative of Pearl Harbor, is lengthy and dates to the war itself. In the original and longer edit of “December 7th,” we find questions about the patriotism of Americans of Japanese descent in Hawaii. “A hyphenated loyalty,” it is said, an accusation embedded with the same prejudices that led to the callous wartime internment of an estimated 120,000 Japanese Americans. The 1943 Warner Brothers feature, “Air Force,” a portrayal of American pilots during Pearl Harbor, took it a step farther, fabricating local sabotage on the day of the attack. Even as the war ended, the cinematic renderings of Pearl Harbor never shed racist undertones. The enemy fashioned on screen was just altered, and the racial caricature shifted: a focus on the enemy as a civilian at home (“among us”) to, predominantly, one from abroad, clad in a foreign military uniform. Filmmakers now gazed into the cockpits of Japanese Zeroes during the attack. The pilot as an iteration of evil, crazed and manic — bandana clad head; or the bumbling Japanese sailor, as wrought in Steven Spielberg’s 1979 feature, “1941.” We can place 2001’s “Pearl Harbor” in this tradition.

The beautification and valorization of American war comes with the cost of brutalizing those deemed the Other. The stakes are not hypothetical. Our memories, our cultural portrayals, our collective national stories inform and shape contemporary opinions and politics. “Pearl Harbor” was released in the summer before 9/11, the latter of which recalled, in the minds of many Americans, the events depicted by the former. At the moment after the towers fell, “pundits and politicians and appalled Americans everywhere almost reflexively evoked ‘Pearl Harbor,’” wrote the historian John Dower in Cultures of War: Pearl Harbor / Hiroshima / 9-11 / Iraq. “Past and present were momentarily fused, like a flashback in a film.”  It didn’t take much imagination for most Americans. And the same anxieties, once pointed at Japanese Americans after 1941, were then trained on anyone deemed to fit a caricature of Arab or Muslim. 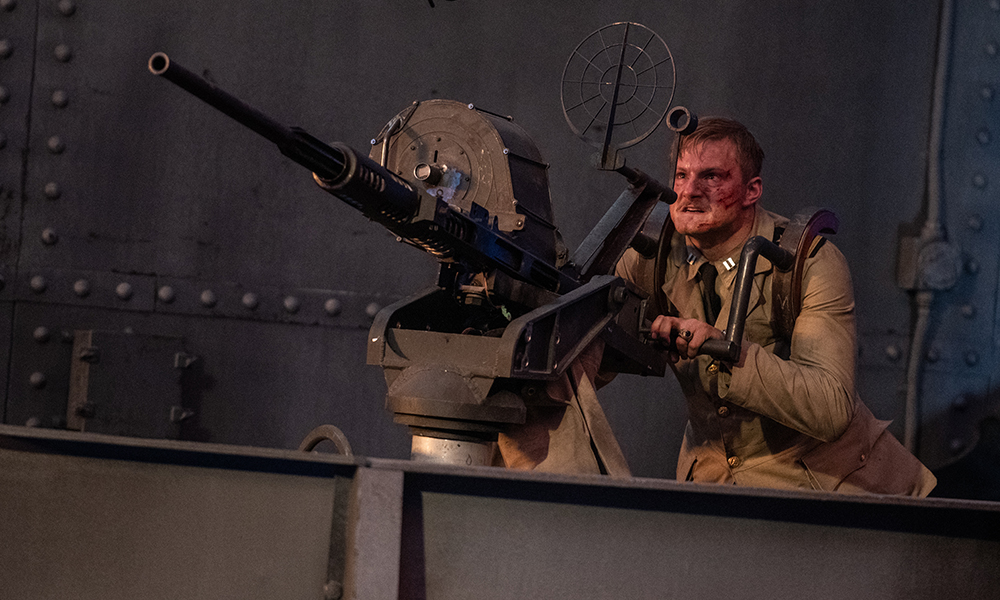