As a child I used to condemn Jesus to death at the start of every Holy Week on Palm Sunday. Our priest would read from the gospel of John and he’d ask, lightly in character as Pontius Pilate, what we should do with the son of God. “Crucify him!” we’d say, with varying degrees of enthusiasm. That was what the script in our missalettes said, but I wished I could say something different. My religion teacher had taught me what happened to a crucified body — how the nails pierced the space between the wrist bones, how the body slumped forward from exhaustion, and how this probably pulled the arms from their sockets before asphyxiation. It upset me to see everyone at church, even the nuns, call for anyone’s death this way so at some point I decided to only mouth the words, failing to grasp the point of the spiritual exercise but sincerely trying to not kill Jesus again this year.

I think it was these early memories that led me to Zamora to see Spain’s oldest Holy Week celebration last year. It began two days before Palm Sunday and ended nine days later on Easter. Wikipedia advised me that unlike the celebrations in bigger cities, this one would be somber and contemplative. Here, participation went beyond a call and response at mass. About half of the residents of Zamora were members of one or more of the city’s 16 confraternities, some of which have over 1,000 members. For most of the year the confraternities function as loose social and charitable clubs but during Holy Week they mount 17 crucifixion-themed processions which recall their original purpose — a way for members to atone for their sins.

During the processions the confraternity members wore floor-length robes and capes. Some had a simple hoods but most included caperuzos, the iconic meter-high conical hats with fabric flaps that cover the wearer’s face. Let me get it out of the way: the confraternities looked a lot like the Klu Klux Klan. When they trudged through the city at night carrying torches and crosses, it didn’t look good to an American like myself. But the people of Zamora have been celebrating Holy Week the same way since 1279 and they aren’t going to change for a bunch of 19th-century racists. Originally, the caperuzos mimicked the hat used to shame criminals and symbolically shamed the wearer for their sins. The hoods protected their identity so no good deeds done as penance could be attributed to anyone.

The highlights of the Holy Week processions were the pasos — wooden parade floats carried on the shoulders of confraternity members with life-sized figures illustrating the Passion of Christ on top. Most were bloody: Jesus crowned with thorns, Jesus stripped and tortured, Jesus as a corpse with his body rendered in a light green. Everyone in Zamora found a spot with a good view of the pasos hours before the processions started. We amused ourselves by checking our phones or eating packets of sunflower seeds. The teenagers next to me texted and met up with their friends, planning for a night when curfews were suspended. At this point we were midway through the week so the festivities were nearly continuous with a midnight procession ending just as the five a.m. procession began.

I got a text from a friend who had been to Zamora while studying abroad. “How’s Holy Week?” she asked, “Is everyone still making out?”

Wikipedia didn’t alert me to this fact, but it was true. The processions that night would be a lot like the ones before. They were solemn and completely silent events except for a single drumbeat or a chanted funeral dirge. But as the night wore on, couples pulled each other closer as the temperature dropped. High school girls ditched their sweaters and compensated by getting closer to the boys, the more enterprising of whom had brought blankets, ostensibly for warmth but also good for shielding wayward hands from the eyes of the Virgin Mary. She floated by after midnight on her paso, cradling her dead son, escorted by hundreds of hooded men in black.

Anyone tempted to blame their less-than-reverential behavior on the fact that these kids were millennials or whatever the Spanish word is for “kids these days,” only had to look as far as the town square to see that a certain amount of fooling around wasn’t just tolerated but had somehow been a part of the experience here for a long time. Huge black and white photographs of Holy Weeks gone by were hung on the sides of the buildings, mostly highlighting how little had changed in Zamora except for fashion. In one of them, a girl straddled a boy’s lap. Their faces were buried in a deep kiss and they pulled each other closer by the waist and the neck. They seemed oblivious to the camera and even less aware of the life-sized Jesus directly behind them, dragging his cross to Golgotha.

This picture of eroticism in the face of an execution emphasized a paradox that I had noticed all week. Wherever there’s death, there’s decadence. It was threaded through every aspect Holy Week, though often in less salacious ways. For the whole week in Zamora, no one seemed interested in work except for the people selling food, drinks, candy, and cigarettes, which everyone — including the sellers — had bottomless appetites for. But the specter of death that marched by us tainted even these simple pleasures. Their consumption was anxious, more in line with the excesses of a last meal than the celebration of a feast. It was as if we collectively wondered, if even God can die a painful and humiliating death, then what might be in store for all of us? What might our fellow crowd-members say if it was our fate that was in their hands? Or more chillingly, I asked myself what I was capable of. Me, the one who said “crucify him.” We all knew that the apex of our own cruelty, and the cruelty of our fellow men, was our own death. So while the human sacrifice we demanded in church played out in the streets, we indulged like dead men walking in tapas and wine bars that stayed open until dawn. We reached out to each other for what seemed like it might be one last time.

The connection between decadence and death has long and sordid history. But I don’t think it’s been better examined or explained than by the French philosopher and sometimes dirty-book-writer, Georges Bataille. According to Bataille, a life that’s spent dedicated to productive activities — the kind of everyday work left undone during Holy Week — is a life that’s obsessed with its own legacy which can live beyond a human lifespan. This is a kind of immortality and a life that’s dedicated to immortality is actually obsessed with the avoidance of death. This is a life that’s denied. So according to George, to live is to practice dying, or to die just a little. There’s a reason the French called an orgasm la petit mort.

In Bataille’s mind, the kind of sex that allows you to die a little (which is not the kind intended to make babies to carry on your lineage) is an act of violence. It violates our borders. It’s a loss of control — a moment when people’s innermost places react without the consent of the brain, puppeted by another. It’s horrifying and embarrassing, but we do it because for a moment, we’re not alone. When we obliterate the boundaries of our body and the parts of ourselves we call our identity, we find the ability to connect to something greater than petty self-preservation. In the case of sex, we connect to another human being. But sex is only practice for the more violent obliteration to come. We lose control of our bodies again when we die and decompose. At that time, we’ll be stripped not just of our clothes but our flesh. It’s more horrifying and more humiliating, but by doing so, we’ll finally become one with the earth and with the history of the world, something much bigger than an infinite number of partners.

I’m sure I was thinking about death when I started talking to a confraternity member outside the church in the main square. He was still wearing his robe and carrying his red cone hat from his procession a few hours earlier. We talked until the midnight procession went by and then ducked into a bar around one a.m., though the procession would still wind through the city until sometime after three. The place was full of 20 and 30-somethings back in town for Holy Week and the scene reminded me of the bar near my high school on the night before Thanksgiving. Everyone was both a local and a tourist. Miniature reunions happened whenever someone walked through the door and no one was too eager to get back to their parent’s house.

The confraternity member and I got a drink and he told me about the subtleties of all the different processions while I took notes. According to him: the group with the black velvet robes were snobs. The ones with the hoods that look like sacks instead of cones were working class and a lot more fun (he was a socialist, so I took his characterizations with a grain of salt). All the guys who carried the pasos in his confraternity were year-round drinking buddies. There was no rehearsal for the parades. Sometimes people decided to march barefoot, not because they were particularly pious, but because it was actually easier than walking on cobblestones in dress shoes and it’s the kind of thing that would make your mother proud.

At some point after our first drink, I stopped taking notes. After our second drink we hated the same things, and were eviscerating Hemingway for being a jackass in Spain. After our third we were in full Hemingway mode: pressed against a medieval city wall and engaged in heavy gonzo cultural anthropology.

Eventually I rediscovered my bearings and my boundaries and we parted, going our separate ways for the night or at least whatever was left of it. I snuck past another couple on a park bench who seemed to have no intention of doing the same. I walked through Zamora as the black sky turned navy and passed a group of kids in a parking lot. They were blasting Ed Sheeran and still drinking red wine and Pepsi out of plastic Solo cups. They were dazed, oblivious to the impending day but in that moment I couldn’t muster judgment — I had obliterated myself in only a slightly different way and anyway I was pretty sure my skirt was on backwards.

I went back to my room and slept through the five a.m. procession, barely pulling myself together for the one at nine. He and I didn’t see each other again and processions wore on, each a little more like the next until cannons fired on Easter morning, shaking everyone, including me, out of their grasping, melancholy haze. Folk bands played in the streets and order was restored to our briefly apocalyptic world. Our transgressions were set right again: life became productive, we returned to polite self-sufficiency, and even the God we killed rose from the dead and forgave us all. Of course we had known this would happen. We do it every year because we need a little death in order to stay alive. 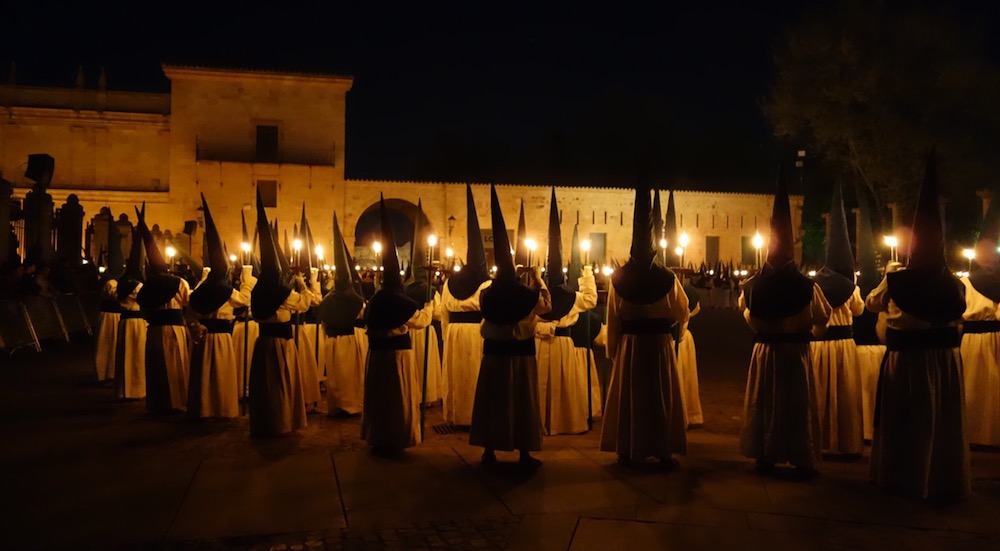