At the end of the poem “Little Gidding” T.S. Eliot writes: “For last year’s words belong to last year’s language. And next year’s words await another voice.” The lines offer hope and solace, acknowledging irreparable events foregone. But more, they provide some promise: that new words, thoughts, and language that will shape the next 12 months, and of opportunity. Maybe my own words could be what the new year is awaiting, or maybe yours. So far in 2018, the voices that stand out belong to YouTube star Logan Paul, and Donald Trump’s endless slew of tweets. This year’s words are off to a concerning start.

Freedom of the press guaranteed to journalists is being threatened from many angles, one of which is the rise of YouTube and social media celebrity. Social media “influencers” boast hundreds of thousands of followers, and now have a platform to disseminate information at a rate that was once almost exclusively accessible to the press. But though they are treated as such, these people are not journalists. There is no fact-checking, editing, or ethical standard to anchor the stories being reported. Their words run rampant, managed by hardly any regulation whatsoever.

The Collins Dictionary word of the year for 2017 was “fake,” reportedly rising in usage by 356 percent. A word that used to mean “inauthentic,” as in a knock-off purse, is “now used to mean ‘I deny your reality.’” “Fake” has been used to completely dismiss facts, and the bombast permitted to social media stars has skewed our values to accept it, implying that influence is more valuable than accuracy or tact. Skepticism can be healthy, but YouTube stars and social media influencers have recognized the public’s distrust of the press — and in particular, the public’s unwillingness to believe things they don’t want to — and decided to monetize it.

Finding a story and then gathering sources and facts is Journalism 101. Publications have strict guidelines regarding the ethics of finding credible sources, and paying a source for an interview is, generally unethical. The lines have been blurred with the rise of sponsored or branded content, which is advertising designed to look like journalism. Celebrities and publications are required to inform the public if a piece of content is a paid ad in order to maintain transparency, but often do so in a way that isn’t particularly noticeable to someone who isn’t looking for it. Many YouTube and social media influencers ask for a fee to comment the same way they might ask for a fee for speaking at a public event; the two are not the same thing. The obvious implication is that the value of their comment is worth more than the truth, limiting access to information. If this is the case, then that means reliable information that pertains to the function of this nation — and our society — will be restricted. How can we expect an informed collective of voters if the majority does not have accurate information to base their votes upon?

A paradox of the press has been created: the voices of the press are being shushed in order to amplify the smoke, mirrors, and whatever other filters are used to curate the image of social media influencers. Yesterday the president tweeted about giving out “fake media” awards, which demeans not only the media but also the fundamental rights of the Constitution. Emphasizing the notion that journalism is a joke is dangerous because it trivializes the truth by making our voices unheard or unbelieved.

The Sapir-Whorf hypothesis holds that a culture’s lexicon is determined by a collection of concepts categorized through perception and experience. Our experience determines our language. The structure of a language is dependent on native speakers’ worldview, and if a concept exists it is reflected in the language. This means that the concept can also be destroyed by words. Dismissing the press as “fake” while escalating the status of YouTube and social media influencers challenges the faith we have not only in the news, but also in the truth. Calling something “fake” does not mean it is not real, and trivializing the press does not mean the facts will stop mattering. Here’s hoping this year’s language reflects that. 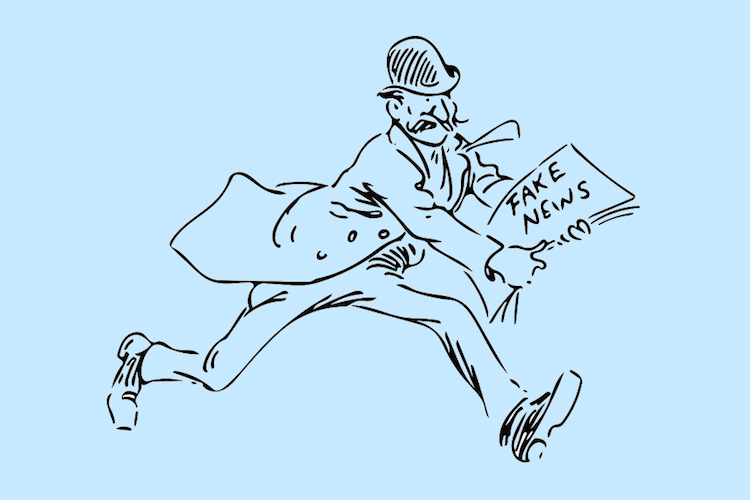