My countdown begins in mid-February. It is not simply a calendar watch for summer (though my frosty New England heart warms at the thought), but for one of summer’s attendant pleasures: the outdoor shower. If there was ever a symbol of leisure, liberty, and the pursuit of happiness, it could be found in a three-sided wooden enclosure under an umbrella of blue sky.

My friend Jennifer’s husband, Rick, is also an outdoor shower devotee. When they visited our Long Island Sound rental for the July 4th holiday this year, one of the first things he said was: “Hey, did they redo the outside shower? Looks great.”

By mid-afternoon, beachside, we were back on the topic, generating a list of shower superlatives. “You know what is the best? Taking an outside shower after a run,” I said, “Or after the beach.”

“A cold beer in the outside shower after the beach — that’s the best.” he offered.

“Didn’t you two have the same exact conversation last summer?” Jen said. We looked at each other and shrugged. We had. 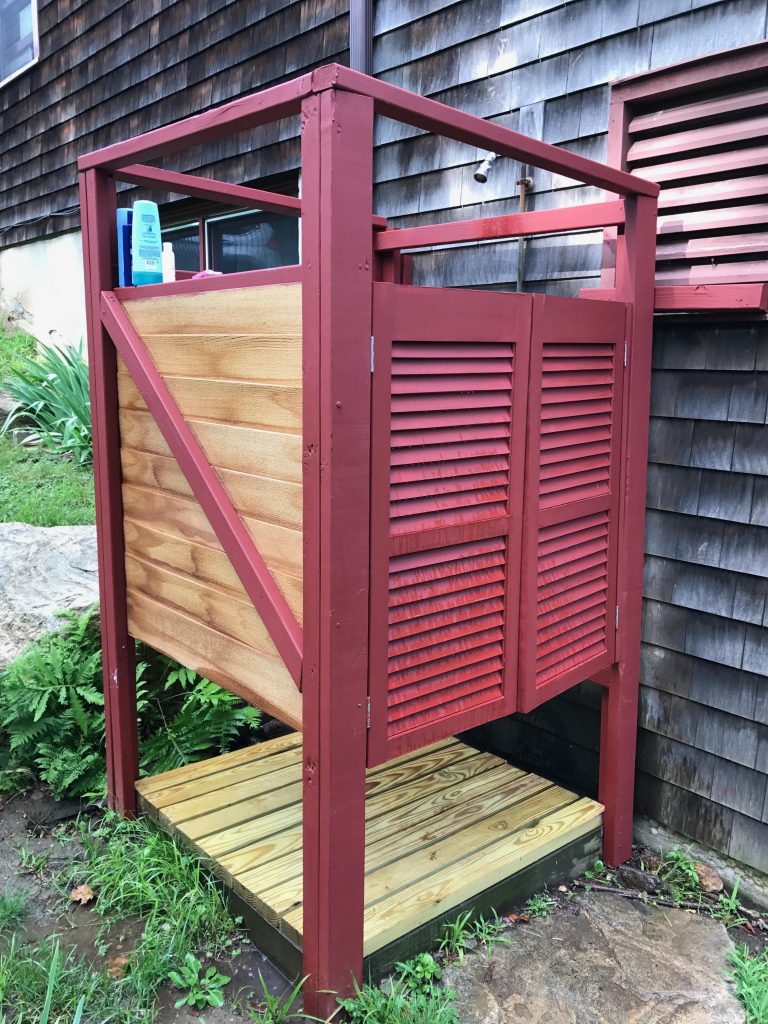 “A shower bath such as is shown in Figure 9 can be built at very little expense and will be very much appreciated by boys on the farm.”

-Bulletin of the Agricultural and Mechanical College of Texas, October 1915

My earliest memories of the outdoor shower are more punishing than romantic. Where I grew up on the coast, I was a townie, not a member of the summer crowd — the latter of whom had rustic outdoor showers affixed to their shingled cottages, and who used to wash off the salt and sand from Cape Cod Bay. My family did have an outdoor shower, but we had to travel three hours up north to a small lake house in an even smaller town called Gilmanton, New Hampshire to use it.

As a child, going up to Gilmanton did not feel like respite. Rather, it was all-work-all-the-time. My sister and I would be in charge of raking the small sandy beachfront and other various outside tasks. My parents would spend half of the weekend opening up the house and completing a never-ending punch list of projects and the other half closing up the house before our long drive home. Although there was an indoor shower and bath, my parents didn’t like to use it because they hadn’t yet replaced the septic system. Given that, the existence of our outside shower was more out of necessity than it was luxury.

It lacked hot water and though Plato suggests, in The Laws, that temperate water should be reserved for the aged, I did not subscribe to the notion that my youth merited cold water. Nor that it was invigorating or character-building, as my parents suggested. I begged to bathe in the lake, since even in late fall, that water seemed warmer than what came out of the shower spigot. Most times I lost that battle and winced as the icy pelt came fast and furious. Often, I did little to fully wash out the shampoo from my thick mop of hair, simply trying to make it out of the shower as quickly as possible.

The earliest prototype of the outdoor shower exists in nature: the waterfall. The liberating aspects associated with bathing outdoors have long served as a trope in both art and commerce. Over time, the form of manmade showers evolved along with technological advances. With the Greco-Roman introduction of aqueducts came outdoor fountains and bathhouses. When William Feetham’s patent for the first shower appeared in 1767, an indoor alternative to the bath (facilitated by a hand pump) was born.

Broadly speaking, however, showers emphasized function. They used less water and were more expedient. Though the mid-19th century brought luxuries of indoor plumbing to many regions, it wasn’t long before many realized these relative benefits of bathing outdoors — especially when one needed to clean off after manual labor. Just like that, the outdoor shower came into vogue, particularly in farming communities.

A clear value proposition for the outdoor shower is offered by the October 1915 Bulletin of the Agricultural and Mechanical College of Texas, which advocates construction of an apparatus that can be built “with very little expense” and will be “very much appreciated by boys on the farm.” The accompanying line drawn figure and description recommend adding the shower in the tower for the elevated water tank as this would help save costs on the galvanized pipe, which would run between five and 12 cents per foot, depending on thickness.

And send him on his way.”

It was the movie version of the musical South Pacific that began to change my mind about showering outdoors.

During my fifth grade year, my school chorus wore colorful leis and sang a medley of tunes from Rodgers and Hammerstein’s South Pacific, including excerpts from “There is Nothin’ Like a Dame” and “I’m Gonna Wash That Man Right Outa My Hair.” (In hindsight, this repertoire was perhaps an odd choice for 10 and 11-year-old girls and boys.) In preparation, I watched the 1958 film version wherein actress Mary Martin sings while washing her hair along with a group of other women echoing her verse of female empowerment. The water may have been cold, but the sun was shining as she smiled and danced through the song. That summer, my cold New Hampshire showers took on new meaning as I hummed the tune under the water’s spray and tried to channel their Broadway-style enthusiasm.

At the end of August that same summer, I went over to my friend, Brad’s, for the day. Brad lived across the street during the school year, but come summer, his family decamped to a beach house a mile down the road. At his house, there was an outside shower that we used only after ocean swims and wading through the marsh at low tide. Here, an outside shower served a clear purpose for Brad’s mother (it kept us from tromping through the house while she was preparing dinner) but also entertained us because it was outside of the norm. At that age, and even now, simply adding a friend to any equation makes the ordinary seem like an event…a future memory. We still laugh about the pranks we would pull on the unsuspecting shower goer — like shaking baby powder or pouring a pitcher of lemonade over the top enclosure (in our defense: we were only 11).

A photograph accompanying the article “Lawn Shower Keeps Children Cool,” from the July 1933 issue of Popular Science magazine posits outdoor showers as a way to keep children occupied and out of the house.  In the piece the magazine provides simple instructions featuring an easy-to-follow diagram for readers to make an outdoor lawn shower. A list of the various components needed for its construction are provided based on the author’s DIY experience, the project’s cost was estimated at $1.94. (A clean house and occupied children: priceless.) 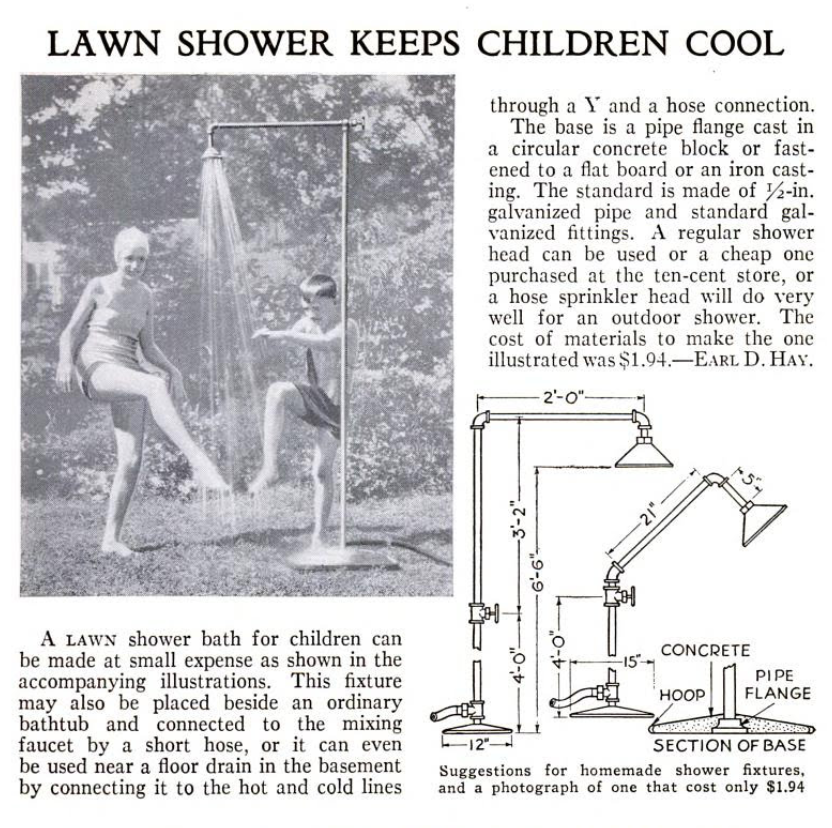 By the mid-20th century, the outdoor shower had shifted from a routine step after manual labor to a backyard feature to finally a symbol of leisure.  In the 1942 book Your House in the Country: A Practical Handbook for City Dwellers, second-home owners are offered advice for the construction of this seasonal edifice to complement their seaside escape from urban life. “An outdoor shower…is a necessity at the shore to prevent tracking mud and sand all over the house. A trellis with vines (not roses, for obvious reasons) furnishes an attractive screen which is adequate, since the shower will be used during the summertime only.”

The highpoint of my adult summers is the time we spend at a well-worn beach house on the Connecticut shoreline. The house itself hasn’t seen an update for many decades, but its location — and of course, the outside shower — carries me through the gray months of winter.

My favorite is the post-beach Golden Hour shower, where I can hear the crack of the Wiffle bat from kids playing pickup games on the large shared lawn, or the neighbor’s reggae-inspired playlist amidst the ambient hum of cicadas. I no longer need to channel Broadway-style enthusiasm, for in these moments I am fully transported by just closing my eyes.

“If liberation is the spirit of summer’s luxury — bare feet, open windows, short sleeves, long weekends — then showering outdoors deserves to be in the first line of freedom. For devotees, it embodies the romance of a summer day.”

Last week, Brad texted me a photo of his newly-completed outdoor shower at his summer place in Provincetown. Of its function, I have no doubt. Nor do I question its aura of leisure — ably communicated via image, though I have yet to see it in person. Its rain shower head is angled to allow for sand and salt removal, while tucked away in a cozy courtyard flanked by begonias and potted ferns. It looks perfect. 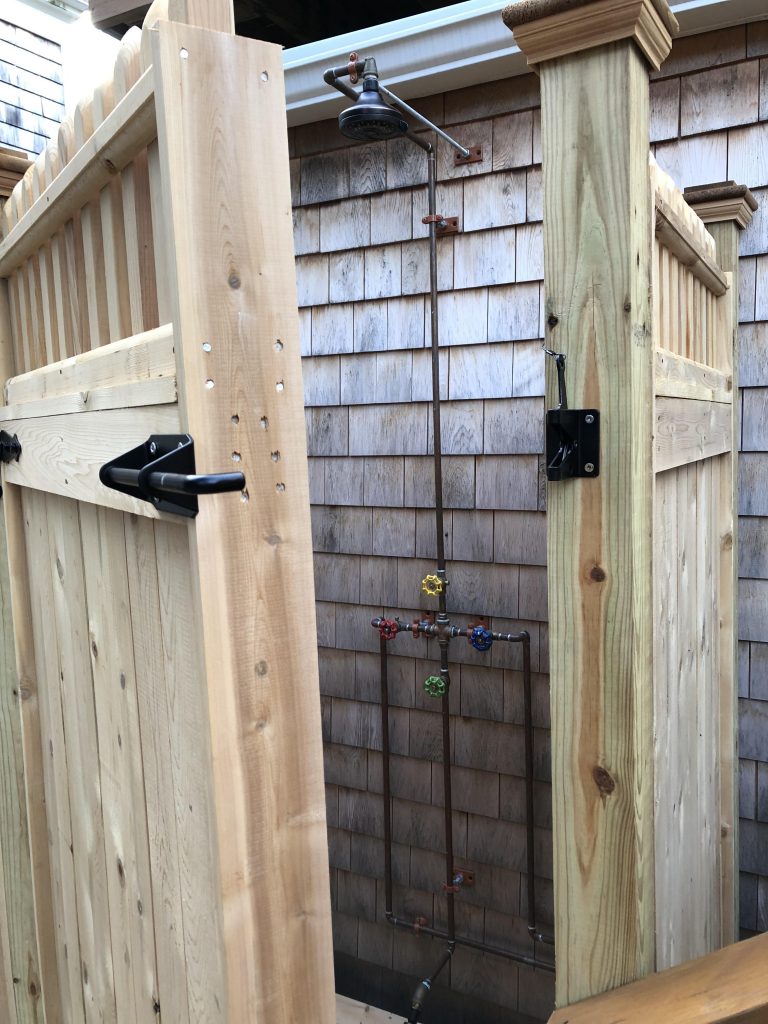 Before next summer season, I will have my own rectangle of aquatic retreat. It will be tucked away in my modest-sized backyard that is closer to Boston’s city limits than it is to the beach, but I’m not complaining.

In fact, I’m counting down the days. 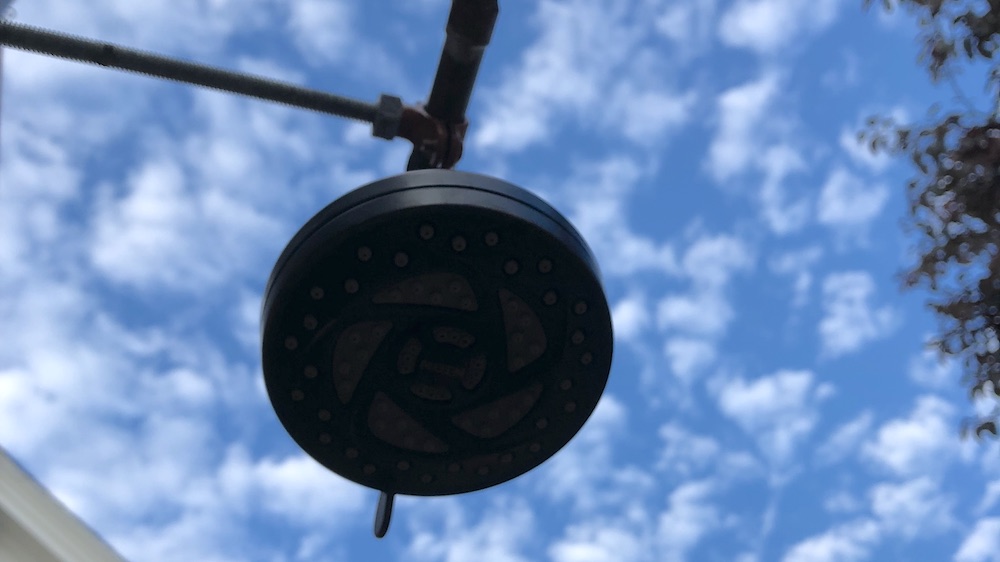