Since Turkey’s main opposition party won the mayoral elections in June by a landslide, Istanbul, one of the world’s oldest cities, has regained its self-confidence. In buses, ferries, and subways, young Istanbul locals commute defiantly. Their ballots have disrupted president Recep Tayyip Erdoğan’s dream of a new conservative era in Istanbul. Only three out of 10 first-time voters favored the government’s mayoral candidate for Istanbul, found Turkey’s leading pollster.

Istanbul’s millennials wouldn’t look out of place in London or New York. Pink haired, tattooed, gender-fluid teenagers accompany my morning commutes. They’re mostly on their iPhones, streaming Hasan Minhaj on Netflix, or TikToking, or reading a World’s Classic. Those introverts seem immune to jingoistic speeches delivered by politicians. They are the voters the government can’t reach, and their numbers are growing.

These winds of change don’t merely blow in westernized quarters of this City on the Seven Hills. Youths of overwhelmingly conservative neighborhoods are also steering away from Turkish parochialism. I am a literary historian and I find this shift intriguing. A tramway that ran between Istanbul’s conservative Fatih and westernized Harbiye neighborhoods gave its name to Fatih-Harbiye, a classic novel from 1931 whose author, Peyami Safa, argued East-West, conservative-westernized, pious-secular tensions defined Turkish life.

The 2010s have complicated those binary oppositions. The Theory of Secularization, a new book by Turkish scholar Volkan Ertit published last year, claims that Turkey has secularized under the AKP (The Justice and Development Party), with increased mobility, an extension of private sphere, and easier access to education. “The AKP’s desire to build a ‘pious generation’ failed,” Ertit writes at his book’s conclusion: “As Turkey rapidly modernized it also experienced a process of secularization.”

Inside a pressured tunnel under the Bosphorus Strait, I shuttle from Europe to Asia and watch bright-eyed girls in headscarves poring over monographs. Nearby, conservative male students joke about the power fight inside the AKP. They show us how Istanbul’s youth can no longer be easily categorized as strictly pious or secular.

For years Erdoğan and his Islamist allies advised the pious youth to study history, and they listened to him. But since 2016, when Erdoğan began building a presidential system, this historical knowledge began to challenge his rule.

In their first years in power Erdoğan and his ilk pointed to the centralization of powers in the hands of Atatürk and his followers in Ankara, after modern Turkey’s foundation in 1923, as the crux of the country’s problems over the 20th century. As defenders of Turkey’s membership to the European Union, they competed against the religious fervor of nationalists who fetishized national sovereignty and reminded them of the multi-ethnic Ottoman Empire they’ve inherited. Nowadays they talk about decentralization as their chief enemy and have solidified all powers at the presidential palace in Ankara.

The bus, a symbol of decentralization in Istanbul, is where conservatives built their legacy. After he became Istanbul’s mayor in 1994, Erdoğan’s Islamist cadres transformed public transport. Before Erdoğan, the Turkish state disallowed headscarfs and other anti-Kemalist looks in its university campuses, military barracks, and courts of law. Islamists garnered their energy, and legitimacy, from buses, trains and ferries, places situated between the privacy of home and the officialdom of state institutions, by allowing people to be themselves, at least while on the move.

As a young leftist going to college in the 1990s, I’d breathe a sigh of relief on the journey home. Students were easily charged with membership to communist organizations, which carried a 14-year prison sentence, so at school I’d hide my books and mute my ideas, in fear of state retaliation. But in the bus, I’d take out my Trotsky book. My bookworm friends, Kurds, Islamists, feminists, and socialists from different groups, shared that fear. As late as 2000, the Turkish state still banned girls in headscarves from colleges; speaking Kurdish in public was illegal. It was the AKP’s opposition to this culture of officialdom that made it popular among liberal youth after its foundation in 2001.

But 18 years after its rise to power in 2002, the AKP’s vision for Turkish republic’s centenary, in 2023, began to resemble the centralized systems of ex-Soviet states. The government’s growing semblance to its archrival, the CHP (Republican People’s Party) which ruled Turkey under a single-party regime before free elections were introduced in 1950, is another troubling talking point for conservative youth. When the government abruptly cancelled local elections in April — accusing the opposition candidate, who won by 13,000 votes, of being a thief and an ally of terrorists — it was hoping to coerce young conservatives into changing their ballots. Instead, young voters considered the move an insult to their intellects. In June, the AKP lost with a margin of 800,000 votes.

It is easy to explain the disconnect between Istanbul’s vibrant youth and Ankara’s graying political establishment. The government banned pride marches since 2016; access to Wikipedia was blocked between 2017 and 2020; Turkey is among the world’s leading jailer of journalists.

In 2013, when 3.5 million citizens gathered in Istanbul’s Gezi Park and other public squares around Turkey to demand a more democratic country, young people became suspect in government’s eyes. At the time, young “Islamist socialists” joined the marches, but most young conservatives called criticisms of Erdoğan’s interference in public life baseless, and fearing an undemocratic shift in power, they defended the government.

Last fall, one of Istanbul’s leading conservative universities, Şehir, earned the ire of the AKP. Founded in 2010, Şehir is a private college with links to former prime minister Ahmet Davutoğlu, a professor of international relations known by the moniker “the Turkish Kissinger.” Soon after Davutoğlu announced plans to form a runaway party earlier last year, state-owned Halkbank said it would freeze Şehir’s accounts.

The school has more than 17,000 students, many on scholarships. The teaching staff includes some of Turkey’s leading literature, political science, and sociology professors; Turkish Nobel Laureate Aziz Sancar was a member of the board of trustees. But Şehir can no longer pay its staff, and after Halkbank’s takeover of its assets, its rector said their electricity, internet, and water could soon be cut. A few weeks later the government announced it would seize Şehir.

Such developments signal difficult times for conservative college graduates. Turkish youth unemployment rose to 27.4 percent from July to September in 2019, according to Turkish Statistical Institute figures. Following 2018’s currency and debt crisis, many young Turks have been struggling to afford food and transportation costs which saw steep increases. “Geçinemeyenler”, a BBC Turkish documentary on precarious Turks, is nearing half a million views on YouTube.

In 2019, five students from the Middle Eastern Technical University committed suicide inside their campus. The suspicious death of Rabia Naz, an 11-year-old girl who purportedly killed herself in a small Anatolian village in 2018, has become another focal point. A handful of high school students marched for Naz in Istanbul’s Taksim Square last fall, proclaiming she was killed by a driver who fled the scene. They were quickly rounded up by plainclothes policemen. In October 2019 alone, three families committed suicide by taking cyanide after struggling with financial difficulties. As a precaution, the government banned cyanide sales.

Ekrem İmamoğlu, Istanbul’s new mayor, has tapped into this disconnect between conservatives and the government. He campaigned on a social-democrat platform, but comes from a culturally conservative background: he is from the Black Sea region, a heartland of AKP voters and can recite the Qur’an. He is 49 years old, fluent in English, and witty in campaigning. While serving as a district mayor in Istanbul before the elections it was his focus on building youth facilities that earned him popularity. Many Turkey observers assume he’ll enter the presidential race against Erdoğan in 2023.

In November İmamoğlu went to London’s Chatham House to talk with investors about Istanbul’s infrastructure projects. He met London mayor Sadiq Khan, the politician he closely resembles as a left-leaning Muslim politician. He later tweeted about their “fantastic” meeting: “#Istanbul and #London will now be closer to each other than ever,” İmamoğlu wrote. Back in Istanbul he announced that Istanbul Metropolitan Municipality would resume building two new metro lines with funding from Deutsche Bank. He also said he was keeping a campaign promise to deliver “People’s Milk” to families in need in Istanbul.

I read about this intriguing milk project in an Istanbul bus. I was surrounded by pious bookworms; we were heading into an emancipated but precarious new decade. In this secularized public space, I felt safe from Ankara’s long arm and hopeful about the future of Istanbul’s youth. 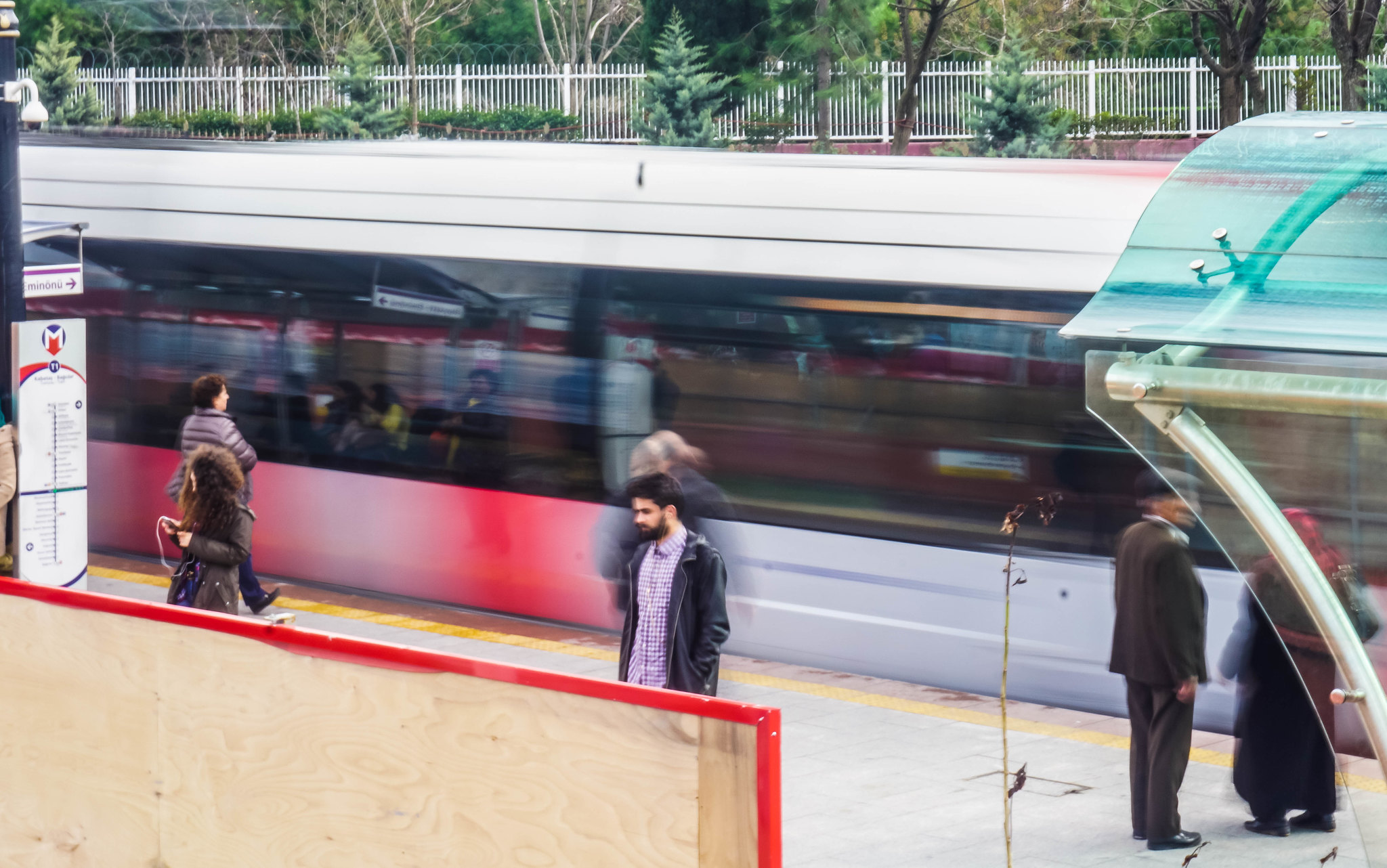