Another Nowruz, the thousands of years old Persian New Year which falls this year on March 21, and literally means “new day,” is upon us. This year it carries an important message as the country has seen demonstrations starting in December, with an important wave that continues today with women taking off their hijabs in protest.

Most of my family, like many others, left Iran in the few years immediately following the Islamic Revolution of 1979, when sadness, grief, oppression, and darkness fell over the land, and opportunities for education, work, and any form of healthy social life vanished. One symbol of the Revolution, which carries so much meaning for so many of us Iranians, is the forced hijab, the required covering of head to toe for women.

I understand why people stand up and even die to protest to their government, for the same reasons my family fled Iran 35 years ago.

Growing up as a little girl in Iran, I heard from women relatives: “Before you were born, before the Islamic Revolution, we had rights, people could sing, dance, listen to music, go on dates, celebrate Nowruz publicly. Things were not perfect, but we had basic human freedom.”

One of my uncles left for Paris and became an actor. Another male teenage cousin was drafted into the army for the Iran-Iraq War but escaped Iran through the mountains, got caught by the revolutionary guard, and put in prison. He was threatened with death if he ever tried to escape again. But he didn’t give up; he escaped again and safely made it to Europe. His brother, who was still too young to get drafted for the war, left before he too would be barred from leaving the country. Both the boys were later joined by my aunt, uncle, and grandmother, who all reside in Europe.

My father, an engineer, left Iran in 1984 and moved to the US where he could work and live in freedom away from religious fanaticism and oppression, where he could create a life of opportunity for me as his only daughter. My parents were separated, and my mother left Iran a few years later, while battling terminal cancer and having exhausted the treatments available to her in Iran. She was also sick and tired of the oppression she had lived in since the Revolution, and perhaps wanted to live out the remainder of her days without being treated as inferior, a mere sexual object with no real voice, rights, or freedom to live in dignity.

My mother, Parvaneh Javdan, was an elegant, outspoken, and intelligent woman with strong spiritual faith, and had little patience for the corrupt authoritarian male clergy who were ruling the country. She hated that they dictated what type and color of clothes she could wear, whether she could sip on a glass of wine, or listen to her favorite Iranian music.

I remember one day she and I were walking in the streets of Tehran going to buy groceries (we didn’t own a car), and the revolutionary guard stopped us for wearing nail polish on our fingernails. They yelled out some obscene remarks. “Woman, shame on you, you are acting like a prostitute and teaching your daughter to grow up the same!” I still remember the feeling of disgust in my guts, frozen in an anxiety state, wondering what the crime was we were being charged with. They pulled us into their van, shoved a bottle of nail polish remover and a few cotton balls towards us, and watched us take the polish off, threatening to take us to prison if we didn’t.

My mother eventually sought refuge in Vienna, Austria, one of the countries accepting refugees at that time. Once both my parents had left, I stayed with relatives for a few months, but eventually at age 12, I mustered up enough courage to leave everything that was familiar, and joined my father to begin a new life in the US. I never got to say goodbye to my mother before she died of cancer at age 47 in the hospital in Vienna. With all her pain and suffering, she chose to leave everyone and everything she knew and loved in her own country behind, just so she could die a free woman, in dignity, where she was treated as a human being, instead of living out her life in oppression.

Now almost 30 years later, I have not been able to return to my home country. I do not stand alone, as there are around one million Iranians in the US, with the largest concentration in the Los Angeles area.

I have not felt safe to return to Iran since my departure in 1989. I miss my family and friends with whom I’m still in contact via social media, phone calls, and visits to Europe.

Now as a Child, Adolescent and Adult Psychiatrist, I have a deepened appreciation for what humans go through when they live in oppression, when they flee for safety, and what it takes for them to find ways to adjust and adapt to their new homes and lives. I support many children and families through these processes, and my own life experiences enrich my capacity to empathize and be of service to others.

I was born into the Muslim Faith, and then for years was a practicing member of the Baha’i Faith. More recently, I’ve been practicing shedding labels, enriched by those ways, in addition to what I’ve learned from other paths, particularly Native American as well as Sufi teachings.

The most recent wave of protests started on December 28, 2017 and went on for nearly three weeks before they were mostly quashed by the Iranian government. At least 21 people were killed and roughly 3,700 arrested by the government forces. A majority of those arrested were under 25 years old. Since the start of the December protests, women have taken a particularly active role in protesting the oppressive regime. In particular, many women have followed the lead of Vida Movahed, the 31-year-old courageous protester, who has become known as the “Girl of Enghelab Street” by taking off her headscarf in public on a street in Tehran in December. She was arrested and detained for several weeks before being released from custody, and 30 other Iranian women have been arrested since for a similar act.

The median age of Iran’s population is at an all-time low of 29 with a staggering literacy rate of 98 percent for those between age 15-24. Not only that, but the age of the internet, despite the regime’s attempts to minimize access, has opened the eyes, ears and minds of the people. For too long, many people were brainwashed to accept the oppressive regime without questioning or looking for a way out.

I watch the protests of the empowered people, and particularly the women, with cautious optimism. I stand which each of them whom I see as my sisters, speaking up against oppression the same way my mom did. Many of us Iranians living outside Iran continue to have only an unspoken dream of returning to our homeland once again. We wonder whether Iran will ever be safe for all those who have fled to return. For us, the “Girl of Enghelab Street” and those who followed her example, exemplify hope for a new day. 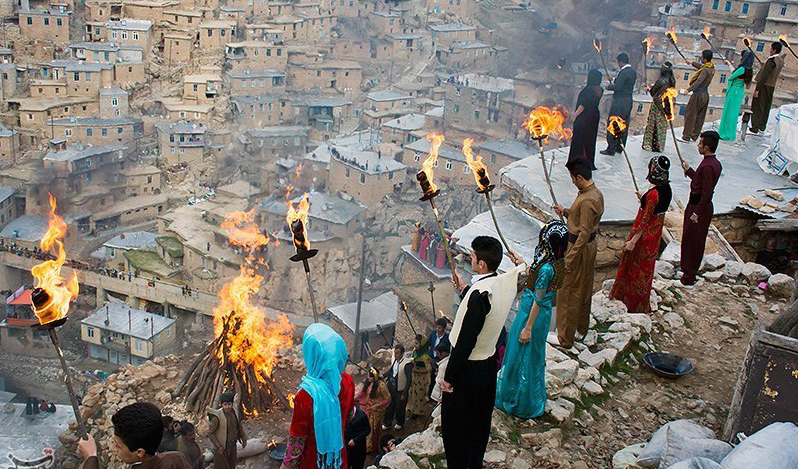