For the last few days I‘ve been trying to process why Kobe Bryant’s death has brought me to the verge of tears multiple times. Like many people, I heard the news through text on Sunday, just after 11:45 a.m. and before any major news outlets had confirmed it. At that moment it seemed as if the entire city of Los Angeles, my current home, collectively gasped, and since then I have been struggling to find words to describe why both NBA basketball and Kobe Bryant’s place in it mean so much to me.

How does one begin to describe a journey that started when a shy, awkward seven-year-old kid from Pakistan, new to America, sees a Muslim name on the back of the jersey of the starting center for the Lakers? I may have become a Lakers fan because of Kareem — who will always be my favorite player — but Kobe has defined the Lakers for most of my adult life. During that life, and especially at its lowest points, I’ve always been able to count on basketball — the Lakers and Kobe — to give me a few hours of distraction from the mundane and profound pressures of life.

It was during the lowest point in my life, when I was deeply depressed and isolated, that I went to my favorite sports bar in Brooklyn to watch Kobe’s last game. I went alone. Not because I was avoiding my friends, but because, like countless times before, I knew that I would have no trouble striking up conversations with complete strangers. Half Court, now closed because of gentrification, counted on Sundays packed for NFL games to make rent. NBA was always an undercard. I mostly went on weeknights to watch basketball. Many of those nights my only company was a whiskey soda and the bartender who poured my drink. However, if the stakes were high enough, the bar would attract diehard and casual basketball fans alike. On those nights I could usually count on bellying up to the bar and making light conversation with whomever was sitting next to me.

The bar was full that night. The Warriors, playing at the same time as the Lakers, were on the verge of winning their 73rd game and surpassing the single season win record held by the 1995-96 Chicago Bulls. Kobe’s last game was a meaningless one: no playoff implications, no facing off against some hated rival, no historic streak on the line. Just a man ending his career.

I don’t remember who I talked to or what I talked about that night but I do remember that by the fourth quarter no one was watching the Warriors game. And with a little over 30 seconds left, as Kobe put an exclamation point on another historic scoring performance by hitting the go-ahead field goal, the entire bar was chanting Kobe’s name in unison. I can only recall one other time, in all my experiences at Half Court, when all the patrons were unified in rooting for the same cause. It was the US men’s hockey team beating Canada in a must win group match during the 2010 Winter Olympics. The stars of very few celebrities, let alone athletes, burn so bright as to demand the attention of an entire nation. Kobe Bryant, without the benefit of nationalism, accomplished that in his final game and he did it again a few days ago with his untimely and tragic death.

Much has been written over the last few days about how much happier Kobe seemed in retirement. For a man infamous for caring only about winning on the basketball court, the happy post-retirement Kobe can be viewed as a conundrum. Kobe’s prodigious skills were not as great as LeBron’s nor his athletic ability quite the match of Jordan’s. Hence, no player was as self-conscious in projecting the image of a demigod as Kobe. His on-court hubris was clearly calculated to buttress his claim to the title of the greatest of all time. Kobe, self-aware and intelligent, must have known his public persona was as much performance as it was real. His career — as great as it was — fell short of the greatest of all time and is already surpassed by LeBron, even if it won’t be by many others. Robbed of his last productive years by a devastating injury, I’m sure Kobe unburdened himself of that ambition and applied his dogged work ethic to his post-retirement endeavors. Sadly, this raises the very real, dark and distressing possibility that the hubris that served Kobe so well on the basketball court tragically caught up to him on an extremely foggy winter morning in Los Angeles. A morning when even the LAPD, the most prolific partisans of helicopters, grounded their fleet.

Even under the most forgiving light, the promise of professional sports is a quixotic project. The contradictions of capitalism have littered the landscape of professional sports with false claims of unity, economic development and good jobs. Nor is it a very profound insight to point out that sports are as impacted by patriarchy, sexism, anti-queerness, and racism as much as, if not more than, the rest of society. The clearest crystallization of how oppression operates in our society can be seen through the prism of sports. Invariably the legacy of any athlete — and Kobe Bryant is no exception — will be complicated by these forces. As someone who has dedicated my life to fighting injustice, it is particularly painful to concede that I grieve more for the death of an admitted adulterer and accused rapist than I felt empathy for his victim, but these are the contradictions we are forced to navigate under patriarchal capitalism.

The analytical side of my brain, which is also the social justice side of my brain, has always viewed basketball — and sports in general — through such a cool and measured light. But leaving my relationship to basketball at that would be a dishonest assessment. My connection to basketball, the Lakers, and Kobe runs much deeper. Built on the foundation of recognizing a name on a Lakers jersey, the arc of my life is dotted with moments connected to my love of basketball that are both profound and mundane.

Until I moved to New York City after college, I lived what I consider an itinerant life. Partly because of my shy disposition but mostly because of my history of migration, I have always felt liminal and a little alienated no matter where I am living. However, two deeply held passions, outside of my family, have given me a sense of rootedness whether I am in Karachi or Los Angeles — my work in leftist politics and my love of basketball.

I was born in Karachi but I spent my formative years in Austin, Texas, where my mother raised me and my brother while getting her PhD. I became a Lakers fan during my time in Austin when the Showtime Lakers won back to back championships in 1987 and 1988 and since then my affections for the Lakers has never wavered. As a child in Austin, I was painfully shy and self-conscious, especially in school, but I would also spend hours pretending to be Kareem outside the laundromat while shooting into at an imaginary hoop at the top of the stairs that led to the front door of the laundromat. After the seventh grade, I moved back to Karachi and lived there until I graduated from high school where I played on the basketball team for many years. Nobody on those teams, including me, was particularly good or athletic. Our only talent was that we were mostly expatriates and thus had played organized basketball before.

In the 1990s, there were only a few basketball courts in Karachi but I knew where all of them were and I played pick-up games on many of them. Running layup drills with my late mentally-ill father on these courts are some of my happiest memories of him. In fact, I had just returned from a pick-up game when I learned of his suicide in 1996. The purest form of basketball is played on a pick-up court. It doesn’t matter where you live, you can always find a court and find people willing to spend a few hours shooting hoops with a stranger. This is as true in America as it is around the world. Unlike the other American sports baseball and football, the grammar of basketball is global, one in which it is possible for children in even the working-class neighborhoods of Karachi to practice no-look, behind-the-back passes wearing flip flops. That is why, despite my failing joints, I continue to ignore my doctor’s orders and take my weekly communion on a basketball court.

After high school I moved back to America for good, right in time to witness the star of Kobe Bryant rising. Kobe is 13 days younger than me. This is not particularly noteworthy, except that it means that Kobe started playing for the Lakers just when I started college and the majority of my Lakers fandom since has been spent rooting and defending Kobe as a basketball player. While my politics did not mature until after I graduated from college, my love of basketball and the Lakers always connect me back to my childhood and it runs through many friendships that crisscross the globe.

Through inside jokes and dumb arguments, many of them about Kobe, in the living rooms and bars where I have watched basketball, and through the many pick-up games I’ve played over the years, I, a shy Muslim immigrant, have found pockets of acceptance in an otherwise hostile country. For the past 24 years, for better or worse, Kobe Bryant has been synonymous with that world. One day this world will revolve around other players, but right now every time I try to imagine this world without Kobe I have to hold back tears.

As I sit on a plane, on my way to Iowa for one last push to add union rights to the agenda of the Iowa caucuses, I glance at snippets of Kobe’s playing career on the tiny TV screen showing Sports Center. My mind wanders through the many memories and arguments that have been spurred by Kobe Bryant and the Lakers. I think of that morning in June of 2000, getting up at 4 a.m. in Karachi to watch the Lakers play the Portland Trailblazers in game seven of the Western Conference finals and waking up my entire family when a Kobe-to-Shaq alley-oop iced the Trailblazers in one of the greater comebacks in sports history. A dunk literally heard halfway around the world. I remember being torn when Shaq was traded during Shaq and Kobe’s acrimonious divorce and the countless times I have been called a Kobe stan by friends lecturing me on the importance of advanced stats even though I am the one with a graduate degree in math. But I keep returning to the night of April 13, 2016, sitting with a few dozen patrons in a sports bar in Brooklyn, chanting Kobe’s name for no other reason than the joy we felt at watching a self-made demigod impose his will on a silly basketball game one last time and for a few hours I was once again provided an escape from my own despair in communion with strangers. 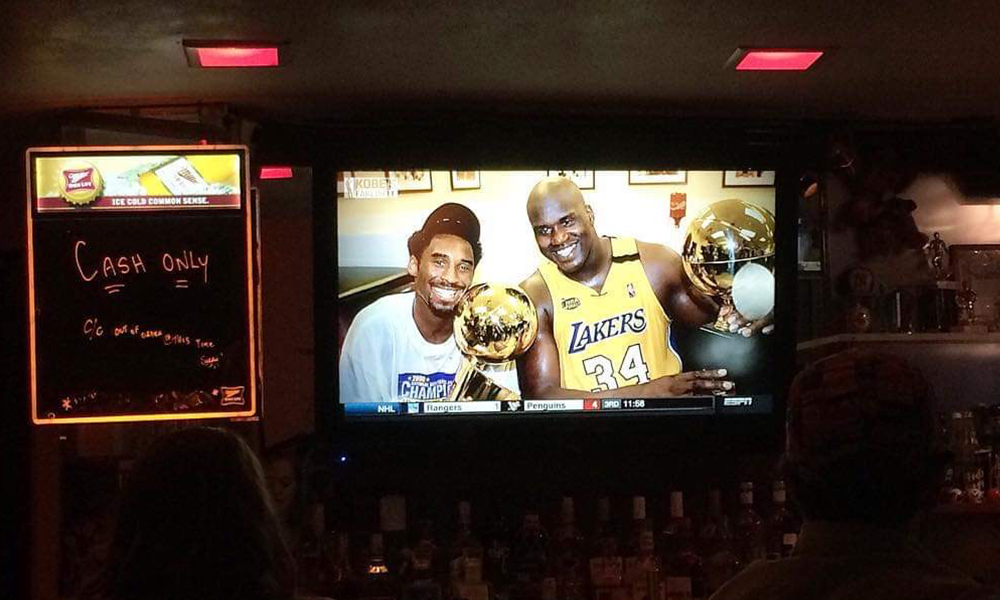