The National look like they sound: they are harbingers of white, male, middle-age malaise. But in their dexterous hands, mid-life crisis has never sounded so good. They’re a quintet: one pair of brothers, one set of identical twins, and Matt, the lead singer. They’re all from Cincinnati, and they’ve been doing this for almost 20 years.

Over the course of seven albums and two EPs, The National have refined their sound considerably, buffing the lyrics and burnishing the rhythms — so much so that their latest album, Sleep Well Beast, earned them a Grammy, the ultimate symbol of mainstream digestibility. I entered their world when they released their fifth album, High Violet, and had fine-tuned their formula to near-perfection. Describing any piece of music as formulaic is usually meant to be derogatory, but The National’s consistency — the lyrical patterns they sew and the sonic landscapes they frequent — is what’s kept them so good and made them so easy to love.

Formulas, if followed correctly, require precision. The National’s instrumentalists make their careful musicianship look facile, spontaneous. But it took time to achieve that effortless precision, to perfect the formula. I listen to their first, self-titled album. It’s almost 18 years old now, anchored by generic strummy guitars and spangled with slipshod harmonies. Most disappointingly, Berninger hasn’t yet discovered the delicious depths of his lower register; his vocals strain a bit. Traces of the band’s best selves are palpable, but unrealized.

Then, six years and two albums later, the mechanism clicks and locks into place on Boxer. The National, as I know and love them, are born in 2007, and they’ve been doing everything right ever since. Their most notable evolution is Bryan Devendor’s drumming. Devendor’s brother Scott, the band’s bassist, describes his style as “machine organic;” the band’s producer says Devendor “has an almost aggressive precision, but without sacrificing feel.” These assessments aptly describe the band’s percussive style, but they also encapsulate the band members themselves: they’re artists that work in constant tension. With Devendor on the drums and Berninger on the mic, the band actively negotiates forethought and impulse, refinement and rawness.

“When I walk into a room, I do not light it up / Fuck,” Berninger bellows, cradled by the lush, balanced instrumental of “Demons,” off their 2013 album Trouble Will Find Me. This is what The National do best: Berninger mines the depths of his psyche while the rest of the band nestles him in tight, dense, glossy accompaniment. Wandering stream-of-consciousness lyrics grind beautifully against meticulously arranged instrumentation. Here’s a verse I love from “Conversation 16” from their 2010 album High Violet. The lyrics, scattered and tortured and talk-sung, float above grounded, steady percussion and full, simple guitar:

I am jarred by how much I understand him. (You really would never believe the shitty thoughts I think — they’re just so shitty. And disappointing people? That’s a proposition that keeps me up at night.) But I am also taken with his vulnerability, by how willingly he shares his fears and how honestly he loves. When Berninger offers these kinds of confessions, I want to reach through the dense music and hold him. Thankfully, the music’s stability — like clean and perfect scaffolding — keeps him safe from himself.

A friend of mine recently asked me, as I was playing selections from Boxer during a drive across the Bay Bridge, how I can stand to listen to The National for so long — they’re so gloomy. Initially, I was surprised by this impression — gloomy is not the first descriptor that springs to mind when I think of the band.

Reading Berninger’s lyrics in silence is a truly somber exercise, something I didn’t realize until I tried it myself. His thoughts can be as inscrutable as they are depressing. “You and your sister live in a Lemonworld / I want to sit in and die,” he mumbles on one track. I can only guess what a Lemonworld is, but his pain is lucid. In another song, he surrenders himself to sadness: “Sorrow that put me on the pills / It’s in my honey, it’s in my milk.” On an earlier album, he’s uneasy and disturbed, confessing, “I’m having trouble inside my skin / I try to keep my skeletons in.”

What I glean from Berninger’s lyrics is not so much gloom as it is honesty, a profound candor that he’s saved just for me, someone who knows what he means without further explanation. And once his secrets are buried by such lush, propulsive accompaniment, they’re sapped of some of their melancholy. But I suppose the distinguishing factor in the band’s gloomy sound may be Berninger’s deep baritone. The rumbling, languid voice that launched a hundred think pieces, described as everything from “slurring” to “sonorous,” is understandably divisive; he can really only moan or shout, almost always in some kind of pain. Yet where one may hear misery, I hear sincerity. I hear dusky, tender beauty.

I’ve seen The National three times in four years. They don’t change much with each new venue or each passing year. Every time we reconnect, they are just as I left them but a little bit wiser, the same and better at once.

Onstage, Berninger always has a drink in his hand. I’ve wondered often what’s in the cup he’s clutched at all the shows I’ve been to. I think it might be wine; twice he’s thrown the cup high above his head to let its contents explode in the air, and twice the exploding liquid has looked like a crisp, white wine.

Although I know him so well — his fears about fatherhood, his tumultuous marriage, his social anxiety — Berninger baffles me as a performer. He’s so selfish and so generous: he ignores us for long stretches, then the next moment, he will literally hand his body over to us, flinging himself into the audience to drift on a sea of steady hands. He seems to scoff at the tacit social contract between performer and audience — he goes on weird tangents and sings mostly to himself. When I saw him at Panorama, a festival in New York City, he was drunker than I would have liked; it created too much space between us. But when each song began and he grabbed hold of the mic, he sang with vigor and intention and, yes, total precision.

He also doesn’t believe in a performer-audience barrier. At the Greek Theatre in Berkeley, an 8,500-seater, he jumps off stage and lumbers into the crowd, wandering up the aisles and down the rows. He takes a man’s phone and starts filming himself as he tools around the amphitheater. He returns to the stage, brisk but relaxed: “If I take your phone, you’ll get it back. Promise.”

I find Berninger impossible to shake, especially on the warm summer nights that I see him in person and he tells me his secrets. He’s always so comfortable up there on that stage, so indifferent to my presence. But I can tell he wants me to enjoy myself. That’s why he ended our night at the Greek with a venue-wide singalong of “Vanderlyle Crybaby Geeks.” He glided through the crowd and led us in anthemic prayer:

All the very best of us / String ourselves up for love.

Berninger understands self-destruction better than most people I know. That’s why he doesn’t judge it. That’s why we feel so safe singing along with him. Even the best of us, we all admit in unison, have strung ourselves up — humiliated ourselves, hurt ourselves, lost ourselves — for somebody’s love.

Love is a common word in Matt Berninger’s vocabulary — it’s something he has an abundance of, a fact he admits openly: “Everything I love is on the table / Everything I love is out to sea,” he sings on “Don’t Swallow the Cap.” He continues: “Tiny bubbles float above me / It’s a sign that someone loves me.” Maybe that’s why he ended our night like that, with such an intimate and communal ritual. Maybe it’s a sign that he loves me. 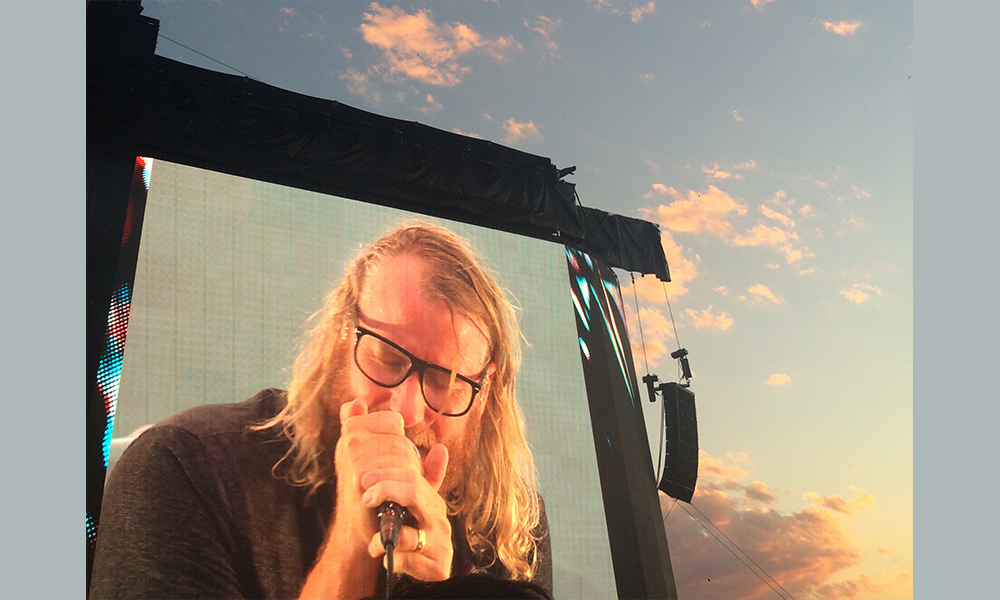