This is an essay about My Favorite Murder, a podcast.

Several big things happened to me in quick succession, as they tend to do. I got an academic job and decided to move from Southern California to Maine. My long relationship ended. I got a dog. I went to San Francisco, my boyfriend moved out, and I returned home to a half-empty apartment. Three days later, on June 1st, there was a shooting at UCLA, the school where I had learned and taught for close to a decade.

It was my last day of classes. I had brought my new dog Millie to school with me. One of my students brought her partner and her baby to class to meet me. She had taken three of my courses; we had grown close. In class, we were going to talk about Nathanael West’s Day of the Locust, how nothing (in LA) is real, how the most dangerous thing in the world is a crowd of people hungry for entertainment. In my modern American poetry class later that day, I had a lesson planned on Gwendolyn Brooks’s “kitchenette building”: “We are things of dry hours and the involuntary plan, / Grayed in, and gray.” Both classes were to be about dreams, the dreams we give up, the dreams some of us don’t get to have. I was feeling expansive and sad, and I wanted my classes to be expansive and sad.

I didn’t get to teach either of these classes. A few minutes before my modern American fiction class was to begin at 10 a.m., my students and I received alerts about an active shooter on campus. We motioned students in from the hallway, barricaded the door, and used Millie’s bright pink leash to tie the door hinges together; the door had no lock. We turned off the lights and sat on the floor. My student’s baby cried, and a number of my students cried. Some students were visibly nervous about the baby crying. I have a photo taken seconds before we received the alert: my student holding her little girl, glowing.

We waited in the dark. Phones buzzed constantly. Students shared hushed and strained and sometimes high-pitched rumors. Most of them turned out not be true. I felt quiet, helpless. I had a protective instinct and nothing to do with it. My students looked to me and I didn’t know what to say. I offered them my dog, who is small and fluffy and warm. We eventually learned that there was no mass shooting, no four groups of gunmen stalking the campus as we had heard. But a few buildings away from us, Professor William Klug had been killed by his former student, who had then killed himself.

We left the classroom two hours later. An hour after that, I lost it in my car in the UCLA parking garage.

Karen Kilgariff and Georgia Hardstark get together once a week to talk about murder. They each come prepared to talk about a particular murder or murderer (think: the case of JonBenét Ramsey, the story of the nightstalker Richard Ramirez, the tale of Albert Fish, turn-of-the century cannibal). They talk through the details of the case: the murderer him or herself, the victims, the investigations, the trials. They interrupt each other, they gasp, they say “fuck” a lot. Georgia sometimes emits what can only be called a squeal of horror.

I should say now that this is a comedy podcast. It has reached #1 on the iTunes comedy podcast chart. At this moment, it is at #3.

The show is wonderful and uncomfortable, depending on your comfort level re: talking about murder. Karen and Georgia do research for their show, but they take this research lightly. They make mistakes. (They have a segment called “Corrections Corner.” It is a highlight of the show.) They throw around clinical terms lightly, make unsubstantiated claims, wonder and ponder about the fuck-up-ed-ness of people, play armchair psychologists to killers like John Wayne Gacy and Richard Speck. Their sense of gallows humor is outstanding. As someone who makes a living researching things and then telling other people about them, I sometimes recoil when I hear the way they talk about historical events, events that take place on actual days and in actual places and involving actual people.

But I don’t listen to My Favorite Murder for facts. Karen and Georgia like to remind their listeners: “If you came here to learn, you’re in the wrong place.” I listen for the feelings. Karen and Georgia are here to spend an hour per week dwelling in horrors, to confront themselves in certain dark places, to wonder what they would do in similar situations, to talk expansively and to offer pithy advice, mostly for potential-victims, occasionally for would-be murderers:

You can now buy t-shirts, tote bags, and mugs emblazoned with some of this advice.

I have listened to other true crime podcasts: Serial, of course, and Criminal. The “Charles Manson’s Hollywood” series on You Must Remember This is everything a true crime story should be. And I have long been a fan of certain kinds of scary stories. As a child, I progressed quickly from Goosebumps to Fear Street to Christopher Pike to Agatha Christie to Mary Higgins Clark. Today, I love a British procedural, especially if it involves a troubled (aren’t they all?) lady detective in a northern town. (I’m looking at you, Scott & Bailey, Vera, Happy Valley.) I have lain in bed late at night listening to Tana French’s Dublin Murder Squad series on audiobook, and I was captivated by The People vs. OJ Simpson. I felt close to that show in particular, as a west-side Angeleno, as someone who had once been hugged by Cuba Gooding Jr. for almost no reason in a Ralph’s deli line one morning.

The list of my crimes goes on. Maggie Nelson’s Jane: A Murder, and its follow-up, The Red Parts. Broadchurch. J.K. Rowling’s Cormoran Strike novels. Are crime stories having a moment? Or have they always been having a moment, and I am just more aware of it now?

I have read a lot of Freud, and I know all about repetition compulsion. I have taught trauma theory. But a theoretical framework means very little when you are waking up at 5 a.m. and bingeing a murder podcast in which two horrified, fascinated, repelled, triumphant, anxious, funny women are talking about how they talk about murder so that they won’t, themselves, get murdered. How they know it’s magical thinking, how knowing the ins-and-outs of killers of all stripes — mass murderers, angel-of-death nurses, the occasional murderer-suicider — won’t do you any good. Sometimes, Karen will recount a story cribbed from the I Survived TV show, which at least features a survivor. And then there is the pithy advice: Stay Sexy. Don’t Get Murdered.

But more often than not, Karen and Georgia will end the show subdued, no longer laughing, more than a little disgusted with the paths they’ve led themselves down. The podcast is Freud’s game of fort/da; it is a way of managing and confronting emotions, of expelling horror and then asking to brush up right against that horror again. In more recent episodes, they’ve begun to end the podcast by talking about one good thing that’s happened to them that week. Their hearts are rarely in it. Post-election, especially, it all feels pretty grim.

Crime is different for me now. When I was young, and I had no understanding that I was living an astonishingly violence-free life, reading books about terrible things seemed like a way of learning about the grown up world. Now, the crime genre seems like another perspective on something I have encountered asymptotically: fear, paralysis, unknowing, with a baby and a fluffy white dog in a dark classroom in my last day of my old life in another part of the country very far away from where I am now.

Things I do now: check exit signs. Note which classroom doors lock. Think about buying pepper spray. Every time I get into an Uber (which is not that often, as I live in rural Maine), I have a moment of thinking: well, this could be it. Same goes when I don’t like the way someone is looking at me. Well, this could be it. It’s not that I haven’t always felt this way, it’s just that now I feel this way more. I don’t worry about planes crashing, I think a lot more about slipping on black ice than I do about another school shooting. Still, I know about the doors.

My Favorite Murder feels like a support group for anxious people who are calmed, if not satiated, by the knowledge, or something approximating knowledge, of the worst things that can happen to individuals with small lives, perpetrated by individuals with small lives. The horrors are at a comprehendible scale, which is to say, the victim numbers are small (even when they are not small). The appeal of My Favorite Murder is that the violence Karen and Georgia discuss is so localized and embodied.

Karen and Georgia and their favorite murders say: this is where the evil is. They allow me to say: this is where the evil is. How nice it is to have a terrible world wrapped succinctly in the package of a paranoid schizophrenic, abused by his parents, who suffered a head injury. There are causes and there are results, and though the results are murder, we can make sense of them. There are no forces of globalization to consider, no histories of systemic oppression. In the podcast, there is very little history at all. In the murders, there is no Trump.

Georgia and Karen often say that they want to honor the victims of violent crimes and tell their stories, but in practice, they usually don’t. I don’t mean this as a critique. No one is listening to My Favorite Murder to learn about nice little 10-year-old girls who love drawing and playing basketball. We are listening for an embodied horror that we can explain and understand. That we can contain. There is something refreshingly unabstract about serial killing. It is visceral and horrible and we can all agree and we can point at it and say, in unison: this is wrong. The power of this podcast and the community it has made is that we can all in unison claim the wrongness of Ted Bundy. The fantasy of My Favorite Murder is something I need.

The shooting at UCLA had nothing to do with me, but it is now a tiny part of me, the part of me that sometimes wakes up at 5 a.m. from a dream about being paralyzed in a dark room with a small fluffy dog and a crying baby. The part of me that, before getting out of bed into a cold Maine morning, hits play on My Favorite Murder. Karen and Georgia help me contain the horrors, and then, momentarily, help me imagine that they can stay contained. 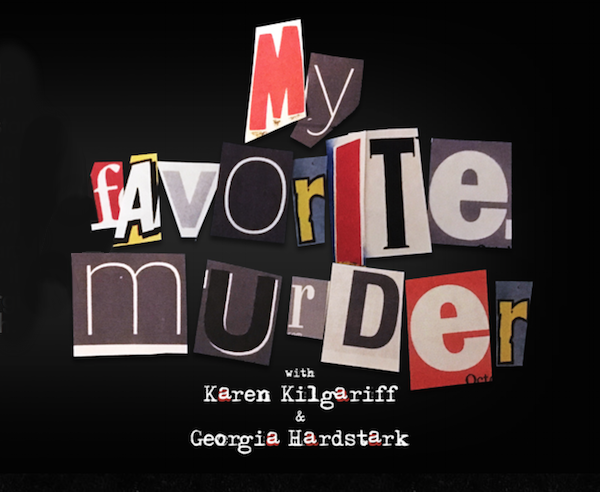