“It’s so mean that I can’t fuck the moon,” Melissa Broder tells me on the phone. We’re discussing her debut novel, the Pisces, in which her protagonist fantasizes about getting carnal with palm trees and the crescent moon. Anyone familiar with Broder’s Twitter feed, @SoSadToday, her Vice column and essay collection of same name, or her poetry collections Scarecrone and Last Sext, will recognize Broder’s lust for the unattainable. As @SoSadToday once tweeted: “i came, i saw, i got emotionally attached to unavailable people.” In The Pisces, Broder revisits this theme through her protagonist’s romantic tryst with a merman.

For nine years, Broder’s protagonist Lucy has been in Phoenix writing her PhD dissertation on Sappho, a famously fragmental Greek poet: most of her work is now lost. After a bad breakup, Lucy moves to Los Angeles for the summer to dog-sit for her sister. Lucy joins group therapy for love addiction and embarks on a bleak Tinder spree, but finds little respite from the great weight of existence. Lucy yearns to fill the void left by her mother’s death, a void symbolized by Sappho’s missing poetry. While lingerie shopping, she imagines joining “Sappho’s all-female cult of Aphrodite.” “I craved that nurturing,” she thinks to herself. “But I was afraid to ask women for it, afraid they would die or reject me in some other way. So I looked for it in men who could not give it.” Because her crushes are mere fantasy, Lucy finds more pleasure preparing for the dates — in activities ranging from buying clothes to cleaning her ass — than she does with the men in real life. While reading I thought of a drawing I saw on Willow Smith’s Instagram, on which a witchy woman’s vagina tells her: “You’re just using the idea of him to fall in love with yourself again.”

On the phone, Broder introduces me to the concept of “limerence,” a biochemical process that produces euphoria during the early stages of love. This is why they say “love is a drug,” she explains. The euphoria typically begins to normalize between six and 24 months into a relationship. But if you’re with someone emotionally unavailable, Broder tells me, someone “who is not the nicest and always keeps you on your toes in a bad way…then you can sustain that addictive limerence quality.” When you’re truly intimate with someone, Broder explains, it’s not going to feel like a drug.

“Is that depressing to you?” I ask.

When Lucy falls for Theo the merman, the narrative drifts into magical realism and gives life to Lucy’s insatiable appetite for projection: “How empty was I that I needed a border drawn by someone else to tell me who I was? It didn’t even matter whether the person was real, a lover, a new friend, or even a dog […] Seeing myself through the eyes of a projection […] was like a box in which to live: a boundary against the greater nothingness.” As Broder wrote in her 2015 essay collection So Sad Today, “My sexual preference is me. Actually, escaping me.” The Pisces likewise depicts a woman projecting both the good and the bad aspects of herself outwards in an effort to avoid the reality of herself, much in the way the Greeks created myths.

“I’ve never been super into mer-creatures,” Broder tells me on the phone. “If I could choose a mythological creature, it would definitely be something more horse-related. Like, not to fuck. But just, you know. A pegasus probably. That’s probably the mythological creature I’d want to chill with.”

Broder chose a merman as the object of Lucy’s love after reading Giuseppe Tomasi di Lampedusa’s “The Professor and the Siren,” a short story about a man’s relationship with a mermaid. Broder was sitting on the beach in Venice, where she used to live, and where Lucy lives for most of the novel. Watching the waves, Broder began thinking about the history of stories about men and mermaids. “Men are always walking off the back of ships for these mermaids,” she said. “And they’re sublimating themselves into the ocean for love. And it’s like death for love.” Anyone familiar with Broder’s work can understand why this notion seduced her; as expressed on @SoSadToday: “i either think about you or think about death.” In a characteristic opposition of convention, Broder reversed the gender roles and wrote about a woman and a merman. (It’s worth noting that the The Pisces comes out the same year that The Shape of Water won Best Picture for portraying a woman’s relationship with a fish-creature, with whom she sacrifices her life and returns to the ocean for, well, love.)

“I think Lucy is pretty hetero,” Broder tells me, but she does not deny the novel’s queerness. “I think there is an element of looking at men from a non-binary perspective. Like when she’s fucking Theo, it’s regardless of gender.” She continues: “it’s like two halves of a whole, but it doesn’t matter who has which part.”

The cultural zeitgeist tells us things are either one way or another. They are black or white. Hot or cold. Good or bad. Art — successful art — tells us that multiple, seemingly contradictory things can exist at once. This polarity is a common thread in Broder’s work; at one point, Lucy thinks to herself: “So many things were both true and a lie, depending on how you felt in the moment.”

The novel depicts a similar tension regarding Lucy’s relationship to popular therapy trends. Like Broder herself, Lucy suffers in a way that makes it necessary for her to try everything — therapy, medication, new age healing. But she’s also smart enough to see through the cracks, like when Lucy decides her therapist is stupid for continuing to quote E.E. Cummings, and when she realizes that her crystal is just a rock. She mocks terms like “self-dating” and “inner-child work,” and at one point concludes: “I did not want to do any more connecting with myself.” When I ask Broder about this tension, she tells me about a former therapist who wasn’t really doing it for her. She thought to herself: “Compared to death, she’s like a hairbrush.”

At one point, Lucy envies a couple for their seeming ease with existence: “If they had tasted the nausea of not knowing why we were here or who we are, or if they had not, now they were wilfully and successfully ignoring it. Or maybe they were just stupid. Oh, the sweet gift of stupidity. I envied them.” When I mention this scene to Broder on the phone, she’s quick to avoid judgment. “We’re all at some points in our lives those people.” She pauses. “When I’m at Sephora, I am those people.”

The worst feeling, Broder explains, is to look at the world and go “fuck, this is all real. That is so scary.” She calls this being “unable to lift the veil.” At one point in the novel. Lucy looks at her friend Claire from group therapy, sees her own dysfunction, and begins to spiral. Reading The Pisces mimics this feeling, the same one that @SoSadToday’s 626,000 followers know well. I tell Broder that to read her work is to feel: “I’m not alone, but also I’m terrified of who I am.” It’s tempting to read it feel depressed. Not only by her suffering, but by our own reflected back at us.

But there is light at the end of the spiral.

“This is a book that very much believes, as I believe,” Broder tells me, “in the power of women to save your life.” Ultimately, Lucy lifts the veil and survives by forming genuine bonds with the women around her, by creating her own DIY cult of Aphrodite. In among the novel’s most powerful scenes, Lucy is able to nurture herself without the drug of romantic obsession simply by playing with her sister’s hair. And it is in seeing herself in Claire that allows Lucy to accept herself and, ultimately, change. “There is a profound power when women are honest with each other,” she tells me. In following Lucy — charming, candid, and hilarious in a way Broder is herself — the reader gathers courage to take on the daunting but critical task of looking honestly within and moving towards change. 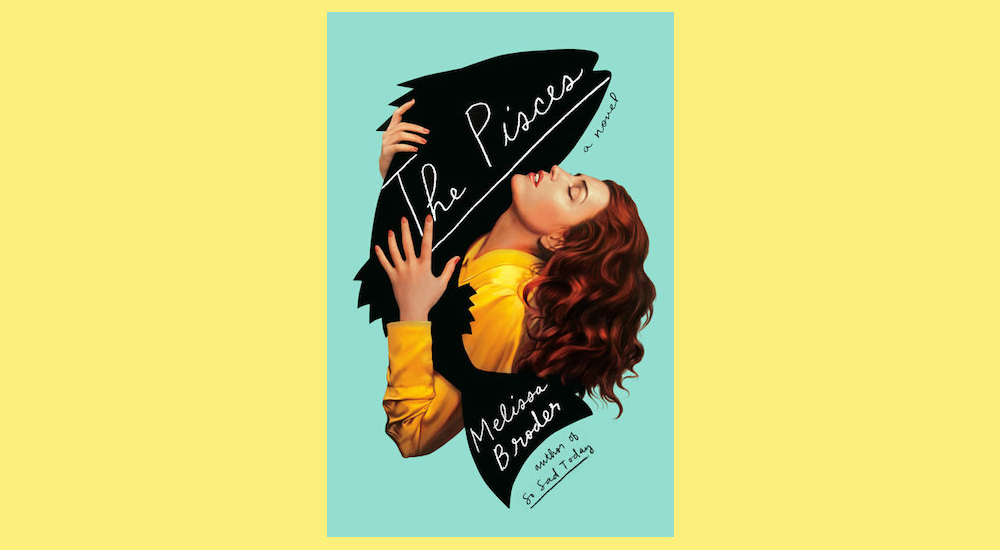