Sure, you could say that the process is rewarding — but it’s equal parts excruciating. You divulge your insecurities, every character flaw and body part you’d rather will away. You exhibit your fears in high-definition. You’re held to a standard nothing short of judicial: the whole truth and nothing but the truth. Then you field questions from some schmuck who knows nothing about you, except for all of your childhood traumas.

But it’s not therapy. Far from it.

T Kira Madden has just returned from a 24-city book tour. She traveled the country to promote her debut memoir, Long Live the Tribe of the Fatherless Girls. Now we’re sprawled on her living room rug, and although we just met 45 minutes ago, from her book I could tell you: the story of her first kiss, the story of her first assault, the torments of her grade school bullies, the torments of her teenage crush. Her mother’s struggle with crack. Her father’s struggle with crack. The date of her father’s death.

Which is perhaps why it takes me almost an hour in her home, spewing questions on grief and exes, to realize that she’s tired. Not just tired, but emotionally sore.

“It’s been like therapy ad infinitum,” Madden says, of the responses to her tell-all book. “I have to talk about my mother’s overdose constantly, my sexuality constantly, my father’s absence and neglect.” It doesn’t feel entirely healthy. “I’ve had to create this removal of sorts, almost like disassociating from my body as a means of self preservation.” Every question that Madden’s asked, she rips off the Band-Aids; she pours on the iodine of exposure and analysis until she can no longer feel the sting.

Reading Madden’s coming-of-age memoir feels like pillow talk. Like you’re in bed and she, chin propped in her hand, asks you: Want to hear a secret? Yes, in fact, you do. You hear the electric pulse of her first queer relationship, the prickly pain of a parent swallowed up by addiction. You find your own stories, too — in the lifesaving force of female friendships, in the tender reach of siblings who grow distant, and then close, and then closer still to make up for lost time. It’s sort of the way that I imagine the pubescent boys in my Jewish high school felt discussing Philip Roth. It’s no small thing, as a reader, to feel seen.

In a word, it’s catharsis. It’s every scar you wanted to re-trace, every bruise that you needed to press down on so you could feel that hot, slow ache. Whatever you call the opposite of being numb.

Between Madden’s book and works like Roxane Gay’s Hunger or Leslie Jamison’s The Recovering, you could say we’re in a golden age of memoir. But given our cultural tendency toward over-exposure, it can be easy to take this raw honesty for granted. We’re all tweeting our every thoughts, handing Facebook heaps of our data, barely shrugging when celebrities leak their nudes — why shouldn’t authors be expected to get naked on the page? Then we can deconstruct their lives the way we close-read William Faulkner or Richard Yates: Who is the main character’s foil? What’s the meaning of the rape?

What we don’t talk about, though, is the wounds inflicted when we write about our wounds. Or really, when we publish that sort of work. For Madden, writing itself is restorative. The magic of memoir comes in the moment when a memory moves beyond the plane of practical experience; she sees it through the filter of prose and it becomes ethereal, abstract, almost shimmery in the light. But the dialogue around her writing, that’s something else.

Leslie Jamison tells me that when she first began writing deeply personal nonfiction, she felt the need to answer every interview question asked about the experiences behind her work because she had this nagging sense that she’d started it all — that ugly-beautiful process of self-revelation.

“There’s a fantasy of access that can reduce the art,” Jamison says. “I’ve had to develop muscles around making it clear that what I write about in my work is only a very small fraction of the truth of my life. I like to talk about the partiality and sculptedness of experience becoming art.”

I ask Roxane Gay, who has modeled for so many what trauma writing can be, how she narrates her past without opening herself to fresh pain, or over-exposure. “If you don’t have firm boundaries, you’re going to sacrifice some part of yourself that you’re not willing to sacrifice,” Gay says. “The system is designed to encourage writers, and especially marginalized writers, to ignore their boundaries. I tell my students you don’t need to cannibalize yourself.”

Ultimately, though, even the parts of yourself that you guard often end up for grabs.

Growing up, I wanted to write nonfiction but I was terrified of what I could lose packaging my emotional life into sentences. I figured that writing about your pain means you relinquish some ownership over its meaning; your fears and failures fall into the public domain. When I tried to write about my parents’ divorce — which was totally lacking in classic drama, like screaming matches and shattered glass — I bumped up against the charged line between the simple facts of my experience and the more complicated facts of my emotional response. I began to think all memoir involves some degree of self-sacrifice.

“It’s a political act,” says Michele Filgate, of nonfiction writing. She argues that the power of the personal essay is so potent it’s almost revolutionary. It gives weight to the lived experiences of people who have long been told their stories don’t belong in the canon. It means opening yourself to all the analysis of people who think they know you — not because it’s restorative, but because others might find themselves in your words and begin to heal.

That’s why Filgate gets vexed by takedowns of “the first person industrial complex.” Slapping a label like “trivial” or “navel-gazing” on a personal essay isn’t just an indictment of the form, it’s an indictment of someone’s life story. And really, it’s a power-grab on who gets to decide which truths matter. It’s no coincidence that personal essay critiques exploded just as a new generation of female writers claimed their space, the Jamisons, Gays, Filgates, and Maddens.

Alongside the criticisms, there’s also been new recognition of the need for stories of female trauma. With the #MeToo movement, we’ve seen how the women who come forward and share their experiences can transform systems of power and hold abusers to account. But memoirs like Madden’s and Jamison’s are insisting on space for something different. Not the stories wielded for a specific purpose, but those shared because they’re beautifully told and deserving of our time.

“That an event doesn’t have to be extraordinary to be worth narrativizing is something we tend to accept with fiction, but with memoir there seem to be very different expectations at play,” Jamison says. “I believe any life and set of events holds infinite potential to show us something about what it means to be alive. What makes it valuable doesn’t need to be about extremity.”

Both Jamison’s and Madden’s works insist on translating the ordinary — the stories of regular women, abused women, joyous women, women in love and in lust and in pain — into the power of prose. Even when that translation risks misinterpretation. Even when their readers will break their hearts. They dig through the banalities of life and find all the magic of a fairytale. And it’s all the more extraordinary because it’s tethered to the ordinary.

Madden is actually an amateur magician —  she can pull a playing card out of an orange, or find a penny behind your ear — and her writing reminds us that nothing is ever quite what it seems. Even in her book’s title, she calls herself “fatherless,” but tells me that her dad feels more present now as she mourns his death than in her childhood when he was often absent and high on crack. She says she always tries to “write into contradictions.” Nothing’s a stock character. Her parents, her bullies, her own teenage self have the complexity made possible by emotional truth.

Watching in Madden’s memoir as her heart breaks and then recovers, you almost wonder what you did to deserve her trust. I remember once writing a personal essay about an eating disorder for a nonfiction workshop, and once my classmates had read it I had the sudden urge to take it all back. Somehow I wanted them to earn my confession — but I realized that memoir reading affords the rare privilege of hearing someone’s secrets without any promise that you’ll reserve judgment, or even share something in return.

Facing Madden on her floor, there are a million more questions I want to ask the memoirist who, through her writings, I feel like I already know. But I’m also acutely aware of the minutes we can fill with something more valuable than examination.

“Want to hear my favorite Joanna Newsom song?” she asks, and I nod.

She crawls toward the record player in the corner and pulls out a vinyl. Newsom’s voice — sopranic, almost childlike — crackles over the turntable. The late morning sunlight fills the room with a cinematic glow. Madden begins to sing along: “I will raise my own glass to how you made me fast and expendable, and I will drink to your excellent health and cruelty, will you have one on me?” Her fingers tap the ground while she sings.

All of a sudden I feel that I’m intruding on a moment — but somehow, like her prose, the trust in her voice invites me to stay. 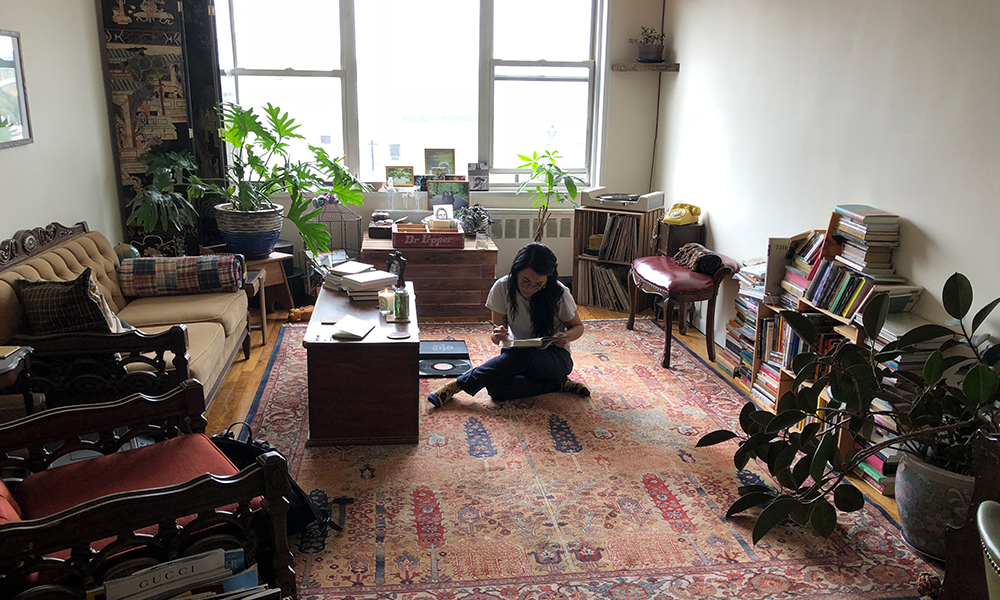