Last Friday, two tweets were posted to my feed within minutes of each other. David Duke tweeted: “Bannon, Flynn, Sessions – Great!  Senate must demand that Sessions as AG stop the massive institutional racism against whites!” (Yes, I follow David Duke on Twitter — I now follow many right wing sites, I learn more from them than I do from the echo chamber of Facebook), and the New York Times tweeted out Mark Lilla’s opinion piece, “The End of Identity Liberalism.”  In the new political climate we now inhabit, Duke and Lilla were contributing to the same ideological project, the former cloaked in a KKK hood, the latter in an academic gown.  Both men are underwriting the whitening of American nationalism, and the re-centering of white lives as lives that matter most in the U.S.  Duke is happy to own the white supremacy of his statements, while Lilla’s op-ed does the more nefarious background work of making white supremacy respectable.  Again.

Mark Lilla and I both teach at Columbia University, and I acknowledge that this is a harsh indictment of my colleague. But these are harsh times.  Lilla’s op-ed makes an argument for the commonalities between Americans, arguing that we have to move on to a “post-identity liberalism,” refocusing our attention away from identities to broader, more abstract ideas of “citizenship.” “Narrower issues,” like the right to choose a bathroom, should be worked on “quietly” and “sensitively” so as to not scare away potential allies. This argument, put simply, trivializes several generations of civil rights organizing in the service of breathing life into the dying corpse of political (neo)liberalism.  What a curious time to take up that project on the pages of the New York Times, just ten days after an election that delivered the White House to Donald Trump, an avowed racist, sexist, Islamophobic nationalist, and vulture capitalist who defeated a person who made the best, and losing, case for (neo)liberalism.  It turns out, Lilla argues, that Clinton’s loss can be blamed on the moral failure of identity politics, which “never wins elections.”

Lilla blames people of color, women, and gay and trans people for Trump’s election — a “repugnant outcome” he concedes.  By his telling, left movements have indulged a narcissistic “moral panic” of identity that has devolved into whining about trivial complaints of invisibility, exclusion, and an obsession with petty individual feelings.  This attachment to a counterproductive politics of identity and personal grievance, he argues, diverts our attention from the more important project of defending a collective commitment to a pre-civil rights-era notion of a national personality. This grander, transhistorical idea of nation is unmarked by difference and is strengthened by an attachment to shared liberal values. He argues that students, brought up on discussions of identity and diversity, have “shockingly little to say about such perennial questions as class, war, the economy and the common good” as if these forms of political discourse have nothing to do with one another. Talking about identity, or better yet status-based power, does not preclude discussions of class, war, the economy or the common good. And while Lilla grants that the women’s rights movement was “real and important” (an acknowledgement that resonates more as mansplaining than munificence), any benefits that may have been achieved by the women’s or other social justice movements, are premised upon “the founding fathers’ achievement in establishing a system of government based on the guarantee of rights.”  Last I checked, the founding fathers denied women the right to vote, the right to equal protection of the laws, indeed, even full rights of citizenship at the founding of this great nation.  It was the women’s rights movement that forced a correction in the liberal structure created by the founding fathers.  Even worse, the founding fathers both countenanced and participated in the enslavement of black people, counting them as 3/5ths of a person in the Constitution, and building a modern liberal economy on the barbaric commodification of human life.  But as Lilla tells it, this history, indeed the present facts of inequality, distort and degrade the noble purpose of American liberalism.

A liberal commitment to what we all have in common, rather than the divisiveness of “difference” or “diversity,” will set us on the right track, argues Lilla.  He lauds Presidents Reagan and Clinton’s skillful mastery of a politics of shared destiny.  If it’s liberal values that matter in this telling, then facts become less important: facts such as Reagan’s dismantling of the social welfare system or Clinton’s crime policy that resulted in the unprecedented mass incarceration of people of color.  As you read this you feel like people of color, women, and gay people are just ruining it for everyone by focusing so much on themselves and on the negative.  Come on guys: the founding fathers created a really great country! Get with the program.

Let me be blunt: this kind of liberalism is a liberalism of white supremacy.  It is a liberalism that regards the efforts of people of color and women to call out forms of power that sustain white supremacy and patriarchy as a distraction.  It is a liberalism that figures the lives and interests of white men as the neutral, unmarked terrain around which a politics of “common interest” can and should be built.  And it is a liberalism that regards the protests of people of color and women as a complaint or a feeling, ignoring the facts upon which those protests are based — facts about real dead, tortured, raped, and starved bodies.  The liberalism Lilla espouses reduces these facts of human suffering and the systems of power that produce that suffering as beside the point.  What matters are liberal values and the idea of America as a “shining city on a hill” that deserves our allegiance, not our protest.  The ways that racial inequality has been baked into liberalism through the structural disadvantage of black people found in the GI Bill, discriminatory lending policies, redlining, inferior education for people of color, and — oh right — the refusal to provide reparations to formerly enslaved people, are just glitches and not actual features of the splendors of liberal governance for the likes of Lilla.

Lilla’s evidence takes the form of a thought experiment launched while on sabbatical in France.  While he spent a year reading Le Monde and sipping espresso in cafes in Paris — all paid for by Columbia — an “identity drama,” as he describes it, was taking place in the streets back at home — in Ferguson and Staten Island where Michael Brown and Eric Garner were murdered, in Hemstead, Texas where Sandra Bland was found dead in her cell, and on streets across the country where an epidemic of murder of trans women of color was taking place.

While Lilla grants that reading about the “fate of transgender people in Egypt” may be “interesting” it contributes nothing, he argues, to our understanding of the more important issues of Egypt’s political future. Aside from blithely reducing the fate of actual people to a matter of casual “interest,” Lilla’s premise displays shockingly little interest or familiarity with the ways in which dictators use their most vulnerable populations — LGBT people, women, ethnic/religious minorities — to advance larger state projects.  Former Egyptian President Hosni Mubarak and current President Abdel Fattah el-Sisi have both used the spectacular persecution of gay men and trans women as a ploy to legitimize and strengthen the expansion of authoritarian state power to excise from Egyptian society a convenient symbol of British colonial contamination.  In fact, President Sisi’s mass arrests of LGBT people and infiltration of gay chat rooms are quite clearly the leading edge of a government effort to shut down freedom of expression and sites of resistance to authoritarian rule in Egypt — fueled by the proliferation of internet chat rooms and web sites that lie beyond the regime’s easy control.  The persecution of LGBT rights has played a key role in crushing efforts to bring about liberal, democratic reform in Egypt. The Egyptian case quite clearly illustrates the essential connection between identity politics and authoritarian governance. Thus, I read in shocked disbelief Lilla’s coy condemnation of media coverage of human rights violations suffered by transgender people in Egypt as a mere “identity drama” that “contributes nothing to educating Americans about the powerful political and religious currents that will determine Egypt’s future, and indirectly, our own.”  This statement is not only blatantly inaccurate, it displays an incapacity or worse, an unwillingness, to conceptualize power in complex ways.

To be fair, Lilla’s celebration of what he calls post-identity liberalism recognizes some merit in the work of Black Lives Matter and the gay rights movement, but a careful reader will note that any benefit they have achieved is measured by its value to people like Lilla — white heterosexual men. “Black Lives Matter has delivered a wake-up call to every American with a conscience.”  Translation: White people, aka “Americans with a conscience,” have been given a window into the reality of the daily violent racism with which Black people live. “Hollywood’s efforts to normalize homosexuality in our popular culture helped to normalize it in American families and public life.”  Translation: The LGBTQ rights movement is reduced to a plot line, (think Will and Grace), that rendered us worthy of (straight) American families’ tolerance.

Lilla closes with an homage to “the real foundations of modern American liberalism,” Franklin Roosevelt’s Four Freedoms. He recounts the sheer delight (academics would call it jouissance) at the celebration of Roosevelt’s America in a way designed to induce the reader to surrender to a familiar sentiment: “Yes, let’s make America great, like that, again!” Roosevelt’s speech in 1941 was a call to arms, providing the ideological basis for U.S. involvement in World War II.  A month after Roosevelt’s Four Freedom’s speech Bruce Tisdale, a 27 year-old African American man, was lynched in Georgetown, South Carolina by five white men who were outraged that Tisdale had taken “their” jobs at the local lumber mill.  One of the unemployed white men accused of the crime asked, “Why the white man couldn’t work and the n—- could?”  American liberalism in 1941 took little mind of the lynchings of black men or of Jim Crow segregation, just as the American liberalism celebrated by Lilla today takes little mind of the forms of structural racism that permeate the lives of his students, whom he ridicules as “narcissistically unaware of conditions outside their self-defined groups.”  Lilla would be well advised to consider the same critique of his own celebration of white liberalism.

With Jeff Sessions, we will have an avowed white supremacist assuming the post of attorney general, and we should be hyper alert to the consequences of having his ideology driving policy from that office. At the same time, scholars such as Mark Lilla are doing the more nuanced ideological work that enables the ascent to power of a man like Sessions, rendering Session’s white supremacy not only acceptable but respectable. 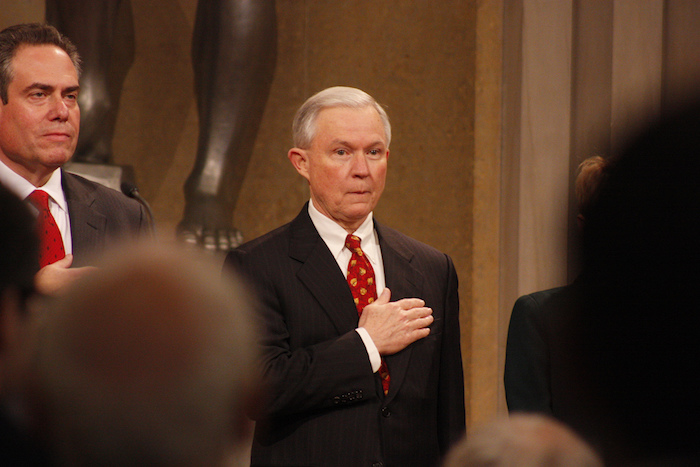