If you’re old enough to have seen the top-grossing Hollywood movie Love Story when it was first released in 1970, you may be old enough, or possibly embarrassed enough, to have forgotten whether you wept buckets when Jenny Cavilleri (Ali McGraw), the sassy young wife of Oliver Barrett IV (Ryan O’Neal), died far too soon. But you might remember the pretty white nightie she wore for the occasion, the absence of all physical evidence that she was terminally ill, and the brisk injunction Jenny addressed to Oliver’s trembling lip that he should now get busy living his life.

A handsome photograph of McGraw and O’Neal, now 81 and 79 years old, makes the online rounds as publicity ballyhoo gears up for the 50th anniversary of Love Story the film and the book. In interviews the movie’s two stars roll their eyes obligingly about the flimflam bit of dialogue — “Love means never having to say you’re sorry.” — so widely chortled over that it earned a sly lampoon by Barbra Streisand and O’Neal himself in Peter Bogdanovich’s 1972 romp, What’s Up, Doc?.

Certainly, the two leads made a glam, if sketchily drawn couple in the movie as the blond, straight-A, hockey jock Yankee with dad issues who falls for a raven-haired pleb from the wrong side of Rhode Island. Chemistry was in short supply. In fairness O’Neal and McGraw had little enough to work with in the script, written by Erich Segal in conjunction with his slim, sensationally successful novel and directed with genial goodwill by Arthur Hiller. Crisp banter is the lifeblood of movie romance, but here the ping pong backtalk plays on an endless loop of “I think I’m in love with you” (his) and “Hell no, Preppie!” (hers). For these two, love means making snow angels in the scenic Harvard Yard. It means having to face no serious obstacle until the rushed-through final 20 minutes when adversity strikes, to the tune of a plinkety-plank piano swelling to orchestral crescendo for Big Moments. Segal and Paramount surely had their eyes fixed on a burgeoning new youth market steeped in 1960s mutiny against their elders, yet for all Jenny’s saucy backtalk and Oliver’s anguished struggles with his father, the lovebirds make a strikingly conservative pair whose only goal is marriage, with a vaguely drawn sidebar of doing things their way. That’s pretty much it for plot.  By way of rebellion, love means a DIY secular wedding for Oliver and Jenny, larded with New Age platitude, in place of a traditional church ceremony. As for sex, there’s a brief glimpse of Oliver’s muscled back as he gains consent to make tender, exceedingly brief love to Jenny for the first time. If you miss that there’s always a quick sighting of Oliver playing squash in tiny white shorts.

In his day job Segal was a respected classics scholar, and the great flashpoints of classical drama — doomed love, oedipal struggle, tragic finale — grind their way through Love Story’s wash-and-wear plot. Oliver’s resentment toward his controlling father (played by Ray Milland in the movie’s lone subtle performance) hints at a promising through line, but it, too, plays on endless repeat with little development until the 11th hour. The father-son conflict received an amusing publicity boost in 1997 when Vice President Al Gore allegedly remarked that Segal, with whom he had roomed at Harvard, had based Oliver and Jenny on himself and his then-girlfriend Tipper. In response Segal insisted that Oliver was only partly based on Gore for his emotional baggage with a famous father. Mostly, he said, Oliver was based on another roommate, a great-hearted jock listed in the credits as Tom Lee Jones for a cameo as Oliver’s fellow frat boy, and the only cast member who went on to enjoy a durable acting career. The movie’s premise was fired by news of the death of the wife of one of Segal’s young students, and Jenny was based on a woman Segal had dated at Harvard.

Yet even a cursory glance at Segal’s exhausting résumé, summarized in an appendix at the end of the newly republished novel, suggests that Oliver is built on the author himself, a polymath Ivy League academic, sportsman, novelist, and screenwriter of, among others, Yellow Submarine (1968). Like Oliver, Segal liked to win, and he won big as Love Story garnered seven Academy Award nominations (of which it won only for Best Score) and a slew of other awards. A few critics, among them Roger Ebert, liked it. Most did not, with The New York Times’ Vincent Canby declaring that “it contains a fantasy for just about everyone, perhaps with the exception of Herbert Marcuse.” Mad Magazine ran a parody arguing that Jenny suffered from “Old Movie disease,” in which the expiring patient grows “more beautiful by the minute.” Sure enough, scrubbed, polished, and swathed in soft focus, Jenny obligingly departs this Earth, leaving poor Oliver hanging off the cliff to a sequel with Candice Bergen.

And yet. Attention must be paid, and not only because Love Story became the top-grossing movie of all time in the US and Canada at the time, taking in over $106 million and rescuing the ailing Paramount Studios from collapse. I have conveniently repressed whether, fresh out of college at the LSE myself that year, I stumbled sobbing from the theater. But an informal poll of my British friends suggests that some of the most hardened New Lefties of the late 1960s shed tears over the movie. As one current commenter on the film at Amazon’s website enthuses, “We all wanted Ali McGraw’s look and her feisty, sarcastic attitude.” Perhaps it was the unblemished beauty and perfection of the young couple. Maybe it was Jenny’s proletarian bona fides (“My father bakes cookies!” she defiantly boasts across the class divide to Oliver’s snobby Dad). If so, those divides are watered down for a nation terrified of class and sold on meritocracy. Jenny had traversed the tracks before the couple met, and for all his vaunted rebel creds, Oliver could only consider marriage to a working-class woman who was also a magnum cum laude at everything from her Radcliffe degree to her musical talent to her stunning looks and the incongruously preppie plaid threads she favored.

Beyond the movie’s wishful sociology, Love Story may, for some, fall under the rubric of the dire film that nonetheless speaks to some common hurt, loss, or peak experience in the viewer’s history. Once, in an attempt to lull myself to sleep during a long flight, I dialed up Robert Redford’s 1980 Ordinary People (a better film than Love Story, though not by much) and found myself sobbing inconsolably over Donald Sutherland’s speech to the surviving son of his marriage to an iceberg played by Mary Tyler Moore. Why? Like Timothy Hutton’s Conrad, I had always been the “good child” who gave no trouble and whose teenaged miseries therefore went unnoticed or ignored by my otherwise loving parents.

Love Story never gave me that kind of catharsis, but even the demographically savvy marketing behind the super-spread of the book and the movie can’t fully account for their wild popularity with audiences around the world. Timing is all in movieland: by 1970 the promised freedoms from bourgeois conformity of the youth counterculture (addressed in movies like Easy Rider, Five Easy Pieces, The Graduate, and, later, the insipid The Big Chill) were curdling into infighting and disillusion. Despite its feminist veneer, Love Story relieved that ennui and its attendant uncertainties by offering a simple fairytale fantasy of a perfect couple upended only by that serviceable crutch of popular narrative: cancer. As Segal told Ebert in an interview shortly after the book’s release, “My book came out just as the world was turning from cynicism to romance. I came along at the moment to say what everyone wanted to believe in.” That moment may have arrived again for audiences seeking refuge from even more radical uncertainty, and from politics, punditry, and pandemics. 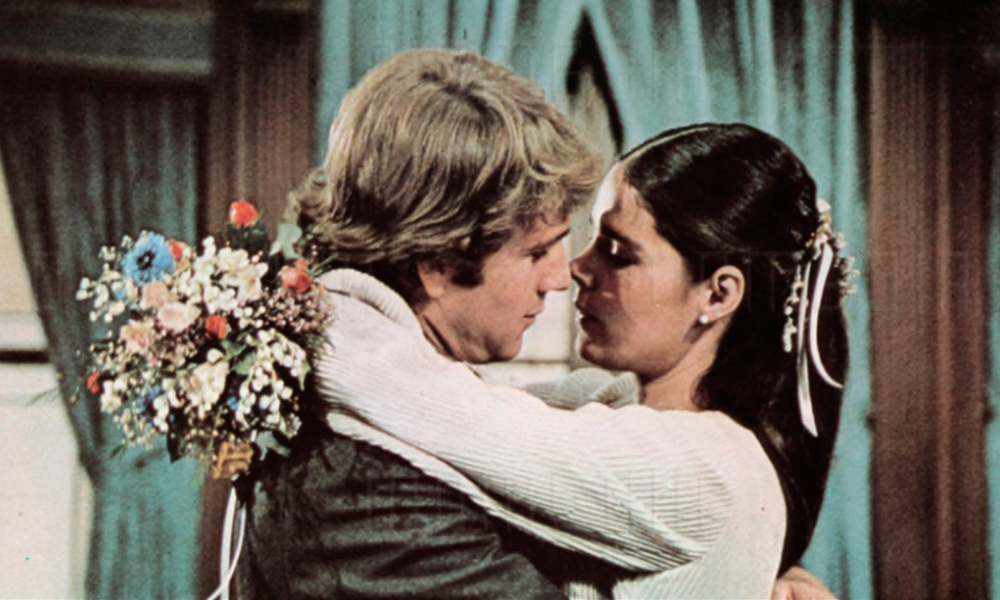