A tailor and his wife cross the border at night, leaving behind their families, their friends, most of their possessions, and what they’ll wind up missing most of all: their language. And yet they’re optimistic. They’re young and hopeful. They’re what you might call dreamers.

They settle among others who’ve fled the same country, speak the old language. The tailor sets up his shop. The wife sets up their home and bears their children, two boys and a girl. Anchor babies some might call them, though, short and slight, they hardly have the heft of iron mooring. Years later, recalling the youngest son at 17, a man will say, “On the whole he looked…well, he was small…he was a smallish lad…I have absolutely…I don’t know if I am wrong but this I remember…such a…he was such a little man.”

Neither the parents nor the children have papers or permission to live in this country and the parents often wonder if they’ve made a mistake in coming, but the children feel they belong. They do speak the language, flawlessly, unaccented. They buy the family’s groceries, take turns depositing the tailor shop earnings in the bank each Friday before sundown, standing on tiptoe to reach the teller’s window. They read the newspaper so they can report the day’s events at the dinner table. All the anchor babies in this community do these things for their parents. Long before they’ve begun school, these children are their parents’ translators and interpreters and ambassadors. They navigate the new world on behalf of now middle-aged men and women who were once so brave, but now, in this land of opportunity, are shy and ashamed and often afraid.

What do these immigrants — this tailor and wife — look like? When I try to picture them, I wind up thinking not about their faces but their shoes. I’m thinking about shoes because this is actually a story about walking: the tailor and his wife walking across a border at night, apprehensive but determined. And it’s also a story about marching, because 17 years later, the tailor, his wife, and their two oldest children are marching back to the country they left. Or, rather, they’re being marched along with 12,000 other illegal immigrants, rounded up, escorted by armed guards in brown uniforms.

Also taking place at the time are protest marches. People march and shout at the guards, decrying their cruelty, trying to get food to the immigrants. People shout at them, castigating them for flouting the law, taking away their jobs, taking up their space.

The truth is I’m making much of this up. Not the bones of the story, not the things people have said about it, not the walking and marching, but some of the details, some of the color. Did the children stand on their toes to reach bank tellers? Did they even go to banks? I don’t know. There are articles and trial transcripts and theories and books about the tailor and his family, each often contradicting the others, and I’m picking and choosing among contradictions, sharing the ones that seem like things that would have happened given my understanding of the world and human nature, stitching them together as I try to understand.

Given all this walking and marching, you’d think I’d imagine the tailor and his wife in sturdy but comfortable sneakers like the ones I wear when I join protest marches — Merrell Moab Boots. This shoe is ready for any outdoor activity from hiking to biking! — but instead I imagine them in old-fashioned work boots with laces and hooks and hard blistering soles. That’s because the day they’re marched to the border is a bitterly cold day in Germany in late October 1938, when poor Jews did not wear tennis shoes.

“When we reached the police station, my wife, my daughter, my son Marcus, and myself,” the tailor will testify at the Nuremberg Trials, “we saw a number of people sitting or standing. Some were weeping. The police inspector was shouting at the top of his voice, ‘Sign here, you are being deported.’”

Now I’m readying to march again, this time over whatever it is Trump is doing vis a vis the Deferred Action for Childhood Arrivals policy. Rescinding it? Deferring the decision on deferral for six months and then rescinding it? Playing games? Who knows? All I know for sure is I have Dreamer students who are terrified, terrorized, I’m pissed, and I’m lacing up the Merrells.

During the marches to recall Scott Walker I did something to my ankle. Now, despite my supportive shoes, my right foot often throbs as I chant my way down State Street, past bars and used book stores and this one cute shoe shop — (shoo): unusual, hand-crafted, wellmade, funky! — that I wouldn’t mind popping into, just for a quick look. I don’t, of course. I stay with everyone else. I keep up.

The tailor’s name is Zindel Grynszpan. The son Marcus will soon change his name to Mordecai. The daughter will always be Berthe, though, and the youngest son, the sole family member not deported on October 27, 1938, the true subject of the articles and trial transcripts and theories and books, will always be Herschel.

The wife’s name appears to have been lost. Why not? She’s done her part, had the kids. Why should history remember her name?

But that’s a grievance for another day. It’s Herschel I’m imagining now. On the day the 12,000 Jewish illegals are deported from Germany and Poland won’t take them back and the lucky ones move into abandoned freight cars and horse stables and the unlucky ones live outside on the ground of this strip of no-man’s-land called The Green Border, Herschel is 16 and living in Paris.

The scholar and activist Ellen Samuels writes, “My grandmother Shirley Gorenstein Jordan came to this country” — she means the U.S. — “as a child refugee from anti-Semitic violence. She spoke no English. She had no special skills. I am here today because of a humane immigration policy and the white privilege that allowed her to become a naturalized citizen at the start of the 20th century when many nonwhite migrants were still barred from that status. In her name I will keep fighting to support all migrant and indigenous people, all refugees, all of those displaced by the crushing violence of war and persecution and the slow violence of poverty and environmental destruction. In her name, I oppose the current administration and all of its vile acts.”

This is true of my family as well. My grandmother’s name was Meita Leinweber.

Two years before his family’s deportation, Herschel left home to attend yeshiva in Frankfort. He studied Hebrew because he planned to go to Palestine. But when his visa application was denied because he was so young and small, he tried to find work as a mechanic. When he couldn’t, due not only due to his negligible age and build, but also because he was Jewish, he went to France. He lived with an uncle and aunt. He found work.

But now, 1938, his travel visa expired, he has to leave. Also, because his German visa has become useless, he can’t leave.

Some law-abiding neighbors call the authorities to report an illegal residing in their building. He flees before he’s arrested. It appears possible, perhaps even likely, that the very same day Zindel Grynszpan is moving into a freight car on The Green Border, Herschel Grynszpan is living under a bridge alongside the Seine.

My friend Jenny says, “It’s hard to wrap my mind around all this.” We’re talking about DACA again. She says, “As a Jewish person I’ve felt the inherited trauma, the sense that it could happen again. But as an American it always felt impossible…until now.”

We used to say never again. Now we say until now.

When Jenny and I say these things — never again; until now — we’re not talking about ourselves. We don’t really think anyone will ever summon us, white Jewish middle-class women of a certain age, to a police station, where an inspector will scream, “Sign here, you are being deported.” It’s others we’re worried about.

Still, there are those Nazi flags at Charlottesville. Nothing riles up a white Jewish middle-class woman of a certain age like a Nazi flag. Which is a problem, I think. The KKK coneheads, the nostalgics for the confederacy should be enough. But, boy, those Nazi flags. Those hobnailed jackboots. They get us into the streets, don’t they?

“What they’re doing to the Dreamers?” I say to Jenny. “That’s pure Nazi shit.”

In early November Herschel pawns his winter coat and buys a gun. At the German embassy he shoots Ernst vom Rath, an undersecretary he assumes is the ambassador.

Body at his feet, Herschel waits for the police. When they arrive he asks for compassion; he was desperate the says. He and his family have nowhere on earth to go. He needed to call the world’s attention to that.

“There is nothing compassionate about the failure to enforce immigration laws,” the police reply. “The compassionate thing to do is end lawlessness, and enforce our laws.”

No, wait. That’s Jeff Sessions talking about the Dreamers, my students, my neighbors.

Herschel waits for the police. When they arrive he asks for compassion. He says — it’s documented; I’m not making this up — “Being a Jew is not a crime. I have a right to live and the Jewish people have a right to exist on this earth.” This is rehearsed, eloquent, and incorrect. Laws have been passed. Being a Jew is a crime. Without an immigrant visa for Palestine, a travel visa for France, a return visa for Germany, Herschel Grynszpan can’t legally place his feet anywhere on the planet.

Except suddenly he can. Fresnes is a prison for young criminals where inmates are treated kindly. There’s a library filled with the best books, the kinds that are translated into every language. He remains there, awaiting trial, stretched on a cot and reading.

Except then the Nazis march into Paris — smooth black leather, heel irons that make a cracking sound as you goosestep on pavement — and he’s sent to Sachsenhausen, the concentration camp north of Berlin, where he dies.

Or — read a different book with a different theory — where he doesn’t die, but is liberated and the French welcome him home and he lives there as a mechanic and a few years later he’s seen in the back of the courtroom at Nuremberg as his father testifies about what it’s like living at The Green Border. After the testimony, he walks out the door, speaking to no one, mechanics work boots with rubber soles making no sound.

That pile of shoes — thousands of shoes, taken from prisoners arriving at Majdanek Concentration Camp — in the Holocaust Museum in D.C.

That single shoe — ordinary red sneaker — beneath the crumpled front grille of the Challenger in Charlottesville after it hits Marcus Martin and kills Heather Heyer.

I don’t believe he becomes a mechanic or a Frenchman. I believe that’s the wish of biographers who want to rescue him. What I believe is he dies at Sachsenhausen…and what I also believe is that several years after that, in the back of the courtroom at Nuremberg, as his father testifies about what it’s like to live at The Green Border, he comes to listen, shrouded and barefoot as a Jew receiving a respectable burial would be. I believe his feet hover midair. What need has he now to touch this beleaguered earth?

Two days after vom Rath’s death, the Nazis use the assassination as a pretext to launch Kristallnacht. The next day they begin the large-scale, long-planned deportation of German Jews — citizens, this time — to concentration camps.

This smallish lad. This little man.

It’s Eichmann who called him that. In 1961, at his trial in Jerusalem, Eichmann, questioned about Grynszpan, says, “I don’t know if I am wrong, but this I remember…such a…he was such a little man.” 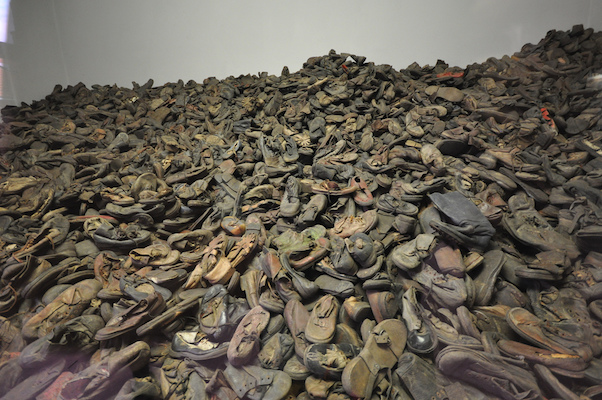