Given what the past year has brought down upon us, it is easy to overlook the 150th anniversaries of two milestone works: Lewis Carroll’s Through the Looking Glass and Charles Darwin’s The Descent of Man, both published in 1871. To be sure, they are an unlikely pair. Descent underpins everything we know about the human past as it ties our physical and mental lineages to those of lower animals. Meanwhile, the infinitely frothier Alice stories describe the peculiar adventures of a Victorian girl who falls down a rabbit hole or climbs through a mirror to explore worlds full of fantastic yet familiarly bossy creatures. But precisely through its splendid narrative caprice, Alice undermines aspects of Darwin’s legacy that we see alive today in the renewed voice and vigor of white supremacy. Reading and enjoying Carroll’s nonsense can orient us away from racially charged assumptions about human advancement that lie deep in the modern psyche.

Written at the height of empire and in the thick of evolutionary debate, Alice refuses to sign on to a theory of human descent rooted in racial pseudoscience. Darwin’s theory of natural selection laid out in On the Origin of Species (1859) broadly refuted the idea of biological progress; but when it came to talking about human evolution in Descent, he, like many of his contemporaries, compared members of nonwhite societies to both animals and children at a particular stage of development. Alice makes nonsense of such comparisons precisely by poking fun at the kind of organized reasoning that should signal cognitive maturation.

I’m a professor of Victorian literature, but when I read Carroll, I am swept back into childhood’s pleasures and fears. The curious creatures and landscapes of Alice’s worlds feel at once whimsical and threatening; they overturn all rules of logic and conduct, but that delicious lawlessness doubles as worrying uncertainty. As a skeptical adult, I might attribute such feelings to the undisciplined young mind that conjures up all kinds of delights and dangers. And yet it is not at all the thoughts of a more-knowing and protective grown-up that I inhabit as I read Alice; instead, I become a befuddled child thrown into a world that refuses to conform to her learned expectations. As every seven-and-a-half-year-old knows, objects should have reasonable permanence rather than “swimming about,” as Alice complains they do; inanimate objects, plants, and animals shouldn’t talk back at you; bodies should grow and change over years, not in an instant. Creepy, quirky Wonderland and Looking Glass country speak to development gone eerily and wonderfully awry.

Carroll’s eccentric stories therefore poked fun at prevailing theories of child development from his time. For instance, In his Physiology and Pathology of the Mind (1867), Henry Maudsley — the leading mid-century British expert in evolutionary “mental science” (the term Victorians used for psychology) — proposed that in its earliest stages, the child mind corresponds with the permanent condition of lower animals: young children are, like lesser creatures, entirely driven by their passions; their happiness or misery depends on immediately gratified needs and desires. Carroll’s characters are all unapologetically impulsive, yet to correct them would be to miss the joke: moral and intellectual compasses don’t work in a world where down might just as well be up and north is the same as south.

Animal-child comparisons are familiar to pet-owning parents today. But for Maudsley, the excessively sensitive child who develops improperly might never climb out of this primitive, animal state. Such a child would never learn to distinguish reality from hallucination and would instead join images together “fantastically and often incongruously by partial, causal, and whimsical coincidences.” In Descent, Darwin similarly compared the tree-climbing stage in young boys with the permanently furniture-clambering state of “idiots,” and claimed that both were like alpine animals. By describing so-called idiocy as arrested development, Darwin, like Maudsley, made the mind of the child the measure by which human beings, individually and collectively, rise above their animal relatives. Using the same logic, he assumed that a lower and more animal human type could be seen in the form of present-day “savage” societies — including those lately colonized into the Empire.

Carroll owned a copy of Maudsley’s Physiology, which was published four years before Through the Looking Glass. Maudsley’s account of pathological infantile hallucination evokes Carroll’s marvelous worlds, where cats have no bodies, babies turn into pigs, fantastical beasts are born out of word play (the “rocking-horse fly,” the bread-and-butter-winged “butterfly”), and everyone uses language with such absurd literalness that any effort at useful communication degenerates into utter confusion. But few readers will conclude that Alice is cognitively impaired or that Wonderland and Looking Glass Country are the deranged products of arrested growth.

Instead her experiences deliver enormous reading pleasure precisely because they suspend laws of logic, nature, and above all development. Rather than editing absurdities out of the mind as the maturing brain ought, Carroll’s White Queen practices believing “six impossible things before breakfast.” By reminding us of the joys of nonsense, Alice and her fellow creatures disobediently thumb their noses at all ideas of proper maturation and evolutionary “progress.”

Alice dreams of lands where children do not stand in for a primitive human past — unlike Darwin’s rowdy boys, idiots, and savages, her cast of characters does not illustrate our deep, biological history. She and her strange companions do not represent the “barbarous” stages of development that Descent, like many works of its time, linked to nonwhite peoples. In the daydream of Wonderland and on the imagined other side of a Victorian girl’s looking glass, the ideas of racial progress that the British used to justify colonialism and empire dissolve into pure nonsense. Immersed in those unnavigable landscapes — countries peopled with argumentative flowers, bad-tempered chess pieces, and impossible animal-object hybrids — Carroll’s child and adult readers alike remain as splendidly confounded as Alice herself. Reading Alice and reveling in its whimsy means reading against a world defined by race and privilege, then as now.

Top image by Sir John Tenniel from the 1865 edition, via Wikimedia Commons. 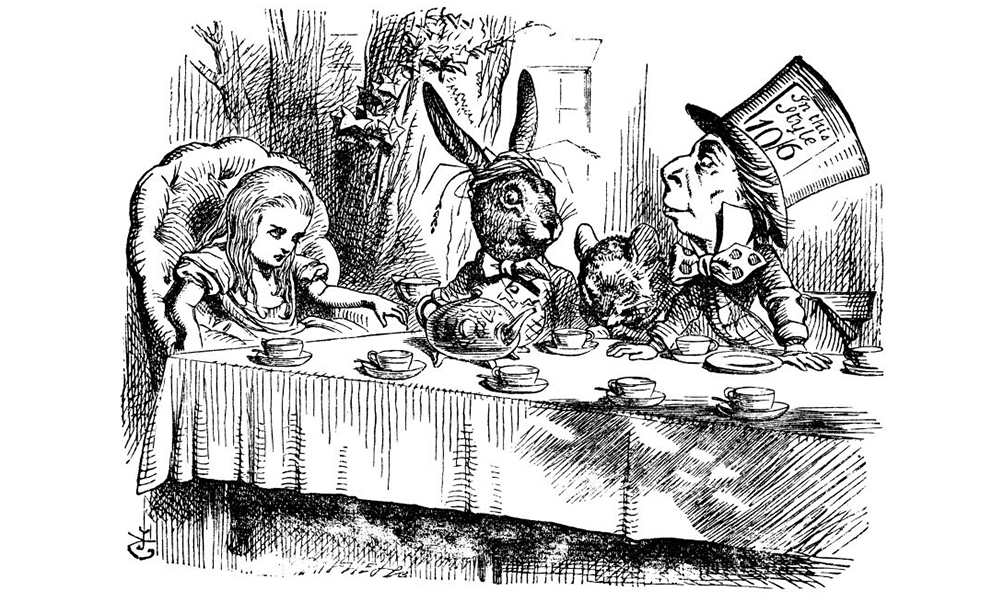