In a 1959 letter to Canadian publisher Jack McClellan, a 25-year old Leonard Cohen characterized his audience as “inner-directed adolescents, lovers in all degrees of anguish, disappointed Platonists, pornography-peepers, hair-handed monks and Popists, French-Canadian intellectuals, unpublished writers, curious musicians etc., all that holy following of my Art.” After he turned to songwriting and the circle of his admirers grew ever wider, the description remained surprisingly accurate. What bonds the groups on Cohen’s list is the sense of striving, an underlying — and mostly inarticulate — need. The 1960s, when Cohen emerged, was, after all, a moment for movements, and Cohen’s witty catalog suggested that even the misfits — scattered in their idiosyncratic pursuits — would have a movement of their own. And what of their leader? In a poem Cohen wrote in his sixties, he reflected on his role with characteristic self-irony: “I never found the girl / I never got rich / Follow me.” Cohen was not in the business of offering salvation to the strivers. Rather, he was a member of his own sect. His needs were like theirs, and he failed — as much as they did — at understanding, let alone fulfilling them. What set him apart was his gift of articulation. He gave an intelligible form to the frustrated groan. To the striving — a voice.

In You Want it Darker, we encounter the 82-year old Cohen still striving. “Longing” was Cohen’s own term to describe his artistic motivation. The older Cohen no longer attempts to master the striving, as he had in earlier years; he submits to it, follows its lead. In an interview with Alberto Manzano, Cohen said of his song “Ain’t No Cure for Love”:

“I see it more like some divine balance at work — that if you experience love, you take a wound, that love and sacrifice are involved somehow one with the other, that the condition that most elevates us is the condition that most annihilates us, that somehow the destruction of the ego is involved with love. But once you submit yourself to this experience, you can never again feel at the center of your own drama, that somehow the heroic position has to fail here with love.”

The hero would challenge the situation, making the world yield to his desires and retaining his integrity. Cohen’s lover, on the other hand, lets himself be challenged and changed by his desire. Indeed, he doesn’t even experience himself as the source of desire: the desire is an automatic response to the value — the beauty, Cohen would say — of the object. For Cohen, the genuine lover is not interested in himself; he’s ready to give himself up for what he loves. Nor is this just about sex. As he told Shelagh Rogers in another interview: “We fall in love with things and with ideas and with people and we can’t help ourselves… Not just with each other… but with principles and ideals and a dream of virtue.” Falling in love demands what seems impossible — the destruction of what one takes oneself to be.

That’s what you get when you follow the path of longing: the loss of self. This experience, which Cohen characterizes as simultaneously “elevating and annihilating,” unifies the erotic and artistic realms. In art and in love, to succeed is to fall. The selfless state is the condition of genuine love and creativity. It is fecund, rich with possibility, precisely because it is unformed and unbounded. Cohen described the search for the poem as the process of killing the selves that would write the versions to be rejected, until one emerges as the self — and the voice — that could not be further reduced.

But the heroic position continued to tempt Cohen to the end. The narrator who submits to the force of desire without a whimper is weak and uninteresting. The lyrical narrator who doesn’t put up a fight cannot generate the tension necessary for a work of art to take off. One needs a spark, and Cohen loves playing with fire. He gives us a hero, but a hero destined to fall.

One alternative to heroism is sainthood, a state he describes in his novel Beautiful Losers (1966):

“What is a saint? A saint is someone who has achieved a remote human possibility. It is impossible to say what that possibility is. I think it has something to do with the energy of love. Contact with this energy results in the exercise of a kind of balance in the chaos of existence. A saint does not dissolve the chaos; if he did the world would have changed long ago. I do not think that a saint dissolves the chaos even for himself, for there is something arrogant and warlike in the notion of a man setting the universe in order. It is a kind of balance that is his glory. He rides the drifts like an escaped ski. His course is a caress of the hill. His track is a drawing of the snow in a moment of its particular arrangement with wind and rock. Something in him so loves the world that he gives himself to the laws of gravity and chance. Far from flying with the angels, he traces with the fidelity of a seismograph needle the state of the solid bloody landscape. His house is dangerous and finite, but he is at home in the world. He can love the shapes of human beings, the fine and twisted shapes of the heart. It is good to have among us such men, such balancing monsters of love.”

Cohen’s poetic persona never makes it to sainthood, just as it never abandons its romantic attempts at heroism. Instead, he oscillates between these two extremes, and in the process generates the tension that makes his art so attractive to all those who strive and fail. Consider how Cohen subverts his own claim to the heroic position in “You Want It Darker”: “I struggled with some demons, / they were middle-class and tame.” Cohen’s characterization of the demons undermines the glory of the struggle, but it doesn’t make the experience of the struggle any less real for the struggler. A little later in the album, in “On the Level,” the lyrical narrator claims: “I was fighting with temptation / but I didn’t want to win / A man like me don’t like to see / temptation caving in.” Once again, Cohen’s lover puts up a fight only to enhance the experience of losing it. He has too much respect for his temptation — his longing — to see it “caving in.” He cultivates defeat, and we fall with him. As Cohen insisted time and again in his last interviews, there’s no free will. Ultimately, one must submit to the world and accept oneself — the flaws, the weaknesses — but not without a struggle. Acceptance is, indeed, hard-won. It is won through loss, and through love. In an interview with Stina Lundberg Dabrowski, Cohen explained what drew him to his teacher Roshi, a controversial figure for whom he had moved to L.A.: “What Roshi loves in you is not necessarily who you think you are but what you really are. He loves that and allows you through that love to locate it. I think that’s the most selfless kind of love. He loves what you really are.”

Most of the lyrics on You Want it Darker were poems before Cohen and his son, Adam, made them into songs. Recited in Cohen’s aged, peaty voice, they mean more than they did when neatly arranged on a page: the groans, the crackling, the pleading intonation that fades to a whisper and breaks, falls to silence — all these are indications of fluency in the language longing. One gets a sense that the words had been written over an extended period of time by a man who was still making discoveries, changing. In his interviews, Cohen had frequently said that he kept writing the same Thing over and over again. The Thing underwent multiple iterations, morphing into a novel, a poem, a song, a childish computer-generated drawing. But some aspect of the Thing remained forever unexpressed, kept coming back, asking for the impossible. “Things come so damn slow,” he explained in an interview with Paul Zollo. “Things come and it’s a tollgate, and they’re particularly asking for something that you can’t manage.” And yet you struggle. 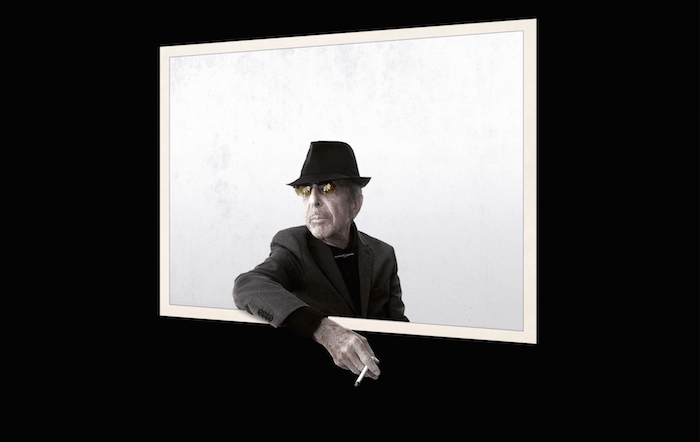