To talk about Rupi Kaur is to talk about numbers. Known for her unorthodox rise through social media, Kaur combines the intimacies of personal confession with the scrolling feeds of spectacle, yet her dominance on the literary scene is of the decidedly quantitative kind. There is the much-cited 1.7 million followers on Instagram. Add a million to that and you get, roughly, the total copies Kaur has sold of her debut, Milk and Honey. The collection has been translated into 25 languages, which is coincidentally Kaur’s age; whatever threat the “instapoet” poses to the literary establishment, it’s a threat with room to grow.

Kaur shares much of her work on Instagram, and if her poetry seems inseparable from her online presence, that’s partly by design. As a Punjabi-Canadian writer, she has used her online platforms to speak about the immigrant experience, racism, and bullying, earning her appreciation from readers looking for more diversity in literature. Yet to her critics, Kaur’s online heft is a sign of her fraudulence. Her blogger’s origins allowed Kaur to escape unfairly the trials of a traditional publishing industry, and skeptics believe that with fame, the deception only doubles. Those who dislike Kaur see her social media presence now as not just a shortcut, but an orchestrated PR strategy that manipulates audiences for profit. The clear underlying consensus of fans and critics alike is that whether you hate or love Kaur’s work, her public persona is often the reason why.

A recent New York Magazine profile was widely shared after it depicted Kaur as inarticulate and shallow, implying that behind Kaur’s success gapes an absence of literary merit. Yet the profile dealt only lightly with Kaur’s poetry, inserting fragments of her works in longer paragraphs about her fame, international book tour, and jewelry choices. The one poem set apart from the article’s layout, to be digested in its original form, was a parody of her work written by somebody else. The same internet that enabled Kaur’s rise has allowed us to evaluate her shortcomings, and yet the media has made it clear that Kaur’s unskilled work is not the most important, or even odious, thing about her.

Kaur is the poet parvenu who outsold Homer by a factor of 10, who is accompanied everywhere by her media team, who literally judges books by their covers. Her disregard for performing literary knowledge, and for placing her poetry in conversation with academic theory, have stoked anxieties that Kaur somehow unfairly stole her success, and that the democratizing impulse she represents (everyone on the internet can be a poet!) will bring other imposters into our midst. We have become so concerned with what she represents as a public figure — where she stands in relation to the literary establishment and what her rise says about fame in publishing — that Kaur’s biography has become the crucial basis of our critiques. The author is no longer dead. We’ve resurrected her, and now we’re following her on Instagram.

This tendency sets counterproductive precedents for literary commentary in an age of increasing visibility for writers. When one chooses to deride Kaur for her PR-slick persona (and the change it represents to the publishing industry) the gendered stereotypes come easy — Kaur as the woman who is alternately a substance-less airhead and a cunning manipulator, who relies on aestheticized appearances to mask an absence of talent. The scrutiny will often slip into mockery of her fans, many of whom are also young women. I am not a dedicated reader of Kaur’s work, and I’ve come across her poetry the same number of times any internet user has (which is to say a lot, and never purposefully). But I think often about how disparaging remarks directed towards her often recycle the same words — “superficial, quirky, vapid” — and how these criticisms aim to denigrate not just her poetry, but the many readers who like it. The New York Magazine profile dedicated two paragraphs to detailing the superficial trademarks of the Rupi Kaur fanbase: young women and the photographs they post of “tea, scented candles, Polaroid photos,” and Paulo Coelho novels. It’s a catalog of feminized dilettantism that conflates the faults of Kaur’s works with those of an entire demographic.

Kaur’s estrangement from traditional literary circles is further complicated by her own position as a Punjabi-Canadian immigrant. Though Kaur publicly champions women of color, critics have described her efforts as insincere, calculated, and belied by her present-day success. In a long essay published on Buzzfeed, one critic suggested that Kaur’s frequent invocations of her South Asian heritage amounted to a disingenuous PR strategy — “carefully modulated in order to maximize her marketability” and shore up support across various demographics. And it is true that Kaur, as a “privileged young woman from the West,” comes across as cynical when she invokes the stories of women whose life experiences are undoubtedly different from, and harder than, her own. Quotes about the immigrant experience and its struggles take on a strange pall in the light of the New York Fashion Week and black-tie book events documented on Kaur’s social media.

Yet to criticize Kaur for her privilege as an immigrant living in the West risks discounting a large portion of Asian American literature, which often deals with the precise question of how second or third-generation immigrants — many of them living comfortable lives — inherit trauma from their ancestors. Literary scholar Kathleen Brogan has described this phenomenon as a “cultural haunting,” in which immigrant characters are burdened with the resurgent, collective memories of past generations. Buttressed by suburban America and prestigious universities, their lives are nevertheless repositories for historic trauma and violence that characters must learn to internalize. Writers like Maxine Hong Kingston and Jane Wong have played with this experience in their literature, materializing cultural haunting through the forms of stubborn ghosts and deformed, bulging bodies.

For immigrant children, it is most often the narrative act of story-telling that allows one to resolve the taut discrepancies between past and present. To condemn Kaur for invoking a particular collective experience confiscates from her this narrative act, so central to Asian American writing. More dangerously, it can also lead us to parceling and handing out histories based on who, we think, deserves to tell them. As formulaic as it is, Kaur’s writing opens a space for the adoption and play of different voices.

In a poem about her name, she writes that “kaur runs in my blood / it was in me before the word itself existed / it is my identity and my liberation.” Though the sentiment is personal, the chosen words remain vague and banal, and nothing about the poem seems uniquely applicable to the writer. If it feels as if one could swap in any other name for Kaur’s, then perhaps that’s the point. It is the generic, flabby quality of Kaur’s diction that allows readers to claim identity and liberation as well — like a pair of shoes already broken in by somebody else. This is Kaur’s game. Within her existence somewhere between confession and cliché, Kaur extends the personal as an offering, an invitation to communion. What readers find at the end of her poems is not Kaur herself, but Kaur as a flickering symbol for different figures: the South Asian immigrant, the Asian immigrant, the immigrant, or simply someone trying to fit her past into her present.

Our anger over Kaur’s vague acknowledgements of her heritage, our desire that she stop flickering, reveals the anxieties we have about who gets to write what and how writers of color claim identity. When a white man entered a poem into an anthology under the name Yi-Fen Chou in 2015, claiming that submitting with an Asian-sounding name makes one more likely to get published, commentators were rightfully quick to condemn his “Orientalist profiteering.” Yet reviewers responded similarly to the case of Bill Cheng, a 29-year-old Chinese-American who was raised in Queens and later wrote a novel about Jim Crow-era Mississippi. Reviews questioned whether Cheng would be able to accurately capture the setting of the novel due to his background. Their doubts seemed to have less to do with the subject matter and more with the fact that Cheng, himself a minority, was challenging literary categories normally assigned to Asian American writers. As Gracie Jin put it at the time, “The underlying question isn’t about authenticity. Rather, the question is: ‘Don’t you have your own heritage to write about?’”

Following this thread of inquiry amounts to ransacking a writer’s personal life to determine what claim he or she has over a given subject. Perhaps unintentionally, it can lead to whole-sale equations between a writer of color’s personal history and the material they work in. Writer Suki Kim has said that, as a woman of Korean descent, the expectation was always that she write emotively and not journalistically about North Korea. When she finally published her painstakingly researched book on elite secondary schools in Pyongyang, Without You, There is No Us, Kim found herself typecast as a memoirist rather than an investigative reporter. She describes that some critics “even denounced me, a South Korean woman, as someone who had merely returned ‘home’ to North Korea; to them, I hadn’t gone undercover at all. Which is another way of saying that what I had written was personal, and therefore by definition not authoritative.”

In these moments, and in recent reviews of Kaur, the literary establishment has revealed itself to be increasingly parsimonious in the stories it allots to writers of color. There is the expectation that identity must pervade the writer’s work and personal life, thereby giving readers a coherent, unchanging prism through which to digest difference. The expectation is doubled at the nexus of social media and literature. If a writer lays claim to a certain identity, they must enforce this claim through a performed authenticity online. Nowhere is there room for ambivalence, complexity, inconsistency.

Critics bristle when Kaur highlights her immigrant background in one moment and casts herself as a writer of universal themes in the next. But is it not possible for Kaur to do both, and be both? By criticizing Kaur for answering the same question differently at different moments, we demand from her an exhausting consistency that nobody could realistically embody. Kaur does not represent the collective centuries of migration and colonial violence that South Asian Americans have experienced, and it’s doubtful she thinks she does. Though simplistic, her poems do contain value for many readers who understand what it is like to live in North America and look a certain way. And it is strange that we choose not to celebrate the enthusiasm Kaur’s readers feel for poetry, or the possibility that her work will serve as an entryway into other literary forms. The walk from the YA aisle to Middlemarch is not a far one. For many young readers, literature is simply literature, and tastes are allowed to range and evolve across the borders of genre and form.

There is a way to productively critique Kaur’s poetry, but it can’t be found in mocking the young women who read it, or in equating a writer’s public persona with artistic illegitimacy. For a long time, writers and publishers have expressed anxiety over faltering sales in books and increasing disinterest in literature. Yet when someone like Kaur garners popularity, we are quick to underline the boundaries that divide what is high-brow from what is unworthy of note. Our attitude about her public figure can be off-putting to younger or infrequent readers, and amounts to an elitist you-can’t-sit-with-us mentality. The joke is that Kaur, with her legions of fans and millions of books sold, doesn’t seem to care for the table. 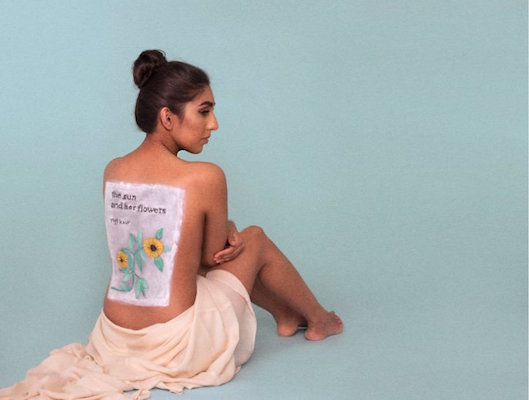