This November brings the 70-year anniversary of the United Nations General Assembly partition plan calling for the establishment of two separate states in British mandatory Palestine. As everyone knows, that initiative didn’t work out quite as imagined. Debate over the ongoing conflict that has simmered ever since tends to focus on the military and politics, the violence and the failed negotiations. But what is so often overlooked is the impact the conflict continues to have on the people themselves, the civilians, and especially the most vulnerable among them, children with serious illness.

Imagine facing every parent’s worst nightmare: your child has been diagnosed with cancer, the cancer has spread despite all therapies, and the doctor has now told you that there is no longer any realistic hope for cure. The doctor suggests it is time to start preparing for the end. Imagine now that you live in a close-knit village, more like a giant extended family, not five miles from the shiny modern hospital room you now sit in. But because a disputed border lies between the two, you are faced with one final, terrible choice. Your child can receive end of life care here in the hospital among the staff you have come to trust. They will use all of their equipment and medications, with 24-hour staffing, to make sure that come what may your child won’t suffer. But because of that border, only a limited number of family members will be able to join you to be present at the bedside. Alternatively, you can return home with your child to the comfort of your own home, to a familiar place where your child can be surrounded by family, friends, and her own belongings, all in a familiar cultural milieu. But in this case, because medical resources in your village are limited and your child’s medical team can’t cross that border, you will be alone in managing your child’s impending death. This is a dilemma faced all too often by Palestinian parents and children receiving care for serious illnesses in Israeli hospitals. I know, because for years I was one of the doctors forced to guide families through this process. Which would you choose? Studies from Western countries suggest that most children and families facing end of life prefer, when possible, for death to occur at home. But what to do when that option brings with it a trade-off, the fear that your child might suffer unnecessarily, that you might find yourself alone in the middle of the night, unable to manage her sudden pain or breathlessness as death approaches?

Throughout the constantly simmering low intensity conflict, there has of necessity been some quiet collaboration between the two peoples. Since the signing of the Oslo accords in 1993 Palestinian security forces under the Fatah-led government and the Israel Defense Forces have communicated to some extent around security threats. The Israeli and Palestinian economies are interdependent; Israel and the Palestinian Authority collect taxes on one another’s behalf, and, with the occasional disruption, effect monthly transfers of those funds. And sick Palestinians routinely receive permission to receive care in Israel when their needs can’t be met by Palestinian services, a process requiring the approval of both Israeli and Palestinian authorities. Among the thousands of Palestinians who line up early each morning at military checkpoints waiting to cross into Israel are several hundred men, women, and children seeking medical care.

Despite this arrangement, the two medical systems remain almost entirely isolated from one another. Israeli and Palestinian clinicians rarely communicate directly with one another, separated by language and politics. Patients returning from Israel at best carry with them letters outlining their condition, the treatments they’ve received, and what should be done in case of medical emergency. And ultimately it is those who are most vulnerable, the patients themselves, who pay the price for this lack of communication.

If there is one area where you would think individuals could transcend regional politics it is the care of dying children. What could be more compelling than ensuring that a terminally ill child and her family receive the best care possible in her final days and hours? And yet, attempts at cultivating collaborative relationships around even these sorts of tragic circumstances continue to fail.

In some respects this is an understandable byproduct of the ongoing occupation, which even after 70 years seems to have no end in sight. Many Palestinians argue that working with Israelis on any project, regardless of how noble the cause, is a slippery slope to normalizing the current situation. Indeed “normalizer” has become a dirty word among Palestinians, much as “collaborators” have long been held in disdain. To be sure, it is important that we not allow the current situation to simply become the new normal, no matter how long it has been going on; individuals on both sides, Israeli and Palestinian alike, must remain alert to the risk of becoming anesthetized to the poison of the occupation, to the damage that it continues to wreak on both societies. But finding common ground over the care of seriously ill and dying children should transcend political strife. Not just because it is the right thing to do. Beyond that simple, but vital,  moral stance there exists potential within those interactions for fostering a common language, for each side to see the other as just a bit more human.

In 2013, as I first became involved in developing pediatric palliative care services in Jerusalem, I travelled to an international oncology conference in Asia. Eager to build a regional network of like-minded individuals, and perhaps a bit naïve despite my years of living in Israel, I tracked down several pediatric palliative care clinicians from one of Israel’s neighboring countries. Hearing my American accent, they greeted me warmly and expressed an interest in working together. But that warmth quickly dissipated when I identified myself as an American-Israeli working at a Jerusalem hospital. We can’t work with you, they said. In fact, they added, plucking back their business cards, please don’t contact us. If we even receive an email from an Israeli address we may come under suspicion and be punished. I was left speechless and heartbroken.

Now I find myself less naïve, but again with hopes for regional collaboration. A number of medical centers in both Israel and the Palestinian Authority are currently working on ways to help each other develop pediatric palliative care services. They are exploring how best to learn from each other, to support each other’s growth, and, critically, how they can work together to improve the care of children across borders. Of course, the current winds of political change encircling the globe bring with them heightened uncertainty and risk. At the moment this collaborative effort is no more than a house of cards, vulnerable to the slightest breeze. It is now that we should, we must, buttress the foundations against these forces.

The years of conflict have done immeasurable damage; the wounds that have been created, if they ever heal, will at best turn into knotty scars not easily forgotten. At this time of global political turmoil Israel, the Palestinians, and their allies abroad, most importantly the U.S., should be focusing funding and support on efforts like collaboration around pediatric palliative care. On projects that can help make the word “collaboration” beautiful again, and foster the development of common ground around issues of social justice. The complex situation between Israelis and Palestinians is unlikely to dissipate overnight. It often feels these days like there are more borders being reinforced than there are bridges being built. Transferring taxes and sharing security concerns, though both important, will not build understanding. What better place to start with than the care of seriously ill and dying children? As a pediatric oncologist in Jerusalem I spent many nights frustrated and worried about what might be happening with my patients who had chosen to return home to die, unable to make a simple, reassuring home visit despite the fact that I could see the twinkling lights of their villages from the ridgeline above the hospital. Making the tragic medical journey of seriously ill and dying children and their families as comfortable and as meaningful as possible, regardless of borders and politics, should be a common goal we can all strive for, a common language we can all seek to learn. Through supporting these sorts of efforts the U.S. and its allies can start fostering more dialogue at the level of individuals and local communities despite the lack of progress on the diplomatic front and laying the groundwork for hope. 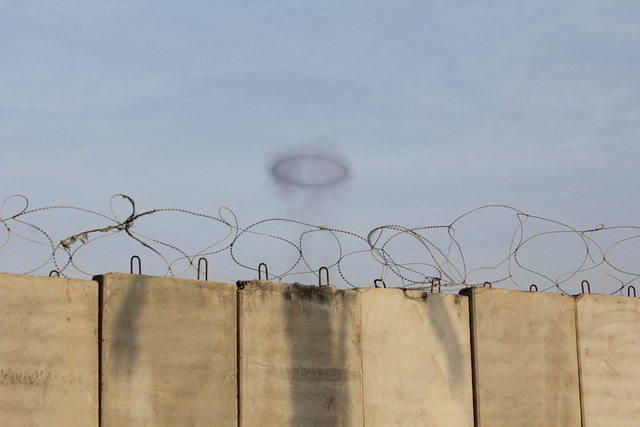