I discovered Lawrence Weschler when I was interning at McSweeney’s in 2006, though I didn’t realize then who he was. I knew only that he had recently produced with that publishing house an essay collection titled Everything that Rises: A Book of Convergences — images, forms, and compositions found in life that seem also to repeat throughout art history: Rothko’s 1969 black and white colorblocks mirroring newspaper covers from that year’s moon landing. Joel Meyerowitz’s photograph of a 9/11 first responder echoing Valezquez’s rendering of Mars, god of war. A pair of lips floating through Man Ray’s oeuvre and arriving, surreally, in a 1976 Los Angeles sky — a languorous oblong cloud in the shape of a pout, lit orange in the golden hour dusk. Art, imitating life, imitating art.

The interns at McSweeney’s are not paid, or they weren’t then, but they are invited on their last day to help themselves to a few books from the office stock, which is how I came to possess Weschler’s collection. I flipped through it, fascinated, and then put it on a shelf for a decade. It wasn’t until grad school that I truly discovered Weschler, when a professor assigned his seminal essay “Vermeer in Bosnia.” In it, he draws connections between the Vermeer paintings he observed hanging in the Mauritshuis Museum and the Yugoslav war-crimes tribunal he was covering nearby in The Hague. He concludes, startlingly and convincingly, that these apparently incomparable things are in fact remarkably similar: they are both about finding interior peace in the face of ravaging violence.

This is, I now know, Weschler’s specialty: pairing seemingly unrelated things to revelatory effect. I was stunned by the power of his insights as well as the openness of his prose. In refreshing contrast to the tight-fisted academic arguments I was used to, Weschler’s essays are rangy conversations, brilliant and accessible, illuminating and human-scaled. I had found my new favorite essayist.

It just so happened to be around this time that my aunt began the project of scanning and cataloging our old family photographs, periodically sending out images of interest. One such arrived in my inbox, a snapshot of me as an adolescent girl. “Like that Cassatt painting,” she wrote. I own a catalogue of Mary Cassatt’s work and I knew which painting she meant. A young girl in a white dress, brunette like me, slumped on a blue chair, frozen in a moment between rest and play. Wait a minute, I thought — could I be having a convergent moment of my own?

My photo is from 1989, New Year’s Eve at my grandparents’ house. Like Cassatt’s girl, I am about 10, still very much a child, wearing my best dress. I have just plopped down onto my grandmother’s damask couch, flushed, as though I’ve been running, or maybe dancing. Also like Cassatt’s girl, my clothing and hair are disheveled and my limbs are arranged awkwardly, unselfconsciously — my legs splayed, my elbows jutting out in sharp angles above my head. Even the silk damask of my grandmother’s couch echoes Cassatt’s impressionistic textiles, the pillows at my waist recalling the other girl’s sash. The composition so closely resembles that of the young girl in the painting from 1878 that it is, as they say, uncanny.

I was downright giddy. This was indeed one of Weschler’s convergences, right in my very own inbox, and I wanted to understand it beyond its novelty. I wanted to know what they mean, these reverberations across time and space and media. I pulled Weschler’s book of convergences of the shelf, looking for answers.

But it turns out Weschler won’t be pinned down in this book when it comes to meaning. He sticks to his signature move of pairing surprising images, but here he refuses to turn his observations into argument. Instead, he equivocates: “I don’t want to make too much of this,” he hedges, or, “make of it what you will.” He’s wary of interpreting the patterns he sees, of forcing meaning where it doesn’t fit. Instead, he merely presents his observations with a sense of wonder. As he puts it, “What’s interesting to me is that history repeats itself, not only in how people arrange themselves but in how the portraitist of them stands in relation to them.” He doesn’t hypothesize about how or why these patterns emerge, or what they mean; he’s simply pointing out that they exist. In a way, this approach is its own kind of argument — by resisting exegesis, the collection argues for a human, rather than an academic, response to art. It commands us to just sit still for a second and let our minds be blown by these weird, unconscious repetitions spanning time and space and media.

But sitting still is a very difficult thing for the human mind to do. It is always asking why, so despite Weschler’s hesitation, I still wanted to make sense of it all. Having glimpsed my own reflection in an art historical infinity mirror, my mind insisted on making sense of the experience. And in spite of himself, Weschler does in this book offer a path to meaning when life imitates art.

One chapter is devoted to what he calls “Expressions of an Absolute.” Pollock and the galaxies, Rothko and the moon — Weschler the art critic wonders how the popular images of space that abounded during the midcentury Atomic Age might have influenced these artists. But he ponders, too, in a humanist sense, how the paradox of infinity expressed in these paintings makes the viewer feel. “I’ve wondered about the human scale — the place of the human in the unfolding drama,” he muses. “Standing before such paintings, I can get to feeling positively infinitesimal… or, alternatively, as my eyes sweep the canvas and my mind identifies, momentarily, with the glory of the painting, I can get to feeling almost godlike.”

It seems to me that we can use this paradox to make meaning out of any of his convergences, since they, too, are expressions of an absolute. The uncanny repetitions Weschler finds fill us with wonder because they hint at an infinity that is, like the universe itself, both random and ordered. We recognize the repetitions with a stomach drop; a brief unmooring from gravity — a gut sense of the past and the future spinning out in both directions. At least, this is the thrill I experienced when I glimpsed my own likeness reflected back at me in Cassatt’s girl. I felt exactly that tension between the infinite and the infinitesimal Weschler describes — a frisson of understanding of the vast scale of the universe, the recognition that history does indeed repeat itself, not only in how things arrange themselves, but in how we stand in relation to them. I experienced a swell of importance at being a part of this collective expression, and at once felt utterly insignificant within its scale.

And so Weschler’s question remains: what is the human place in the drama? Anyone can see these repetitions are more than coincidence, surely they are patterns. But are we the pattern makers? Are we the gods conjuring the cosmos, moving into position with intuitive intention, or are we merely specs of cosmic dust, unconsciously following the logic of a universe too vast and complicated for us to understand? The answer is that we are both, of course, an absolute paradox, manifest in the bend of a young girl’s elbow. 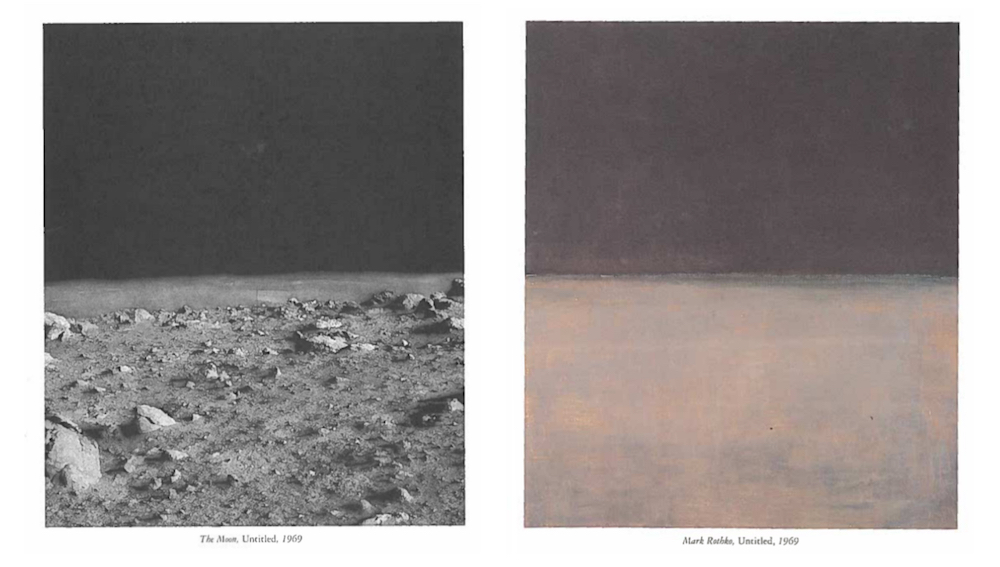