Worlds like those of Battlestar Galactica, Westworld, and Blade Runner — worlds where robots easily pass as human — invite us to ask where robots end and humanity begins. In the Star Wars universe, we know who is human and who is a droid, and so we have the opportunity to ask a more subtle question: if (and when and why) non-humans are worthy of moral consideration.

Is it when they demonstrate at least some rudimentary kind of emotion, even if only through beams and beeps (R2-D2)? When they use language to express emotions like fear and concern (C3PO)? When they develop relationships with human beings, especially relationships that change over time (Rogue One’s K2SO)? Though no Star Wars movie has done more than Solo: A Star Wars Story to raise these questions, none has done less to advance worthwhile answers.

When Solo was released last year, critics bemoaned the movie’s mediocrity but championed its one saving grace: L3-37, the funny, brash droid and first mate to Han’s partner-in-crime pilot, Lando Calrissian. Played by the excellent Phoebe Waller-Bridge, L3 is the first female-voiced droid in the Star Wars universe, and she is very vocal about her politics: droids have rights, and those rights are being violated. She is given plenty of droid rights one-liners to shout, but they all land as punchlines; Lando, her closest friend, more than once mocks her outrage over the indignities of droid servitude; and when L3 eventually liberates some of her fellow droids, it’s a distraction to save Han and Lando, not an attempt at political change.

And yet, praise for L3’s revolutionary spirit was nearly unanimous. From the Detroit Free Press to Vulture to IndieWire, she was hailed as “incandescent,” “one of the best Star Wars characters ever,” and a “revolutionary queen.” The Atlantic’s Spencer Kornhaber called her “a robot revolutionary… sowing dissent among servants.”

But they were all of them deceived. Critics have confused Solo’s explicit treatment of this issue for serious treatment of it. L3’s presence is the film equivalent of Instagramming a selfie wearing a t-shirt that says “FEMINIST” in imitation-lipstick font. Shouting “droid rights!” tells us exactly nothing about those rights, or the conditions that might make such an utterance necessary.

The droids of Star Wars are a true underclass. Though they are called droids (short for “androids”), the word “robot” would be more accurate. Coined in the early 20th century by Czech playwright Karel Čapek, “robot” comes from robota, meaning forced labor or drudgery. Robots do the work that is too dangerous, too tedious, or too dirty for humans to stomach. They are enslaved, tortured, and beaten — “deactivated” if they become too much trouble.

We first meet L3 outside a droid cage fight. “We are sentient!” she screams in earnest, as she rattles the cage. The man who owns the fighters confronts her, things get physical, and Lando has to intervene. “L3! Let go of the mean man’s face.” She relents, but bickers with Lando all the way to their ship, the Millennium Falcon. Lando tells Han quietly, “I actually would have her memory wiped, but she’s got the best damn navigational database in the galaxy.”

What about this dynamic is revolutionary, or for that matter even original? A man who says he’d rid himself of a nagging woman concerned for her “rights,” if only she weren’t so immensely useful to him? Lando adds, loud enough for L3 to hear: “Could use a fresh coat of paint, though!”

“Landonis” — ah, she likes to use his full name when she scolds him — “you do not want to press that button with me!”

L3 being Star Wars’ first female droid is not at all incidental here; it’s central to the way the character is pitched for laughs. Critics used words like “feisty” and “sass” when writing about her. This isn’t how we describe people we take seriously. These are words we use to downplay the rage and radicalism of women, to make them seem sweet and manageable enough to fit our understanding of femininity.

An alternative to declawing female activists by sweetening them is doing so by sexualizing them. Besides having Phoebe Waller-Bridge’s voice, L3-37’s physicality (also created by Waller-Bridge, in motion-capture) has a definite tall, powerful, sexy femaleness, and the movie hardly tries to hide that. After the droid cage fight, the fighters’ owner yells to L3, “I’ll flip your switch!” She replies, “good luck finding it.”

David Ehrlich wrote in IndieWire that “The first thing we notice is her height, which she wears kind of unnaturally — like a low-rider that’s been jacked up on a massive set of rims.” Here, a male critic attempts to circumvent sexualizing a female character — by comparing her to a car. Kornhaber hedges less: “her tall silhouette, it must be said, has noticeable hips.” It must be said.

Her sexiness wouldn’t necessarily be a problem, if it were not part of the movie’s broader failure to take its women seriously. Despite having a handful of Strong Female Characters, Solo barely scrapes by with a pass on the Bechdel Test. And one of the SFCs, played by Thandie Newton, makes it no more than 21 minutes — if you round up — before sacrificing herself for a man.

Later in the movie, as Lando leaves the cockpit, he asks L3 if she needs anything. “Equal rights?” she suggests. Lando pauses, rolls his eyes, and walks away.

In Harry Potter and the Goblet of Fire, the fourth of the Potter books, Hermione Granger decides to add to her long list of academic and extracurricular commitments (so intense it literally requires time travel) the abolition of house-elf enslavement in the wizarding world. House-elves are the sentient property of certain wizarding families, unless or until their owners are moved to free them by offering their house-elf a clothing item. Hermione declares the treatment of house-elves cruel and immoral, and announces the establishment of the Society for the Protection of Elfish Welfare. Harry is uncomfortable, Ron laughs, and readers do, too — I mean, she’s named it S.P.E.W.

But we also suspect that Hermione is right — she is the smartest of the group, after all. We encounter the plight of the house-elves two books earlier, in Chamber of Secrets. Dobby the house-elf reluctantly serves Lucius Malfoy, a man who is not only malevolent but deeply anxious that others recognize his evil credentials. When Dobby makes a mistake, he is beaten by Lucius, or pre-emptively punishes himself by slamming his fingers in an oven door.

After witnessing this horror for much of the school year, twelve-year-old Harry has the decency to free the elf in the book’s conclusion. He surreptitiously slips a sock into a book he knows Lucius will be too lazy to carry, Lucius shoves it into Dobby’s hands, and Dobby is therefore free.

With S.P.E.W., Rowling has set us up. We laugh with Ron, as we often laugh in life at those who earnestly champion legitimate causes. We roll our eyes at those who probe our moral blind spots, which restrain our compassion to allow us to charge ahead with our daily lives in an unjust world. It is much easier to laugh with Lando at L3’s quest for rights than it is to think she might be right, and about what that might mean for the Star Wars universe — and our own.

Dobby rather problematically goes on to serve Harry and his friends loyally, to his death, in the war to come — but we have seen the horror that plagued him before. His death is also taken seriously. It’s the turning point of the seventh book, and the dramatic climax of the penultimate movie.

There is a moment where it seems Solo’s writers may have set us up as well. Another female character, Qi’ra, barely restrains laughter while L3 explains her relationship with Lando near the middle of the movie. He’s in love with her, she says, but she’s not sure she feels the same way. Qi’ra’s barely restrained laughter in response suggests it’s funny, but it might also be true. When L3 lies dying in Lando’s arms, it seems like the moment of reckoning with our laughter has come.

It hasn’t. L3’s death is swift, its consequences minimal. Lando sheds a tear or two and moves on. We are left to conclude, I suppose, that the scene with Qi’ra was only a joke — the punchline being that this robot thought she was worthy of love and equality, and merely imagined the relationship, as we sentimental women are wont to do.

Not to worry, though — her death does not deprive her male companions of that precious mapping database. It is, as Kornhaber explains, “uploaded to the Millennium Falcon’s computer… a fate that nearly suggests a droid has a soul — and it definitely says that the soul of Solo is this robot.” Kornhaber may be right that the movie’s writers hoped her database-upload would read as a worthwhile afterlife. But offering up her geographic data and becoming part of a ship that will take moderately sexist commands from Han Solo for the next few decades? Hardly sounds like an activist’s version of droid heaven.

Before her death L3 does, as critics emphasized, start a rebellion of sorts. Han, Lando, L3, and their crew head to a mining camp to secure some goods for a crime lord. While at a control panel, L3’s way is blocked by a small droid hampered by a restraining bolt, used by humans to keep their droids obedient.

“Barbaric,” she mutters, removing the bolt. “Congratulations! You’re liberated,” L3 jokes (which we are apparently supposed to accept as consistent with screaming herself hoarse earlier trying to free droid cage fighters). Some beeps ensue — the other droid is puzzled, asking her what to do. (How funny! If we did free our [droid] slaves, they wouldn’t even know what to do with themselves.) “I don’t know,” she replies, “free your brothers and sisters or something.”

Compare this with Chewbacca, who at the same time is in the mine below with Han, fighting their way to acquire the coaxium. He sees his Wookiee brethren in chains, being beaten, and cannot bring himself to leave. He abandons the mission, takes up arms, and turns to fight for his people.

As the crew runs back to their ship, L3 pumps her fist into the air, shouting “Rebelliooon!” It’s not a revolution; it’s a lark. Besides, this is a prequel. We know the fight for droid rights is going nowhere in a galaxy far, far away.

The mechanisms of oppression are simple. One group of people has power over another, whether they are divided by nationality, race, class, gender, sexuality, or species. Those in power slowly, systematically lock the other group out of any possibility of overcoming their subjugation. Soon enough, the powerful — and even some of the powerless — decide that this is the world’s natural (see: right) hierarchy: those who have been subjugated are not capable of more, and therefore ought to remain subjugated.

Not all science fiction needs to challenge oppression or strive to answer humanity’s deepest questions. That’s fine; give us a cute non-speaking droid like The Last Jedi’s BB-8 and send us on our way. But for Solo to put L3-37 forward as revolutionary, and for viewers and critics to accept her as such, is a misuse of the power of speculative fiction. The movie signals its virtue with L3’s dialogue, but continues to remind us that it’s just for fun. Solo’s jokes are sobering, a reminder that even when our culture appears awakened to injustice, we often prefer to deactivate our activists before they present too much of a challenge, too great a demand for change. 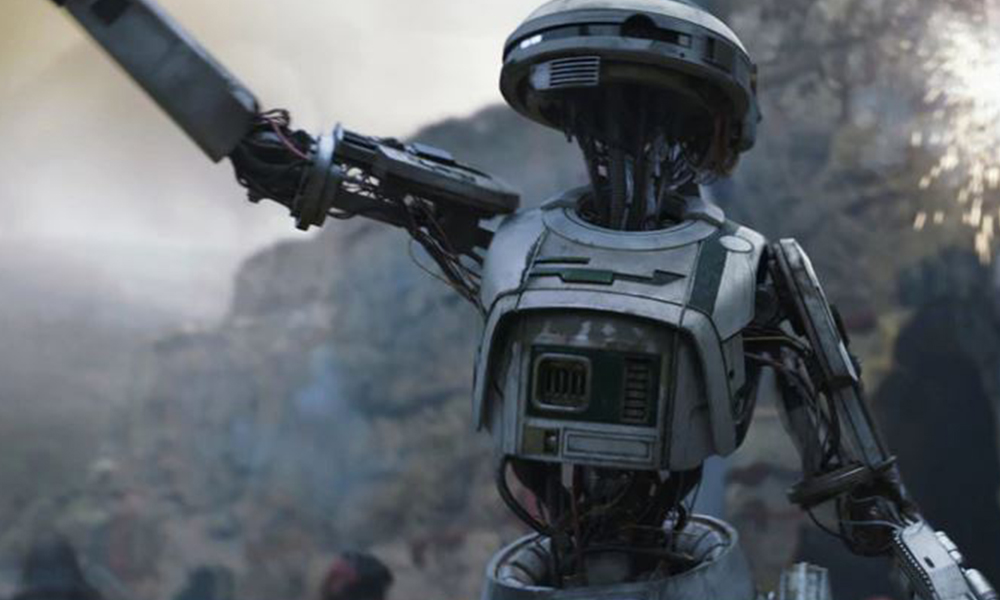