I thought it would be fun.

And, as a volunteer judge for this year’s National Book Critics Circle John Leonard Award (given to an “outstanding first book in any genre”), I did have fun. At least, I had fun doing the reading.

But as the clock ticked toward the 5 p.m. voting deadline on a January afternoon, I sat in my local public library branch clicking and unclicking boxes on the Google form that served as our ballot. I was confronting a crisis of critical confidence, wrestling with those perennial questions of authority, standards, and taste, as well as the unsettlingly arbitrary nature of literary production and prize-giving. I liked almost all of these books. Voting for just one seemed wrong.

In her 2001 book The Forest for the Trees, Betsy Lerner, agent-turned-editor-turned-agent-again, describes one of her first tasks in publishing: writing a reader’s report on an unsolicited manuscript for her superior at the literary agency she’d just joined as an editorial assistant. Lerner labored over a long weekend, teasing apart the themes of the not-very-good book like the diligent grad student she was. Her boss rejected the four-page single-spaced report, asking instead “Did you like it?”

Lerner didn’t. She wrote a simple rejection for the boss to sign.

But the thing that had driven her to spend a couple thousand words and a three-day weekend qualifying and hedging her blunt dislike was the question of authority. Did she have any?

“Who was I, after all, to judge this writer?” Lerner asks, anticipating Pope Francis by a dozen years or so. “Who was I to pass judgment on this Joe Shmo who couldn’t draw a convincing character or punctuate to save his life but who had, after all, written an entire novel?”

Lerner says she lost her “publishing virginity” that day, her first confrontation with the fact that book publishing is something less than a meritocratic enterprise. While prepared to say the book was bad, she hadn’t been prepared to unilaterally snuff out a writer’s dreams — not, at least, without having a superior sign off on the kill.

This year’s Leonard finalists were hardly Lerner’s Shmos. Each had achieved some measure of success: publication, critical acclaim, other awards. But that actually makes the job that much harder. As a paid-up member of the NBCC willing to read each of the six finalists, I was, by the organization’s lights, qualified to cast a ballot. But my month-long, breathless tour of these debuts had me wondering, pace Lerner and the Pope, “who am I to judge?”

As a 39-year-old English professor — white, straight, married with children — who has not yet published a book of his own, I am, demographically, the very model of a modern literary gatekeeper. As such, I tried to be attentive to the various political, gendered, socioeconomic, racial, and ethnic perspectives on offer.

This is not to say I intended an affirmative action program. Rather, that in a prize where the lone criterion — “outstanding” where? Standing out from what? — is fungible, and as such is subject to whim, caprice, mood, and even appetite, I wanted to be mindful of the ways I might be letting familiarity of set, setting, or perspective lead me to favor one writer’s work over another.

Most major prizes are helpfully bounded by genre, giving a judge at least some broad outlines and a canon against which the works in question might be considered. But how does one stack Layli Long Soldier’s book-length poetic interrogation of the United States’ toothless apology to America’s indigenous people up against Carmen Maria Machado’s or Lesley Nneka Arimah’s short stories steeped in magic realism? How do we consider those against Zinzi Clemmons’s autobiographical novel of being a third-culture kid against Julie Buntin’s compelling tragedy of white working class teenagers adrift on Michigan’s Upper Peninsula, or Gabriel Tallent’s disturbing yet beautifully-written tale of violence and incest in Mendocino County?

I couldn’t vote for Tallent’s My Absolute Darling, even though I couldn’t stop reading it. This psychological portrait of a 14-year-old incest victim offered a compelling answer to the question “why not just leave?” (answer: she loves her father, she is in his thrall), but the scenes of rape and physical abuse crossed some ineffable line from “provocative” to “too disturbing to choose.”

It’s 4:50. The NBCC board member in charge of Leonard Prize voting emails with a reminder that there are 10 minutes until the polls close. Other judges must be in the same boat.

With your more prestigious prizes — your Pulitzers, your National Book Awards, even the “main” NBCC awards themselves — there’s a smaller group of judges, usually past winners or otherwise well-regarded writers, who confer over the selection and arrive at some sort of consensus. In this case, each judge decided in isolation. As one vote among several dozen, I wielded a tiny amount of power in the literary-industrial complex, but it was enough to make me break into a sweat at the prospect of the “wrong” decision.

I may have made that wrong decision in dinging Zinzi Clemmons’s What We Lose — the story of a 20-something African-American woman’s loss of her South African-born mother and the navigation of her own early adulthood. I’m a would-be memoirist with a predilection for nonfiction, and when I realized that Clemmons’s book was largely autobiographical, I felt miffed on behalf of memoir. This was just enough for me to drop it below the remaining four candidates.

Unfair? Totally. Critics are inveterate “on-the-other-hand”ers, able to make our own case while acknowledging the validity of other perspectives. Were I to write a review of Clemmons’s book, I’d register my question — why fictionalize? — even as I admired her use of some collage effects (other documents, photographs) to tell a moving story.

But with under 10 minutes to go in this zero-sum game, I have to start making some distinctions, even arbitrary ones.

I click the box for Buntin. Her Marlena provided a truer portrait of white working class anxiety and precariousness than a thousand elegies for the hillbilly. It’s the best novel I’ve read this year.

I click Machado. Her Body and Other Parties was a National Book Award finalist. She’s in residence at the University of Pennsylvania’s Kelly Writers House, where I spent a chunk of my undergraduate career.  I’m aware of the possibility that the hype and the tenuous connection to my old school might be weighing too heavily, even as I unclick.

My cursor hovers near Arimah. Her What it Means When a Man Falls From the Sky dazzled. There were stories that taught me about the Nigerian diaspora in America and some others with a fantasy/sci-fi tinge that hit with the force of a fable. But I read it first (alphabetical order!), and I can’t help but feel that distance has dulled the shine.

I click on Long Soldier. I read Whereas last. This collection faces the ongoing trauma of Native American loss. I’d had a sneaking suspicion that it would appeal to the English professor in me, with its extended interrogation of the text of the United States’ apology to the native population — especially the codicil declaring that nothing in the policy should be construed as having legal force. Long Soldier’s anger is constrained by the form of the resolution, but her words dance all over the extra-wide pages, (re)claiming territory. I read it one sitting, and then again in another sitting.

Am I succumbing to recency bias? Possibly. I click submit.

In an essay published around the same time as Lerner’s book, the writer Tom Bissell describes his own encounter with wielding power in publishing. He “cannot help but imagine that literature is an airplane.” However, instead of “pilots of skill and accomplishment […] the cockpit is empty” and “the controls are abandoned.” To know this, Bissell says, you need “only to touch them to know how mutable our course.”

Everyone who follows contemporary literature knows the feeling of seeing a previously unknown writer start to pop up everywhere. Prizes attract attention, and sometimes more prizes. Success snowballs into success. I wanted to be part of the literary-industrial machinery, but I quailed when it came time to execute my small mission. I was afraid of somehow making the wrong choice. The odds in publishing are so long, the odds of finding yourself in the running for a major award even longer.

My willingness to vote for any of four other books doesn’t really matter to the writers who would remain finalists. If I’d been in a room with my fellow judges, I’m sure I could have been persuaded to vote for Arimah, Buntin, Clemmons, or Machado — who, in the end, won. It would have felt like cover, if we’d all come to a decision together.

Instead, alone, I’d mashed the key for Long Soldier (who did win the NBCC Award for Poetry), staring directly into the maw of the myth of meritocracy. Each book bore merit. Each was “outstanding” in some fashion. Some confluence of taste, interest, and politics led me to vote for Whereas.

The moral? The next time you come across a shiny sticker on a book’s cover boasting some award or other, look up the finalists, too. 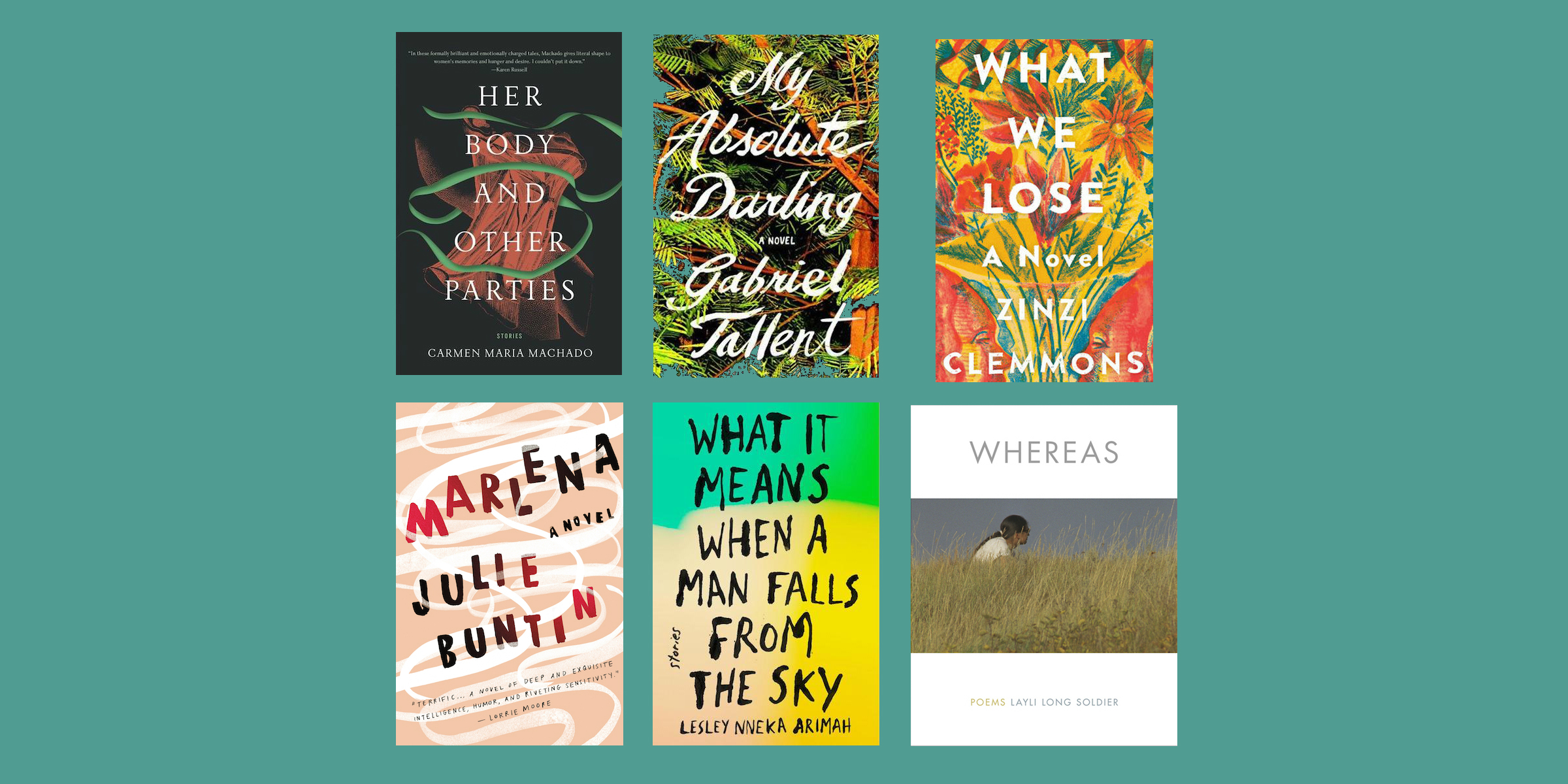